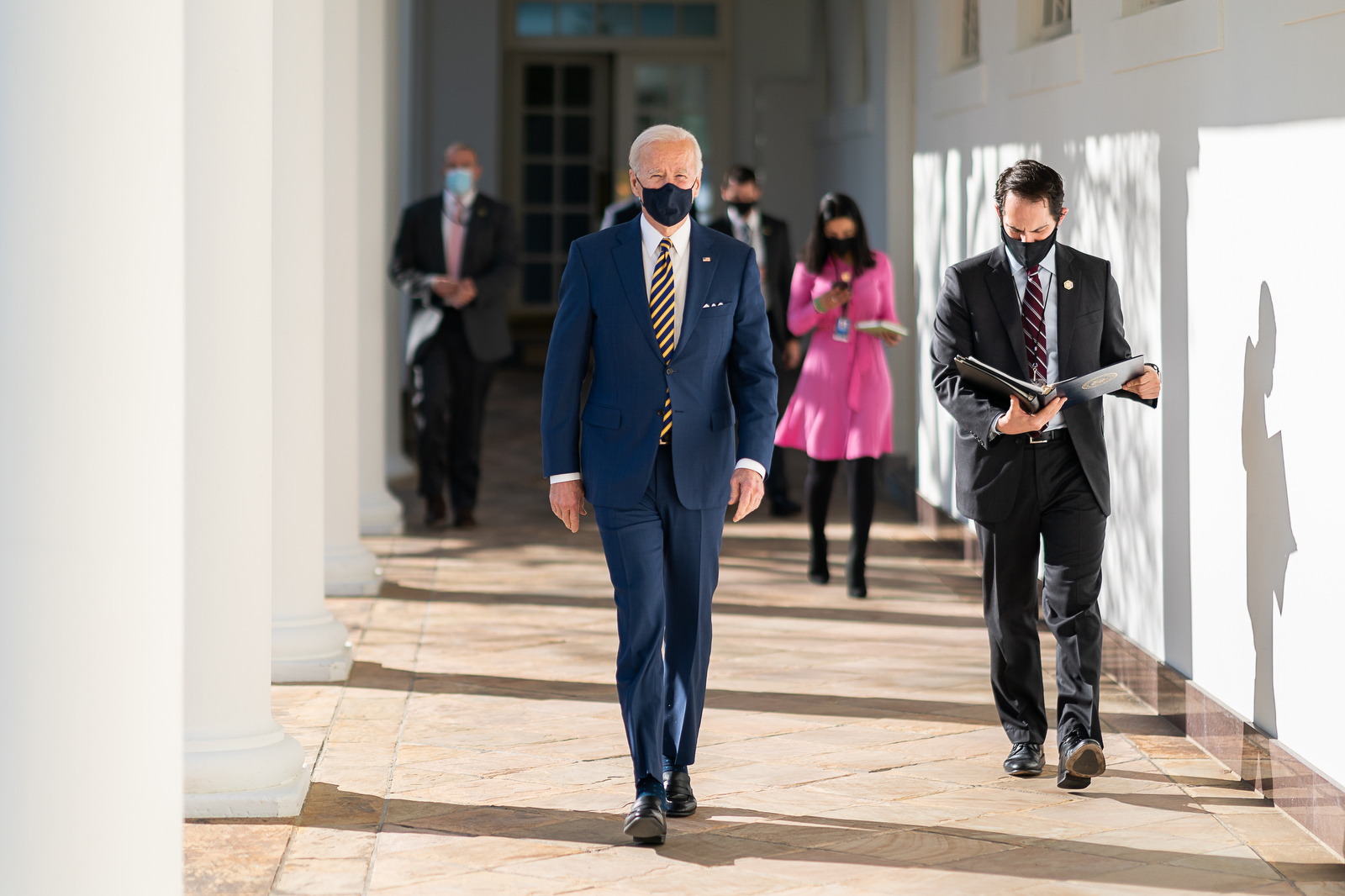 A new CBS News poll finds a 56% majority of Americans would like the Senate to vote to convict President Trump, and the same percentage say he encouraged violence at the Capitol — views that are still somewhat linked to Americans’ presidential votes in 2020, reflecting ongoing partisan division.

As former President Donald Trump’s second Senate impeachment trial is about to begin, a new Gallup poll finds a slim majority of Americans (52%) saying they would like their senators to vote to convict him. Americans tilted against conviction in his first impeachment trial a little over a year ago.

A new HuffPost/YouGov survey finds a 74% majority of Republican and Republican leaning-independent voters say Republican officials should follow Donald Trump going forward, compared to 26% who want to see them go in a different direction.

A new AP-NORC poll finds just 16% of Americans say democracy is working well or extremely well, a pessimism that spans the political spectrum. Nearly half of Americans, 45%, think democracy isn’t functioning properly, while another 38% say it’s working only somewhat well.

A new Monmouth poll finds just 44% of Americans believe our system of government is basically sound while 55% say it is unsound at the current time.

ALABAMA U.S. SENATOR — Sen. Richard Shelby (R-AL) confirmed an earlier report that he will retire when his term ends in 2022, the Washington Post reports. “He becomes the fourth Senate Republican to announce his retirement in 2022, and the race to replace him will become another test for the direction of the GOP in the post-Trump era.”

Rep. Mo Brooks (R-AL) said he is interested in running for the Senate in the wake of  Sen. Richard Shelby’s (R-AL) announcement that he will not seek another term in 2022, The Hill reports.

“Sen. Josh Hawley, the Missouri Republican who raised a fist in support of the pro-Trump mob that stormed the Capitol on Jan. 6, sent an email to supporters Monday in which he sought to fundraise off Trump’s coming Senate impeachment trial,” the Washington Post reports.

From the email: “Even chasing President Trump out of office isn’t enough for them. They have to impeach him AGAIN. They are going after Trump, and they are still coming after me — both of us for the same sin: instead of protecting the elites, I stood up for the people and now I am being threatened every day by Democrats calling for me to be expelled from the Senate, and Joe Biden has echoed that I should be ‘flat beaten.’”

Daily Beast: “In the three months since the election was called for Joe Biden, most of the lawyers and MAGA enthusiasts who decided to play a consequential role in the ex-president’s efforts to overturn the Democratic nominee’s 2020 win (efforts that led directly to the Jan. 6 mob violence), have had their jobs or businesses shredded, their personal lives shaken, or their reputations irrevocably tarnished—all while Trump’s been relaxing and playing his rounds of golf in the Sunshine State. …

“Of this band of MAGA allies (which most prominently included people like Rudy Giuliani, Michael Flynn, Sidney Powell, Lin Wood, Jenna Ellis, Cleta Mitchell, John Eastman, and Peter Navarro), arguably none of them has lost more in the time since the election than Mike Lindell.”

“Griffin’s announcement about his decision to change what office he is seeking in the Republican primary in 2022 comes two weeks after Sarah Huckabee Sanders (R), a former press secretary for the Trump administration, announced her own bid for governor in a campaign video. Former President Donald Trump endorsed Sanders.”

MISSOURI U.S. SENATOR — Former Missouri state Sen. Scott Sifton (D) announced that he will challenge Sen. Roy Blunt (R-MO) in 2022. Two years ago, Sifton told the media that he was preparing for a bid for governor, but he ultimately deferred to the eventual nominee, state Auditor Nicole Galloway.

OHIO U.S. SENATOR — Politico on Ohio Dems hitting the reset button: “They are throwing out plenty of ideas, with varying degrees of difficulty: sever the local campaign from the ‘coastal’ Democratic brand; laser-focus on jobs and the economy to reclaim some lost ground with working-class whites; kindle greater excitement among Black voters to turn out in large numbers and grow the party base.”

“Even if Democrats can rebuild their ravaged bench and mount a strong challenge for Portman’s seat, the national party still has to grapple with how seriously to invest in the nation’s seventh-most-populated state, which was politically closer to Montana than the neighboring swing state of Michigan in the most recent election.”

Meanwhile, Republicans may be getting its first declared Senate candidate before long, as Jane Timken announced Friday that she was stepping down as chair of the state Republican Party and would reveal her future plans “in the coming weeks.” Timken was elected to another term leading the party weeks before Sen. Rob Portman surprised everyone by announcing his retirement, and she soon expressed interest in running to succeed him.

PENNSYLVANIA U.S. SENATOR / GOVERNOR — Some people in politics, especially in Republican politics are a combination of narcissitic sociopaths and deranged paranoids. Consider Montgomery County Commissioner Joe Gale, a Republican who seems to think the hiring of Bruce Castor as a Trump Impeachment lawyer was all about stopping his glorious ascension.

Gale told the Philadelphia Inquirer that Bruce Castor, a former Montgomery County commissioner who’d previously served as district attorney, had been brought on to defend Trump at the behest of “the Pennsylvania GOP swamp.” Um, what?

Gale argued, “Political insiders are in panic-mode that I will run for Governor or U.S. Senate in 2022,” and accused party leaders of “resurrecting” Castor to “offset my growing popularity.” Castor himself was mentioned as a potential candidate for either statewide office after he signed on to help Trump, but he doesn’t appear to have said anything about the idea yet.

FLORIDA GOVERNOR — Democratic state Sen. Annette Taddeo recently told Politico that she was considering a bid against Republican Gov. Ron DeSantis. Taddeo, who is originally from Colombia, argued the party needed candidates who could appeal to Hispanic voters who swung hard towards Trump last year.

Taddeo herself was on the statewide ballot in 2014 as Democratic nominee Charlie Crist’s running mate, but their ticket lost to Republican Gov. Rick Scott 48-47 during that year’s GOP wave. Taddeo went on to lose a close primary for the 26th Congressional District, but she flipped a GOP-held state Senate seat in a closely-watched 2017 special election in the Miami area and was re-elected the following year.

A number of other Democrats are eyeing this race including now-Rep. Crist, who’d been elected to a single term as governor in 2006 when he was still a Republican. Crist also told Politico, “I am seriously considering at this point running for governor in 2022,” a statement that came days after the congressman said he was merely “opening my brain to the idea a little bit more.”

Georgia’s secretary of state has opened a formal investigation into Donald Trump’s efforts to overturn the 2020 election results in the state, Reuters reports.

“The investigation comes after Trump was recorded in a 2 January phone call pressuring Secretary of State Brad Raffensperger to overturn the state’s election results based on false voter fraud claims.”

New York Times: “Findings are typically brought before the Republican-controlled state board of elections, which decides whether to refer them for prosecution to the state attorney general or another agency.”

NEW YORK GOVERNOR — Republican Rep. Tom Reed trashed Democratic Gov. Andrew Cuomo last Thursday, but the congressman refused to answer if he was considering a bid against the incumbent. New York hasn’t elected a Republican to statewide office since George Pataki won his final term as governor in 2002, and Reed, who served as an honorary state chair of Donald Trump’s 2020 campaign, would have a very difficult time breaking that streak.

GEORGIA 7TH CD — 2020 Republican nominee Rich McCormick recently sent out a fundraising email saying that he was considering a rematch against freshman Democratic Rep. Carolyn Bourdeaux next year. McCormick told his would-be donors that he expected GOP mapmakers to create “a Republican-favored district,” adding, “We are following the process closely and should be in a good position to take back the seat and help take back the Congressional House Majority in 2022.”