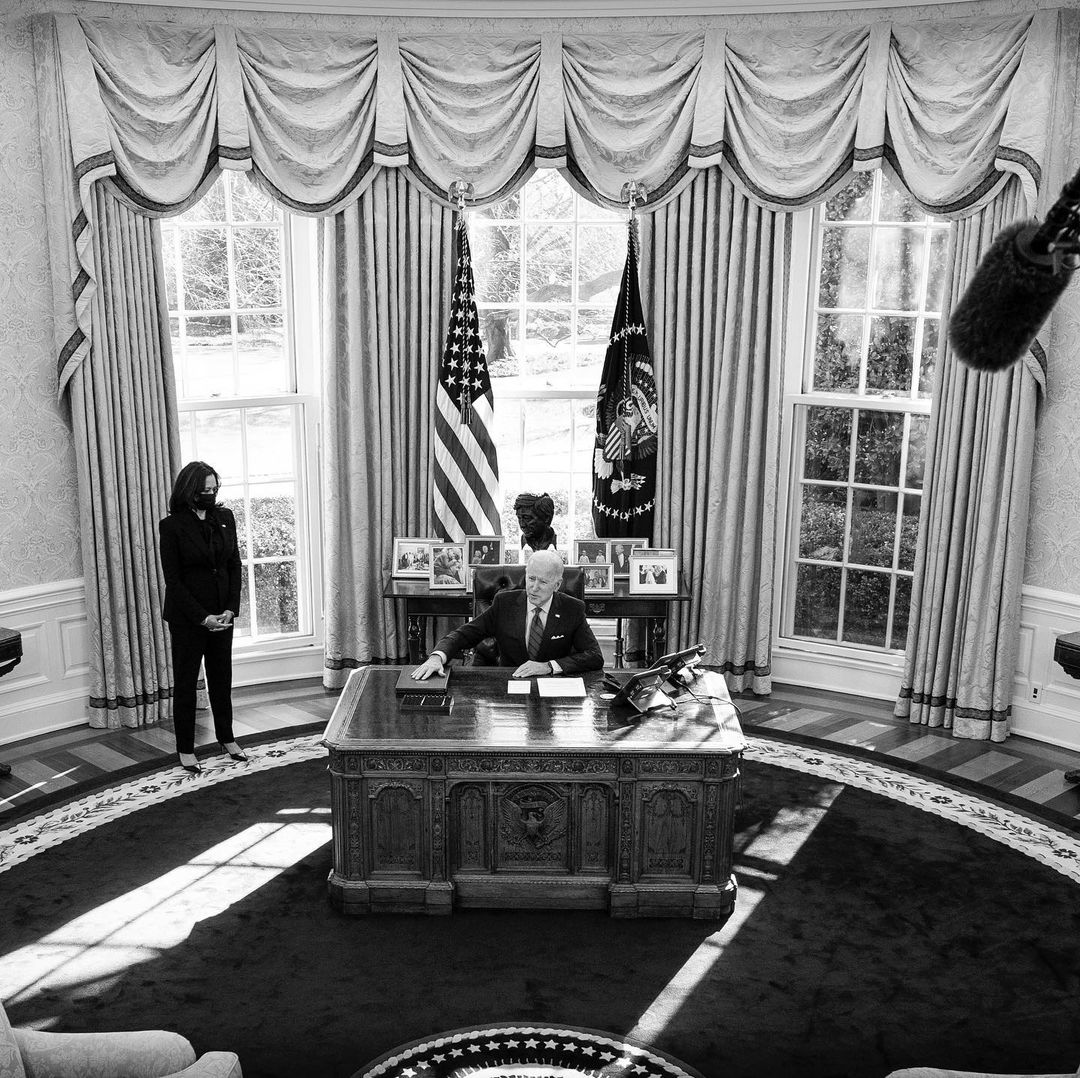 ALL A BIG GRIFT. Donald Trump’s reelection campaign, which never received a cent from the former president, moved an estimated $2.8 million of donor money into the Trump Organization—including at least $81,000 since Trump lost the election, Forbes reports.

“The Trump Organization negotiated on behalf of then-president Donald Trump to make Parler his primary social network, but it had a condition: an ownership stake in return for joining,” BuzzFeed News report.

“The deal was never finalized, but legal experts said the discussions alone, which occurred while Trump was still in office, raise legal concerns with regards to anti-bribery laws.”

“President Donald Trump’s onslaught of falsehoods about the November election misled millions of Americans, undermined faith in the electoral system, sparked a deadly riot — and has now left taxpayers with a large, and growing, bill,” the Washington Post reports.

HUSH MONEY CASE DEAD? “When Donald Trump lost the legal shield of the presidency last month, some pundits speculated federal prosecutors might revive an investigation that implicated him in possible campaign finance crimes during his 2016 run for office,” the AP reports.

“But several people involved in the case say the U.S. attorney’s office in Manhattan has made no move to restart the hush-money probe that once dogged Trump’s presidency and sent his former attorney, Michael Cohen, to prison.”

“The ruling issued just before 11 p.m. ET Friday produced four separate statements by the justices, as well as a convoluted description of what relief various justices would have granted to churches objecting to the limits.”

“However, a majority of the court was only willing to lift the ban California has applied on all indoor worship in Tier 1 counties — those most challenged by Covid-19. The other restrictions remain undisturbed, for now.”

INSURRECTION. New York Times: “New details about what authorities anticipated on Jan. 6 highlight failures to grasp the degree of the threat from pro-Trump right-wing extremists.”

New York Times: “He was one of the most extreme voices in Mr. Trump’s 77-day push to overturn the election, a campaign that will be under scrutiny as the former president’s second impeachment trial gets underway next week. Mr. Flynn went so far as to suggest using the military to rerun the vote in crucial battleground states. At one point, Mr. Trump even floated the idea of bringing Mr. Flynn back into the administration, as chief of staff or possibly F.B.I. director.”

“And now, safely pardoned and free to speak his mind, Mr. Flynn has emerged from the Trump presidency much as he entered it — as the angry outsider who pushes fringe ideas, talks of shadowy conspiracies and is positioning himself as a voice of a far right that, in the wake of the Capitol riot, appears newly, and violently, emboldened.”

Charlie Warzel and Stuart Thompson: “About 40 percent of the phones tracked near the rally stage on the National Mall during the speeches were also found in and around the Capitol during the siege — a clear link between those who’d listened to the president and his allies and then marched on the building.”

“While there were no names or phone numbers in the data, we were once again able to connect dozens of devices to their owners, tying anonymous locations back to names, home addresses, social networks and phone numbers of people in attendance. In one instance, three members of a single family were tracked in the data.”

DOBBS OUT. Fox News has canceled “Lou Dobbs Tonight,” the program hosted by television’s staunchest supporter of Donald Trump and of his assertions of voter fraud in the 2020 election, the Los Angeles Times reports.

The cancellation comes a day after voting software company Smartmatic filed a $2.7 billion defamation suit against Fox News and three of its hosts — Dobbs, Maria Bartiromo and Jeanine Pirro

MINIMUM WAGE AS PART OF THE COVID PACKAGE. “President Joe Biden expressed doubt that his push to increase the minimum wage to $15 an hour would be included in a final coronavirus relief package,” Politico reports.  Biden predicted Senate rules would prevent the increase from going forward: “My guess is it will not be in it. I don’t think it is going to survive.”

MCCARTHY. “House Minority Leader Kevin McCarthy began this week facing perhaps the biggest challenge of his time as leader. He emerged at the end of it having survived but not unscathed. While he has a tighter grip on his conference than before, others in the Republican establishment are concerned about the long-term health of the GOP and have sharply questioned his leadership,” CNN reports.

“McCarthy’s task was to keep an angry, fractious conference together in the face of growing animus toward two very different members — Reps. Liz Cheney and Marjorie Taylor Greene. McCarthy went into the week with one goal: no blood. That meant not taking sides between the establishment and pro-Trump wings of the party. The challenge was to save both wings and keep them unified.”

Politico: “In the end, Cheney easily kept her job, while Greene lost her committee seats when Democrats insisted on holding a vote on her fate. But in the process, the California Republican made clear this week that the post-Trump GOP is a big tent — even if the party turns into a circus at times.”

“How McCarthy has approached this dual set of crises — with a mix of crowd-sourcing and people-pleasing that has become a hallmark of his leadership style — offers a preview of how he plans to navigate what will undoubtedly be tricky internal GOP dynamics over the next two years. So far, he has emerged strengthened among his own members — though at what external political cost, if any, remains to be seen.”

CRAZY GOP. Just days after it was reported that Rep. Lauren Boebert (R-CO) claimed more than $22,000 in mileage reimbursements on her campaign finance filings — which would require driving 38,712 miles — Colorado Newsline reports she recently paid off nearly $20,000 in state tax liens that had accumulated on her restaurant since 2016.

Philip Bump: “By now, a month into the 117th Congress, we can discern three separate but fluid groups within the Republican caucus based on how they’ve voted on key issues. One group we’ll call the Trumpists, and it is made up of those Republicans who declined to impeach Trump, voted against stripping Greene of her committee assignments and backed the effort to overturn the 2020 presidential election by voting against counting the electoral votes submitted by Arizona and/or Pennsylvania.”

“Then there is what we’ll call the accountability caucus, the group of Republicans who voted either to impeach Trump or oust Greene. Those are two very different issues, of course, but each vote demonstrated a willingness to criticize another Republican against the will of party leadership.”

“The third group we can call the pro-democracy Republicans, those who stuck with the party on impeachment and Greene but who also rejected the effort to overturn Trump’s 2020 loss.”

WEEKLY ADDRESSES ARE BACK. New York Times: “President Biden, seeking ways to advance his agenda in a cluttered media landscape, is set to revive a presidential tradition that faded under his predecessor: the weekly radio address.”

“The Biden version is not exactly just a man and his microphone. White House press aides said that some installments could follow a traditional president-talks-to-the-people format, but they were also planning to pair Mr. Biden with everyday Americans and other guests, recreating the informal style of popular podcasts.”

AUSTIN ADDRESSES EXTREMISM. “U.S. Secretary of Defense Lloyd Austin has signed a memo ordering commanding officers and supervisors to hold a one-day ‘stand-down’ to discuss extremism within the armed forces in the next 60 days,” Axios reports.

“After multiple current service members and veterans were arrested for their actions during the deadly Jan. 6 Capitol siege, the Pentagon has increased efforts to combat white supremacy and other forms of extremism in its ranks.”

TRUMP TRADE DEFICIT. “The U.S. trade deficit over the four years of President Donald Trump’s presidency soared to its highest level since 2008, despite his tough tariff tactics intended to bring it down, a new Commerce Department report showed on Friday,” Politico reports.

NFL commissioner Roger Goodell wrote President Biden to tell him that each of the league’s 32 teams “will make its stadium available for mass vaccinations of the general public.”

“Now, only six states are represented by one Republican senator and one Democrat, down from nine in the last Congress and a high of 27 split delegations in 1979.”