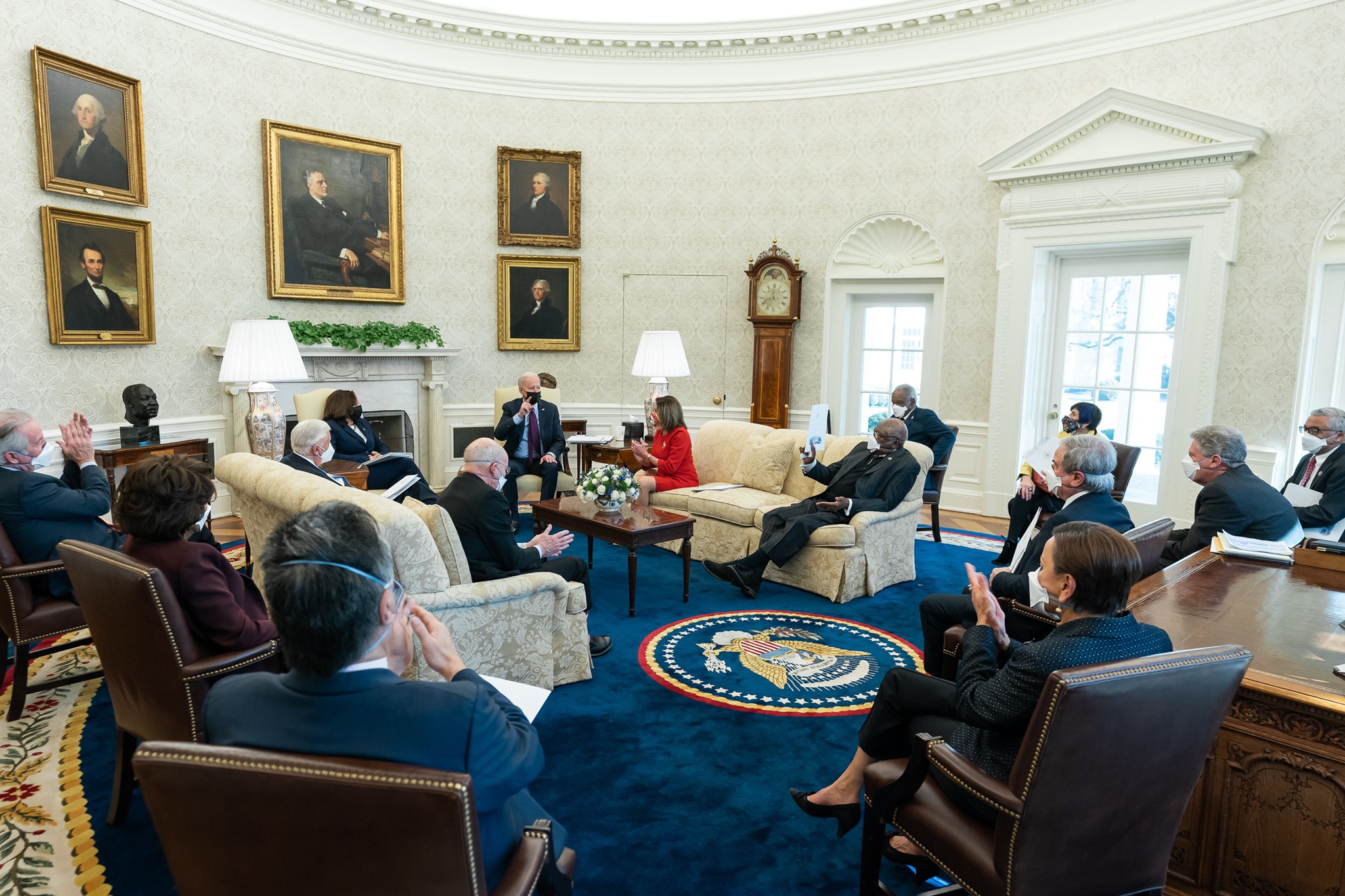 “The Senate approved a budget bill early Friday that paves the way for passage of President Biden’s $1.9 trillion coronavirus relief package, with Vice President Harris casting the tiebreaking vote on the measure that will be key to enacting Biden’s first major legislative initiative,” the Washington Post reports.

“Passage of the budget bill by a 51-to-50 vote came just after 5:30 a.m. Friday, after an all-night Senate session during which senators plowed through dozens of amendments in a chaotic process known as a ‘vote-a-rama.’ Democrats cheered the progress on measures to address the pandemic, while Republicans complained of partisanship and excessive spending.”

“The House voted 219-209 to approve the budget plan, which the Senate had already passed early Friday morning, beginning the process of turning Biden’s stimulus proposal into legislation,” the Washington Post reports.

Larry Summers: “President Biden’s $1.9 trillion covid-19 relief plan, added to the stimulus measure Congress passed in December with the incoming administration’s strong support, would represent the boldest act of macroeconomic stabilization policy in U.S. history. Its ambition, its rejection of austerity orthodoxy and its commitment to reducing economic inequality are all admirable. It is imperative that safety-net measures for those suffering and investments in vaccination and testing be undertaken rapidly after the indefensible delays of the last months of the Trump administration.”

“Yet bold measures need to be accompanied by careful consideration of risks and how they can be mitigated. While the arguments for providing relief to those hurt by the economic fallout of the pandemic, investing in controlling the virus and supporting consumer demand are compelling, much of the policy discussion has not fully reckoned with the magnitude of what is being debated.”

“More than 200 members of the Obama administration urged Congress on Friday not to shrink its stimulus bill in response to Republicans’ criticism about deficit spending, warning that Democrats risked repeating the same mistake they made 12 years ago, amid the last economic crisis,” the New York Times reports.

MINIMUM WAGE. New York Times: “By a voice vote, senators backed an amendment from Senator Joni Ernst, Republican of Iowa, to ‘prohibit the increase of the federal minimum wage during a global pandemic.’ It was a signal that the wage hike would be difficult to pass in an evenly split Senate, where at least one Democrat, Senator Joe Manchin III of West Virginia, is already on record opposing it.”

But of course, the New York Times misses the whole story. Read the Intelligencer article above.

TRUMP TRIAL. Politico: “Allies of former President Donald Trump are imploring his impeachment team to avoid one specific topic when they defend the ex-president at his Senate trial next week: the deadly riot that unfolded at the U.S. Capitol.” Um, how? He is charged with inciting the insurrection that turned fatal and killed and injured police officers. It will be unavoidable.

“President Biden has previously questioned his ability to use executive action to forgive some or all of Americans’ federal student debt. He has instead urged Congress to pass legislation to write off $10,000 in student debt for every borrower.”

IRAN. “In a sign of the urgency President Biden feels about Iran, the White House is convening a National Security Council principals committee meeting Friday focused on the country’s nuclear program,” Axios reports.

“The Biden administration is still refining its strategy about how to resurrect the 2015 deal that President Trump backed out of in 2018, but it wants to work with allies to slow Iran’s effort to enrich uranium and prevent an arms races in the Middle East.”

UNEMPLOYMENT. “More than 1 million Americans filed first-time unemployment claims for the 46th consecutive week last week,” Axios reports.  “There is no historical precedent for the ongoing rate of job losses in the U.S.”

Politico: “More than one in three jobless Americans — or nearly 4 million people — are now classified as long-term unemployed, which the Labor Department defines as being out of work for six months or more. And that total, which is expected to rise again when January jobs data is released on Friday, is likely an undercount: Combined with another 4 million who have stopped searching for work entirely, roughly one in 20 people who were working a year ago have now been shut out of the labor market for more than six months or dropped out altogether.”

“The phenomenon poses an obstacle to the recovery, since the more time a worker spends out of a job, the longer it takes to return to employment, studies show. The fear among many policymakers is that the swelling ranks of the long-term unemployed will have trouble finding jobs even after the vaccine is distributed because they have spent so much time out of work — contributing to a prolonged period of heightened joblessness and, in turn, jeopardizing President Joe Biden’s goals of turning the economy around quickly.”

MTG. One day after the House voted to strip her of her committee assignments, a defiant Rep. Marjorie Taylor Greene (R-GA) “lashed out at Democrats and the media in Capitol Hill remarks in which she called the government tyrannical, said committee seats are a ‘waste of time,’ and declared it her mission to push the Republicans further to the right,” the Washington Post reports.

Greene on Twitter: “I woke up early this morning literally laughing thinking about what a bunch of morons the Democrats (+11) are for giving some one like me free time. In this Democrat tyrannical government, Conservative Republicans have no say on committees anyway. Oh this is going to be fun!”

SECTION 230. Sen. Mark Warner (D-VA) is set to introduce a new bill on Monday that could hold Facebook, Google and other tech giants more directly accountable when viral online posts and videos result in real-world harm, the Washington Post reports.

“The decades-old federal rules help facilitate free expression online, but Democrats including Warner say they also allow the most profitable tech companies to skirt responsibility for hate speech, election disinformation and other dangerous content spreading across the web.”

TRUMP PARDONS. “President Donald Trump’s transactional approach largely sidelined low-level offenders who had been waiting years after filing petitions through the Justice Department and elevated those with personal connections to the White House — or the money to pay someone with those connections,” the Washington Post reports.

“Even Trump allies who advised the White House on clemency say they were startled and disappointed by who was on the final list.”

MANHATTAN DA LOOKING AT BANNON. “The Manhattan District Attorney’s Office is weighing whether to bring a state court case against Stephen K. Bannon, who was indicted on federal fraud charges for his role in a fundraising scheme to build a border wall but received a last-minute pardon from President Donald Trump,” the Washington Post reports.

USA NOW A FLAWED DEMOCRACY. The Economist‘s Global Democracy Index for 2020 downgrades the U.S. to a flawed democracy.

“Warren, who ran for president in 2020 and is known for her aggressive oversight of Wall Street and financial institutions, will remain a member of the Banking Committee.”

TRUMP DHS CHAOS. The Intercept: “Tensions ran so high at the Department of Homeland Security’s oversight wing that one senior official fantasized about Arya Stark, the fictional assassin in Game of Thrones, ‘taking care of’ the agency chief.”

“The investigation, conducted in 2020 by an outside law firm, reveals bureaucratic infighting so bitter that it drove out an agency head and led to an array of startling allegations, including that a high-level official made threatening comments about a concealed weapon during a meeting. The investigation paints a picture of DHS’s Office of Inspector General in chaos.”