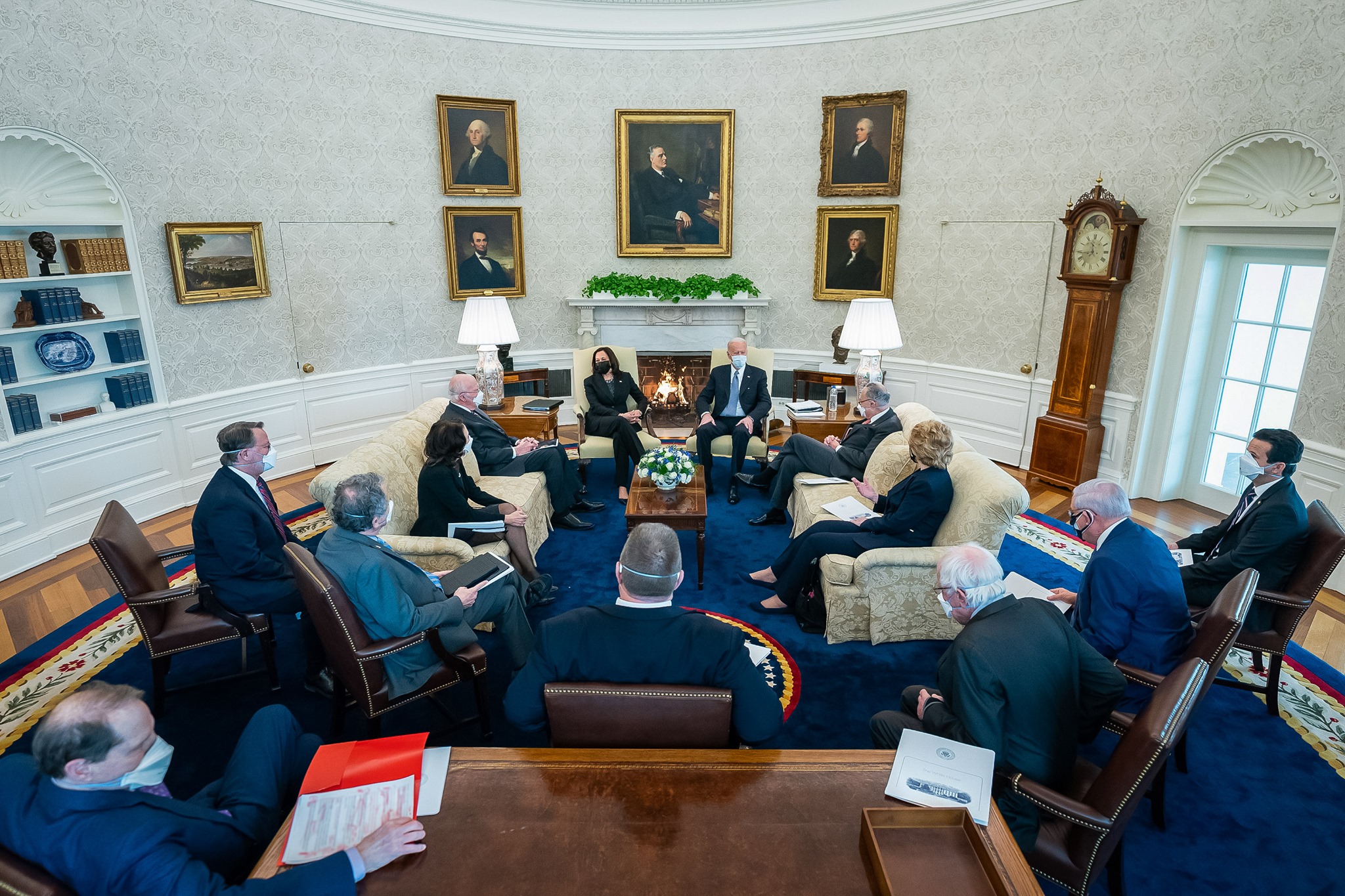 WILL TRUMP TESTIFY? NO. House impeachment manager Jamie Raskin (D-MD) has sent a letter to former President Donald Trump requesting he testify under oath “either before or during the Senate impeachment trial about his conduct on January 6,” CNN reports.

Writes Raskin: “You denied many factual allegations set forth in the article of impeachment. You have thus attempted to put critical facts at issue.”

Former President Donald Trump’s legal team signaled that he will not testify in the Senate impeachment trial, despite the impeachment managers’ request for him to do so.

NOT IF I QUIT YOU FIRST. “Former President Donald Trump parted ways with the Screen Actors Guild in a bombastic letter Thursday as he was facing disciplinary measures with the union,” Politico reports.

“The union’s board voted in January to refer Trump to the union’s disciplinary committee, citing his role in the Jan. 6 Capitol insurrection that left at least six people dead and ‘a reckless campaign of misinformation aimed at discrediting and ultimately threatening the safety of journalists, many of whom are SAG-AFTRA members.’”

Michael Gerson: “Apart from the ethics of the matter, there is a political case to be made for the firm repudiation of dangerous crackpots. As a rule, such people are easy to motivate and organize because they are, well, dangerous crackpots. But American political movements — conservatives in the 1950s and ’60s, liberals in the ’60s and ’70s — suffered from public identification of their cause with radicalism. Presidents Ronald Reagan and Bill Clinton succeeded, in part, by getting beyond scary ideological caricatures of their parties. Does McCarthy really want to fight his campaign for the suburbs with Greene as the face of the GOP?”

“It was beyond good luck that Republicans, after the Capitol assault, were given some dramatic ways to break with violent, anti-democratic radicalism. They had the opportunity to strongly repudiate Greene. And they could convict Trump of inciting an uprising. Now it seems likely that Republicans will throw these chances away. The clowns, it appears, are firmly in charge.”

Rep. Adam Schiff (D-CA) told CBS News that the Republican Party has “become essentially a cult” in recent years, evident from its embrace of President Trump and controversial figures such as Rep. Marjorie Taylor Greene (R-GA).

Said Schiff: “Sadly, it has already become essentially a cult, not just of QAnon, but a whole range of conspiracy theories orbiting around Donald Trump. Which of course is a disaster not only for the Republican Party, but is a disaster for the country. We really rely on two functional parties for our system to work, and right now we don’t have that.”

Rep. Adam Kinzinger (R-IL) told CNN that it was “disappointing by a factor of 1,000” to see Republican colleagues give Rep. Marjorie Taylor Greene (R-GA) a standing ovation after she apologized for her past controversial remarks.

Said Kinzinger: “I don’t like to reveal a ton of conference details, but she stood up and kind of gave a bit of contriteness, but then it pivoted to ‘they’re coming after you next.’”

BIDEN COVID RELIEF. Politico: “Inside the White House, there is a belief that so much of Biden’s agenda is tied to the success of the Covid relief package — the most vital of which is containing the spread of coronavirus — that inaction would cripple the presidency and delay would endanger it. They also view the bill as critical to resolving some of the thornier issues they’ve confronted in their short time in office, including school reopenings, which would be accelerated with a massive resource infusion if the relief bill were to pass.”

“And so, on Wednesday, Biden got more directly involved in the process than he had been at any time prior.”

“President Biden told Republican senators in the Oval Office this week that he has ‘an open door and an open mind’ on his $1.9 billion coronavirus rescue bill. But he has the votes on the Hill and overwhelming support in the country, so he knows he doesn’t have to make any huge compromises,” Axios reports.

“Well, power matters. And Biden holds all of it.”

“The procedural trick that shrinks the vote hurdle from 60 to 51 is often described as ‘a powerful budget tool.’ But reconciliation is also painful to wield. The first agonizing step: enduring a barrage of amendments from Republicans, who have promised to inflict maximal political pain on Democrats during an unbridled evening of ‘vote-a-rama’ on Thursday.”

BIDEN FOREIGN POLICY. “During his first major foreign policy speech, President Biden on Thursday announced an end to U.S. support for offensive operations in Yemen and a freeze on troop redeployments from Germany,” the Washington Post reports.

“President Biden, faced with a range of early foreign policy challenges, [outlined] his vision for an expansion of multilateral engagement with the world and an emphasis on human rights during a State Department visit Thursday,” the Wall Street Journal reports.

MASKS FOR ALL. “The Biden White House is considering sending masks directly to American households,” NBC News reports. “The Covid-19 Response Team is evaluating the logistics of mailing out millions of face coverings, but no decision has been made, and the proposal hasn’t yet reached President Joe Biden for final approval.”

WELCOME BACK REFUGEES. New York Times: “President Biden’s expected announcement on Thursday that he intends to allow more refugees into the United States this year will bring him face to face with a policy barrier left by his predecessor: a gutted resettlement system unable to quickly process the tens of thousands of desperate people whom Mr. Biden would like to let in.”

“Stripped of personnel and weakened by the coronavirus, the government’s refugee program is simply not equipped to welcome a flood of foreigners fleeing disaster, officials and experts said.”

MILITARY EXTREMISTS. “The leader of a private paramilitary group that provided security for Rep. Marjorie Taylor Greene said he has formed alliances with other far-right groups to advocate for Georgia’s secession from the union, following the arrests of participants in the Jan. 6 insurrection at the U.S. Capitol,” the Atlanta Journal Constitution reports.

FOX NEWS LAWSUIT. “A voting technology company swept up in baseless conspiracy theories about the 2020 election filed a monster $2.7 billion lawsuit on Thursday against Fox News, some of the network’s star hosts, and pro-Trump attorneys Rudy Giuliani and Sidney Powell, alleging the parties worked in concert to wage a ‘disinformation campaign” that has jeopardized its very survival,” CNN reports.

HAWLEY. “The face of the Biden resistance is taking shape in the Senate: Josh Hawley,” Politico reports.

“In a prelude to a widely expected 2024 presidential bid, the Missouri Republican is the only senator to oppose every one of President Joe Biden’s Cabinet nominees — a distinction sealed Tuesday when he voted against confirming new Transportation Secretary Pete Buttigieg. Hawley briefly held up the confirmation of another Cabinet official, for the Department of Homeland Security.”

BIDEN DROP INS. Politico: “Since he moved in two weeks ago, Joe Biden has taken to strolling around the White House. He’s popped into the press offices. He’s walked to the East Wing to visit the military office, which handles everything from food service to presidential transportation. And on the day the Senate confirmed his secretary of State, he stopped by the office of Antony Blinken’s wife, White House Cabinet Secretary Evan Ryan, to congratulate their family.”

“Biden has long relished engaging in person — with aides, policy experts, local officials, members of Congress, everyday Americans, you name it — and being sworn in as president hasn’t changed that, according to four people familiar with how he operates. If anything, his desire to visit with staff has only increased as coronavirus precautions have curtailed White House visits and travel around the country.”

VIRGINIA DEATH PENALTY. “Virginia legislators appear poised to abolish the death penalty in the coming days, a step that would make it the first Southern state to end the practice of capital punishment,” The Hill reports.

Said Gov. Ralph Northam (D): “The practice is fundamentally inequitable. It is inhumane. It is ineffective. And we know that in some cases, people on death row have been found innocent.”

Virginia would be the 23rd state to have abolished the death penalty. Colorado legislators did so in 2020.

“To justify those reimbursements, Boebert would have had to drive 38,712 miles while campaigning, despite having no publicly advertised campaign events in March, April or July, and only one in May. Furthermore, because the reimbursements came in two payments — a modest $1,060 at the end of March and $21,200 on Nov. 11 — Boebert would have had to drive 36,870 miles in just over seven months between April 1 and Nov. 11 to justify the second payment.”

BUSH OFFICIALS LEAVE THE GOP. “Dozens of Republicans in former President George W. Bush’s administration are leaving the party, dismayed by a failure of many elected Republicans to disown Donald Trump after his false claims of election fraud sparked a deadly storming of the U.S. Capitol last month,” Reuters reports.

“These officials, some who served in the highest echelons of the Bush administration, said they had hoped that a Trump defeat would lead party leaders to move on from the former president and denounce his baseless claims that the November presidential election was stolen.”

“But with most Republican lawmakers sticking to Trump, these officials say they no longer recognize the party they served.”