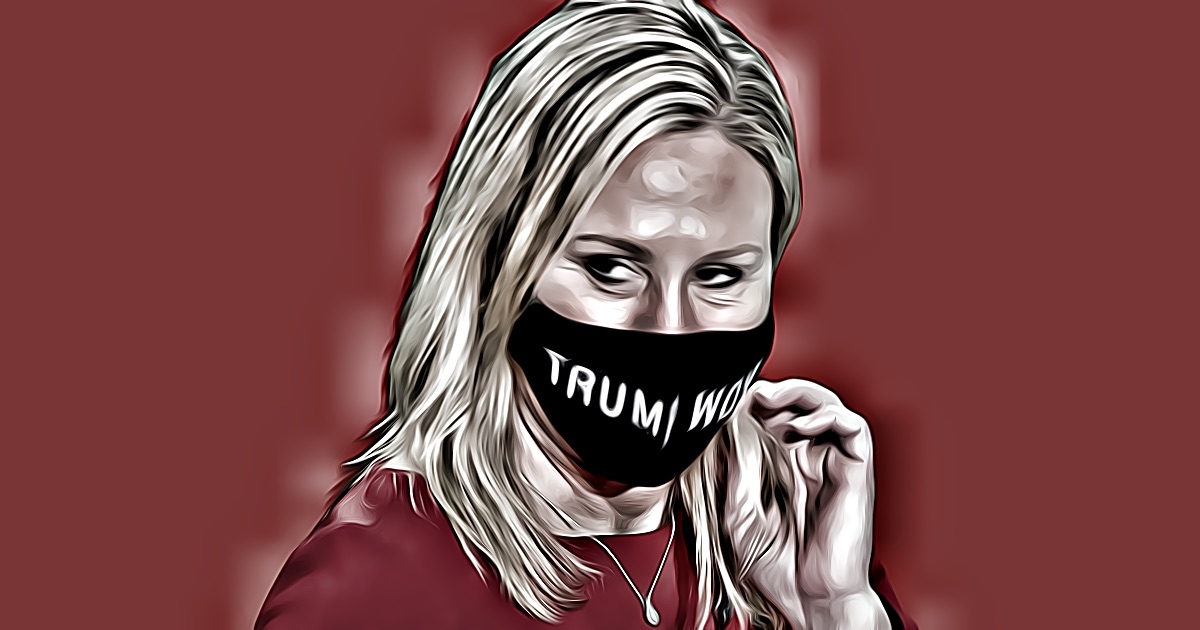 MTG. House Minority Leader Kevin McCarthy (R-CA) condemned comments made by Rep. Marjorie Taylor Greene (R-GA) but stopped short of proposing any action against her. Democrats said they would move to oust Greene from her two House committees — a highly unusual move by the majority targeting a member of the opposing party.

The endorsement of MTG by the Republicans means she is now the leader and face of the Party, and it means all Republicans agree with her and everything she says.

Conspiracist Rep. Marjorie Taylor Greene is far more popular than Rep. Liz Cheney among Americans who align with the Republican Party, according to a new Axios-SurveyMonkey poll. Greene has a net favorable rationing of 28% to 18% (+10) compared to Cheney at 14% to 42% (-28).

Playbook: “If you’re trying to figure out the direction of the Republican Party after Wednesday’s circus of a five-hour (!) House GOP Conference meeting, good luck. One hour, Republicans were rallying around — and literally standing to applaud — the QAnon congresswoman. The next, they voted to protect the avatar of the Republican establishment from Donald Trump cronies itching to boot her from leadership.”

“A day that was supposed to be clarifying was anything but. Yet many House Republicans emerged feeling more confident about their political fortunes — a bit of a mystery to us.”

“How stupid they are. They don’t even realize they’re helping me. I’m pretty amazed at how dumb they are.” — Rep. Marjorie Taylor Greene (R-GA). in an interview with the Washington Examiner, on Democrats planning to force her off House committees for past controversial statements. While it may be true that she is getting publicity, this is an rare Win-Win situation. Democrats win by getting her off committees and by painting the GOP as the party of MTG and Q. And MTG wins by being “aggrieved” and “persecuted.”

Rep. Marjorie Taylor Greene (R-GA) lashed out over a reported proposal to remove her from one of her committees because of her past controversial comments.

Said Greene: “No matter what Kevin McCarthy does it would never be enough for the hate America Democrats. They are only set out to destroy Republicans, your jobs, our economy, your children’s education and lives, steal our freedoms, and erase God’s creation. And the bloodthirsty media are their henchmen who help them by relentlessly attacking anyone in their path.”

“Kevin McCarthy is hugging former President Donald Trump as tightly as he can. Liz Cheney voted to impeach him. But Mitch McConnell isn’t making any sudden movements as House Republicans tear each other apart in Trump’s wake,” Politico reports.

“The Senate minority leader is deferring a final verdict on Trump, even with the opportunity to do so via the president’s forthcoming impeachment trial. McConnell’s strategy reflects the consensus of his fellow Senate Republicans, who have watched uneasily as the House minority leader and conference chair staked out polarizing positions on Trump’s conduct.”

SENATE MAJORITY. After weeks of negotiations, Senate Majority Leader Charles Schumer (D-NY) and Minority Leader Mitch McConnell (R-KY) have come to terms on how to run a 50-50 Senate, The Hill reports. The agreement will allow Senate Democrats to take control of committees, which play a pivotal role in crafting legislation and holding hearings.

INSURRECTION. “The Justice Department is considering whether to charge members of far-right groups involved in the deadly Jan. 6 storming of the Capitol under a federal law usually used against organized crime,” Reuters reports.

“The Racketeer Influenced and Corrupt Organizations Act, known as RICO, enables prosecutors to combat certain ongoing racketeering crimes such as murder, kidnapping, bribery and money laundering. The 1970 statute provides for hefty criminal penalties including up to 20 years in prison and seizure of assets obtained illegally through a criminal enterprise.”

CNN: “Many involved in the insurrection professed to be motivated by patriotism, falsely declaring that Trump was the rightful winner of the election. Yet at least eight of the people who are now facing criminal charges for their involvement in the events at the Capitol did not vote in the November 2020 presidential election.”

Politico: “The House took an unprecedented step Tuesday night, voting to levy hefty fines against colleagues who bypass the recently installed metal detectors that surround the chamber. The reason is simple but speaks to the new reality: lawmakers are afraid of being injured, or worse, by colleagues trying to sneak weapons on to the House floor.”

VISITOR LOGS. “The Biden administration is looking at whether it could make public White House visitor logs from early last month, a step that could reveal whether people connected with the Jan. 6 storming of the Capitol visited 1600 Pennsylvania Avenue,” the Washington Post reports.

“We already know that some of the most prominent people spreading the baseless conspiracy theory that Trump was cheated out of reelection darkened the West Wing’s doorstep in his waning days: My Pillow CEO Mike Lindell, retired general Michael Flynn, and Sidney Powell. But the logs could flesh out more fully who was bending the president’s ear and shaping his mind in the run-up to the deadly Capitol riot.”

BIDEN SAYS GO BIG. President Joe Biden urged House Democrats to “go big, not small” on a new COVID-19 relief package and to stick together as they sell his nearly $2 trillion stimulus plan to the American people, The Hill reports.

Said Biden: “We have to go big, not small. Every major poll shows the American people are with us.”

He added: “I’ll have your back. I ask that you have mine.”

Playbook: “We would add that the Covid package is popular — people like getting hundreds of dollars in the mail! — and the White House is making the calculation that some Republicans will support the final package even if they didn’t influence it much. In 2001, George W. Bush got 58 Senate votes, including 12 Democrats, for his tax cut bill, when he only needed 50 because it was passed via reconciliation.”

Washington Post: “One proposal discussed by senior Democrats includes lowering the threshold for the payments to begin phasing out above $50,000 for single taxpayers, $75,000 for people who file as the heads of households, and $100,000 for married couples… The conversations are fluid and legislation has not been finalized.”

CHINA. 60 Minutes: “For all the polarization that grips Washington, here’s a source of rare consensus: the emerging threat of China’s push to acquire our health care data, including the DNA of American citizens. U.S. officials tell us the communist regime’s aggressive collection of our most personal information presents a danger both to national security and our economy.”

“As alarm bells ring across agencies, parties, and presidential administrations, different branches of government have taken action over the past year to stem the tide of our medical data flowing to China. The quest to control our biodata – and, in turn, control health care’s future – has become the new space race, with more than national pride in the balance.”

IRAN. “Iran tested a new rocket on Monday with improved technology that could be used in its missile program, its latest attempt to raise the stakes for the Biden administration ahead of potential negotiations over a new nuclear deal,” the Wall Street Journal reports.

TRUMP TRIAL. “More than 370 Democratic congressional aides will issue an unusual public appeal on Wednesday, imploring senators — in some cases their own bosses — to convict former President Donald Trump for inciting a violent ‘attack on our workplace’ that threatened the peaceful transition of power,” the New York Times reports.

BuzzFeed News: “Former president Donald Trump formally responded Tuesday to the charges filed by House Democrats in his second impeachment, denying that he incited a mob to violently descend on the US Capitol to stop Congress from certifying President Joe Biden’s win.”

“But court records in the 175-plus criminal cases filed so far in connection with the Jan. 6 insurrection reveal that’s exactly what at least some of Trump’s supporters thought he was directing them to do.”

NO BIDENS ON STAFF. President Joe Biden vowed that no one in his extended family will have sway over government decisions, CNN reports. Said Biden: “We’re going to run this like the Obama-Biden Administration… No one in our family and extended family is going to be involved in any government undertaking or foreign policy. And nobody has an office in this place.”

CANADA DECLARES THE PROUD BOYS TO BE TERRORISTS. “Canada on Wednesday declared the Proud Boys a terrorist entity, adding the far-right group to a list that includes al-Qaeda, ISIS and al-Shabab as part of an effort to crack down on what senior government officials called one of the country’s ‘most serious threats,’” the Washington Post reports.

“If Newsom selects Schiff, chair of the House Intelligence Committee and a confidant of Speaker Nancy Pelosi, House Democrats would lose a powerful party voice in the U.S. House and temporarily give up a seat in their slim 221-211 majority.”

“Nonetheless, Pelosi has given her approval to Schiff’s bid, a clear sign she thinks she can manage without him.”

MyPillow CEO Mike Lindell was shutdown during a must-watch interview with Newsmax.