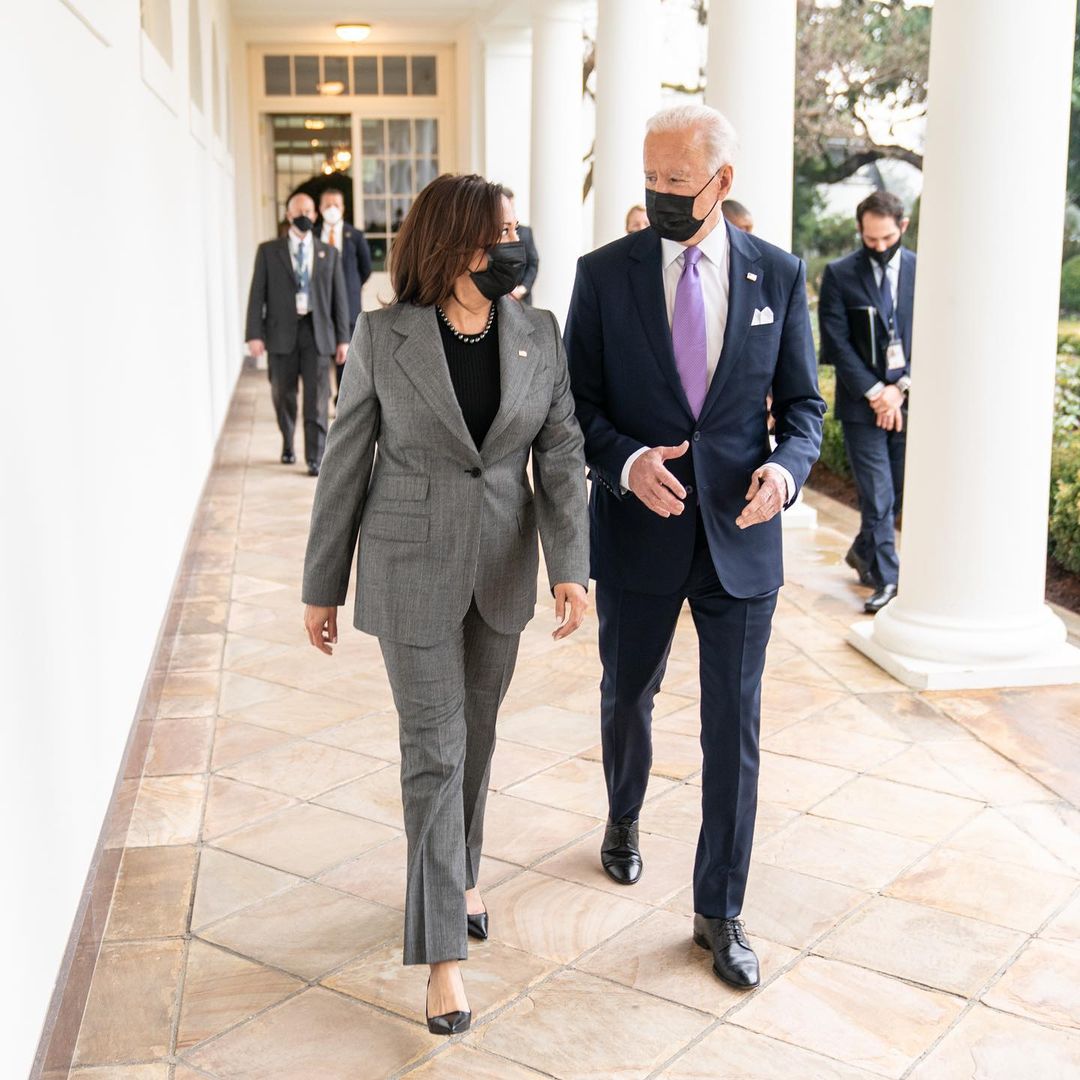 A new Quinnipiac poll finds that two weeks into Joe Biden’s presidency of Joe Biden, a majority of Americans say, 61% to 34%, say that they are generally optimistic about the next four years with Biden as president.

Said pollster Tim Malloy: “Amid a palpable uncertainty about the months and even years ahead, there is a sense that President Biden is the man for the moment. And that moment can’t come too soon.”

“House Democrats are preparing to center their strategy for the far-off midterm elections on a simple, aggressive message: Republicans are the party of QAnon,” Politico reports.

“Making an unusually early move to protect their narrow majority, House Democrats’ campaign arm on Tuesday launched its first TV ad campaign, spotlighting supporters of the fringe conspiracy theory — including those who stormed the Capitol on Jan. 6. It is the first step in a larger plan, orchestrated by the Democratic Congressional Campaign Committee’s new chairman, Sean Patrick Maloney of New York, to exploit the growing friction between Trump hardliners and establishment Republicans in the GOP base, which Maloney sees as a major weak point for the party.”

“Democrats tasked with protecting majorities in the House and Senate are seizing on deep divisions within the Republican Party, hoping that stoking the discord could help them overcome the legacy of losses the party in power usually suffers in midterm elections,” CNN reports.

“The Democratic strategy is two-fold. The party, led by Biden, looks to get the coronavirus pandemic under control and campaign on policy believed to be broadly popular. And Democrats will also attempt to link vulnerable Republicans to some of the most extreme members in their party, hoping to fan the flames of conflict highlighted by far-right members like Reps. Marjorie Taylor Greene and Lauren Boebert.”

“More than half of the no-shows were white, and many lived in rural areas, constituencies that lean toward Republican candidates.”

“Meanwhile, 228,000 new voters cast ballots in the runoffs who hadn’t voted in the Nov. 3 election. They were more racially diverse and younger voters who tend to back Democrats.”

OHIO 11TH CD — Former Democratic state Sen. Nina Turner has legged out to an early fundraising lead for the likely special election in Ohio’s 11th Congressional District, raising $647,000 in the final three weeks of December and finishing the month with $484,000 on hand. Turner’s rivals have all raised far less or announced campaigns after the start of the new year, meaning they were not obligated to file fourth-quarter reports with the FEC.

LOUISIANA 2ND CD — Democratic state Sen. Troy Carter earned an endorsement this week from the state AFL-CIO for the March 20 all-party primary to succeed former Rep. Cedric Richmond, and he also ended 2020 with a large financial edge over his two main intra-party opponents.

FLORIDA 5TH CD — Florida Politics reported Tuesday that Democratic Rep. Al Lawson was considering a bid against Republican Gov. Ron DeSantis, though the congressman has not yet said anything publicly about his interest yet

Lawson would be the Sunshine State’s first Black governor, but he may have a very tough time getting through the primary, much less prevailing in the general election in this light red state. Successful statewide campaigns in Florida require a massive amount of money, but Lawson is anything but a strong fundraiser. Indeed, we wondered in April of 2019 if Lawson was thinking of retiring after he brought in a mere $25 from donors—and no, we’re not missing any zeroes—during the previous three months.

Lawson decided to seek a third term in this safely blue North Florida seat, but he ended up taking just 56% of the vote in the primary against two unheralded opponents. Needless to say, Lawson would have a difficult time in a statewide nomination contest if a large proportion of Democrats at home are not happy with him.

MINNESOTA GOVERNOR — Axios checks in on a few potential Republican candidates for governor, including Sen. Karin Housley, who was the party’s unsuccessful nominee for Senate in 2018 and now says of a possible gubernatorial bid, “We haven’t completely ruled it out.” Meanwhile, state Senate Majority Leader Paul Gazelka, who was previously reported to be considering, says “Ask me in the summer,” after the legislature adjourns.

Further, State Sen. Tom Bakk, a former Democrat who left the party last year to become an independent, didn’t quite rule out an independent run for governor but he sounded pretty glum about the idea and even hinted he might not seek re-election.

NORTH CAROLINA U.S. SENATOR –– Politico reports that former state Supreme Court Chief Justice Cheri Beasley, who lost re-election last year by just 401 votes, is “seriously considering” entering the Democratic primary for next year’s open-seat Senate race. Politico also states that Sen. Sydney Batch and Charlotte Mayor Vi Lyles are potential candidates, and that it is expected that state Attorney General Josh Stein will pass on a Senate bid and instead run for governor in 2024, when Gov. Roy Cooper will be term-limited.

TEXAS 32ND CD — Republican Genevieve Collins, who lost to Democratic Rep. Colin Allred 52-46 last year, has filed paperwork for a possible rematch. Collins does not appear to have said anything publicly about her intentions.

SOUTH CAROLINA 7TH CD –– State Rep. Russell Fry says he’s considering running against Rep. Tom Rice, who was censured by the South Carolina Republican Party over the weekend for voting to impeach Donald Trump. Several other Republicans have floated their names in the past couple of weeks, but the Post and Courier says that Fry, who is chief whip in the state House, “is considered a more serious threat,” calling him “an up-and-comer in state GOP politics” with strong fundraising potential.

NEW JERSEY 7TH CD — State Senate Minority Leader Tom Kean Jr. has announced he will not seek re-election this year, a move that may presage a second congressional bid in 2022. Kean lost 51-49 to Democratic Rep. Tom Malinowski, but the 7th Congressional District supported Joe Biden by a much wider 54-44 margin. District lines, however, are set to shift thanks to redistricting.

GEORGIA 14TH CD — Politico reports that physician John Cowan is considering a rematch against Rep. Marjorie Taylor Greene, who defeated him in last year’s GOP primary runoff 57-43. There’s no direct quote from Cowan about his plans, but he did say, “I’m a neurosurgeon. I diagnose crazy every day. It took five minutes talking to her to realize there were bats in the attic. And then we saw she had skeletons in the closet.” Apparently, Cowan also runs a Halloween pop-up store.

FLORIDA 27TH CD — Former Democratic Rep. Donna Shalala, who lost in an upset last year to Republican María Elvira Salazar, tells the Miami Herald that she’s interested in a rematch but wants to see how redistricting pans out before deciding and would only seek a seat that includes her home in Coral Gables. The paper adds that, according to unnamed sources, Shalala “hopes a Latina will challenge Salazar.” We haven’t heard about any such names that would fit the bill, though the Herald says that state Rep. Nick Duran and Miami Commissioner Ken Russell “are rumored to have interest.”

SOUTH CAROLINA GOVERNOR / 1ST CD — Former Democratic Rep. Joe Cunningham said he would “be sharing my plans for 2022 very soon.” Cunningham hasn’t ruled out a bid for governor or a rematch with Republican Rep. Nancy Mace, who narrowly unseated him last year.

PENNSYLVANIA U.S. SENATOR / 17TH CD — Republican Sean Parnell is reportedly “torn” between seeking Pennsylvania’s open Senate seat next year or running for the House again, which could involve either a rematch with Democratic Rep. Conor Lamb, who defeated him 51-49, or a bid for another House seat depending on how redistricting turns out.

Meanwhile, Kenneth Braithwaite, who served as Donald Trump’s secretary of the Navy, says he’s considering a run for Senate. One unnamed source described Braithwaite as “a little bit Trump-y, a little bit Arlen Specter,” which makes about as much sense as saying you’re a little bit Oscar and a little bit Felix.