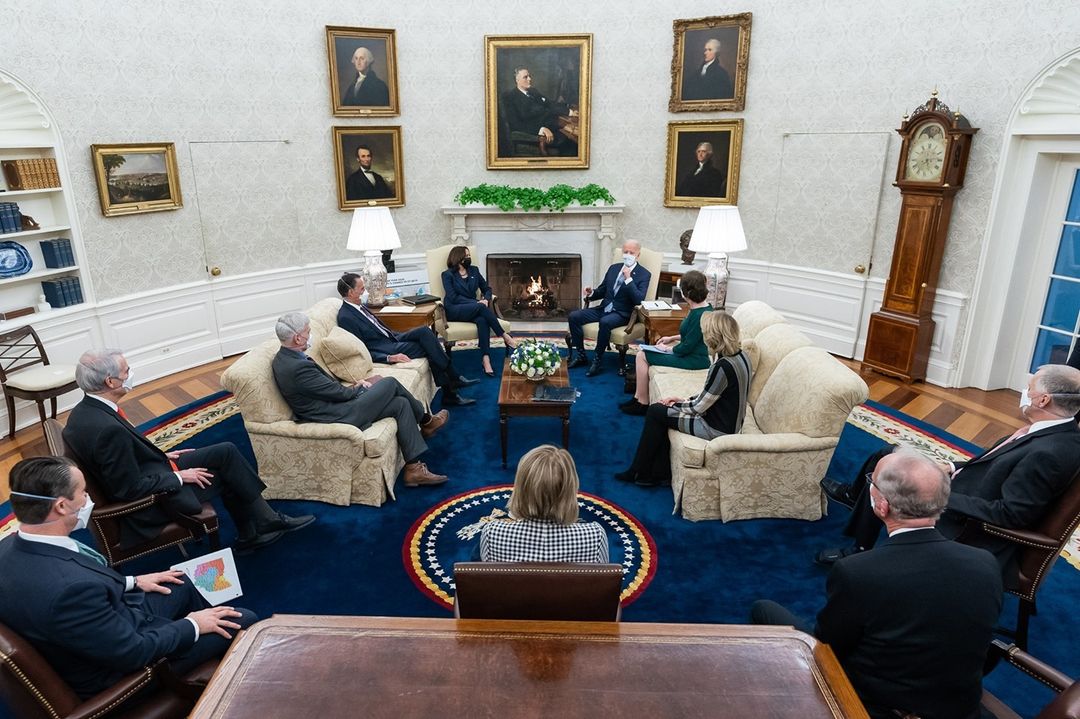 “If Republicans want to come along, great. Democrats are arguing Republicans can vote for budget reconciliation. If Republicans don’t like the plan, they can keep talking to the White House, but the underlying takeaway from the meeting on Monday night — and all the messages from the White House in the days before that — is the President is only willing to negotiate so much. Republicans’ $618 billion proposal with no state and local funding is not going to cut it. Period.”

Sen. Joe Manchin (D-WV) said that he does not support increasing the minimum age to $15 an hour—a critical roadblock to including the proposal in the final coronavirus relief bill, The Hill reports.

“Under the Pay-As-You-Go Act of 2010, known as PAYGO, new laws that raise the national debt automatically trigger offsetting cuts in some safety net programs.”

AOC. Politico: “With Schumer at the helm of the Senate, the prospect of a left-wing challenge next year stands to play a major role in shaping the legislation that comes out of Washington. That applies whether or not Rep. Alexandria Ocasio-Cortez pulls the trigger, at least for the next few months.”

“The two-term congresswoman is seriously considering campaigning for the seat but is so far undecided… Multiple sources said her decision will be contingent on how Schumer wields power with his new Democratic majority in the upcoming months: Will he be pushed around by Mitch McConnell? Or will he work to pass ambitious, progressive legislation favored by the left?”

MTG. Rep. Marjorie Taylor Greene (R-GA) mocked Parkland shooting survivor David Hogg as an “idiot” who “only talks when he is scripted” in a 2019 interview with a Georgia gun group, according to a previously unreported video obtained by NBC News.  Said Greene: “He is very trained. He’s like a dog. He’s completely trained.”

Said McConnell: “Somebody who’s suggested that perhaps no airplane hit the Pentagon on 9/11, that horrifying school shootings were pre-staged, and that the Clintons crashed JFK Jr.’s airplane is not living in reality.”

He added: “This has nothing to do with the challenges facing American families or the robust debates on substance that can strengthen our party.”

McConnell praised Rep. Liz Cheney (R-WY), who has come under fire from Republicans after she voted to impeach Donald Trump for inciting insurrection, CNN reports.

Said McConnell: “Liz Cheney is a leader with deep convictions and the courage to act on them. She is an important leader in our party and in our nation. I am grateful for her service and look forward to continuing to work with her on the crucial issues facing our nation.”

Playbook: “Over the next 48 hours, the fates of two Republican women will be decided for diametrically opposite reasons. One, for espousing dangerous conspiracy theories and endorsing violence against Democratic members of Congress. The other, for daring to impeach Donald Trump for his role in inciting the Jan. 6 riot.”

“Both of these women are expected by their Republican peers to grovel for their sins (real or imagined), which says a ton about the state of the Republican Party right now. And it ain’t pretty…”

“Imagine, however, if the GOP strips Cheney of her leadership post and doesn’t touch Greene. Democrats would have a field day. And Republicans would be tagged as the party of QAnon for the long haul.”

MYANMAR. A video of an fitness instructor in Myanmar working out while a military coup takes place behind her has gone viral.

“Russian opposition activist Alexei Navalny has been sentenced to three-and-a-half years in prison in a case widely seen as an attempt to neutralize President Vladimir Putin’s most prominent critic,” the Financial Times reports.

TRUMP TRIAL. “House Democrats made their case to convict former president Donald Trump of inciting the Jan. 6 riot at the U.S. Capitol in a sweeping impeachment brief filed with the Senate Tuesday that accused Trump of whipping his supporters into a ‘frenzy’ and described him as ‘singularly responsible’ for the mayhem that ensued,” the Washington Post reports.

Said the brief: “If provoking an insurrectionary riot against a Joint Session of Congress after losing an election is not an impeachable offense, it is hard to imagine what would be.”

Former President Donald Trump’s lawyers misspelled “United States Senate” in their opening brief ahead of the impeachment trial next week.

“A constellation of conservative groups that rallied behind former President Donald Trump during his first impeachment is sitting this one out, confident that the outcome is preordained,” Politico reports.

“The groups have gone quiet on social media, eschewing the pro-Trump tweets and calls for action that dominated their Twitter feeds last time Trump was approaching a Senate trial. Others said they are content to watch from the sidelines — opting to preserve their war chests for the 2022 midterm elections — or are still considering if and how they will get involved.”

“After floating the idea last week of filing a motion to censure President Donald Trump, Sen. Tim Kaine (D-VA) said Tuesday he won’t file due to the lack of support from his colleagues,” USA Today reports.

IMMIGRATION. “The Biden administration on Tuesday announced steps to address harm to thousands of families that were separated at the U.S.-Mexico border, expanding efforts to quickly undo relentless changes to immigration policy over the last four years,” the AP reports.

“President Joe Biden planned to sign orders on family separation, border security and legal immigration, bringing to nine the number of executive actions on immigration during his first two weeks in office. Details were thin, but the moves aim to reverse many of former President Donald Trump’s policies to deter immigration, both legal and illegal.”

COVID. “The Biden administration and COVID-19 vaccine producers are actively discussing ways to ramp up manufacturing over the next several months, including partnering with additional pharmaceutical firms to help bottle the vaccine for distribution,” the Daily Beast reports.

“According to two individuals familiar with those conversations, the Biden team has been in talks with several companies about stepping in to help in the fill and finish —the act of filling vials with vaccine— portion of the vaccine manufacturing process.”

PUERTO RICO. “The Biden administration said it would release $1.3 billion in aid that Puerto Rico can use to protect against future climate disasters, and is starting to remove some restrictions put in place by the Trump administration on spending that was to help the island after Hurricane Maria in 2017,” the New York Times reports.

LINDSAY GRAHAM. Sen. Lindsey Graham (R-SC) cautioned Democrats in a Fox News interview against calling witnesses to testify in the impeachment trial of former President Donald Trump for incitement of his supporters’ deadly Jan. 6 attack on the U.S. Capitol.

Said Graham: “You open up Pandora’s box if you call one witness. I hope we don’t call any and we vote and get this trial over next week when it starts.”

BIDEN WINS OVER THE LEFT. Mehdi Hassan: “During the Democratic presidential primaries, I was one of Biden’s fiercest critics on the left… The former vice president, I averred, ‘would be a disaster.’ Well… maybe… perhaps… I was wrong. There, I said it. The new president has been far from a disaster.”

“The lesson is that the most important thing that any movement can do is influence the direction of a major political party. If the center of gravity of a party moves, the entire establishment moves with it. So it is that Biden, who has never been woke or surrounded himself with radicals, is attempting to deliver victories to the left-wing of his party almost unimaginable eight or 12 years ago — and do it quickly.”