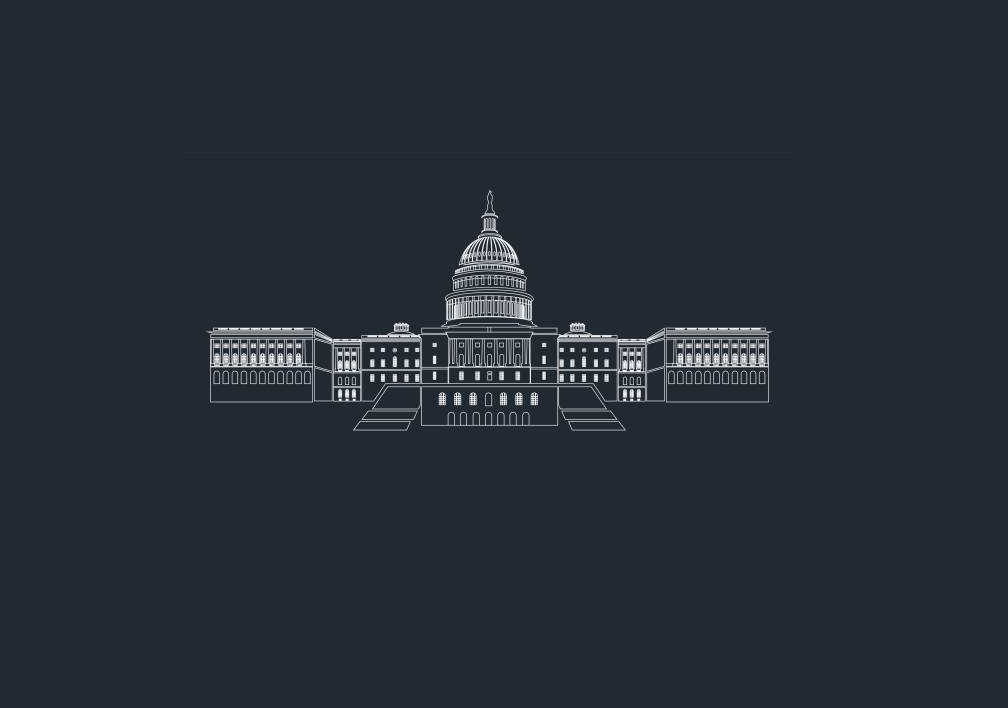 “When asked about the 20 policies that define President Biden’s agenda, more Americans support than oppose all 20 of them,” according to a new Yahoo News/YouGov poll.

“The margins are decisive. The majority of Biden’s proposals garner at least twice as much support as opposition. Nearly half are favored by more than 60 percent of Americans.”

Key takeaway: “Of all 20 policies covered by the poll, the two most popular were the ones at the center of Biden’s current COVID proposal: $2,000 relief checks (74% favor vs. 13% oppose) and increased federal funding for vaccination (69% favor vs. 17% oppose).”

“January was Sen. Josh Hawley’s best fundraising month—by far—since his 2018 election, with a flood of small-dollar donations more than eclipsing the corporate cash he lost after leading an effort to block certification of President Biden’s Electoral College win,” Axios reports.

“Corporate PACs cut ties with the Missouri Republican after the Capitol insurrection that followed the Hawley-led gambit. But his grassroots fundraising bonanza in the weeks after shows the GOP base still firmly in Hawley’s camp.”

CALIFORNIA GOVERNOR — California Gov. Gavin Newsom’s approval rating has plummeted to just 46% as the public sours on his pandemic management, according to a new Berkeley Institute of Governmental Studies poll.

Politico: “Those findings put the Democratic governor in a precarious place as he confronts the possibility of a recall election fueled by anger over the governor’s pandemic response.”

“If it makes the ballot, Newsom’s support is tepid: just 45 percent of voters said they would vote to retain him, with 36 percent backing removal and about a fifth of voters undecided.”

Former San Diego Mayor Kevin Faulconer (R) formally announced that he is running for California governor, either in the regularly scheduled 2022 election or in a possible recall election of incumbent Gavin Newsom (D) later this year, the San Diego Union Tribune reports.

However, if he’s thinking about running in a recall, which is looking more and more likely to take place, the relatively moderate Faulconer just got some unwelcome news. Conservative businessman John Cox, who got obliterated by Newsom 62-38 in 2018, says he’ll run again if there’s a recall, in which voters would be faced with two questions. On one, they’d be asked if they want to recall Newsom. On another, they’d vote for the candidate they’d like to replace Newsom in the event a majority vote “yes” on the first question.

That second question, however, would feature all candidates from all parties running together on a single ballot, with the first-place finisher victorious no matter how small a plurality they might win (again, only if “yes” prevails on the recall question). If two prominent Republican candidates were to split the vote, whatever hope the GOP might have of victory would be small indeed—unless Democrats happened to do the same.

“West Virginia Sen. Joe Manchin and Arizona Sen. Kyrsten Sinema — who aren’t up for reelection until 2024 — are the first Democrats on their target list.”

“As Republicans splinter over how to deal with Representative Marjorie Taylor Greene, the QAnon devotee from Georgia who peddles an array of false conspiracy theories, Democrats are seizing on the infighting to make her the avatar for an array of G.O.P. lawmakers,” the New York Times reports.

“The Democratic Congressional Campaign Committee on Tuesday began a $500,000 advertising campaign on television and online tying eight House Republicans, including Representative Kevin McCarthy of California, the minority leader, to Ms. Greene and QAnon, an effort to force them to make a public affirmation about Ms. Greene.”

OHIO U.S. SENATOR — “Rep. Tim Ryan (D-OH) plans to run for his state’s open Senate seat, Democrats who have spoken with him said, a bid that would test whether even a Democrat with roots in the blue-collar Youngstown region and close ties to organized labor can win in the increasingly Republican state,” the New York Times reports.

“He is expected to declare his candidacy by the beginning of March.”

The Wall Street Journal reported on Friday that wealthy businessman Bernie Moreno is “likely” to seek the Republican nomination to succeed retiring GOP Rep. Rob Portman, and Moreno acknowledged his interest when asked. “I [do] not have any new information to share,” Moreno told WYKC, before continuing, “As you can imagine, this is a monumental decision for my family and it’s important for me to make certain they are 100% on board.” The Journal describes Moreno as “an active donor in recent years,” but not “well known in national Republican circles.”

The paper added that businessman Vivek Ramaswamy, who is the founder of the healthcare company Roivant Sciences, is also considering for Team Red. Ramaswamy himself told the Cincinnati Business Journal last week that he was being encouraged, and while he didn’t explicitly say he was interested, he added, “It’s important that the right candidate runs.”

Forbes estimated Ramaswamy’s net worth at $400 million in 2016, so he’d likely be able to do at least some self-funding if he wanted. Ramaswamy, who is the author of an upcoming tome called “Woke Inc.,” has spent the last several weeks attacking social media companies for banning Donald Trump following the Jan. 6 attack on the Capitol.

CNBC also says that unnamed “power brokers in Ohio” have been trying to recruit a business leader more to their liking in order to stop a pro-Trump candidate from winning, but so far, they don’t seem to be having much luck. Alex Fischer, the head of the business advocacy group The Columbus Partnership, and venture capitalist Mark Kvamme were both approached about possible GOP primary bids, but each has publicly said no. Additionally, state Attorney General Dave Yost said Monday that he’d seek re-election rather than run for the Senate.

On the Democratic side, CNBC reported that businesswoman Nancy Kramer has been “approached” by these anti-Trump leaders, but there’s no word on her interest.

“Former President Donald Trump and the Republican Party leveraged false claims of voter fraud and promises to overturn the election to raise more than a quarter-billion dollars in November and December as hundreds of thousands of trusting supporters listened and opened their wallets,” the New York Times reports.

“But the Trump campaign spent only a tiny fraction of its haul on lawyers and other legal bills related to those claims. Instead, Mr. Trump and the G.O.P. stored away much of the money — $175 million or so — even as they continued to issue breathless, aggressive and often misleading appeals for cash that promised it would help with recounts, the rooting out of election fraud and even the Republican candidates’ chances in the two Senate runoff races in Georgia.”

“Former President Donald Trump has blamed the election results on unfounded claims of fraud and malfeasance. But at the top levels of his campaign, a detailed autopsy report that circulated among his political aides paints a far different — and more critical — portrait of what led to his defeat,” Politico reports.

“The post-mortem says the former president suffered from voter perception that he wasn’t honest or trustworthy and that he was crushed by disapproval of his handling of the coronavirus pandemic. And while Trump spread baseless accusations of ballot-stuffing in heavily Black cities, the report notes that he was done in by hemorrhaging support from white voters.”

“Some of the organizers of the Jan. 6 Trump rally that led to the deadly storming of the Capitol are planning another series of events across the country, along with a recruiting effort to attract 2022 primary challengers against Republicans who they say ‘betrayed’ former President Donald Trump,” ABC News reports.

From the organizers: “To date we’ve identified 13 unlucky Republicans up for reelection in 2022 who MUST BE DEFEATED. We will be visiting each of their districts to recruit and vet primary challengers in the coming months.”

“Democrats in Nevada are making a play to bump Iowa and New Hampshire from their early spots on the presidential primary calendar. If successful, it would upend decades of political tradition and give a more urban and racially diverse group of voters a greater say in picking the party’s nominee,” the AP reports.

MARYLAND GOVERNOR — Former RNC chair Michael Steele, who somehow is still a Republican after turning into a fierce critic not only of Donald Trump but of the GOP in general, said on Friday that he plans to take “a very strong, long look” at running for governor. How exactly he might win a Republican primary, however—especially after endorsing Joe Biden last year—is a mystery. “I know I’m not everyone’s favorite cup of tea within my party,” said Steele. “I don’t let those things bother me.” Problem is that these things bother GOP voters, i.e., the folks who matter to Steele’s future dreams.

WISCONSIN U.S. SENATOR — Politico notes that Republican Sen. Ron Johnson, who has yet to say whether he’ll seek a third term next year, raised very little money for his campaign account in the final quarter of 2020, especially when compared with other senators who are likely to face difficult re-election campaigns, like Arizona Democrat Mark Kelly. However, Johnson’s FEC report in the fourth quarter of 2014 looked almost exactly the same, and he went on to win again two years later.

NEW YORK U.S. SENATOR AND GOVERNOR — Rep. Alexandria Ocasio-Cortez is “seriously considering” a primary challenge to Senate Majority Leader Chuck Schumer, according to Politico, but these same people say her decision will be governed by how aggressively Schumer pushes progressive priorities from his new perch. A spokesperson for Ocasio-Cortez didn’t rule out the possibility, saying only that the congresswoman is focused on addressing the coronavirus pandemic.

Politico also reports that some Schumer allies think Ocasio-Cortez “is more likely” to run for governor or lieutenant governor, though it’s not clear why they’d be in any position to know what AOC is planning. A gubernatorial bid would of course set her on a collision course in next year’s Democratic primary with Gov. Andrew Cuomo, who has already said he plans to seek a fourth term in 2022.

The lieutenant governorship would be a strange choice, though, as the post is almost entirely powerless in New York. Going that route could create a bizarre spectacle, however: If Ocasio-Cortez were to defeat Cuomo’s preferred choice in the primary (possible current Lt. Gov. Kathy Hochul, who hasn’t yet announced her plans), she and Cuomo would be flung together on the same general election ticket—the political equivalent of a shotgun wedding.

Politico also name-drops a few other possible Schumer challengers, including Reps. Jamaal Bowman and Mondaire Jones, Public Advocate Jumaane Williams, and state Sen. Alessandra Biaggi. A Bowman aide, however, said the congressman is not considering the race, while Williams and Jones did not comment. Biaggi, however, did not rule out the idea, only saying that she wasn’t thinking about a bid “at this very moment” but would “certainly have to revisit it.” In 2018, Biaggi defeated state Sen. Jeff Klein, a powerful Cuomo ally who ran the faction of breakaway Senate Democrats known as the IDC, in that year’s Democratic primary.