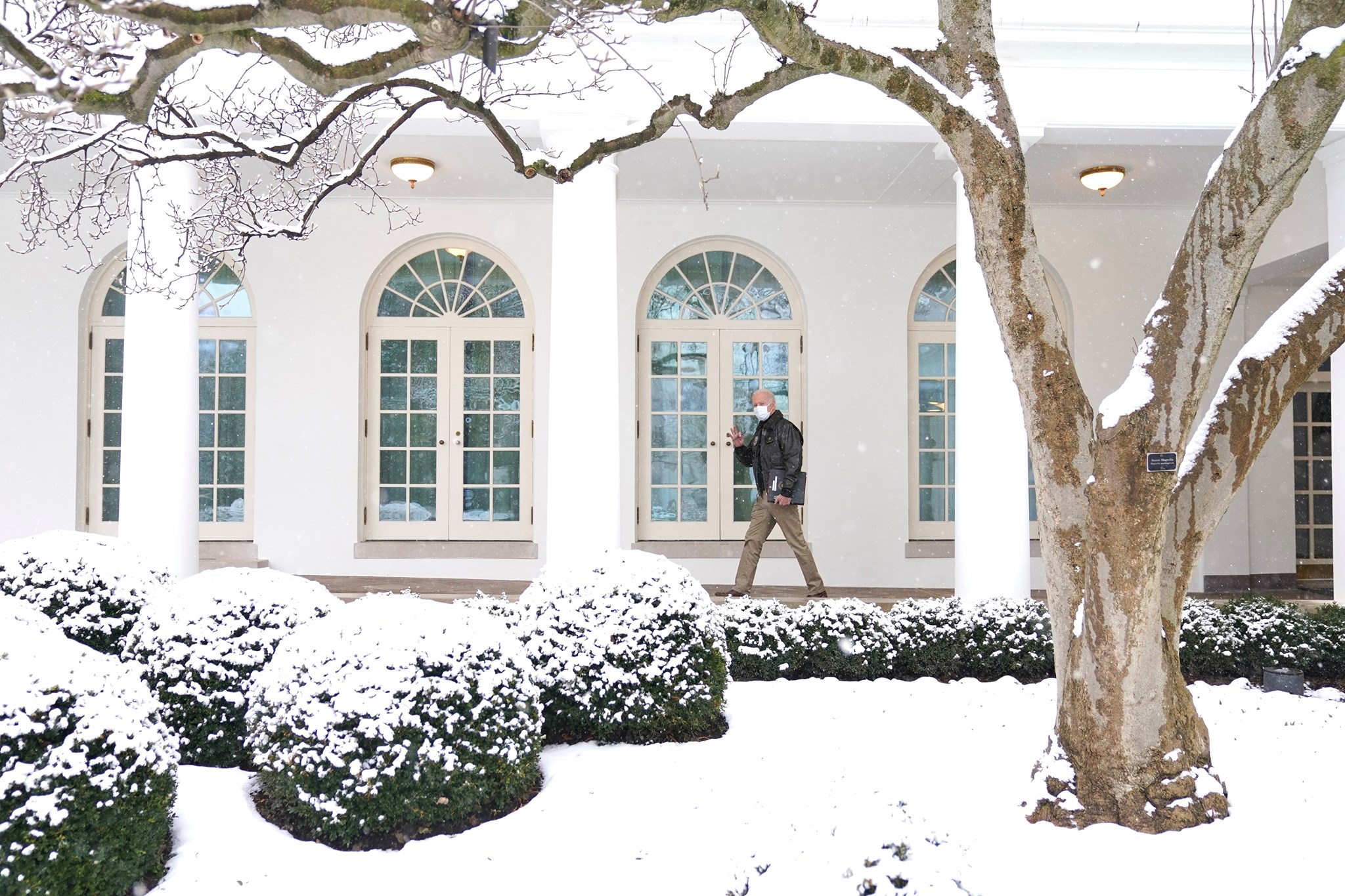 “Joe Biden’s presidency is just 13 days old, but he’s already facing his biggest legislative decision yet,” NBC News reports. “Do Democrats go alone to pass the White House’s $1.9 trillion Covid-19 relief bill?” “Or — to achieve a bipartisan deal with 10 GOP senators — does he set his eyes on a smaller-sized package?”

I will let Republican Governor Jim Justice answer: “We can’t hold back… Trying to be per se fiscally responsible at this point in time with what we’ve got going on in this country. If we actually throw away some money right now, so what?” — West Virginia Gov. Jim Justice (R), calling for a big stimulus package in a CNN interview.

So screw any beltway pundit or Republican hypocrite clutching their pearls and pulling out the fainting couches over the concern for bipartisanship. Go it alone, pass a big package, and fuck the Republicans.

“Joe Biden ran as a unifying centrist destined to be in conflict with activist liberals. Turns out, Biden is governing as an activist liberal constrained by centrists,” Axios reports. “Biden has outlined the most liberal agenda in a generation.”

“On top of Biden’s expansive agenda, add Speaker Pelosi — a progressive who always wants to go big, and is thinking about her legacy — and Senate Majority Leader Chuck Schumer, who worries about a primary from his left.”

Arkansas Gov. Asa Hutchinson (R) said the distribution of the coronavirus vaccine has been “seamless” under the administration of President Joe Biden, the AP reports.

Said Hutchison: “In terms of the vaccine distribution, it’s been seamless. And I was delighted that we had a 14% increase in vaccine supply last week. This is going to be very, very important for us.”

“The outreach comes after Harris’ apparent move to apply pressure on Manchin frustrated the conservative Democrat, something that he made clear over the weekend.”

House Majority Leader Steny Hoyer (D-MD) is planning to deliver an ultimatum to House Minority Leader Kevin McCarthy (R-CA) this week: Either Republicans move on their own to strip Rep. Marjorie Taylor Greene (R-GA) of her committee assignments within 72 hours or Democrats will bring the issue to the House floor, Politico reports.

Charlie Sykes: “If Democrats force a vote on expelling Rep. Marjorie Taylor Greene or stripping her committee assignments, the number of GOP congressmen who will back the QAnon crazy lady will be roughly the same number who opposed impeachment. It will be the overwhelming majority of the GOP caucus.”

“Republicans are already rehearsing their excuses and rationalizations. But the reality is that the post-Trump/forever Trump GOP simply no longer has the antibodies to fight off the contagion of crazy.”

“A healthy political party actually cares about truth. It is concerned about its credibility and can distinguish a difference of opinion from the insane rantings of a deranged conspiracist. But the GOP is not a healthy party; over the last four years it has morphed into a cult, where believing lies and celebrating ‘fighting,’ have become rituals of admission.”

Politico: “What the GOP decides to do about Liz Cheney and Marjorie Taylor Greene will offer significant clues about the direction of the party in the post-Trump era. Some Republicans are warning that punishing Cheney while letting Greene go untouched — and thereby aligning the party even more closely to Trump — could be a major black eye for the party heading into 2022.”

Politico: “This is what a nightmare scenario looks like. With the party reeling in the wake of its 2020 unraveling — when it lost too many centrist voters — state Republicans now worry Greene will emerge as the face of the GOP, tainting the entire ticket with a stamp of conspiracy theory and extremism in the run-up to the 2022 midterms.”

“Georgia Republicans expect Greene will face a primary challenge, and some hope she could somehow be drawn into a tougher seat during redistricting. But they acknowledge she’s popular in her district. Greene’s primary opponent in 2020, John Cowan, is considering running against her again.”

“If you have any common sense, you know she’s an anchor on the party. She is weighing us down.”  — Georgia GOP elections official Gabriel Sterling, quoted by Politico, on Rep. Marjorie Taylor Greene (R-GA).

As the New York Times points out, the refusal of GOP leaders “to take action is yet another example of how Republican leaders have allowed those forces to fester and strengthen.”

Tim Miller: “They would avert their gaze when Trump would retweet QAnon accounts or tell the proud boys to ‘stand back and stand by.’ They would try to tiptoe around the crazy, expressing concern about the ‘deep state’ or by attacking the elitist media for not taking the supposedly legitimate but unspecified concerns of their constituents seriously. They’d tell reporters on background that they were ‘uneasy’ about what was happening but not actually do anything about it. They’d offer strained equivalences pointing to ‘something something AOC’ rather than address the termites eating away at their own mansion.”

Joel Valdez, an aide to Rep. Matt Gaetz (R-FL), is seen on video cheering on Capitol rioters as they overran police, Gizmodo reports.

“Metadata from Valdez’s video, which Pro Publica published last week but did not connect to Gaetz’s press assistant, reveals it was taken at roughly 1:14 p.m. ET that day. The rioters had by that time already breached at least three police barricades and forced officers back onto the Capitol steps where they violently engaged.”

Rep. Marjorie Taylor Greene (R-GA) said on Monday that she would soon be visiting former President Donald Trump at his Mar-a-Lago estate in Florida, Politico reports.

“U.S. economic growth will recover ‘rapidly’ and the labor market will return to full strength quicker than expected thanks to the vaccine rollout and a barrage of legislation enacted in 2020, according to a government forecast published Monday,” CNBC reports.

“Importantly, the CBO said its rosier projections do not assume any new stimulus, including President Joe Biden’s $1.9 trillion plan.”

Politico: “The crisis in Myanmar, also known as Burma, is unfolding just days after President Joe Biden took office, and in some ways it challenges the very heart of Biden’s foreign policy vision. The new president has promised to stand up for democracy and human rights around the world, including against communist-led China.”

“A Myanmar military coup would derail significant progress the Asian country has made toward democracy in recent years. The country’s armed forces have also been accused of genocide and other atrocities against minority groups. At the same time, one reason the United States has encouraged democracy in Myanmar is to draw it out of the orbit of China, its neighbor to the northeast. According to reports from the region, the Myanmar military has taken into custody several top civilian leaders, including Aung San Suu Kyi.”

CNN: Protesters throughout the country had gathered for the second weekend in a row to support jailed opposition leader Alexey Navalny, who has been held by Russian authorities since mid-January. More than 5,000 people were detained in at least 85 cities as of late Sunday, according to the independent monitoring group OVD-Info — a record since 2011. In Moscow, the capital, more than 1,600 people were arrested, including Navalny’s wife Yulia, though she was later released.”

New York Times: “From the populist right to the socialist left, the rush by both parties to side with young traders disrupting the markets reflects the broad recognition of the impulses driving American politics.”

New Yorker: “Trump transformed immigration through hundreds of quiet measures. Can they be uncovered and reversed?”

“One of Vice President Kamala Harris’ first tasks in office could very well be her most important: getting skeptical communities — mainly people of color — to put the Covid-19 vaccine in their arms,” Politico reports.

“The task falls on her for an obvious reason. She’s the highest ranking and most visible person of color in the federal government, and the African American community has been among the most skeptical of any about getting the Covid vaccine.”

“The administration has a plan to deploy Harris to spread awareness and boost confidence among a group of people who are also some of the most at risk of infection. It’s a lofty but uncertain goal, complicated by Harris’ difficulty earning support within the Black community during her primary run.”

“U.S. voting rights activist and Democratic Party politician Stacey Abrams has been nominated for this year’s Nobel Peace Prize for her work to promote nonviolent change via the ballot box,” Reuters reports.

Former White House senior adviser Jared Kushner and his deputy, Avi Berkowitz, were nominated on Sunday for the Nobel Peace Prize for their role in negotiating four normalization deals between Israel and Arab nations known as the “Abraham Accords,” Reuters reports.  They were nominated by law professor Alan Dershowitz.

Said McDaniel: “When I saw some of the things Sidney was saying, without proof, I certainly was concerned it was happening in my building. There are a whole host of issues we had to deal with — what is the liability of the RNC, if these allegations are made and unfounded?”

The Scottish Parliament will hold a vote this week into whether the government should pursue an “unexplained wealth order” to investigate the source of financing for Donald Trump’s Scottish resorts, The Scotsman reports.

“In Georgia, Arizona and other states won by President Biden, some leading Republicans stood up in November to make what, in any other year, would be an unremarkable statement: The race is over. And we lost, fair and square,” the New York Times reports.

“But that was then. Now, in statehouses nationwide, Republicans who echoed former President Donald J. Trump’s baseless claims of rampant fraud are proposing to make it harder to vote next time — ostensibly to convince the very voters who believed them that elections can be trusted again. And even some colleagues who defended the legitimacy of the November vote are joining them.”

“Republican lawmakers in statehouses across the country are moving swiftly to attack some of the voting methods that fueled the highest turnout for a presidential election in 50 years,” the AP reports.

“Although most legislative sessions are just getting underway, the Brennan Center for Justice, a public policy institute, has already tallied more than 100 bills in 28 states meant to restrict voting access. More than a third of those proposals are aimed at limiting mail voting, while other bills seek to strengthen voter ID requirements and registration processes, as well as allow for more aggressive means to remove people from voter rolls.”