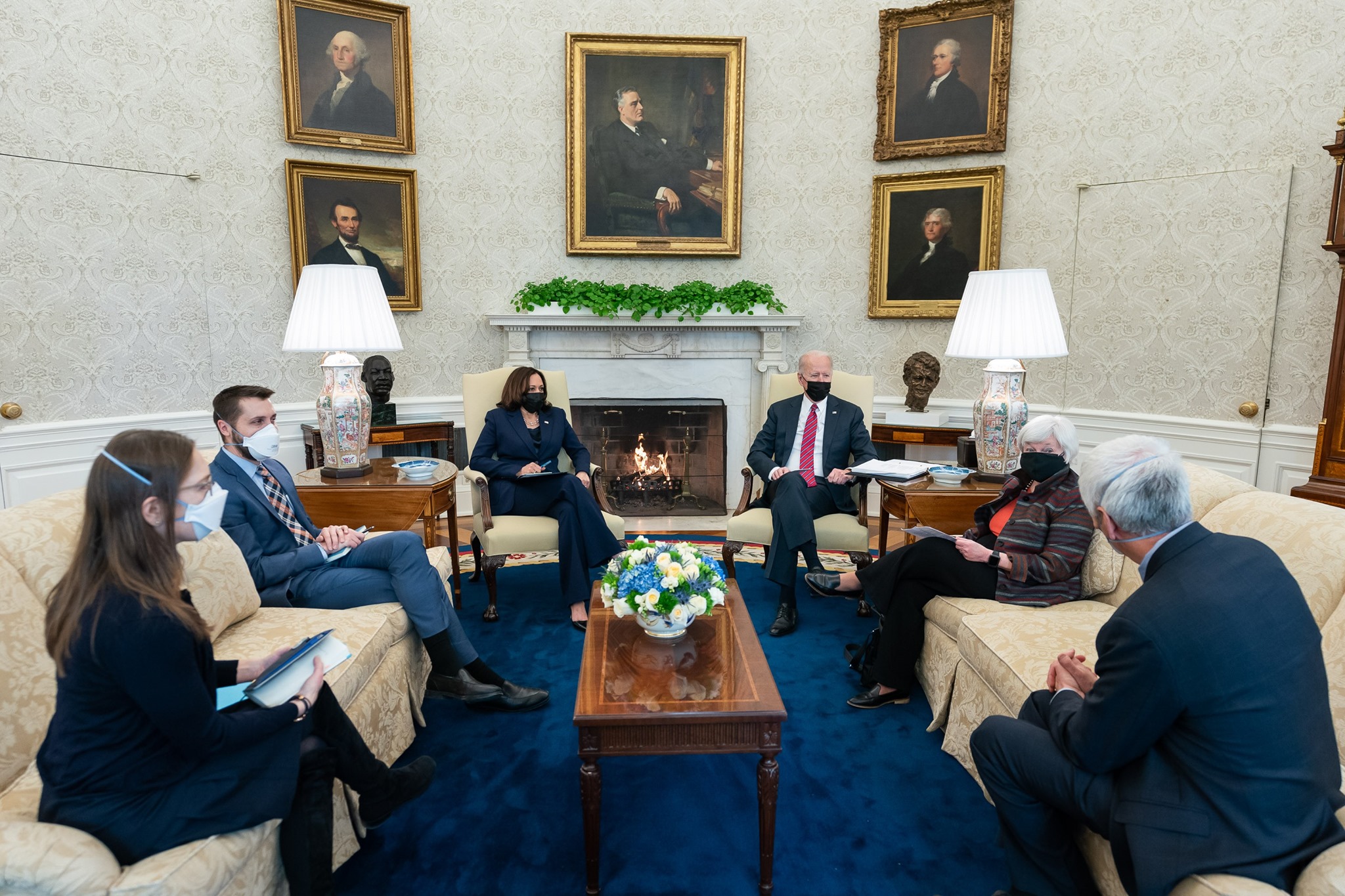 “In the weeks before taking office, President Biden and his aides spent time digging into books about Franklin D. Roosevelt, both biographies and volumes exploring his iconic first 100 days, on the theory that no president since then has taken office with the country in a crisis quite so grave,” the New York Times reports.

“They devised their own opening-days blitz by essentially compressing 100 days into 10. Mr. Biden has now signed about 45 executive orders, memorandums or proclamations enacting or at least initiating major policy shifts on a wide array of issues, including the coronavirus pandemic, racial justice, immigration, climate change and transgender rights.”

“But if Mr. Biden has gotten off to the fastest start of any president since Roosevelt, the speed bumps ahead threaten to drain his momentum. He heads into a more grinding February featuring contentious legislative negotiations over his $1.9 trillion coronavirus relief package, a molasseslike process to confirm the rest of his senior team and the unwelcome and unpredictable distraction of a Senate impeachment trial of his predecessor.”

“A week and a half into Joe Biden’s presidency, Democrats are adopting a more muscular approach to dealing with Republicans, essentially declaring they will work with them if they can but are prepared move past them if they must,” the Washington Post reports.

“Many Democrats are concluding that Republicans are unlikely to work with them and that waiting for them to do so would be a mistake. Biden seems to be heeding that argument to some degree.”

In a newly discovered video from a December 19 “Stop the Steal” rally in Arizona, organizer Ali Alexander bragged about being “on the phone” with “people from the White House” and appeared to encourage physical violence against members of Congress and other politicians who he claimed helped “steal” the election, Media Matters reports.

At that same rally, Alexander appeared to advocate for physical attacks against members of Congress who he said helped “steal” the election, calling it a “moral obligation” to do so.

Text messages and an event-planning memo obtained by ProPublica indicate that Caroline Wren, a Washington insider with a low public profile who worked for Donald Trump Jr.’s girlfriend, Kimberly Guilfoyle, played an extensive role in managing operations for the January 6 rally that preceded the Capitol riot.

“The records show that Wren oversaw logistics, budgeting, funding and messaging for the Jan. 6 rally that featured President Donald Trump.”

“House Democrats have sought out new cellphone footage of the Capitol siege as well as updated details about injured police officers as they seek to build an emotionally compelling impeachment case against former president Donald Trump,” the Washington Post reports.

“The goal is to present the Senate with fresh evidence that reveals what Trump knew in advance of the Jan. 6 rampage at the Capitol, as well as how his words and actions influenced those who participated.”

“The effort to present new video evidence and witness testimony appears designed to make Republican senators as uncomfortable as possible as they prepare to vote to acquit Trump, as most have indicated they will do. The prospect of injured police officers describing the brutality of pro-Trump rioters to Republicans who regularly present themselves as advocates of law enforcement could make for an extraordinary, nationally televised scene.”

Rep. Marjorie Taylor Greene (R-GA) has “created a dilemma for Republican leaders, who for months have been unwilling to publicly rebuke or punish her in any way for her inflammatory statements, in part for fear of alienating voters delighted by her incendiary brand of politics and conspiratorial beliefs,” the New York Times reports.

“After avoiding the issue for months in the hope that it would resolve itself, Republicans are now facing calls from Democrats to expel Ms. Greene from Congress, pressure from a prominent group of Jewish Republicans to discipline her, and private consternation from within their own ranks.”

“Their reticence to take action is yet another example of how Republican leaders have allowed those forces to fester and strengthen.”

Washington Post: “While some Republicans have tried to portray Marjorie Taylor Greene as a political anomaly, her ascent demonstrates the extent to which key party leaders embraced her and propelled her to victory despite her well-documented history of spreading false claims and violent rhetoric. Critical to Greene’s success was the early intervention on her behalf by some of the party’s most staunchly pro-Trump figures and Greene’s ability to tap into the far-right online world where baseless claims thrive.”

Rep. Marjorie Taylor Greene (R-GA) said Saturday that she spoke with former President Trump as she faces growing bipartisan criticism over past social media posts in which she expressed support for violence against Democrats, The Hill reports.

Said Greene: “I had a GREAT call with my all time favorite POTUS, President Trump! I’m so grateful for his support and more importantly the people of this country are absolutely 100% loyal to him because he is 100% loyal to the people and America First.”

Financial Times: “Nationally, India’s new confirmed coronavirus infections have fallen precipitously, from a peak of nearly 100,000 new infections a day in mid-September to an average of 13,000 to 14,000 a day last week. At the same time, health surveys indicate that there could have been much higher public exposure to the virus than was previously realized.”

“At a time when many other countries are battling second and third waves and alarming new variants of coronavirus, the drop in infections raises a tantalizing prospect — has the pandemic started to burn itself out in India? Some doctors and researchers are beginning to speculate that India’s crowded cities may be approaching the early stages of natural ‘herd immunity’ — even before a vaccine is widely available — causing the spread of the pathogen to abruptly lose steam.”

“The Democratic push to raise the federal minimum wage to $15 an hour has emerged as an early flashpoint in the fight for a $1.9 trillion COVID-19 relief package, testing President Joe Biden’s ability to bridge Washington’s partisan divides as he pursues his first major legislative victory,” the AP reports.

“Biden called for a $15 hourly minimum wage during his campaign and has followed through by hitching it to a measure that, among other things, calls for $1,400 stimulus checks and $130 billion to help schools reopen.”

“His team arrived at the White House with a 200-page response plan ready to roll out. But instead, they have spent much of the last week trying to wrap their hands around the mushrooming crisis — a process officials acknowledge has been humbling, and triggered a concerted effort to temper expectations about how quickly they might get the nation back to normal.”

“After a week on the job, Biden’s team is still trying to locate upwards of 20 million vaccine doses that have been sent to states — a mystery that has hampered plans to speed up the national vaccination effort.”

Associated Press: “The Pentagon on Thursday said the Taliban’s refusal to meet commitments to reduce violence in Afghanistan is raising questions about whether all U.S. troops will be able to leave by May as required under the peace agreement.”

“The rally in Washington’s Ellipse that preceded the Jan. 6 riot at the U.S. Capitol was arranged and funded by a small group including a top Trump campaign fundraiser and donor facilitated by far-right show host Alex Jones,” the Wall Street Journal reports.

“Mr. Jones personally pledged more than $50,000 in seed money for a planned Jan. 6 event in exchange for a guaranteed ‘top speaking slot of his choice.’”

“Mr. Jones also helped arrange for Julie Jenkins Fancelli, a prominent donor to the Trump campaign and heiress to the Publix Super Markets Inc. chain, to commit about $300,000 through a top fundraising official for former President Trump’s 2020 campaign, according to organizers. Her money paid for the lion’s share of the roughly $500,000 rally at the Ellipse where Mr. Trump spoke.”

Frank Bruni: “It’s a measure of the Republican Party’s current depravity that I think of the period when Marco Rubio was besmirching Donald Trump’s genitalia as the good old days.”

“I tried for four years to be a ‘Never Trumper’ in the Republican Party but it’s obvious now, everyone is paying homage to this ex-president. No one will stand up to him… Well, I’m a Texan and I don’t lick anyone’s boots.” — Longtime GOP donor Jacob Monty, telling CNN he’s no longer a Republican.

The Charlotte Observer chastised Rep. Madison Cawthorn (R-NC), calling him an “embarrassment to the institution, to his party, and to his state” and urging him to “stay away from the cameras.”

The South Carolina Republican Party executive committee has voted to censure Rep. Tom Rice (R-SC) over his vote to impeach Donald Trump for inciting insurrection at the U.S. Capitol, the Columbia State reports.

Alex Burns: “So far the only people to be censured by any entity over the 1/6 attack are Republicans who voted for impeachment.”