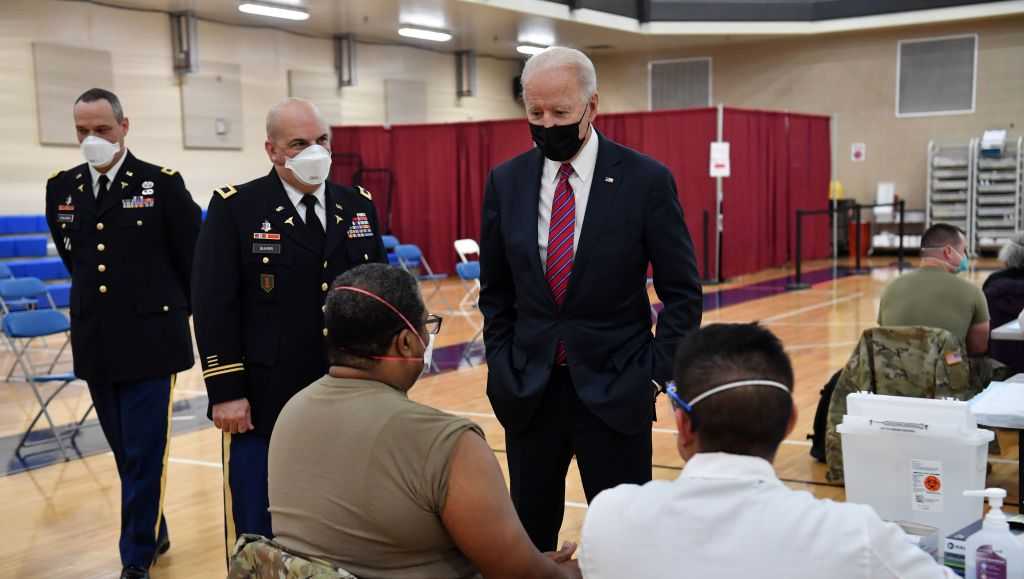 Politico: “Some House lawmakers are privately refusing to work with each other. Others are afraid to be in the same room. Two members almost got into a fist fight on the floor. And the speaker of the House is warning that ‘the enemy is within.’ … Forget Joe Biden’s calls for unity. Members of Congress couldn’t be further divided.”

“We’re in it. We just haven’t started shooting at each other yet.”

— Rep. Paul Gosar (R-AZ), quote by the New York Times, when asked about if the United States was headed for a civil war.

Former Defense Secretary James Mattis said the Jan. 6 assault on the Capitol was “fomented” by former President Donald Trump, and exemplified the “internal threats” faced by the U.S. that should be viewed “with every bit as much gravity as the external problems, and perhaps more so,” Yahoo News reports

“The Pentagon has suspended the processing of a number of former President Donald Trump’s last-minute appointees to defense advisory boards as the new administration looks to weed out loyalists to the former president,” Politico reports.

“The move effectively prevents a number of Trump allies, including his 2016 campaign manager Corey Lewandoski and deputy campaign manager David Bossie, from actually serving on panels tasked with providing advice to the defense secretary, at least for the time being.”

New York Times: “The Pentagon is considering sending active-duty troops to large, federally run coronavirus vaccine centers, a major departure for the department and the first significant sign that the Biden administration is moving to take more control of a program that states are struggling to manage.

“The Federal Emergency Management Agency is hoping to set up roughly 100 vaccine sites nationwide as early as next month, and on Wednesday night requested that the Pentagon send help to support the effort. The sites, and the use of the military within them, would require the approval of state governments.”

“The two pipe bombs that were discovered on Jan. 6 near the U.S. Capitol shortly before a mob stormed the building are believed to have been planted the night before,” the Washington Post reports.

“The explosive devices, which were placed blocks from one another at the headquarters of the Republican and Democratic national committees, have been largely overshadowed by the violent insurrection at the Capitol. But finding the person suspected of planting both bombs remains a priority for federal authorities, who last week boosted the reward for tips leading to the person’s arrest from $50,000 to $75,000.”

The Upshot: “The administration’s proposal, when combined with the $900 billion in pandemic aid agreed to in December, would amount to a bigger surge of spending, both in absolute terms and relative to the depth of the nation’s economic hole, than has been attempted in modern American history.

“Mr. Biden’s proposal — or even more limited versions of it that appear to have a better shot of winning congressional approval — would pump enough money into the economy to, in effect, intentionally overheat it. Or at minimum it would push the limits of how fast the American economy can rev.”

New York Times: “While much has been said about how people descend into this world, little is known about how they get out. Those who do leave are often filled with shame. Sometimes their addiction was so severe that they have become estranged from family and friends.”

“The theories seem crazy to [Lenka] Perron now, but looking back, she understands how they drew her in. They were comforting, a way to get her bearings in a chaotic world that felt increasingly unequal and rigged against middle-class people like her. … The theories were fiction, but they hooked into an emotional vulnerability that sprang from something real. For Ms. Perron, it was a feeling that the Democratic Party had betrayed her after a lifetime of trusting it deeply.”

Michael Kruse: “What will Trump’s post-presidency look like — and what will it do to America? There is no real precedent in the annals of the nation — and thus no real playbook for how to manage the kind of civic disruption it is likely to cause. But from history, and from people who’ve known him, it’s possible to stitch together a more-than-educated guess at what the country’s in for — a portrait of the nation’s first real anti-presidency.”

Susan Glasser: “Eight days into his tenure, President Joe Biden has not occupied my every waking thought—nor, I suspect, yours. He has not insulted anyone, as far as I’m aware. He has not played golf instead of working, or held late-night counselling sessions with cable-television anchors, or caused a rupture in our relationship with Australia. He had a friendly call with Angela Merkel, and a stern one with Vladimir Putin. He went to church on Sunday, and stopped for bagels in Georgetown. His tweets have been sparse and so anodyne that a writer for the Washington Post compared them to the sayings that come inside fortune cookies. He has returned policy wonks and message discipline to the White House. Technocrats are in; Rudy Giuliani is out.”

“In some ways, Biden has already fulfilled his first, and arguably most compelling, campaign promise: being the un-Trump.”

“Georgia voters would be required to make copies of their photo ID and mail them to election officials twice before being allowed to cast an absentee ballot,” the Atlanta Journal Constitution reports.

Arizona state Rep Shawnna Bolick (R) introduced legislation which would give the legislators the power to toss out the Secretary of State’s certification of electors in a presidential election “at any time before inauguration,” the Arizona Capitol Times reports.

NBC News: “Trump is not planning to appear in person to defend himself against the charge that he incited the deadly riot at the U.S. Capitol on Jan. 6, effectively ending any speculation of a possible cameo by the former president.”

“The Trump administration’s decision to relocate most of the Bureau of Land Management from Washington to Colorado — a move designed to shift power away from the nation’s capital — resulted in an exodus by 2020 of more than 87 percent of the affected employees, who either quit or resigned rather than move,” the Washington Post reports.

“The exit of longtime career staffers from the agency responsible for managing more than 10 percent of the nation’s land shows the extent to which the Trump administration reshaped the federal government.”