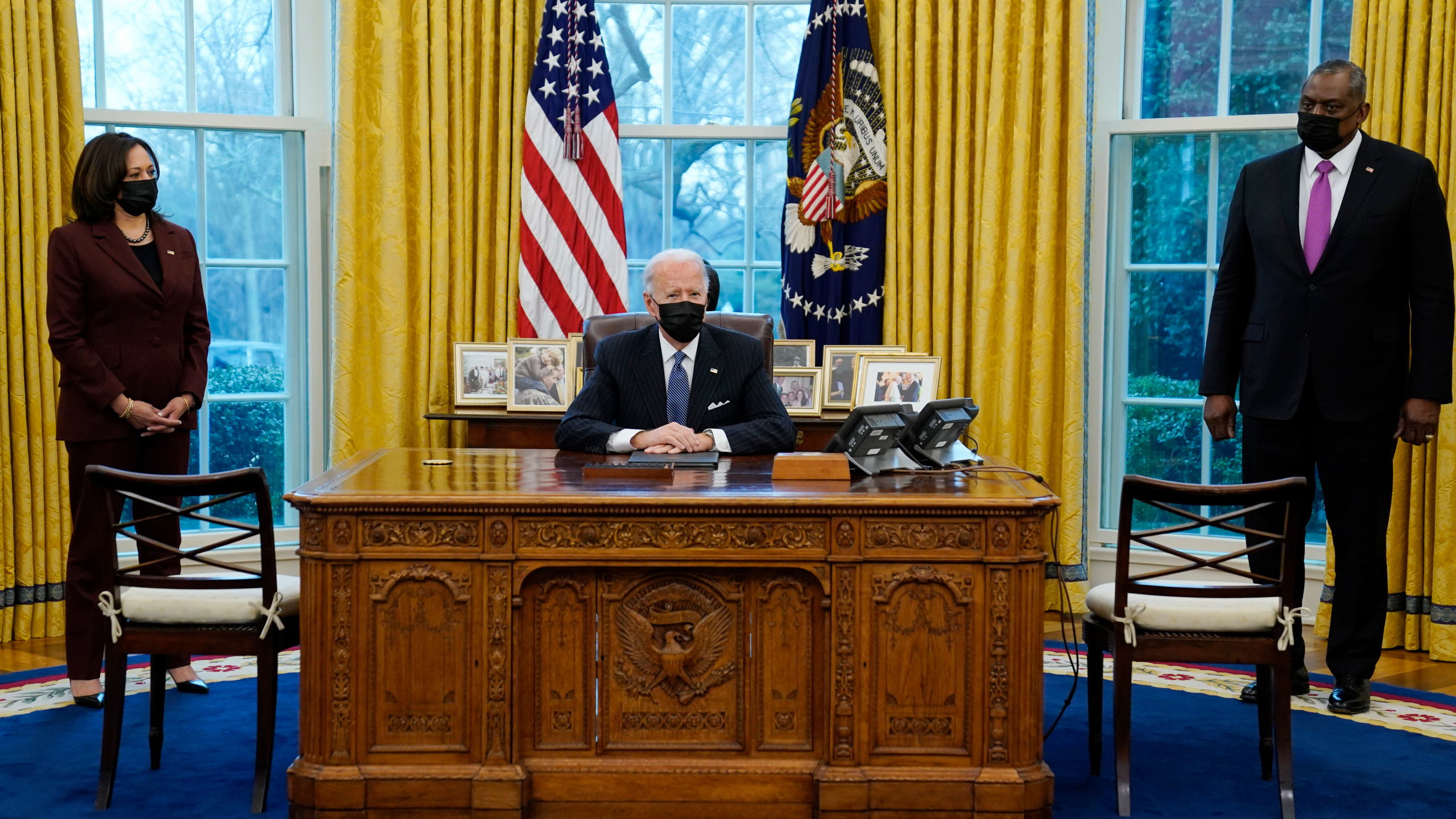 “Senate Majority Leader Chuck Schumer and Speaker Nancy Pelosi indicated they will begin moving forward on a massive coronavirus package as soon as next week, with or without Republicans,” Politico reports.

“Schumer gave some of his strongest indications yet that this could happen soon, starting with passage of a budget resolution that unlocks reconciliation’s power. … Schumer also said that slashing the package in a major way isn’t going to happen.”

“The White House said Thursday that it didn’t plan to ask Congress to split its $1.9 trillion Covid-19 relief proposal into two pieces amid mounting opposition from Republicans and centrist Democrats who say the plan is too costly,” the Wall Street Journal reports.

“White House economic adviser Brian Deese and Covid-19 coordinator Jeff Zientz held a call Thursday with Senate Democrats as they grapple with whether to cut a slimmed-down deal or use a process known as reconciliation to bypass the Senate’s 60-vote rule to avoid a filibuster.”

Washington Post: Biden’s first full week in office has showcased an almost jarring departure from his predecessor’s chaotic style, providing the first window into a tenure whose mission is not only to remake the White House in Biden’s image but to return the presidency itself to what he sees as its rightful path.”

“The result so far is a 9-to-5 presidency — a tightly scripted burst of activity that was charted over the past few months, as Biden seeks to avoid heated conflict and stick to his plan of lowering the political temperature to a level that many Americans can tune out.”

Most House Republicans were silent on Wednesday after CNN’s KFile reported that Rep. Marjorie Taylor Greene repeatedly indicated support for executing prominent Democratic politicians in 2018 and 2019 before being elected to Congress, CNN reports.

Rep. Adam Kinzinger (R-IL) told CNN that newly elected Rep. Marjorie Taylor Greene (R-GA) is “not a Republican” and that she should not be permitted to sit on any congressional committees.

Said Pelosi: “What I’m concerned about is the Republican leadership in the House of Representatives, who was willing to overlook, ignore those statements … assigning her to the Education Committee when she has mocked the killing of little children at Sandy Hook Elementary School, when she has mocked the killing of teenagers in high school, at the Marjory Stoneman Douglas High School. What could they be thinking? Or is thinking too generous a word for what they might be doing?”

“House GOP Leader Kevin McCarthy on Wednesday implored Republicans to stop publicly attacking each other amid GOP infighting over the deadly Jan. 6 Capitol riots, which has created simmering tensions inside the conference,” Politico reports.

“During a private conference call, McCarthy told members that they should be spending more time countering the Biden agenda than chastising each other, adding he would no longer have any tolerance for such behavior… McCarthy also reminded House Republicans that they will have an opportunity to air their grievances during a closed-door meeting in the Capitol next week, where a conservative-led push to oust Rep. Liz Cheney (R-WY) over her vote to impeach President Donald Trump is expected to come to a head.”

“A top official at the National Republican Congressional Committee abruptly decided to resign earlier this month after House GOP Leader Kevin McCarthy and nearly 150 GOP lawmakers voted against certifying the Electoral College results, CNN has learned, in the latest sign of the civil war brewing inside the Republican Party as it seeks to rebuild in the post-Trump era.”

Playbook: “The McCarthy-Trump relationship has been quite the soap opera lately, as we and a million other reporters have written. First, McCarthy said Trump was to blame for Jan. 6. Then Trump called McCarthy a ‘pussy.’ Then McCarthy backtracked to say Trump didn’t ‘provoke’ the riot.”

“Today, McCarthy will try to smooth things over, a process he started a few days ago. In Florida to raise money, the GOP leader plans to drop by Trump’s resort to inquire about the president’s political plans, we’re told. Unlike Senate Minority Leader Mitch McConnell, who reportedly doesn’t want to speak to the ex-president ever again, McCarthy believes it’s in his interest to be on Trump’s good side. Banishing him could cause problems for House Republicans and imperil McCarthy’s dream of becoming speaker one day. Trump is popular with the base and — as far as McCarthy is concerned — still the leader of the Republican Party. We can’t help but wonder if he’ll bring red and pink Starbursts.”

“Trump world is ecstatic about the visit, viewing the huddle as proof of a comeback in the making.”

“The U.S. economy shrank by 3.5 percent last year as the novel coronavirus upended American business and households, making 2020 the worst year for U.S. economic growth since the depths of the Great Recession,” the Washington Post reports.

“This is the last GDP report from former president Donald Trump’s tenure. Until the pandemic, Trump was on track for an economic record that put him near the middle of the pack among recent presidents. But the covid-19 crisis has ensured that he is likely to have overseen the slowest economic growth of any president in the period since the Second World War.”

“The Biden administration has imposed a temporary freeze on U.S. arms sales to Saudi Arabia and is scrutinizing purchases by the United Arab Emirates as it reviews billions of dollars in weapons transactions approved by former President Donald Trump,” the Wall Street Journal reports.

“The review, the officials said, includes the sale of precision-guided munitions to Riyadh, as well as top-line F-35 fighters to Abu Dhabi, a deal that Washington approved as part of the Abraham Accords, in which the Emirates established diplomatic relations with Israel.”

“But veterans of the last administration fear this newly empowered group of progressives may be naive about what can be achieved without undermining U.S. security, and are already warning them to prepare for a shock when they read the latest intelligence.”

The Economist: “This is an awkward moment for the QAnon conspiracists who put their considerable faith in Donald Trump. Inauguration Day came and went with no mass execution of Satanist Democratic pedophiles. The Storm, as a million-odd QAnon followers called that wished-for event, was a shower. So there was no Great Awakening—a post-slaughter celebration of Mr Trump—either.”

“But QAnon is not going away. Updated versions of it are spreading—including one on TikTok that has pushed the Storm back to March 4th. And the conspiratorial impulse behind QAnon will be even more enduring. Fully half of Mr Trump’s supporters claimed to believe its core falsehoods: that he was fighting a high-level Democratic child-sex operation. As that suggests, the conspiracy is not only dangerous in itself, but both symptom and cause of the bigger epistemic and democratic crisis that Mr Trump has moved from the murkier parts of the internet to the Republican mainstream.”

Politico: “The Biden administration on Thursday is expected to announce it’s throwing open the doors to the law’s enrollment site, HealthCare.gov, making it easier for the uninsured to get coverage during the pandemic. It is also expected to restore Obamacare marketing funds that the Trump administration had gutted, and it will soon begin the process of reversing the previous administration’s changes to Medicaid.”

President Joe Biden “is delaying by at least a few days a series of executive actions on immigration that were anticipated as early as this week, including the reversal of Trump-era asylum policies and a plan to reunite migrant families separated at the U.S.-Mexico border,” CBS News reports.

NBC News reports that included in President Joe Biden’s proposed immigration overhaul would be a provision striking the dehumanizing term “alien” found in our nation’s immigration law, and replacing it with the term “noncitizen.” This may seem like a small edit to some, perhaps more of a search-and-replace, but words matter. Especially after the previous four years.

“The term ‘alien’ is used as a dehumanizing slur, and should be removed from the language in our statutes,” Texas congressman and Congressional Hispanic Caucus member Joaquin Castro told NBC News. “This change might seem symbolic, but it’s an important step to restore humanity after years of demonization.”

“When President Biden swore in a batch of recruits for his new administration in a teleconferenced ceremony late last week, it looked like the country’s biggest Zoom call. In fact, Mr. Biden was installing roughly 1,000 high-level officials in about a quarter of all of the available political appointee jobs in the federal government,” the New York Times reports.

“At the same time, a far less visible transition was taking place: the quiet dismissal of holdovers from the Trump administration, who have been asked to clean out their offices immediately, whatever the eventual legal consequences.”

“If there has been a single defining feature of the first week of the Biden administration, it has been the blistering pace at which the new president has put his mark on what President Donald J. Trump dismissed as the hostile ‘Deep State’ and tried so hard to dismantle.”

At least five federal judges with lifetime appointments who have announced plans to retire or semi-retire since last Wednesday, the day Donald Trump left the White House, the HuffPost reports.

That’s after eight judges had already announced their plans to step down since Biden was declared the winner of the 2020 presidential election.

Secretary of State Antony Blinken tried to reset the U.S. government’s relationship with the news media on his first full day in office, calling an independent press essential to the country’s global image and a “cornerstone of our democracy,” the Washington Post reports.

Said Blinken: “You keep the American people and the world informed about what we do here. That’s key to our mission.”