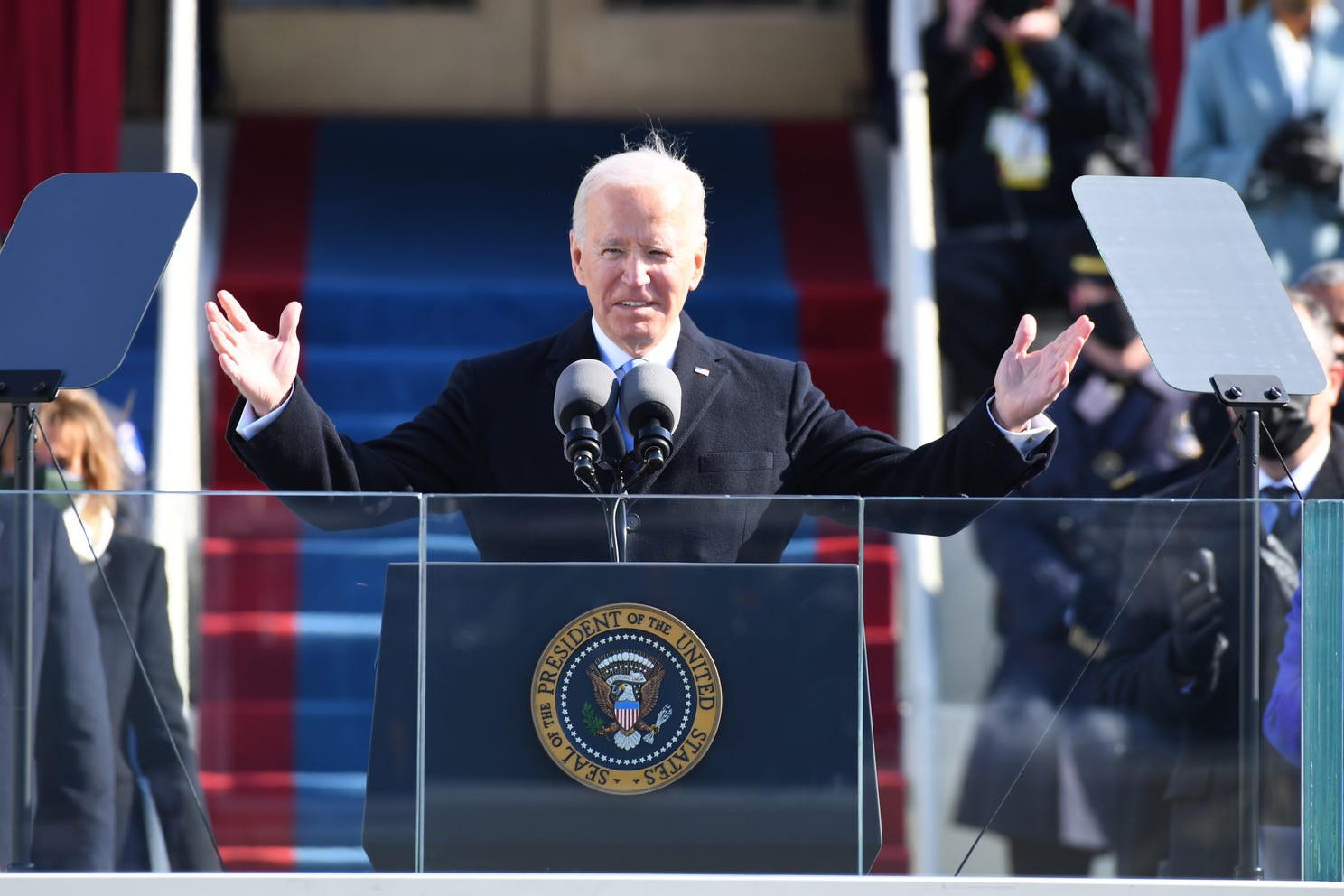 Charlie Sykes: “Even without Trump, the GOP remains a deeply unserious party.”

“A serious party, for example, does not number in its ranks someone like Marjorie Taylor Greene.”

“She is, not to put too fine a point on it: a nut, a fabulist, and a conspiracy theorist of the most wretched water. But today’s GOP has not only elevated her to a seat in Congress, but has made her a member in good standing, embraced by party leadership, and supported by the party’s apparatus and dollars.”

“A serious party has at least minimal standards of political hygiene, but when she and fellow crazy person Lauren Boebert were elected, GOP Leader Kevin McCarthy welcomed and defended them.”

Politico: “Even as McConnell has seen some of his power ebb away—losing his Senate majority on the clay fields of Georgia, breaking with Donald Trump in the final days of his presidency—he still finds himself an essential figure in Biden’s Washington.”

“He is the key to the new president’s ability to turn the page from the Trump years. After years of legislative stasis, Biden is betting big that the Senate can return to the deal-making body he and McConnell came of age in. He hopes that he and his 2012 negotiating partner can plumb their shared history to locate a workable middle in a hyperpolarized time.”

New York Times: “President Biden moved into the White House this week, replacing a leader whose constant need to command attention left millions of American exhausted by the nonstop spectacle and facing a seemingly unparalleled set of challenges.”

“But a decade ago and 3,000 miles away, there actually was something of an analog: another septuagenarian career politician and elder statesman swept back into high office after the tumultuous tenure of a political outsider. It was Jerry Brown, and his second act as California governor, in which he promised a return to stability after Arnold Schwarzenegger, offers a road map for Mr. Biden.”

Carter and Richmond were opponents in 2008, when Louisiana briefly experimented with using partisan primaries in place of its all-party primary system. They both unsuccessfully challenged scandal-ridden incumbent Bill Jefferson for the Democratic nomination: Richmond took third with 17%, while Carter placed sixth with 8%. Jefferson would go on to lose the general election to Republican Joe Cao, whom Richmond defeated two years later.

MARYLAND GOVERNOR–A fundraising consultant for Prince George’s County Executive Angela Alsobrooks, whose name has come up frequently as a possible Democratic candidate for governor, recently mused to the Baltimore Sun that Alsobrooks’ $1 million campaign war-chest “certainly gives her the resources to do what she wants to do,” adding, “The possibilities are limitless.”

Meanwhile, former state Attorney General Doug Gansler claims that, despite bringing in $225,000 last year, he’s not actively fundraising for a gubernatorial campaign but suggested he is in fact thinking about the race. “For the few people who are looking toward next year,” said Gansler, “they know me and they see me as an experienced progressive who can win.”

Gansler’s almost right: Few people see him as someone who can win. The last time he ran for governor back in 2014, he badly lost the Democratic primary after a disastrous campaign capped off by an incident where he was photographed partying with drunken teenagers in Delaware.

ALASKA GOVERNOR–Activists seeking to recall Republican Gov. Mike Dunleavy, who put their campaign on hold last year when the coronavirus made signature-gathering very difficult, say they plan to restart their effort with vaccination now underway. Organizers say they will seek to collect petitions both by mail and safely in person.

Before pausing, recall proponents said they’d obtained almost 50,000 signatures, meaning they’d need at least 22,000 more to hit the threshold required to commence a recall election. If successful, officials would have to schedule an election 60 to 90 days after all signatures are verified, a process that can take up to 30 days. A bipartisan coalition kicked off the process in 2019, furious with Dunleavy’s draconian budget cuts, including a retaliatory reduction in funds for the Alaska Supreme Court after it ruled against him in an abortion rights case.

While Dunleavy is on the ballot in 2022, one organizer explained the renewed push by saying, “There’s so many things, so many reasons why two more years is way too long.” If Dunleavy is ultimately removed from office, Lt. Gov. Kevin Meyer, a fellow Republican, would take his place.

NEBRASKA GOVERNOR–State Sen. Brett Lindstrom recently told the Lincoln Journal Star that he was leaning towards running to succeed his fellow Republican, termed-out-Gov. Pete Ricketts, but that he wouldn’t be making any announcements until the legislative session ends in late May.

Lindstrom, who played as a walk-on for the University of Nebraska’s football team in the early 2000s, got his start in electoral politics in 2012 when he ran against then-Rep. Lee Terry in the GOP primary for the 2nd Congressional District, a contest where Terry prevailed 59-23. Lindstrom successfully won an Omaha area state Senate seat two years later, and as the online magazine Ozy wrote in a 2017 profile, he’s occasionally defied his party’s far-right orthodoxy.

Lindstrom was the crucial vote to repeal the death penalty in Nebraska during his first year in office, a stance that led to at least one death threat. (Ricketts and his allies successfully promoted a ballot measure to reinstate capital punishment.) Lindstrom also backed workplace protections for LGBTQ people and voted to override Ricketts’ veto of a gas tax.

MICHIGAN GOVERNOR–U.S. Attorney Matthew Schneider, who will soon step down from his post to join a private law firm, did not rule out a bid for governor or state attorney general in 2022 in new comments to Crain’s Detroit Business, but said, “My first priority right now is I need employment for my family.” Schneider, a Republican, was named to his current position by Donald Trump, but he blasted his one-time patron over Trump’s decision this week to pardon former Detroit Mayor Kwame Kilpatrick, who had served only six years of a 28-year prison sentence for corruption.

MINNESOTA GOVERNOR–Republican Rep. Pete Stauber declined to rule out a bid for governor in a new interview by means of an extremely awkward triple negative: “I will never say what I never will not do,” he didn’t not say. Fortunately, Stauber was clearer in his very next comment, in which he said, “I’m keeping all options open.”

NEW JERSEY 3rd CD–Former Evesham Mayor Randy Brown, a Republican who is also a member of the coaching staff of the Baltimore Ravens, is once again not ruling out a bid against Democratic Rep. Andy Kim in this coastal South Jersey seat. Brown talked about running here in the 2014 and 2020 cycles and also mulled a 2017 gubernatorial bid, but he stayed out each time.

Brown, who calls himself a “proud Trump supporter,” did criticize the former White House occupant for having “incited many of his extreme followers to storm our Capitol,” but he’s been all too happy to parrot some of Trump’s biggest lies. Brown took umbrage with Democratic Gov. Phil Murphy’s successful push to institute mail-in voting, insisting, “As we are all aware NJ has been a hotbed for mail in ballot fraud.”

Elizabeth Drew: “Presidents Donald Trump and Richard Nixon both left Washington in helicopters and ignominy, awash in financial problems and their customary self-pity. Both were above-average paranoiacs who felt (with some justification) that the elites looked down on them and that enemies everywhere sought to undermine them; they despised the press, exploited racism for political purposes and used inept outside agents (the ‘plumbers,’ Rudy Giuliani) to carry out their more nefarious plots. Neither was inclined to let aides rein them in. Both were impeached for trying to manipulate the opposition party’s nomination contest. Both degraded the presidency. Both came unglued at the end.”

“But then, astonishingly, Nixon rehabilitated himself. He methodically worked his way into the rarefied circles where he coveted approval, and he won over a large if far-from-universal segment of the public. Nixon’s post-presidency was a quest to make himself respectable again — and it worked. He landed in 1974 at his Spanish-style San Clemente, Calif., home essentially friendless, deeply depressed, unwell (a bad case of phlebitis), and beset by huge legal fees and back taxes. Through wit, grit, wiliness and determination he wrought one of the greatest resurrections in American politics.”