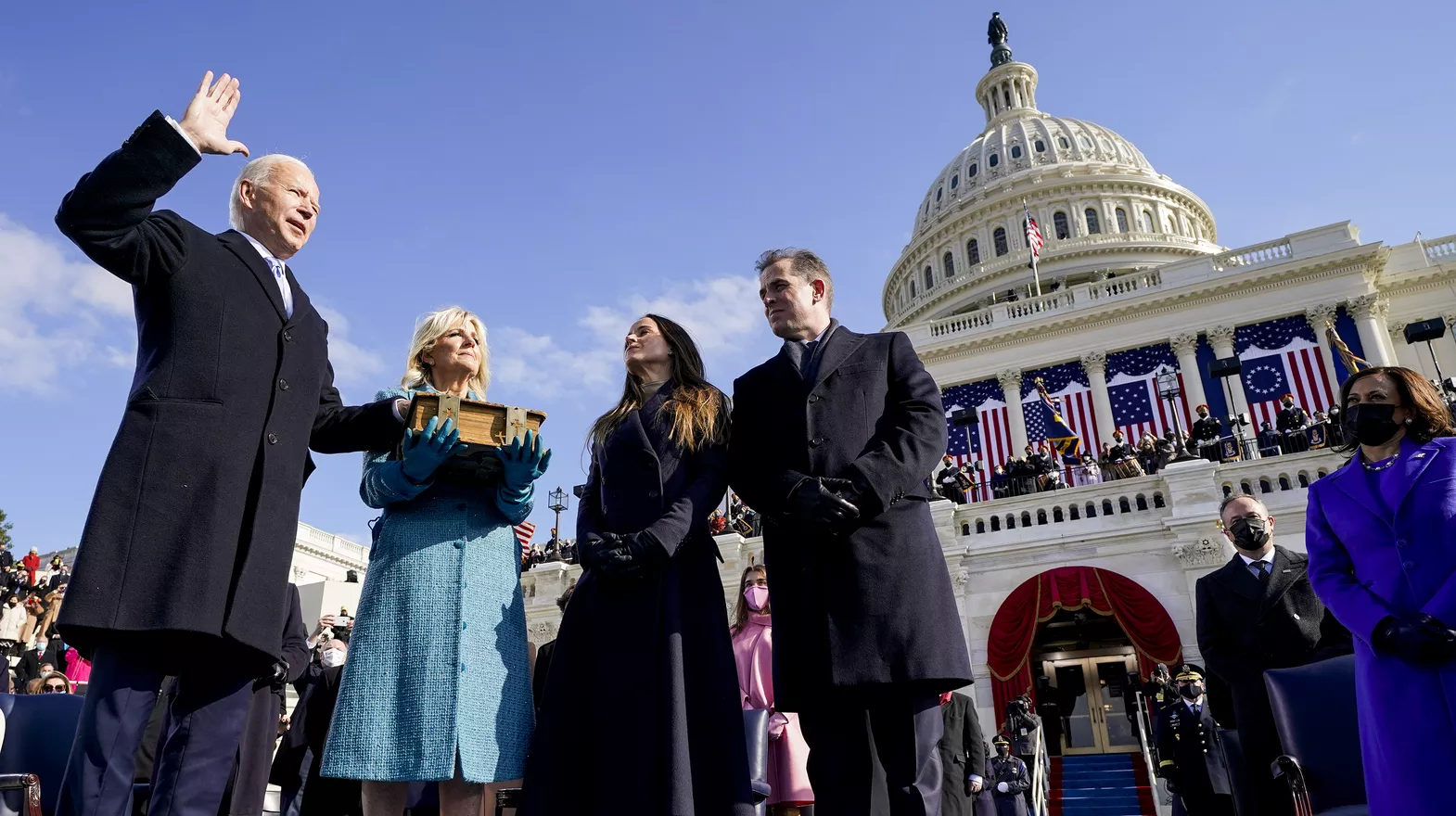 In his first speech as president, Joe Biden emphasized unity, situating his inauguration among other tense moments in American history where democracy prevailed despite the country’s divisions and crises.

Referencing the Civil War, the Great Depression, and World War II, Biden’s address stood in stark contrast to the “American carnage” references his predecessor used four years ago, clarifying the challenges facing the nation but asking Americans to appeal to their better natures. While calling out the toxic nature of the misinformation that has divided the country — a notable mention while speaking to dozens of Republican lawmakers who denied his electoral win — Biden affirmed his belief in a unified country.

“Politics doesn’t have to be a raging fire, destroying everything in its path,” Biden said. “We must reject the culture in which facts themselves are manipulated and even manufactured. My fellow Americans, we have to be different than this. America has to be better than this. And I believe America is so much better than this.

Biden presented a harmonious, hopeful vision of the country — something of a continuation with his (perhaps overly) idealistic campaign rhetoric that painted America as a nation better than its actions under President Donald Trump. On Inauguration Day, however, he did not gloss over the country’s issues, clearly calling out white supremacy, domestic terrorism, and racial injustice as being challenges to the soul of the nation, promising his “whole soul” was in the fight to make America “once again the leading force for good.”

The solution to America’s problems and the divisions it faces, Biden said, “is not to turn inward, to retreat into competing factions, distrusting those who don’t look like you or worship the way you do or don’t get their news from the same sources you do.”

The solution, he also made clear, was not his election. Instead, it is a collective ongoing effort. “We must end this uncivil war that pits red against blue, rural versus urban, conservative versus liberal,” he continued. “We can do this if we open our souls instead of hardening our hearts.”

The youngest inaugural poet in U.S. history read “The Hill We Climb,” which she finished after the riot at the Capitol, the New York Times reports. An absolutely extraordinary performance.

“Followers of QAnon, the pro-Trump conspiracy theory, have spent weeks anticipating that Wednesday would be the ‘Great Awakening’ — a day, long foretold in QAnon prophecy, when top Democrats would be arrested for running a global sex trafficking ring and President Trump would seize a second term in office,” the New York Times reports.

“But as President Biden took office and Mr. Trump landed in Florida, with no mass arrests in sight, some believers struggled to harmonize the falsehoods with the inauguration on their TVs.”

“Some QAnon believers tried to rejigger their theories to accommodate a transfer of power to Mr. Biden. Several large QAnon groups discussed on Wednesday the possibility that they had been wrong about Mr. Biden, and that the incoming president was actually part of Mr. Trump’s effort to take down the global cabal.”

“The Pentagon blocked members of President Joe Biden’s incoming administration from gaining access to critical information about current operations, including the troop drawdown in Afghanistan, upcoming special operations missions in Africa and the Covid-19 vaccine distribution program, according to new details provided by transition and defense officials,” Politico reports.

“The effort to obstruct the Biden team, led by senior White House appointees at the Pentagon, is unprecedented in modern presidential transitions and will hobble the new administration on key national security matters as it takes over positions in the Defense Department on Wednesday.”

Before leaving office, former President Trump signed a memorandum extending US Secret Service protection by six months for all his children, CNN reports.

Politico: “Trump spokesman Judd Deere confirmed Wednesday that the president had written a letter to President-elect Joe Biden and left it for him in the Oval Office’s Resolute Desk. The Trump White House did not divulge the contents of what Trump left for Biden to read.”

John Avlon: “Not all inaugural addresses are created equal — many are too long and consequently forgettable. Others make the mistake of laying out a specific policy agenda, rather than setting a broad direction toward a new horizon.”

“But an inaugural is preeminently a speech about the new president’s values — about how he sees the world and America’s role in it. At best it offers a unifying vision and the promise of new beginnings.”

“Most are remembered — if at all — for a single phrase that becomes shorthand for the entire speech. And if you listen closely, these lines often share a similar structure. This is the one of the secrets to what makes a great inaugural address.”

Politico: “Throughout a series of five back-to-back Cabinet confirmation hearings on Tuesday, Senate Republicans displayed a return-to-normal posture — staking out traditional conservative arguments and outlining their disagreements with the incoming Biden administration, but largely through a respectful back-and-forth with nominees. … It’s a stark departure from the tumultuous, free-wheeling Cabinet fights that defined the Trump era.”

New York Times: “As Mr. Trump departed the White House on Wednesday, the Proud Boys, once among his staunchest supporters, have also started leaving his side. In dozens of conversations on social media sites like Gab and Telegram, members of the group have begun calling Mr. Trump a ‘shill’ and ‘extraordinarily weak,’ according to messages reviewed by The New York Times. They have also urged supporters to stop attending rallies and protests held for Mr. Trump or the Republican Party.”

“On social media, Proud Boys participants have complained about his willingness to leave office and said his disavowal of the Capitol rampage was an act of betrayal. And Mr. Trump, cut off on Facebook and Twitter, has been unable to talk directly to them to soothe their concerns or issue new rallying cries.”

New York Times: “A large space was built for an audience that the White House had invited to see the president off. But for a man obsessed with crowd size, only about 300 people showed up, filling roughly a third of the standing area.”

“For several days, aides had tried to corral officials to come to the departure, and to bring guests. But several who remained working until the president’s final day in office said they were worn out and deeply angry over his behavior since Election Day, as he spread falsehoods about the race being stolen from him, overshadowing whatever substantive achievements they might remember. Some of his aides who had been with him the longest said they did not even watch the send-off on television.”