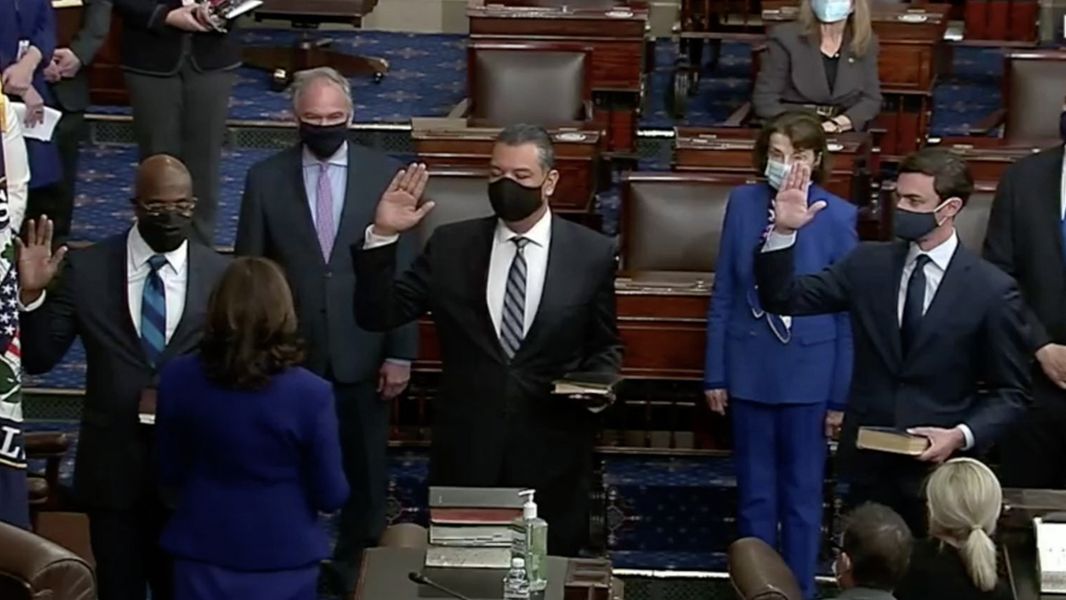 Said Coons: “He is planning to run again. He knows that we are at the middle of an absolute turning point, a pivot point in American history. And he’s up for the challenge.”

“Speculating about 2024 hours after Biden’s swearing-in is stepping on his Inauguration Day a bit, but the new president’s reelection plans will have immediate consequences.”

“Congress will treat him differently. Democrats eyeing their own White House runs will either be frozen in place or will be able to do the politicking that likely 2024 Republican candidates like Nikki Haley and South Dakota Gov. Kristi Noem are already doing. And it will affect both what Vice President Kamala Harris does and how she is covered when she does it.”

“Sen. Gary Peters (D-MI) is poised to become the chairman of the Democratic Senatorial Campaign Committee for the 2022 cycle as Democrats seek to defend their control of the 50-50 split Senate,” Politicoreports.

“Peters is beginning his second term after winning a narrow victory over Republican John James in Michigan last year in one of just two competitive races featuring Democratic incumbents defending their seats. Democrats took control of the Senate majority after flipping four seats — in Arizona, Colorado and both Georgia seats — and losing just one, in Alabama.”

COLORADO 3RD CD–Two Democratic state legislators, whom the Colorado Sun describes as “big-name” and “well-known,” are both considering bids against Republican Rep. Lauren Boebert, one of the most notorious freshmen in the 117th Congress. State Sen. Kerry Donovan of Vail and state Rep. Dylan Roberts say they’re consulting with supporters about the possibility, though Roberts suggested they’d try to avoid running against one another, citing “some divisive primaries in CD3 over the last couple of cycles.” (The Sun’s Jesse Paul describes the two lawmakers as “close friends.”) Donovan considered a bid for Senate in 2019 but ultimately deferred to the eventual winner, John Hickenlooper.

State Senate President Leroy Garcia is another Democrat whose name has come up, though he told Paul that he’s “not actively in the process of working on it or pursuing it” but did add that he “would never completely rule it out.” Meanwhile, Diane Mitsch Bush who lost to Boebert 51-45 last year and also unsuccessfully ran for this seat in 2018, says, “I doubt very much I would run” again but also cautioned, “I’m not totally ruling it out, no.”

VIRGINIA GOVERNOR–An effort to reverse last month’s decision by Virginia Republicans to choose their nominee for governor via a convention collapsed in acrimony over the weekend after convention backers succeeded in adjourning a meeting of the state party’s governing board before a vote could be held on switching to a primary. GOP leaders will reconvene Saturday to once again consider the proposal. (Democrats will hold a traditional primary on June 8.)

Meanwhile, campaign finance reports covering the second half of 2020 were due on Friday for all candidates who declared prior to Jan. 1. On the Democratic side, Gov. Terry McAuliffe swamped all comers, raising $5.8 million and finishing the period with $5.5 million in the bank. Former Del. Jennifer Carroll Foy was second, taking in $1.1 million and ending with $1.3 million cash-on-hand, while state Sen. Jennifer McClellan brought in $722,000 and had about $630,000 left over. Two other Democrats, Lt. Gov. Justin Fairfax and Del. Lee Carter, raised very little.

The top Republican contender, Del. Kirk Cox, trailed both of the two leading Democrats, with $775,000 raised and $691,000 on-hand. His only declared rival, state Sen. Amanda Chase, took in $471,000 and finished with $235,000. Full details on all reports are available at the Virginia Public Access Project.

MARYLAND 1st CD–Republican Rep. Andy Harris announced over the weekend that he would break his promise to serve no more than six terms in Congress and would run for a seventh next year, claiming “no one would have anticipated that we have the pushback from liberals and socialists that we have then” when he was first elected to the House in 2010.

Harris vocally campaigned on term limits during that race and backed a constitutional amendment to impose them on members of Congress in 2011, 2013, 2015, and 2016. In more recent years, though—no doubt mindful that his pledge was coming due—Harris ceased supporting such measures, even though resolutions proposing a term-limits amendment are regularly introduced.

Conservative die-hards occasionally try to punish violators, but Harris’ biggest problems lie elsewhere. Harford County Executive Barry Glassman blasted Harris for his role in fomenting the Jan. 6 attack on Congress—”I am embarrassed that our Congressman Harris was part of such a[n] act of sedition,” he said—and says he might challenge him in next year’s Republican primary. If Glassman goes for it, it would be an interesting test of the GOP’s ability to police itself, though everything we’ve seen in recent years suggests that taking on Trumpism from within Republican ranks is doomed to fail.

Politico: “Three of the big power centers that drove the GOP’s last successful midterm campaign are no longer the same forces in party politics now, with Republicans out of the White House and in the minority in both chambers of Congress. The Koch network of megadonors and big-spending outside groups has stepped back its partisan political campaigning, while the U.S. Chamber of Commerce not only shrunk its spending but made a bipartisan shift.”

“Others, like the National Rifle Association, [have] been consumed by internal strife. The advocacy group announced last week it would be filing for bankruptcy. In their place, power and cash consolidated around Trump and the GOP’s Senate and House leadership in recent years.”

Lincoln Project co-founder Rick Wilson said that now that former President Trump is out of office, he intends to turn the super-PAC’s attention to Sen. Ted Cruz (R-TX), The Hill reports.

Said Wilson: “We all know Ted Cruz is sort of a political force of nature. He is what he is. You either hate him or you hate him. And he is a guy who went so far over the edge, not just to appease Donald Trump and Trump’s base, but because he felt like Sen. Josh Hawley (R-MO) had gotten out ahead of him on it.”

“Sen. Rick Scott was among former President Donald Trump’s closest allies the past two years. But the Florida Republican pledged on Thursday to back GOP incumbents, even if Trump or his family get involved in the 2022 Senate races,” Politico reports.

WYOMING AT LARGE–Rep. Liz Cheney, the third-ranking Republican in the House, just earned a primary challenge from state Sen. Anthony Bouchard as a result of her vote to impeach Donald Trump last week. Bouchard slammed Cheney in his kickoff, saying her “long-time opposition to President Trump and her most recent vote for impeachment shows just how out of touch she is with Wyoming.”

The Casper Star-Tribune describes Bouchard as a gun activist and says he’s “built a reputation in the Wyoming Legislature as one of its most conservative members.” Politics1 also reports that on social media, Bouchard has been “a vocal fan” of two of the most extreme Republican members of the House, Marjorie Taylor Greene and Lauren Boebert.

Smith has a long career in Cleveland politics going back to her 1998 election to the state House and her subsequent service in the upper chamber. Smith was termed-out in 2014 and ran for Cuyahoga County executive, but she lost the Democratic primary to the eventual winner, Armond Budish, by a 56-20 margin.