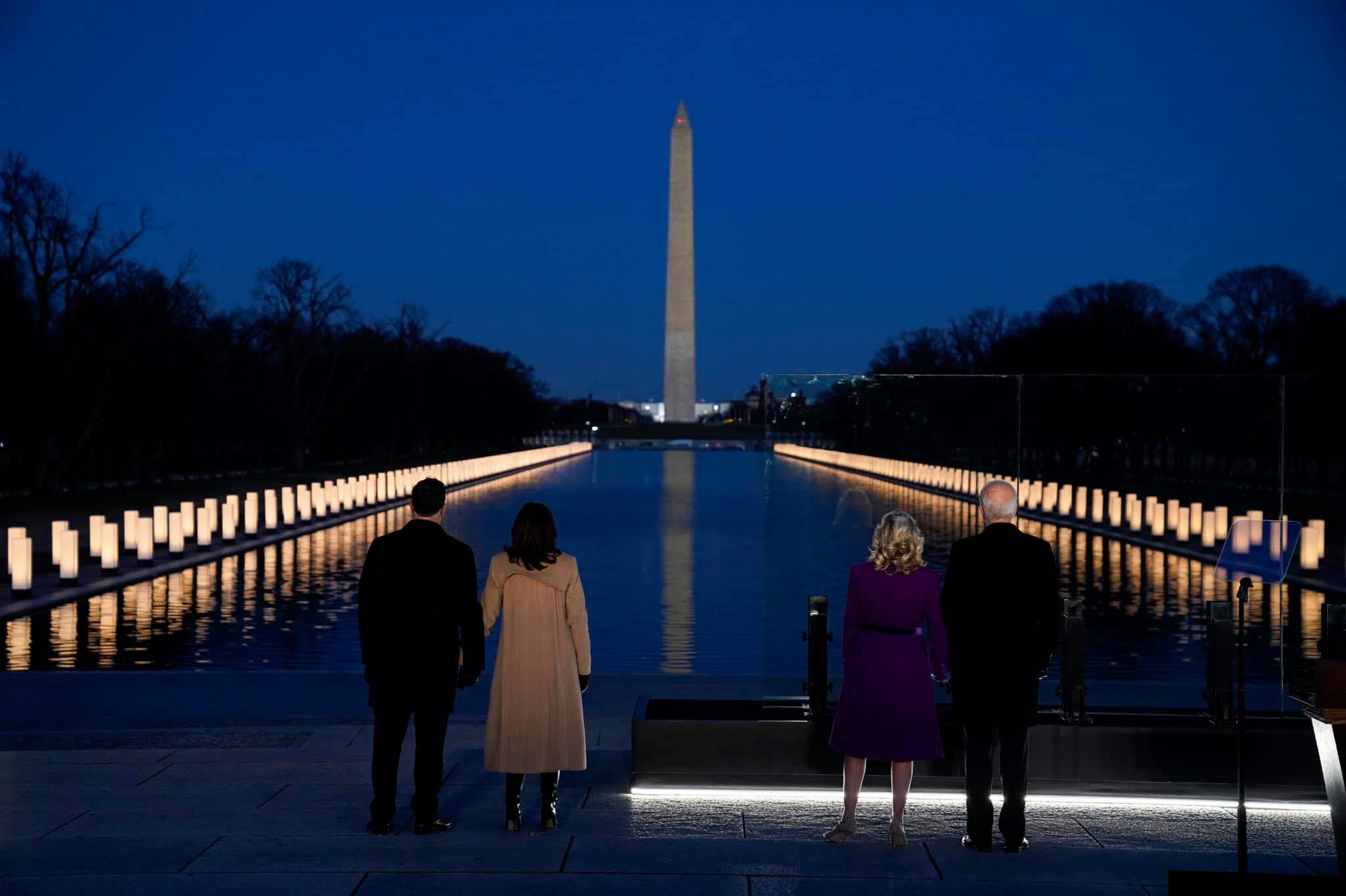 “President-elect Joe Biden will roll out a sweeping overhaul of nation’s immigration laws the day he is inaugurated, including an eight-year pathway to citizenship for immigrants without legal status and an expansion of refugee admissions, along with an enforcement plan that deploys technology to patrol the border,” the Washington Post reports.

“Biden’s legislative proposal, which will be sent to Congress on Wednesday, also includes a heavy focus on addressing the root causes of migration from Central America, a key part of Biden’s foreign policy portfolio when he served as vice president.”

CBS News has the complete list on what President Biden has promised in his first 100 days.

“Their decision is a clear sign of unity before Biden takes the oath of office.”

CNN: “The President has been in a foul mood for several days and has lost interest in the performative parts of the presidency he once relished.”

“While he’s eagerly anticipating his military-style send-off from Joint Base Andrews on Inauguration morning — one of the few items that have cheered him up recently — there were already signs the crowd may be smaller than he’d hoped. And a slate of actual celebrities lined up for Biden’s inauguration has disappointed a president who tried and often failed to secure A-list support for his own presidency.”

“Brayden Harrington, the 13-year-old New Hampshire boy who bonded with President-elect Joe Biden over their shared experience with stuttering, will be part of the prime-time special capping off Biden’s inauguration on Wednesday evening,” CNN reports.

“Harrington, who went viral over the summer after talking about his bond with Biden in a video at the Democratic National Convention, said Biden’s inauguration will send a special message to kids — including those grappling with stuttering.”

First Read: “Nothing he will say in his inaugural address and no executive order he will issue in his first days will be more important than achieving his goal of injecting 100 million vaccine doses in his first 100 days as president.”

“If he gets that right, he will oversee a less pessimistic American public; he’ll get a stronger economy; and he’ll do something that his predecessor was unable to execute in his final days.”

“If Biden doesn’t get it right, however, he’ll fail on the job he was elected to do.”

Jonathan Last: “So how will Donald Trump’s presidency be remembered by history? We already know the answer: He oversaw a disastrous response to a global pandemic, because of which more than 400,000 Americans died on his watch.”

“That’s it. That’s his legacy. And if he gets a second line in the history books it will be this: He incited an insurrection on the U.S. Capitol which led to a second impeachment.”

“Anyone who tells you that Trump will be remembered for the economic expansion of the first three years of his term is a fool. History has nothing to say about the economic performance during Clinton’s eight years. The Reagan economic boom is only a footnote to his tenure. Look: Barack Obama gets almost no recognition for the economy of his final seven years and that took place the day before yesterday.”

“The mob was fed lies. They were provoked by the President and other powerful people, and they tried to use fear and violence to stop a specific proceeding of the first branch of the federal government which they did not like.”

President Trump gave a farewell video address on Tuesday, saying that his administration “did what we came here to do — and so much more.”

Axios notes Trump condemned the Jan. 6 attack on the Capitol by his supporters, but added, “As I prepare to hand power over to a new administration… I want you to know that the movement we started is only just beginning.”

“Self-styled militia members from Virginia, Ohio and other states made plans to storm the U.S. Capitol days in advance of the Jan. 6 attack, communicating in real time as they breached the building on opposite sides and led dozens in a hunt for lawmakers to make ‘citizen’s arrests,’” the Washington Post reports.

“The extraordinary real-time narration of parts of the assault on the Capitol came as investigators made public new details of events in unsealed conspiracy charges in which thousands of pro-Trump supporters forced the evacuation of lawmakers and triggered violence that left five people dead.”

The John’s Hopkins tracker shows more than 400,000 Americans have died from COVID-19.

“President Trump has pardoned Stephen K. Bannon, the firebrand architect of his 2016 campaign who was charged last year with defrauding donors to a private fundraising effort for construction of a wall on the U.S.-Mexico border,” the Washington Post reports.

“Trump approved Bannon’s pardon late Tuesday, after days of frantic deliberations. Some aides said as recently as Monday night that the move appeared unlikely. Trump vacillated throughout the day Tuesday, and even after he said he was going to sign off on the pardon, it remained unclear for some time that he would actually do so.”

New York Times: “Mr. Trump also was set to grant clemency to Elliott Broidy, a fund-raiser for the president who pleaded guilty last year to conspiring to violate foreign lobbying laws as part of a covert campaign to influence the administration on behalf of Chinese and Malaysian interests.”

CNN: “Huddled for a lengthy meeting with his legal advisers, Trump was warned the pardons he once hoped to bestow upon his family and even himself would place him in a legally perilous position, convey the appearance of guilt and potentially make him more vulnerable to reprisals.”

“So, too, was Trump warned that pardons for Republican lawmakers who had sought them for their role in the Capitol insurrection would anger the very Senate Republicans who will determine his fate in an upcoming impeachment trial.”

“White House counsel Pat Cipollone and another attorney who represented Trump in his first impeachment trial, Eric Herschmann, offered the grave warnings as Trump, his daughter Ivanka and her husband Jared Kushner listened. Other lawyers joined by telephone. They all told Trump he should not pardon himself, his family or any GOP lawmakers in a prospective manner unless he was prepared to list specific crimes.”

“The founder of MyPillow, a vocal and in the past few weeks very visible supporter of President Trump, says a backlash against the company has begun after a mob stormed the U.S. Capitol this month,” the AP reports.

“Mike Lindell, the company CEO and also the face of the brand, said major retailers like Bed Bath & Beyond and Kohl’s have dropped his products recently.”

Olivia Nuzzi reviews the product: “If Trump doesn’t keep you up all night, MyPillow will.”

New York Times: “The size and precise composition of the list is still being determined, but it is likely to cover at least 60 pardons or commutations and perhaps more than 100. Already, Mr. Trump has been making calls to some of the recipients, people briefed about them said, and he held another meeting about the topic on Monday afternoon.”

“There are no plans for Mr. Trump to include a pardon for himself on the list to be released on Tuesday or for him to pre-emptively pardon his two adult sons, Donald Trump Jr. and Eric Trump, neither of whom has been charged with any wrongdoing, officials said. But Mr. Trump’s ultimate decision about pardoning himself and members of his family, they said, could remain an open question until noon on Wednesday, when his four-year tenure comes to an end.”

“White House officials don’t expect President Trump to pardon himself, family members or close aides, but clemency is in the works for a famous rapper and others,” Bloomberg reports.

“Trump is expected to announce a list of pardons on Tuesday — his final full day in office — and had discussed with aides the possibility of blanket pardoning himself, in anticipation he might later be charged with federal crimes. Trump has previously claimed such power, though it’s a matter of legal dispute and has never before been attempted by a president.”

Tim Naftali: “Trump was a serial violator of his oath—as evidenced by his continual use of his office for personal financial gain—but focusing on three crucial ways in which he betrayed it helps clarify his singular historical status. First, he failed to put the national-security interests of the United States ahead of his own political needs. Second, in the face of a devastating pandemic, he was grossly derelict, unable or unwilling to marshal the requisite resources to save lives while actively encouraging public behavior that spread the disease. And third, held to account by voters for his failures, he refused to concede defeat and instead instigated an insurrection, stirring a mob that stormed the Capitol.”

“Many chief executives have failed, in one way or another, to live up to the demands of the job, or to competently discharge them. But historians now tend to agree that our worst presidents are those who fall short in the second part of their pledge, in some way endangering the Constitution. And if you want to understand why these three failures make Trump the worst of all our presidents, the place to begin is in the basement of the presidential rankings, where dwell his rivals for that singular dishonor.”

President-elect Joe Biden announced Tuesday that he will nominate Pennsylvania’s top health official, Rachel Levine, to be his assistant secretary of health, the Washington Post reports.  Levine, a pediatrician, would become the first openly transgender federal official to be confirmed by the U.S. Senate.

“The FBI privately warned law enforcement agencies Monday that far-right extremists have discussed posing as National Guard members in Washington and others have reviewed maps of vulnerable spots in the city — signs of potential efforts to disrupt Wednesday’s inauguration,” according to an intelligence report obtained by the Washington Post.

“The document, a summary of threats that the FBI identified in a Monday intelligence briefing, warned that both ‘lone wolves’ and adherents of the QAnon extremist ideology, some of whom joined in the violent siege on the Capitol on Jan. 6, have indicated they plan to come to Washington for President-elect Joe Biden’s swearing-in ceremony.”

“No plot against Biden was found.”

Politico: “A higher-than-usual number of Trump administration political appointees — some with highly partisan backgrounds — are currently ‘burrowing’ into career positions throughout the federal government, moving from appointed positions into powerful career civil service roles, which come with job protections that will make it difficult for Biden to fire them.”

“While this happens to some degree in every presidential transition, and some political appointees make for perfectly capable public servants, Biden aides, lawmakers, labor groups and watchdog organizations are sounding the alarm — warning that in addition to standard burrowing, the Trump administration is leaning on a recent executive order to rush through dozens if not hundreds of these so-called ‘conversions.’ … Thanks to weak transparency laws, the full impact of both changes may not be known for months.”