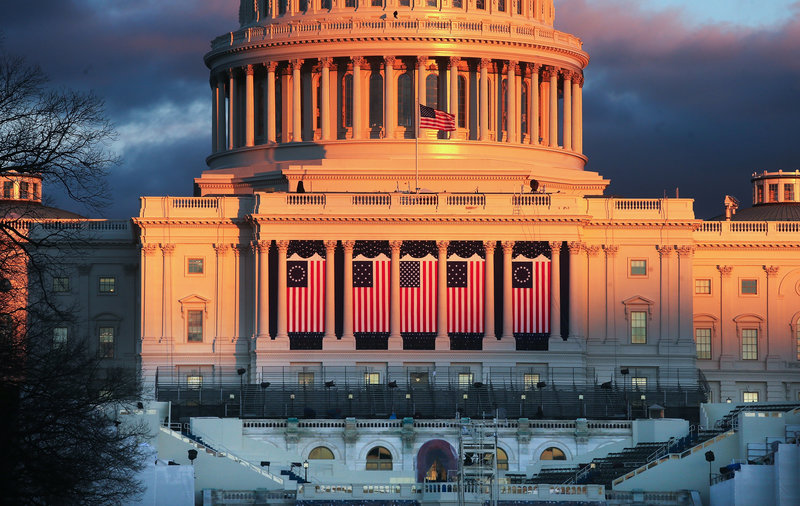 “The roughly 25,000 National Guardsmen deployed to the U.S. capital to ensure President-elect Joe Biden is able to be sworn in peacefully went through an additional background check to weed out any whiff of domestic extremism,” Defense One reports.

“Added for one of the most fraught deployments in the history of the Guard, the screening is ‘about the same’ as the standard background check that Guardsmen go through when they initially enlist, the commanding general of the D.C. National Guard said in an interview on Saturday.”

How about we prescreen everyone in the military and all police forces?

“U.S. defense officials say they are worried about an insider attack or other threat from service members involved in securing President-elect Joe Biden’s inauguration, prompting the FBI to vet all of the 25,000 National Guard troops coming into Washington for the event,” the APreports.

“The massive undertaking reflects the extraordinary security concerns that have gripped Washington following the deadly Jan. 6 insurrection at the U.S. Capitol by pro-Trump rioters. And it underscores fears that some of the very people assigned to protect the city over the next several days could present a threat to the incoming president and other VIPs in attendance.”

Extraordinary new video from Luke Mogelson at the New Yorker offers a chilling look into the Capitol siege that left five dead.

It comes just a few days before President Trump leaves office, and complicates the Biden administration’s options for immediately replacing him.

Rudy Giuliani tells ABC News he’s working as part of the president’s defense team in his upcoming second impeachment trial — and that he’s prepared to argue that the president’s claims of widespread voter fraud did not constitute incitement to violence because the widely-debunked claims are true. Said Giuliani: “I’m involved right now … that’s what I’m working on.”

Although Rudy Giuliani claimed he was representing Donald Trump in his upcoming impeachment trial, White House spokesman Hogan Gidley says no decision has been made:

“President Trump has not yet made a determination as to which lawyer or law firm will represent him for the disgraceful attack on our Constitution and democracy, known as the ‘impeachment hoax.’ We will keep you informed.”

Following his meeting with President Trump on Friday, MyPillow CEO Mike Lindell said in a Facebook interview that he’s praying that the military presence in Washington for the inauguration is part of Trump’s plan to retain power

Sen. Ben Sasse (R-NE) condemned the Republican Party for nourishing QAnon and other conspiracy theories in The Atlantic.

He says the insurrection at the U.S. Capitol was “not a protest gone awry or the work of ‘a few bad apples.’ It is the blossoming of a rotten seed that took root in the Republican Party some time ago and has been nourished by treachery, poor political judgment, and cowardice.”

“When Trump leaves office, my party faces a choice: We can dedicate ourselves to defending the Constitution and perpetuating our best American institutions and traditions, or we can be a party of conspiracy theories, cable-news fantasies, and the ruin that comes with them. We can be the party of Eisenhower, or the party of the conspiracist Alex Jones. We can applaud Officer Goodman or side with the mob he outwitted. We cannot do both.”

Politico: “A plane carrying Russian opposition leader Alexei Navalny landed Sunday in Moscow, where he faces the threat of arrest. But the flight landed at a different airport than had been scheduled, a possible attempt to outwit journalists and supporters who wanted to witness the return.”

“Navalny, who is President Vladimir Putin’s most prominent and determined foe, was returning from Germany, where he spent five months recovering from poisoning by a nerve agent, which he blames on the Kremlin.”

Tom Gardner looks at the 17 Republican senators most likely to convict Donald Trump in his upcoming impeachment trial.  The bottom line: Five GOP senators are almost certain to convict, while the additional 12 will probably follow Sen. Mitch McConnell’s lead.

President Trump is preparing to issue around 100 pardons and commutations on his final full day in office Tuesday, a major batch of clemency actions that includes white collar criminals, high-profile rappers and others but — as of now — is not expected to include Trump himself, CNN reports.

“As President Trump prepares to leave office in days, a lucrative market for pardons is coming to a head, with some of his allies collecting fees from wealthy felons or their associates to push the White House for clemency,” the New York Times reports.

“The brisk market for pardons reflects the access peddling that has defined Mr. Trump’s presidency as well as his unorthodox approach to exercising unchecked presidential clemency powers. Pardons and commutations are intended to show mercy to deserving recipients, but Mr. Trump has used many of them to reward personal or political allies.

Rep. Adam Schiff, the chairman of the House Intelligence Committee, told CBS News that he doesn’t believe President Trump should receive intelligence briefings after he leaves office, as he “can’t be trusted” with the nation’s secrets.

Said Schiff: “There is no circumstance in which this president should get another intelligence briefing — not now, not in the future. I don’t think he can be trusted with it now, and in the future he certainly can’t be trusted.”

A senior administration official confirms to CBS News that the wording that has appeared on President Trump’s schedule lately — “President Trump will work from early in the morning until late in the evening. He will make many calls and have many meetings.” — was written by Trump himself.

Sen. James Lankford (R-OK) apologized to Black Tulsans on Thursday for not recognizing that his involvement in questioning presidential election results would offend them, Tulsa World reports.

Lankford acknowledges that his actions “caused a firestorm of suspicion among many of my friends, particularly in Black communities around the state. I was completely blindsided, but I also found a blind spot.”

“President Trump’s top economic adviser criticized his boss’s handling of the riot at the U.S. Capitol and said he was disappointed in the way Mr. Trump treated Vice President Mike Pence, while defending the administration’s policy legacy,” the Wall Street Journal reports.

Said Larry Kudlow: “I was hoping that he would come out quickly and make statements calling everybody back and stopping the violence.”

“The point is that we are all capable of believing things which we know to be untrue, and then, when we are finally proved wrong, impudently twisting the facts so as to show that we were right. Intellectually, it is possible to carry on this process for an indefinite time: the only check on it is that sooner or later a false belief bumps up against solid reality, usually on a battlefield.” — George Orwell, writing in 1946.

“Sen. Dick Durbin (D-IL), the incoming chair of the Senate Judiciary Committee, and Rep. Ayanna Pressley (D-MA) are unveiling legislation that would seek to end federal capital punishment, putting a focus on the issue as their party prepares to take over complete control of Congress, along with the White House,” NPR reports.

James Murdoch has castigated the US media to the Financial Times for the “toxic politics” threatening American democracy, saying proprietors are as culpable as politicians who “know the truth but choose instead to propagate lies.”

He added: “The damage is profound. The sacking of the Capitol is proof positive that what we thought was dangerous is indeed very, very much so. Those outlets that propagate lies to their audience have unleashed insidious and uncontrollable forces that will be with us for years.”

“New England Patriots coach Bill Belichick has turned down President Trump’s invitation to receive the Presidential Medal of Freedom in the wake of the riots last week at the U.S. Capitol,” the Wall Street Journal reports.

“Belichick’s pivot is a sharp rebuke of a president who has faced calls from Democratic lawmakers, and some Republicans, to be removed from office.”