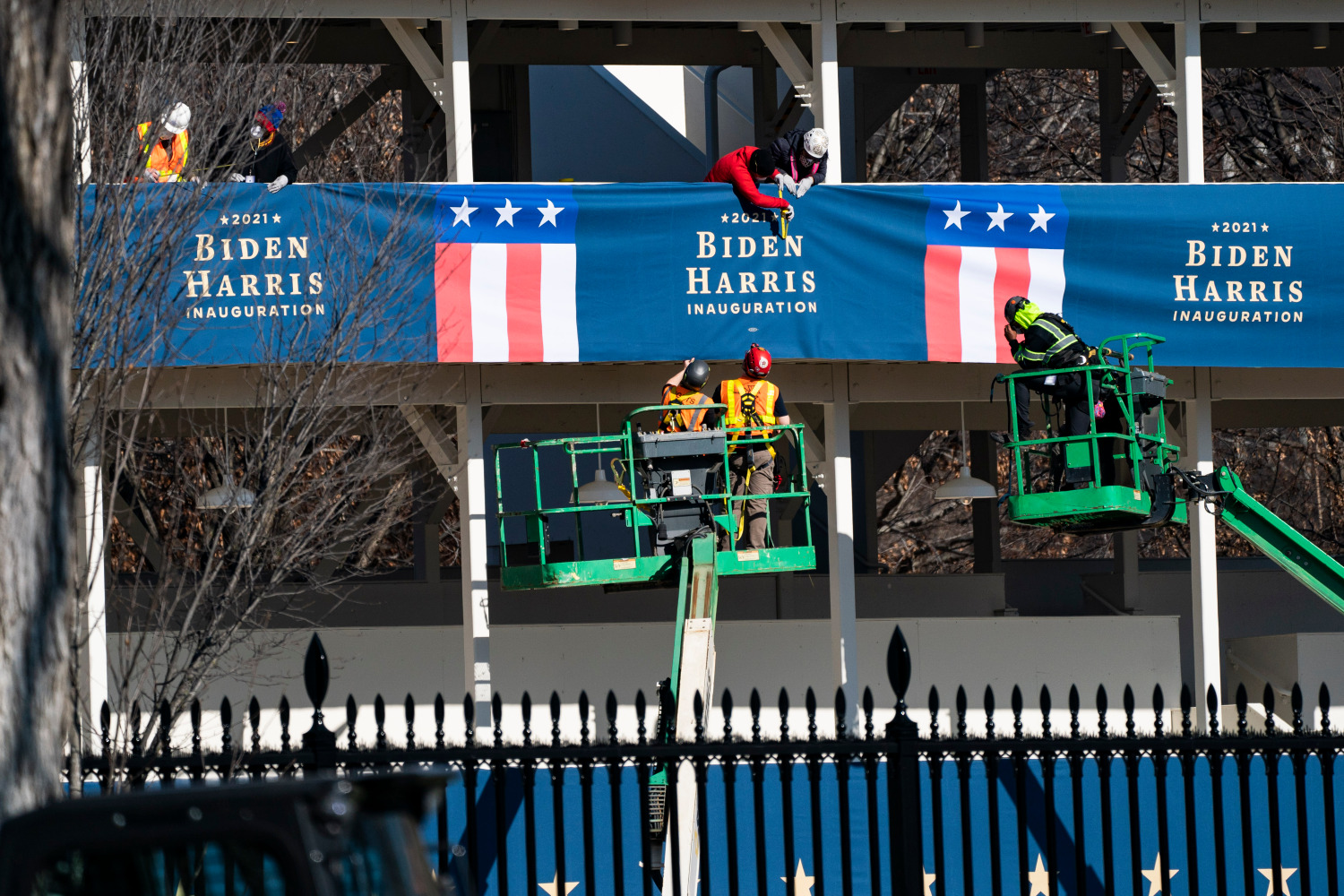 Federal prosecutors offered the most chilling description yet of rioters who seized the Capitol last week, writing in a new court filing that the intention was “to capture and assassinate elected officials,” CNN reports.

“The view was included in a memo seeking to keep Jacob Anthony Chansley, who rallied people inside the Capitol using a bullhorn, in detention. According to Capitol Police information included in the filing, Chansley was notable for his headdress, face paint and carrying of a six-foot spear.”

Wrote prosecutors: “Strong evidence, including Chansley’s own words and actions at the Capitol, supports that the intent of the Capitol rioters was to capture and assassinate elected officials in the United States government.”

“Federal prosecutors on Thursday for the first time described last week’s assault on the U.S. Capitol as a ‘violent insurrection that attempted to overthrow the United States Government’ — and one they consider to still be underway,” Politico reports.

“FBI and Justice Department officials have emphasized that more serious charges are on the horizon, after an initial round of lesser charges were leveled to ensure they corralled some of the most dangerous offenders.”

“The violent mob that stormed the U.S. Capitol on Jan. 6 came perilously close to Vice President Pence, who was not evacuated from the Senate chamber for about 14 minutes after the Capitol Police reported an initial attempted breach of the complex — enough time for the marauders to rush inside the building and approach his location,” the Washington Post reports.

“Secret Service officers eventually spirited Pence to a room off the Senate floor with his wife and daughter after rioters began to pour into the Capitol, many loudly denouncing the vice president as a traitor as they marched through the first floor below the Senate chamber.”

A new video, found in an archive of data uploaded to Parler, includes a fresh look at the mob’s confrontation with Eugene Goodman, the officer credited for luring rioters away from senators during the early moments of the Capitol riot.

A must-read in the New Yorker from Luke Mogelson: “The Capitol was breached by Trump supporters who had been declaring, at rally after rally, that they would go to violent lengths to keep the President in power. A chronicle of an attack foretold.”

“Three days before thousands of rioters converged on the U.S. Capitol, an internal Capitol Police intelligence report warned of a violent scenario in which ‘Congress itself’ could be the target of angry supporters of President Trump on Jan. 6, laying out a stark alert that deepens questions about the security failures that day,” the Washington Post reports.

“In a 12-page report on Jan. 3, the intelligence unit for the congressional police force described how thousands of enraged protesters, egged on by Trump and flanked by white supremacists and extreme militia groups, were likely to stream into Washington armed for battle.”

“When Health and Human Services Secretary Alex Azar announced this week that the federal government would begin releasing coronavirus vaccine doses held in reserve for second shots, no such reserve existed… The Trump administration had already begun shipping out what was available beginning at the end of December, taking second doses directly off the manufacturing line,” the Washington Post reports.

“Now, health officials across the country who had anticipated their extremely limited vaccine supply as much as doubling beginning next week are confronting the reality that their allocations will not immediately increase, dashing hopes of dramatically expanding eligibility for millions of elderly people and those with high-risk medical conditions.”

“Prosecutors in Georgia appear increasingly likely to open a criminal investigation of President Trump over his attempts to overturn the results of the state’s 2020 election, an inquiry into offenses that would be beyond his federal pardon power,” the New York Times reports.

“Vice President Mike Pence telephoned Vice President-elect Kamala Harris Thursday to congratulate her and offer his assistance ahead of next week’s swearing-in, the latest indication that Mr. Pence is filling the leadership role all but abdicated by President Trump,” the New York Times reports.

“The conversation, which was relayed by two officials briefed on the call, was described as gracious and pleasant. The discussion is the first time Mr. Pence and Ms. Harris have spoken since they debated each other last fall.”

“Speaker Nancy Pelosi said on Friday that House impeachment managers were preparing to prosecute President Trump in the Senate, but she refused to offer a timeline for when they would move forward with a never-before-attempted trial of a former president,” the New York Times reports.

Pelosi warned that “if in fact it is found that members of Congress were accomplices to this insurrection, if they aided and abetted the crime, there may have to be actions taken beyond the Congress in terms of prosecutions,” Politico reports.

“Lawmakers who interacted with the pro-Trump protesters who rioted at the Capitol last week could face criminal charges and will almost certainly come under close scrutiny in the burgeoning federal investigation into the assault,” Politico reports.

“Unlike with the president, there’s no Justice Department policy shielding members of Congress from legal accountability while in office.”

The criminal charges, found in online court records Wednesday, are misdemeanors punishable by up to $1,000 and a year in jail.

President-elect Joe Biden will no longer be taking an Amtrak train to Washington for his inauguration because of security concerns, the AP reports.

“In the last week, the State Department announced significant policies on Yemen, Cuba, Taiwan and Iran that senior Trump administration officials insist they have been pushing for months, if not years, but that critics label as motivated more by politics than policy.”

” The hearing will take place at noon via WebEx. It will occur virtually, since senators are in recess until Jan. 19. The hearing will be held by the Senate Intelligence Committee, whose top Democrat is Mark Warner of Virginia.”

“Iran has taken a new step toward possible atomic-weapons production, United Nations inspectors said in a confidential report, starting work on an assembly line to manufacture a key material at the core of nuclear warheads and raising the stakes in Tehran’s standoff with Washington ahead of President-elect Joe Biden’s inauguration,” the Wall Street Journal reports.

“We squandered the best opportunity we had on North Korea…With Putin we didn’t get anything done. We’re nowhere with China on national security. We’re in a worse place today than we were before he came in, and I didn’t think that was possible.”  — Former Secretary of State Rex Tillerson, quoted by Foreign Policy, on President Trump’s foreign policy legacy.

Roll Call: “The Constitution states, ‘When the President of the United States is tried the Chief Justice shall preside.’ Roberts presided over Trump’s first impeachment trial a year ago, just the third such trial in history.”

“But what happens when Trump leaves office on Jan. 20 — before the trial starts — and becomes a former president of the United States? Must the chief justice still preside over the trial? Could he choose to do so? Or does [that role] fall to the presiding officer of the Senate, the new vice president, Kamala Harris? Or can the Senate have its president pro tempore, at that time Vermont Democratic Sen. Patrick J. Leahy, preside? … Constitutional and congressional experts have no certain answer.”

“Biden will detail his plan later Friday, after unveiling his push for a new pandemic relief package from Congress and appointing a series of new medical advisers. None of the announcements, however, used the Warp Speed brand that Trump’s administration created.”

“President-elect Joe Biden plans to use FEMA and the National Guard to build coronavirus vaccine clinics across the United States,” CNBC reports.

“The Biden administration will also ‘quickly jumpstart’ efforts to make the vaccines available at local pharmacies across the U.S., which should ensure that Americans have access to doses at facilities only miles from their home.”

“President Trump and top aides in the White House aggressively pushed the get-tough policy that led migrant children to be separated from adults at the border with Mexico, according to a top Justice Department official in a new report from the department’s inspector general and other internal documents,” the New York Times reports.

“In the report, formally released on Thursday, Gene Hamilton, a top official, said the policy was put in place after complaints by the president and others at the White House involved in carrying out his immigration agenda.”

“The National Rifle Association said Friday that it has filed for bankruptcy in U.S. court as part of a larger restructuring plan aimed at removing its footprint in New York for Texas,” CNBC reports.

“The gun-rights advocacy group said it would restructure as a Texas nonprofit to exit what it said was a ‘a corrupt political and regulatory environment in New York,’ where it is currently registered.”

MyPillow CEO Mike Lindell went to a meeting at the White House today with notes suggesting “martial law if necessary,” the Independent reports.

“The notes, captured by a photographer as Mr Lindell entered the Oval Office on Friday, come after Mr Lindell tweeted then deleted calls for the president to ‘impost martial law’ in the seven battleground states that won the election for Joe Biden.”

CNN: “Trump has been consumed by the unraveling of his presidency during his last days in office, according to people around him, which included a casual discussion among advisers recently about a possible resignation.”

“Trump shut the idea down almost immediately. And he has made clear to aides in separate conversations that mere mention of President Richard Nixon, the last president to resign, was banned.”

“He told one adviser during an expletive-laden conversation recently never to bring up the ex-president ever again. During the passing mention of resigning this week, Trump told people he couldn’t count on Vice President Mike Pence to pardon him like Gerald Ford did Nixon, anyway.”

“Frustrated by the loss of his Twitter account and forced to accept that he soon must leave office, President Trump has effectively stopped doing his job, delegating daily responsibilities to Vice President Mike Pence while hunkering down with a shrinking group of acquiescent aides and contemplating additional presidential pardons,” the Los Angeles Times reports.

“Trump had considered leaving the White House before his final day in office Wednesday, even as early as this weekend, but he has opted to depart on the morning of President-elect Joe Biden’s Inauguration Day, according to two people familiar with discussions who cautioned that, with Trump, plans are always subject to change.”

“Intrigued by the idea of upstaging Biden, the ever self-centered president has requested a major sendoff. It would begin with a throng of cheering, flag-waving staffers and supporters to see him off on the White House’s South Lawn, and continue to a more formal ceremony at Joint Base Andrews, featuring a red carpet, military band, color guard and 21-gun salute. He’ll make his final Air Force One flight to Florida, to take up residence at Mar-a-Lago, his West Palm Beach, Fla., estate.”