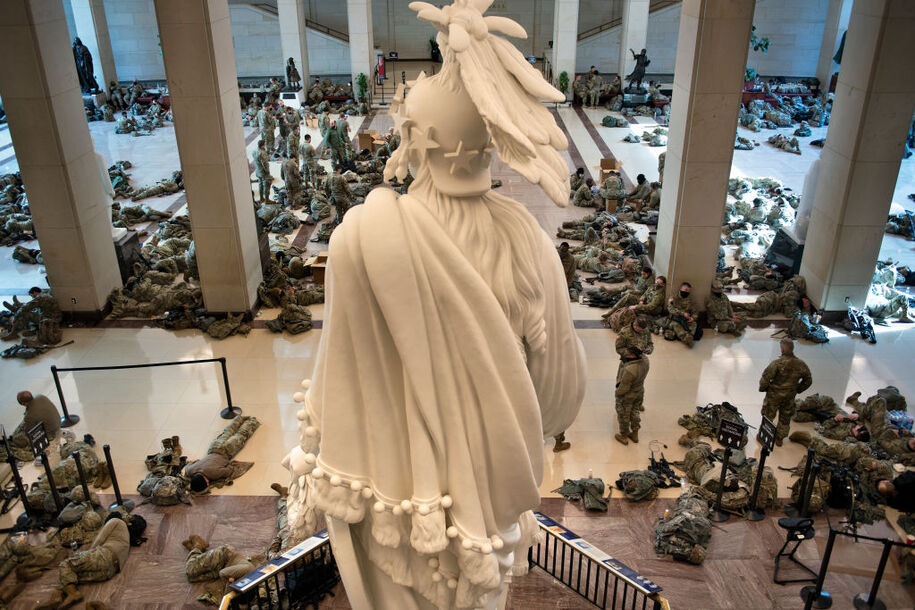 Trump now faces a Senate trial after his term ends, when the upper chamber could vote on barring him from future elective office if he is convicted. The vote was 232 to 197 with four members not voting.

“President Trump is set to be impeached, again, on Wednesday, but this time, he will lack the megaphone of Twitter to respond and be without a robust and aggressive defense from his White House and allies,” NBC News reports.

“But the silence from the president shouldn’t be interpreted as submission, those close to him say. Instead, Trump continues to cling to his false assertion that he won the election and is refusing pleas that he leave office days before his term expires because of his role in the deadly attack on the U.S. Capitol.”

“Trump, who would be the first president to be impeached twice, remains both defiant and sullen, said one former White House official who is familiar with his current discussions.”

Jonathan Bernstein: “He acts on impulse, not political incentives, so it’s hard to know. It is worth reminding everyone that when Republican leaders went to the White House in August 1974, before Nixon resigned, they were able to tell him that impeachment and removal were certain, with Nixon down to fewer than 20 supporters in the Senate, and perhaps fewer than 10. They could also hope to persuade Nixon not to put the nation — and the party — through more torment, especially with midterm elections coming.”

“It’s unlikely that Republican leaders in Congress now believe that Trump cares about either the nation or the party.”

MCCONNELL. Sen. Mitch McConnell (R-KY) told his Republican colleagues concerning an impeachment trial, via ABC News: “While the press has been full of speculation, I have not made a final decision on how I will vote and I intend to listen to the legal arguments when they are presented to the Senate.”

“This would represent one of the most shocking and damning votes in the history of American politics, by the most powerful Republican in Congress. McConnell’s vote would open the door to the possibility that Trump could be convicted and prohibited from running for president again.”

A former senior Trump administration official tells CNBC that he believes there are enough Republican votes in the Senate to convict and remove President Trump if they get articles of impeachment from the House.

“Top Republicans want to bury President Trump, for good. But they are divided whether to do it with one quick kill via impeachment, or let him slowly fade away,” Axios reports. “Senate Majority Leader Mitch McConnell would be more likely than not to vote to convict Trump — a green light for other Republican senators to follow.”

“House Republican Leader Kevin McCarthy would love a Trumpless world, but doesn’t want to knife him with fingerprints. This school of thought wants to let Trump do himself in, without a big party fight over his sins and sentence.”

Washington Post: The GOP inches toward a desperate decoupling with Trump.

CENSUS. “The U.S. Census Bureau has halted all work on President Trump’s directive to produce a state-by-state count of unauthorized immigrants that would have been used to alter a key set of census numbers,” NPR reports.

“Senior career officials at the bureau instructed the internal team assigned to carry out Trump’s presidential memo to stand down and cease their work immediately on Tuesday night.”

“The move by civil servants effectively ends the bureau’s participation in Trump’s bid to make an unprecedented change to who is counted in the 2020 census numbers that will be used to reallocate each state’s share of congressional seats and Electoral College votes for the next decade.”

NATIONAL GUARD. “There are more troops right now in Washington DC than in Afghanistan. And they are here to defend us against the commander in chief, the President of the United States and his mob.” — Rep. Seth Moutlon (D-MA), arguing on the House floor in favor of impeaching President Trump.

“National Guard units are being told to prepare for the possibility that improvised explosive devices will be used by individuals plotting to attack the Capitol in the days surrounding the Inauguration,” Politico reports.

New York Times: “As up to 15,000 troops continued to arrive in Washington from all over the country, Defense Department officials had been weighing whether to deploy them with arms. Mr. McCarthy has decided that at the very least those around the Capitol building will carry weapons, said the officials, who confirmed the decision on the condition of anonymity.”

“Mr. McCarthy’s decision came after a meeting with Speaker Nancy Pelosi, Democrat of California. Ms. Pelosi, according to congressional staff members, demanded that the Pentagon take a more muscular posture after a mob, egged on by President Trump last week, breached the Capitol.”

SOCIAL MEDIA BANS. YouTube said last night that it had removed new content from President Trump’s channel and banned him from uploading any videos or livestreams for at least a week.

Google informed its advertising partners Wednesday that beginning Jan. 14, its platforms will block all political ads, as well as any related to the Capitol insurrection, “following the unprecedented events of the past week and ahead of the upcoming presidential inauguration,” Axios reports.

COVID. “The United States on Tuesday reported a record-high number of 4,327 new Covid-19 deaths, according to data from Johns Hopkins University,” CNN  reports. “The latest figures bring the nationwide death toll to 380,670.”

“The U.S. government is expected to require all international airline passengers to show proof of a negative Covid-19 test before boarding flights to the country,” the Wall Street Journal reports.

AIDING AND ABETTING. Ali Alexander, who organized the ‘Stop the Steal’ rally that let to a mob storming the U.S. Capitol, told the Washington Post that he hatched the plan — coinciding with Congress’s vote to certify the electoral college votes — alongside three GOP lawmakers: Reps. Andy Biggs (R-AZ), Mo Brooks (R-AL) and Paul A. Gosar (R-AZ), all hard-line Trump supporters.

A video shows Rep. Paul Gosar (R-AZ) at a rally promoting the January 6 rally that turned into a mob storming the U.S. Capitol. Said Gosar: “You get to go back home once we conquer the Hill. Donald Trump is returned to being president.”

Rep. Mikie Sherrill (D-NJ) made a startling claim that some members of Congress led groups of people through the Capitol Building on a “reconnaissance” tour one day before the riot that laid a deadly siege on the government’s legislative branch, the Bergen Record reports.

Said Sherrill: “I’m going to see they are held accountable, and if necessary, ensure that they don’t serve in Congress.”

SELF PARDON. Politico: “An unprecedented move by President Trump to grant himself a pardon during his remaining days in office could divide his handpicked Supreme Court majority. Court-watchers are bracing for an epic, intra-Federalist Society clash that could determine whether Trump — and future presidents — can declare themselves immune from criminal investigations even after leaving the White House.”

“While most of the justices claim to be both textualists — meaning that they adhere closely to the literal words of the Constitution— and originalists — who believe the intent of the founders is crucial to interpreting the law — cleavages sometimes emerge and they might do so again in a case over the validity of a Trump self-pardon.”

GRAHAM TO LEAD SENATE DEFENSE WHILE WH IS SILENT. “Sen. Lindsey Graham (R-SC) is leading the charge against President Donald Trump’s impeachment and removal in the Senate, even as the White House remains largely uninvolved,” Politico reports.

“Graham, who just last week said he had had ‘enough’ of Trump’s bid to overturn the election results after he incited a deadly riot at the Capitol, has been calling around to Republican senators urging them to oppose convicting the president in the Senate’s expected impeachment trial, according to three people familiar with the effort.”

“On the day he will be impeached for a history-making second time, President Trump lacks a comprehensive legal strategy, has nothing on his public schedule and is without his preferred social media methods of responding — in part because his son-in-law put a stop to efforts establishing his presence on fringe platforms after he was banned from Twitter,” CNN reports.

“It amounts to near-invisibility for the President at the most perilous moment of his presidency, which is ending in tumult and dramatic rebuke from members of his own party.”

President Trump issued a statement via the White House press shop — which reads like a tweet — calling for “NO violence” and “NO lawbreaking,” which Republican lawmakers have been pleading with him to say.

REBELLING AGAINST METAL DETECTORS. At least 10 Republican members of Congress refused to walk through metal detectors installed Tuesday as a security measure after the Jan. 6 riot at the Capitol, the HuffPost reports.

“Biden is also expected to enhance Power’s role by elevating the position to membership on the National Security Council.”

Said Rosen: “I want to send a clear message to anyone contemplating violence, threats of violence or other criminal conduct: We will have no tolerance whatsoever for any attempts to disrupt the peaceful transfer of power on Jan. 20 that our Constitution calls for. We will have no tolerance for any attempts to forcefully occupy government buildings. There will be no excuse for violence, vandalism or any other form of lawlessness.”

INAUGURAL NIGHT. “President-elect Joe Biden’s inaugural committee is producing a television special for the night of his inauguration next week in lieu of the normal in-person festivities,” Politico reports.

“The prime-time event will air on broadcast channels ABC, CBS and NBC but not Fox. Cable news networks CNN and MSNBC will carry it live. Fox News will not.”

CONGRESSIONAL TRAUMA. Rep. Alexandria Ocasio-Cortez (D-NY) revealed during an Instsgram live stream there were “traumatizing” moments during the Jan. 6 riot at the U.S. Capitol when she legitimately feared for her life.  Said Ocasio-Cortez: “I thought I was going to die. I did not know if I was going to make it to the end of that day alive.”

She added: “I didn’t even feel safe going to that extraction point because there were QAnon and white supremacist members of Congress who I felt would disclose my location and create opportunities to allow me to be hurt.”

Greene insisted in her tweet that Trump will remain in office.

Said Crow: “There are, unfortunately, a handful of members of Congress — and Mrs. Taylor Green is just one of them — who are morally bankrupt. They are depraved, and they’re frankly dangerous individuals.”

Rep. Norma Torres (D-CA) gave an emotional account of her experience during the violent riot at the Capitol last week.