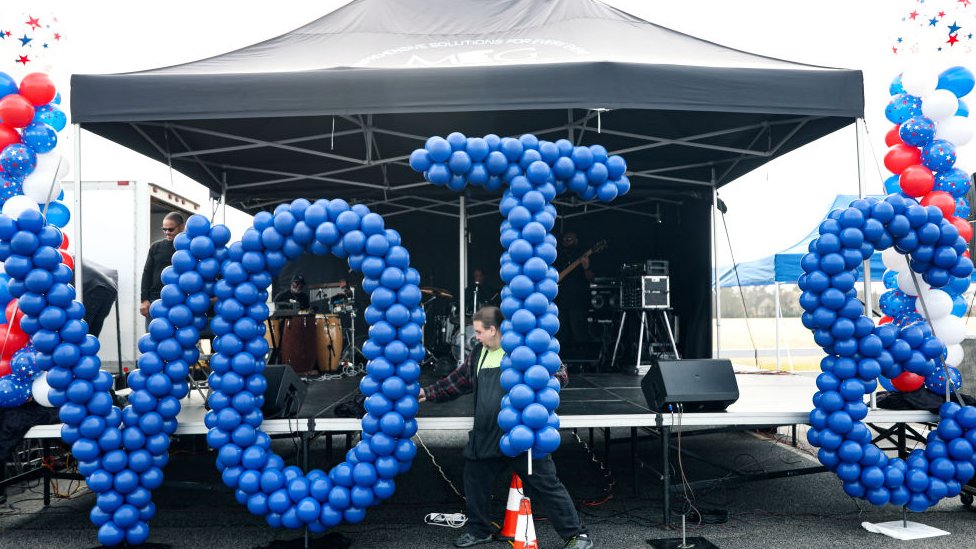 “The acting U.S. attorney for Northern Georgia, who was named after his predecessor reportedly angered President Trump for not finding election fraud, told staffers in a conference call Monday that he dismissed two election fraud cases on his first day,” the Atlanta Journal Constitution reports.

Said Bobby Christine: “I closed the two most — I don’t know, I guess you’d call them high profile or the two most pressing election issues this office has. I said I believe, as many of the people around the table believed, there’s just nothing to them.”

“Georgia Gov. Brian Kemp (R) strongly endorsed adding photo ID requirements for absentee ballots on Monday at the start of a legislative session that’s sure to be shaped by a debate over voting laws after epic turnout helped Democrats flip Georgia in the race for president and sweep the Senate runoffs,” the Atlanta Journal Constitution reports.

A new Politico/Morning Consult poll pegs President Trump’s approval at just 34%, the lowest in four years of tracking opinions of the president’s job performance. More than six in 10 voters — 63% — disapprove.

“The breakup between the business world and the Republican Party is rapidly accelerating in the wake of last week’s deadly pro-Trump riot at the Capitol, posing a serious financial threat to the party just as it’s being stripped of power in Washington,” Politico reports.

“Ten major companies so far, including some of the biggest corporate givers in politics, have decided to withhold contributions to Republican lawmakers who objected to the certification of the Electoral College votes, and dozens more are stopping all of their political donations after the riot.”

New York Times: “The moves are notable because corporations and their employees are active players in the political process, making campaign contributions through PACs and helping politicians raise funds in myriad ways.”

The Trump campaign has not used its millions-strong email list since the riots at the Capitol, Vice News reports.  Salesforce, its email provider, says it has taken action to prevent Republicans from using “our services in any way that could lead to violence.”

“He has no future in the Republican Party. When the base of the party is not booing you, but chanting hang you, that’s a bad sign.”  — Former GOP strategist Stuart Stevens, quoted by the Washington Post, on Vice President Mike Pence.

ALASKA SENATOR–In response to last week’s terrorist attack on the Capitol and Donald Trump’s role in fomenting it, Alaska Sen. Lisa Murkowski suggested she might leave the GOP, saying, “[I]f the Republican Party has become nothing more than the party of Trump, I sincerely question whether this is the party for me.” Murkowski later clarified, though, that she would “[a]bsolutely, unequivocally not” join the Democratic caucus in the Senate.

If she did, however, become an independent, she’d still have a well-defined path to re-election in 2022 thanks to a new ballot measure Alaska voters passed in November that radically reforms how elections are conducted in the state. Under Measure 2, all candidates from all parties will now run together on a single primary ballot, with the top four vote-getters advancing to a November general election. Voters would then choose a winner from that quartet by means of an instant runoff, greatly reducing the chance of a spoiler effect and giving popular, relatively moderate politicians like Murkowski the chance to prevail even without a party banner.

PENNSYLVANIA SENATOR–The same day he told the Philadelphia Inquirer that he was taking a “serious look” at a Senate bid, Democratic Lt. Gov. John Fetterman filed paperwork with the FEC—and he’s already put his nascent campaign committee to good use. In a press release, Fetterman says he’s raised $500,000 since his remarks first appeared in the Inquirer on Friday, via 15,000 contributions.

Meanwhile, former Republican Rep. Ryan Costello, who unsuccessfully tried to goad Fetterman with some feeble Twitter trash-talk about his own interest in a Senate bid, is reportedly “expected to form an exploratory committee” sometime “soon.” Costello has set himself up for a difficult GOP primary, though, since he said he’d campaign on an explicitly anti-Trump platform: In response to an RNC spokesperson slamming Republicans for having “abandoned” Trump, Costello recently tweeted, “If I run I will literally take this entire bullshit head on.”

CONNECTICUT GOVERNOR–The Connecticut Post describes New Britain Mayor Erin Stewart, who last year confirmed she was considering another bid for governor, as a “likely Republican entrant” for the race to take on Democratic Gov. Ned Lamont in 2022, though we haven’t heard directly from her since the election. Stewart briefly sought the GOP nod in 2018 but dropped out to run for lieutenant governor instead; however, she lost that primary 48-33 to state Sen. Joe Markley. Since her failed bids for higher office, she’s sought to push the Connecticut GOP in a moderate direction in a bid to regain relevance and offered some very indirect criticism of Trump in the wake of last week’s insurrection at the Capitol.

ALABAMA CD 5–Alabama Gov. Kay Ivey all but called for a primary challenge to Rep. Mo Brooks, a fellow Republican, after Brooks helped foment last week’s violent assault on the Capitol, saying, “If the people of the 5th District believe their views are not being properly represented, then they need to express their disappointment directly to Congressman Brooks and, if necessary, hold him accountable at the ballot box.”

Just before the invasion of the Capitol complex, Brooks incited the pro-Trump brigades that had descended on Washington, D.C. to overturn the results of the November election, telling them, “Today is the day American patriots start taking down names and kicking ass.” Brooks refused to back down following the violence, saying “I make no apology” for instigating the attacks and adding, “I call again for kicking that ‘ass’ all the way back to the communist dictatorships that ‘ass’ now worships.”

In 2017, after Brooks launched an ultimately fruitless challenge to appointed GOP Sen. Luther Strange, some pissed-off establishment Republicans sought to primary Brooks in response and rallied around Army veteran Clayton Hinchman. Brooks wound up prevailing the following year, but by a relatively soft 61-39 margin. Hinchman hasn’t said anything about a possible rematch, but during his race, he chided Brooks for preferencing “ideology over pragmatism,” a criticism that suggests he might side with Ivey’s views of the congressman.

ALASKA STATE HOUSE–The Alaska Supreme Court has rejected a challenge by former state Rep. Lance Pruitt, who as minority leader had been the most senior Republican in the state House, to his 11-vote loss in the November elections, upholding Democrat Liz Snyder as the winner. The decision confirms that Democrats and their allies will have control over 20 seats in the 40-member chamber as the legislature gears up to start its new session on Jan. 19, though they’ll need at least one more Republican defection to take control.

OREGON CD 5–Democratic Rep. Kurt Schrader prompted a massive outcry—and may have opened himself up to a primary challenge—when he opposed impeaching Donald Trump and compared the idea to a “lynching” on a call with fellow House Democrats on Friday. Just hours after his remarks were first reported, Schrader issued an apology, and the following day he came out in favor of impeachment, but the damage may have already been done.

In response to Schrader’s comments, Rep. Suzanne Bonamici, who represents a neighboring district, took the unusual step of publicly upbraiding her colleague. “Comparing a lynching to holding the President accountable is hurtful and insensitive and ignores the overt white supremacy on display during the insurrection Wednesday,” she said. Of more immediate impact, Schrader’s longtime consultant, Mark Wiener, immediately dropped the congressman as a client, saying, “Comparing the impeachment of a treasonous President who encouraged white supremacists to violently storm the Capitol to a ‘lynching’ is shameful and indefensible.”

Meanwhile, the Democratic Party in Polk County, which makes up about 10% of the 5th District, demanded that Schrader resign, citing not only his statements on impeachment but his vote last month against $2,000 COVID relief checks, which made him one of just two Democrats to oppose the measure (along with now-former Rep. Dan Lipinski). And Milwaukie Mayor Mark Gamba, who ran against Schrader from the left in last year’s primary, said he’d give it another go and started soliciting donations online.

Gamba, however, didn’t raise much money and lost by a wide 69-23 margin, which may explain why, in other comments, he indicated an openness to supporting an alternative option. One possibility would be state Rep. Paul Evans, who almost ran for this seat when it was last open in 2008 (a race ultimately won by Schrader) and whose legislative district is contained entirely in the 5th.

In fact, a great many Democratic legislators represent turf that overlaps with Schrader’s, with state Senate Majority Leader Rob Wagner and state Sen. Deb Patterson among the more prominent. In the House, aside from Evans, potential candidates could include Reps. Teresa Alonso Leon, Mark Meek, Karin Power, Rachel Prusak, and Andrea Salinas, among others.

One of Oregon’s most prominent politicians also hails from the area: newly elected Secretary of State Shemia Fagan, whose former district in the state Senate overlapped partly with Schrader’s House seat. With voting rights under siege, and as first in line to the governorship (Oregon has no lieutenant governor), Fagan likely has her sights elsewhere, but she’d be a formidable challenger.

Oregon’s 5th has long been swingy territory, but it shifted noticeably to the left last year, supporting Joe Biden 54-44, after backing Hillary Clinton 48-44 in 2016. Schrader actually ran behind the top of the ticket, however, turning in a 52-45 win against an unheralded Republican foe. The district currently takes in Portland’s southern suburbs and the Salem area but will likely be reconfigured in redistricting, particularly since the state is on track to add a sixth House seat.

NEW JERSEY CD 2–A consultant for Democrat Amy Kennedy, who lost to Republican Rep. Jeff Van Drew 52-46 in November, tells the New Jersey Globe that Kennedy hasn’t yet considered whether to run again but says she’s furious at the congressman for voting to overturn the results of the 2020 elections following Wednesday’s assault on the Capitol by pro-Trump mobs that left five people dead. Assemblyman Adam Taliaferro, who himself was a potential candidate against Van Drew last year, also encouraged Kennedy to seek a rematch, though he didn’t rule out a bid of his own should she decline.

The Globe mentions a bunch of other possible contenders, including Assemblyman Vince Mazzeo, Cape May County Democratic Party chair Brendan Sciarra, Cumberland County Commissioner Joe Derella, and former union leader Richard Tolson. Montclair State University professor Brigid Callahan Harrison, who lost the Democratic primary to Kennedy 62-22, is another option. None of these would-be candidates have spoken about their interest yet.