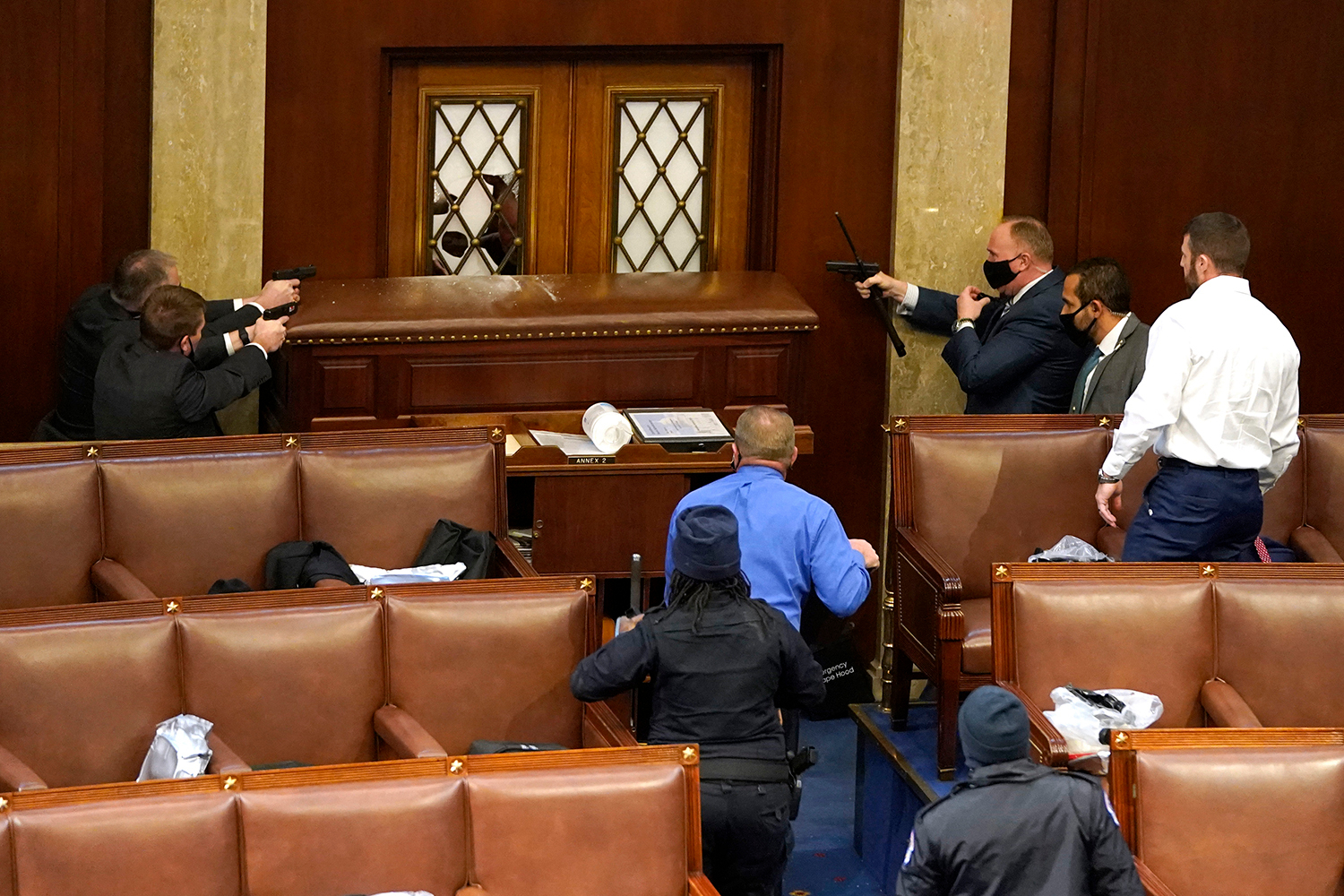 “Speaker Nancy Pelosi and House Democrats have secured enough votes to impeach President Trump for inciting an insurrection at the Capitol that left five dead. At least 218 Democrats have now signed onto an impeachment resolution, enough to pass the measure should it come to the floor later this week,” Politico  reports.

House Democrats on Monday formally introduced an article of impeachment against President Trump, charging him with “incitement of insurrection” for his role in the takeover of the Capitol last week by a violent pro-Trump mob, the Washington Post reports. The House could vote as early as Wednesday.

As many as 10 House Republicans are very seriously considering supporting impeaching President Trump — and GOP Conference Chair Liz Cheney (R-WY) is said to be one of them, Politico reports.

Politico: “Democrats are weighing how to fast-track their plans to impeach President Donald Trump this week as new details, images and video further fuel the rage over the deadly domestic terrorist attack on the Capitol and those who enabled it.”

“Don’t underestimate just how shaken members of Congress have been by last week’s attack. Lawmakers had to flee the House and Senate chambers just minutes before the mob broke in, and now they’re learning more about just how close we came to a much greater tragedy. They’re furious, and they want answers and accountability. And it’s not just Democrats who feel this way.”

White House counsel Pat Cipollone and former Attorney General Bill Barr have warned President Donald Trump that they do not believe he should pardon himself, CNN reports.

“House Republicans on Monday blocked a measure calling on Vice President Pence and Trump’s Cabinet to remove him under the 25th Amendment,” the  Washington Post reports.

“The procedural move by the GOP to block consideration of the measure under unanimous consent will force the full House to vote Tuesday on the resolution. The resolution pressures Pence to initiate proceedings to remove Trump in the wake of the attack on the Capitol by a pro-Trump mob and as calls from Trump’s impeachment grow.”

BuzzFeed News: Republicans are still trying to keep Trump in power even after he incited a deadly insurrection.

More than 300 historians and constitutional scholars have signed an open letter calling for the impeachment and removal of President Trump, saying his continuation in office after encouraging supporters to march on the U.S. Capitol posed “a clear and present danger to American democracy and the national security of the United States,” the New York Times reports.

Rep. Bonnie Watson Coleman (D-NJ), a 75-year-old cancer survivor, has tested positive for the coronavirus after taking shelter in a room with lawmakers who refused to wear masks during last week’s violent takeover of the Capitol by a pro-Trump mob, the Washington Post reports.

“President-elect Joe Biden plans to nominate William J. Burns, a former career diplomat who has served both parties and won respect at home and abroad, to run a CIA that has been badly battered by the Trump administration,” the Washington Post reports.

“The choice of Burns is the incoming administration’s last major personnel decision, and it highlights the qualities that characterize Biden’s foreign policy team. Burns is an inside player — brainy, reserved, collegial — and loyal to his superiors, sometimes to a fault, as he conceded in his 2019 memoir.”

Beshear denounced the protesters on Twitter, saying he wouldn’t be bullied.

The FBI has “received information about an identified armed group intending to travel to Washington, DC on 16 January. They have warned that if Congress attempts to remove POTUS via the 25th Amendment a huge uprising will occur,” according to a bulletin obtained by ABC Radioreports.

Yahoo News: “Federal authorities are warning state and local law enforcement about threats of possible violence by right-wing extremists at a series of protests planned for later this month in Washington and in state capitols.”

Washington, D.C., Mayor Muriel Bowser requests Interior secretary “cancel any and all public gathering permits in the District of Columbia, and deny any applications for a public gathering during the period January 11 – January 24,” ABC News reports.

Vanity Fair: “During the siege of the capitol, Melania was allegedly overseeing a photoshoot, perhaps for a post–FLOTUS coffee-table book about the watchful eye she brought to the White House that she has expressed interest in writing. Specifically: rugs. It seems Wednesday was rug day for the book, so you can see why she didn’t have time to find out more about the day’s events.”

Daily Beast: “In a deeply weird and jarring farewell statement posted by the White House early Monday morning, Melania first paid tribute to those who lost their lives in last week’s violence carried out in support of her husband, before going on to settle some scores against unspecified people who she claims have ‘attacked’ her over the past few days since the riots.”

“It’s not exactly clear what she’s referring to—it’s hard to believe that Melania has really been at the forefront of anyone’s mind since last week’s unprecedented assault on American democracy.”

Politico: “President-elect Joe Biden has grown frustrated with the team in charge of plotting his coronavirus response, amid rising concerns that his administration will fall short of its promise of 100 million vaccinations in the first 100 days.”

“Biden has expressed criticism on multiple occasions to groups of transition officials — including one confrontation where Biden conveyed to Covid coordinator Jeff Zients and his deputy, Natalie Quillian, that their team was underperforming. … In interviews, multiple senior transition officials defended Zients and stressed the enormity of the challenge, noting that the Trump administration has refused to share key information for weeks.”

The day before a pro-Trump mob stormed the U.S. Capitol, an arm of the Republican Attorneys General Association sent out robocalls urging supporters to come to D.C. to “fight” Congress over President Trump’s baseless election fraud claims, the Washington Post reports.

From the message: “At 1 p.m. we will march to the Capitol building and call on Congress to stop the steal. We’re hoping patriots like you will join us to continue to fight to protect the integrity of our elections.”

Politico: “The push for sweeping use of executive action has created a strange dynamic within the Democratic Party. Lawmakers are increasingly eager to cede their legislative power to Biden — but Biden says he doesn’t want it.”

“In addition to the pressure progressives are putting on Biden to immediately forgive student loan debt, they’re advocating for him to direct his attorney general to review the process for removing or reclassifying marijuana on the list of ‘scheduled substances,’ and to issue a national emergency declaration for the climate change crisis.”

NBC News: “There is also a deepening and widespread anger among Pence’s aides and allies at how Trump seemingly discarded his most devoted soldier over his refusal to circumvent an important constitutional duty, per these people. The president’s decision not to reach out to Pence and his family while they were sheltered inside a Capitol bunker as pro-Trump rioters breached the building has particularly rankled Pence and others in his orbit.”

“The vice president himself is ‘very upset’ that Trump didn’t do more to dissuade the mob, some of whom chanted for Pence’s execution.”

“Some House Republicans are privately discussing whether to censure President Trump as a way to express their disapproval about the President’s actions without going along with the Democratic effort to impeach him,” CNN reports.

“It’s unclear, though, whether they will ever get a chance to vote on such a plan. Democratic leaders have shown no willingness so far to schedule a vote on anything short of impeachment.”

Twenty-two former Republican members of Congress called for the impeachment of President Trump in a new letter, who they say “actively orchestrated an insurrection” against a co-equal branch of government.

President-elect Joe Biden said he’s already spoken with senators about a way to “bifurcate” President Trump’s impeachment trial so he could continue to advance his agenda, adding it’s “obvious” the House will move to impeach, ABC News reports.

Said Biden: “Can we go half day on dealing with the impeachment, and half a day getting my people nominated and confirmed in the Senate, as well as moving on the stimulus package — so that’s my hope and expectation.”

Associated Press: “In keeping with the theme of unity, the committee also announced that after he is officially inaugurated, Biden, Vice President-elect Harris and their spouses will lay a wreath at the Tomb of the Unknown Soldier in Arlington National Cemetery, and will be joined there by former Presidents Barack Obama, George W. Bush, Bill Clinton and their wives.”

Fiona Hill: “Some have said it’s not a coup because the U.S. military and other armed groups weren’t involved, and some because President Trump didn’t invoke his presidential powers in support of the mob that broke into the Capitol. Others point out that no one has claimed or proved there was a secret plan directed by the President, and that Trump’s efforts to overturn the outcome of the 2020 presidential election could never have succeeded in the first place.”

“These observations are based on the idea that a coup is a sudden, violent seizure of power involving clandestine plots and military takeovers. By contrast, Trump’s goal was to keep himself in power, and his actions were taken over a period of months and in slow motion.”

“But that doesn’t mean it wasn’t a coup attempt. Trump disguised what he was doing by operating in plain sight, talking openly about his intent. He normalized his actions so people would accept them. I’ve been studying authoritarian regimes for three decades, and I know the signs of a coup when I see them.”

“Facebook said it is removing all content mentioning ‘stop the steal,’ a phrase popular among supporters of President Trump’s claims about the election, as part of a raft of emergency measures to stem misinformation and incitements to violence on its platform in the lead up to President-elect Joe Biden’s inauguration,” the Wall Street Journal reports.