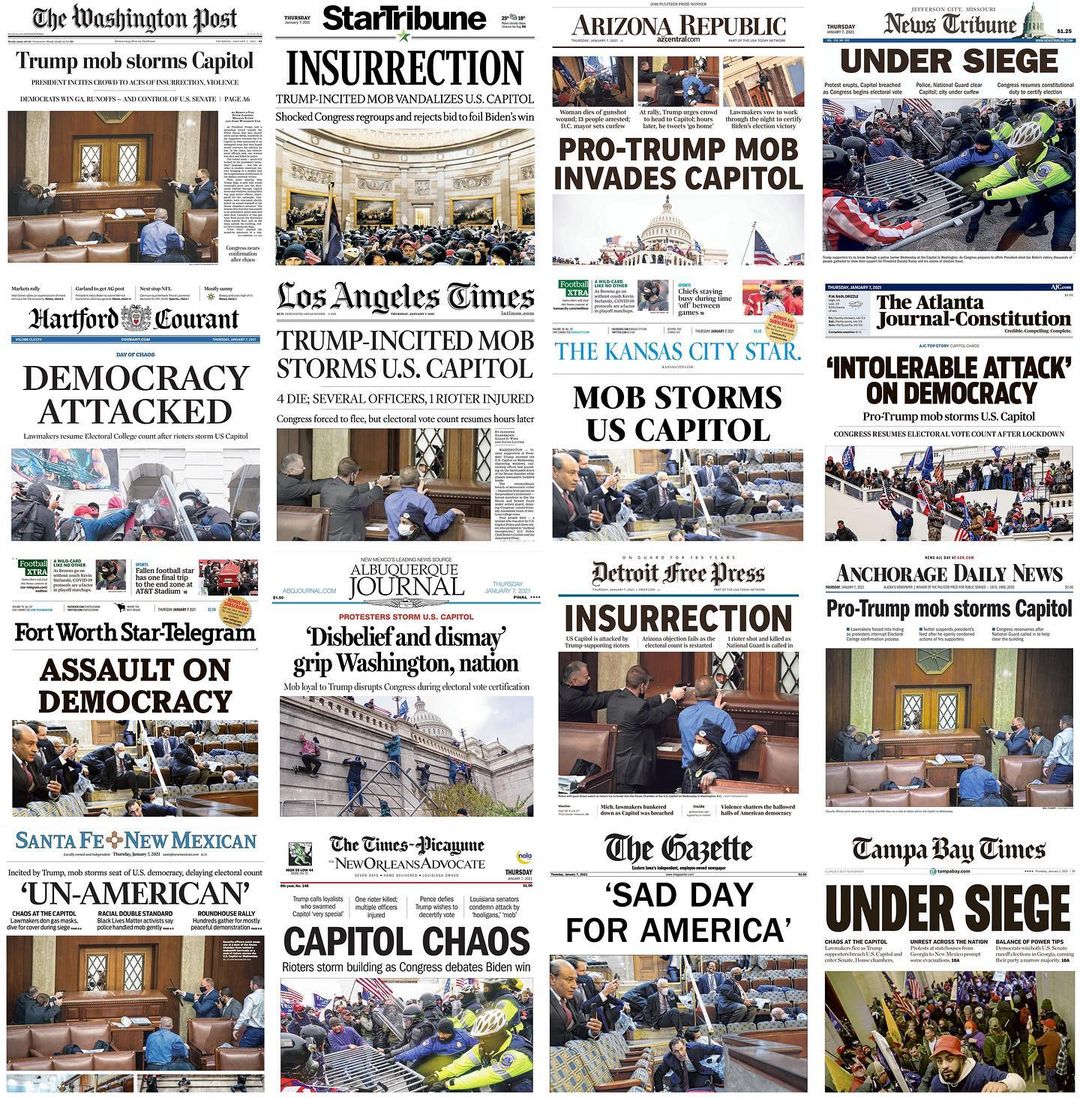 “Vice President Mike Pence has not ruled out an effort to invoke the 25th Amendment and wants to preserve the option in case President Trump becomes more unstable,” CNN reports.

“The source said there is some concern inside Pence’s team that there are risks to invoking the 25th Amendment or even to an impeachment process, as Trump could take some sort of rash action putting the nation at risk.”

“President Trump will not resign. Nor will he turn power over to Vice President Pence and ask him for a pardon, according to top White House advisers who have spoken with the highest ranking members of Mr. Trump’s Cabinet, including Treasury Secretary Mnuchin, Pence and chief of staff Mark Meadows,” CBS News reports.

“President Trump’s steadfast grip on Republicans in Washington is beginning to crumble, leaving him more politically isolated than at any other point in his turbulent administration,” the AP reports.

“After riling up a crowd that later staged a violent siege of the U.S. Capitol, Trump appears to have lost some of his strongest allies, including South Carolina Sen. Lindsey Graham. Two Cabinet members and at least a half dozen aides have resigned. A handful of congressional Republicans are openly considering whether to join a renewed push for impeachment.”

“Trump spent much of the day Saturday railing about Twitter taking his account, according to two officials. The president has not said anything about the five people who died in the attack, including a Capitol Police officer, nor has he moved to lower the flags of the U.S. government in their honor. He does not plan to make that order and has complained to advisers that he is being treated unfairly.”

President Trump at one point in the White House on Friday “literally yelled” the words, “I’M NOT GOING TO RESIGN,” before launching into a tirade about how Democratic lawmakers will regret their push to impeach him a second time, and that they are hurting “the country” by doing so, the Daily Beast reports.

“According to two sources with knowledge of the matter, the president and several close advisers are now discussing the possibility of Trump sitting for multiple media interviews in the coming days, in an attempt to boast about his time in office.”

New York Times: “Over the past several months, Parler has become one of the fastest-growing apps in the United States. Millions of President Trump’s supporters have flocked to it as Facebook and Twitter increasingly cracked down on posts that spread misinformation and incited violence, including muzzling Mr. Trump by removing his accounts this past week. By Saturday morning, Apple listed Parler as the No. 1 free app for its iPhones.”

“But hours later, Apple said it had removed Parler from its App Store. Google had made a similar move a day earlier.”

Amazon on Saturday kicked Parler off its Web hosting services, which means that unless it can find another host, once the ban takes effect on Sunday Parler will go offline, BuzzFeed News reports.

“House Democrats plan to move on a second impeachment of Donald J. Trump as early as Monday — and on Wednesday at the latest, depending on member travel,” Axios reports. There’s just one article in the four-page draft: “Incitement of Insurrection.”

“President Trump is considering having Rudy Giuliani and Alan Dershowitz defend him if he faces another impeachment trial,” CNN reports. It’s worth remembering that this Senate trial is almost certain to take place after he is out of office.

“News outlets are publishing more and more videos, photos and testimonials from Wednesday’s pro-Trump riot on Capitol Hill. And it’s becoming clear that as heinous as the attack looked in real time, on live TV and in our social feeds, it was even worse than we knew then,” CNN reports.

“A man photographed in the U.S. Capitol carrying a 6-foot spear and wearing a horned helmet as a pro-Trump mob breached the building Wednesday has been arrested and charged,” NBC Washington reports. Meanwhile, Florida authorities tell ABC News they’ve arrested one of the alleged Capitol rioters Friday night who was seen in a viral photograph carrying Speaker Nancy Pelosi’s lectern through the halls

A former member of the U.S. Air Force and combat veteran, Lieutenant Colonel Larry Rendall Brock Jr., told the New Yorker he was among the rioters who stormed the Capitol building earlier this week.

Brock was the man photographed near House Speaker Nancy Pelosi’s office and in the Senate chamber wearing tactical gear and holding zip tie restraints. Brock claimed he merely picked the zip ties up off the floor. Said Brock: “I know it looks menacing. That was not my intent.”

West Virginia Delegate Derrick Evans (R), who was seen on video with rioters going inside of the Capitol Wednesday, has announced his resignation from the West Virginia House of Delegates, WSAZ reports.

Just yesterday, Evans’ lawyer told WVNS-TV that he would not step down and he “committed no criminal act that day.”

New York Times: “Despite the talk of healing, however, Mr. Trump quietly made plans to take a trip next week to the southwestern border to highlight his hard-line immigration policies, which have inflamed Washington over the years…”

“He also told advisers he wanted to give a media exit interview, which they presumed might undercut any conciliatory notes. But the first family has discussed leaving the White House for good on Jan. 19, the day before the inauguration.”

Benjy Sarlin recalls the GOP warnings in 2015 and 2016 about Donald Trump: “One by one, Republican after Republican warned not just that Trump was wrong on policy or personally immoral, but that he was fomenting violence and undermining democracy by dehumanizing his political opponents and encouraging attacks on protestors.”

“Hypocrisy is obviously a normal feature of politics, from which no elected official is immune. Making alliances with rivals after a bitter campaign is as well.”

“But there’s not much precedent for a party packed with leaders who warned a rival is an immediate danger to democracy, decency, and truth itself and then got on board only to have some of them go on to profess shock that that figure did the very thing they warned all of us they would do.”

Seth Masket says political scientists warned us that something like insurrection at the U.S. Capitol would happen.

“Here’s another warning: This isn’t over. Maybe there will be more violence between now and Joe Biden’s inauguration, maybe not. But the forces that created Wednesday’s violence are still very much active and pose a significant threat to American democracy. The next time this crops up, let’s not say this can’t happen here. It already has, and it’s still happening.”

Andrew Sullivan: “Trump’s character and profound psychological deformation always, always meant he would not relinquish power without an almighty struggle. We elected an instinctual tyrant, preternaturally incapable of understanding the give and take of democratic politics, for whom losing in any contest threatens the core of his very being, and who has no effective control over the roiling emotions that course through his thickened arteries.”

“Some of us were ridiculed for saying from the very beginning that there would have to be some kind of violence to remove him, if he were to lose the next election. We still are. We’re called victims of TDS, or Trump Derangement Syndrome, as if this were not the only sane position when a delusional, malignant, tyrant-wannabe has an entire political party in his grip, aided and abetted by tribal media tools. For myself, from the very beginning, having examined Trump’s past and observed his plain-as-day pathology, I just couldn’t envision how this figure could psychologically, voluntarily ever leave the Oval Office. Every single day of his presidency has confirmed this. He has blown through every guardrail against presidential abuse that exists.”

“President Trump urged Georgia’s lead elections investigator to “find the fraud” in a lengthy December phone call, saying the official would be a ‘national hero,’” the Washington Post reports.

“Trump placed the call to the investigations chief for the Georgia secretary of state’s office shortly before Christmas — while the individual was leading an inquiry into allegations of ballot fraud in Cobb County, in the suburbs of Atlanta.”

The Houston Chronicle called for Sen. Ted Cruz (R-TX) to resign from the Senate: “We’re done with the drama. Done with the opportunism. Done with the cynical scheming that has now cost American lives. Resign, Mr. Cruz, and deliver Texas from the shame of calling you our senator.”

The San Antonio Express News calls for Cruz to be expelled from the Senate.

“Josh Hawley and Ted Cruz have positioned themselves as heirs to President Donald Trump’s base. But their decision to embrace Trump’s election challenge is fueling major blowback — even as they remain largely unrepentant after this week’s deadly riot,” Politico reports.

“Following the insurrection at the Capitol, the potential 2024 presidential candidates are facing Democratic calls to resign and charges from their own party that they incited violence in the name of political opportunism. Cruz said that such allegations were ‘ludicrous.’”

Said Brown: “If they do not resign, the Senate must expel them.”

Sen. Marco Rubio (R-FL) said Friday in a video that the people who stormed the U.S. Capitol were “lied to by politicians who were telling them that the vice president had the power to change the election results,” the Miami Herald reports.

“But in the days before the attack that appalled the world and resulted in five deaths, Rubio made no public effort to counter what he now calls a lie pushed by politicians he didn’t name. Nor would he talk when asked this week about a last-ditch attempt by his fellow Senate Republicans to overturn the election by blocking President-elect Joe Biden’s formal certification, though he later voted against it.”

“And he said nothing when, hours before the riot, President Trump tweeted as riled-up caravans of his supporters headed to Washington that ‘if Vice President Mike Pence comes through for us, we will win the presidency.’”

Josh Kraushaar: “House Minority Leader Kevin McCarthy hasn’t joined his fellow Republican leaders in condemning the president. Even after Trump fomented terror against the very legislative body McCarthy represents, more than half of House Republicans voted to perpetuate the president’s dangerous charade. There was no attempt to unite the caucus by belatedly rejecting Trump’s insidious election denialism. Instead, McCarthy continues to bet on Trump’s continued dominance of the Republican party.”