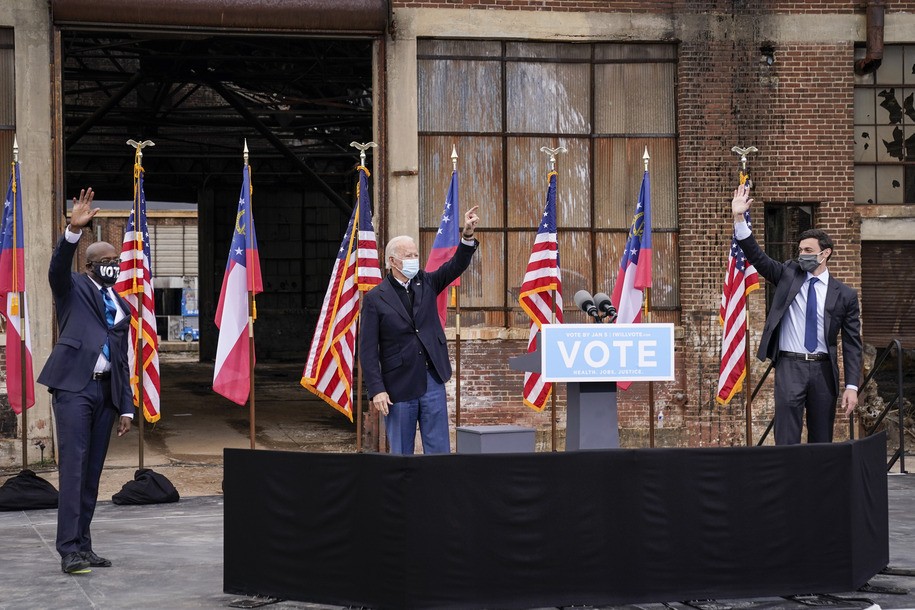 Politico: “Three sources close to Pence said he would likely make an appearance at the Jan. 20 event in a show of support for the peaceful transition of power. The decision to attend, they said, became easier after President Trump publicly criticized Pence leading up to, and following, his refusal to stop the certification.”  Said one person close to Pence: “It was a much more difficult decision days ago, but less difficult now.”

A new YouGov poll found that 45% of Republican voters approved of the storming of the U.S. Capitol, while 43% opposed it. Just 27% of Republicans think this action should be considered a threat to democracy, with 68% saying otherwise.

In the House, however, Republicans are deeply split. Here’s how the new Punchbowl outfit sees it: “The GOP leadership refuses to condemn Trump. Rank and file members are also divided: there’s a faction of lawmakers that remain overwhelmingly loyal to the president. Another group is looking to get back to the business of legislating. The big-dollar GOP donor base is eager to end the ugliness of the Trump era. But the leadership is worried that Trump-aligned forces will build a massive war chest to launch primary challenges against those who speak out against the president.”

In politics, the side that’s more divided usually loses. So if Biden can craft bipartisan legislation that can pass the Senate — perhaps a new coronavirus relief measure or an infrastructure bill — he could further split the GOP internally by driving a wedge between House and Senate Republicans.

State Senate Majority Leader Mike Shirkey was unenthusiastic, saying, “I have no interest and no plans for running for governor in 2022 or beyond.” That may not be quite a no, though, because when Shirkey was asked if he meant he was ruling out a bid, he responded, “I think my statement was pretty darn clear.”

CALIFORNIA US SENATOR AND SECRETARY OF STATE–California Gov. Gavin Newsom announced shortly before Christmas that he would appoint Secretary of State Alex Padilla to succeed Vice President-elect Kamala Harris in the Senate, a move that will make Padilla the state’s first Latino senator. In turn, Newsom said he would elevate Assemblywoman Shirley Weber to Padilla’s post, which would make her the first Black person to serve as secretary of state. All are Democrats.

FLORIDA US SENATOR AND GOVERNOR— Democratic Rep. Val Demings, who’s been mentioned as a potential 2022 candidate for Senate and governor, recently told the Tampa Bay Times that she’s considering her options. The paper also writes that both Agriculture Commissioner Nikki Fried, the only Democrat who holds statewide office in Florida, and 2018 gubernatorial candidate Philip Levine are “laying the groundwork” for a bid against GOP Gov. Ron DeSantis, though neither appears to have said anything publicly yet.

A spokesperson for Fried’s political action committee confirmed to Politico that the commissioner is indeed considering making the race. Fried was elected to her current post 50.04-49.6, a result that made her the only Democrat to win statewide in any of the four election cycles from 2014 through 2020.

NEW MEXICO 1ST CD–State Rep. Georgene Louis announced Monday that she would seek the Democratic nomination to succeed Democratic Rep. Deb Haaland if she’s confirmed as interior secretary. She joins a trio of other Democrats, who announced over the holidays that they’d run to succeed Haaland: state Sen. Antoinette Sedillo Lopez, who took third in the 2018 primary; state Rep. Melanie Stansbury; and trial attorney Randi McGinn. State Auditor Brian Colon also said that he was considering seeking the Democratic nod, while Secretary of State Maggie Toulouse Oliver announced that she’d stay out of the race, as did state Rep. Javier Martínez. Milan Simonich of the Santa Fe New Mexican also mentions state Attorney General Hector Balderas as a possible Democratic contender, but there’s no word if he’s interested.

On the Republican side, conservative radio host Eddy Aragon, who unsuccessfully tried to unseat Steve Pearce late last year as party chair, also says he plans to run if there’s a vacancy. Both the Democratic and Republican nominees in a special election will be chosen by party leaders, not by voters in a primary. Joe Biden carried this Albuquerque-based seat 60-37 last year.

GEORGIA SENATE RUNOFFS–Ossoff and Warnock will not be sworn in to the 117th Congress until after the results of their elections are certified, a task that Republican Secretary of State Brad Raffensperger has until Jan. 22 to complete. It’s therefore likely that New York Sen. Chuck Schumer won’t be elevated to the position of majority leader until a few days after Biden and Harris are inaugurated on Jan. 20.

In Virginia House District 90, Democrat  Angelia Williams Graves defeated Republican Sylvia Bryant 64-36 to hold this seat for her party. This seat, located outside of Norfolk, became vacant when former Rep. Joseph Lindsey became a judge on Norfolk’s General District Court. Graves’ performance was mostly in line with Clinton’s 64-31 win here in 2016. As a result of these two races, this chamber returns to its 55-45 Democratic majority with no other seats vacant.

GEORGIA REPUBLICAN VOTER SUPPRESSION–“Voting was never easier in Georgia than in November’s presidential election. But it might not last,” the Atlanta Journal Constitution reports.

“They blame absentee ballots, used by 1.3 million Georgians who voted from home during the coronavirus pandemic. In all, 5 million people voted in the general election.”

LOUISIANA 5TH CD SPECIAL ELECTION–A special election will take place on March 20 to succeed Republican Rep.-elect Luke Letlow, who died from complications of COVID-19 shortly before the new year, in this very red northeast Louisiana district, and potential candidates have only until Jan. 22 to decide if they’ll run. All the contenders will run on one ballot in a jungle primary, and if no one takes a majority of the vote, an April 24 runoff would take place between the top-two vote-getters, regardless of party.

A number of Republicans are waiting to see if former Rep. Ralph Abraham, whose term ended on Sunday, will run again. Abraham, who decided not to seek a fourth term in 2020, said Monday that it was unlikely he’d try to reclaim the seat, though Hilburn writes that the Republican didn’t rule out the idea altogether.

Another possible candidate is Letlow’s widow, University of Louisiana Monroe official Julia Letlow. A family spokesperson said, “Julia is currently spending time with family and will take time in the coming days to reflect, pray and come to a decision on running for her husband’s congressional seat.”

Republicans who have “all said they will either run or consider running if Abraham doesn’t,” though he notes that most of them hadn’t heard about Julia Letlow’s potential campaign when they were asked, include state Sen. Stewart Cathey; state Reps. Michael Echols and Chris Turner; and Ouachita Parish Police Juror Scotty Robinson, who took fifth place with 8% of the vote in the November all-party primary.

State Rep. Lance Harris, who lost the December runoff to Letlow 62-38, recently said that it would be “inappropriate” to talk about his plans so soon after the congressman-elect’s death, though he “expressed similar sentiments last week” regarding Abraham’s plans as the other potential candidates.

On the Democratic side, Candy Christophe, whom Harris edged out 17-16 for second place in November, has already announced she’s in. Martin Lemelle, who earned fourth place with 10%, is also thinking about another try.