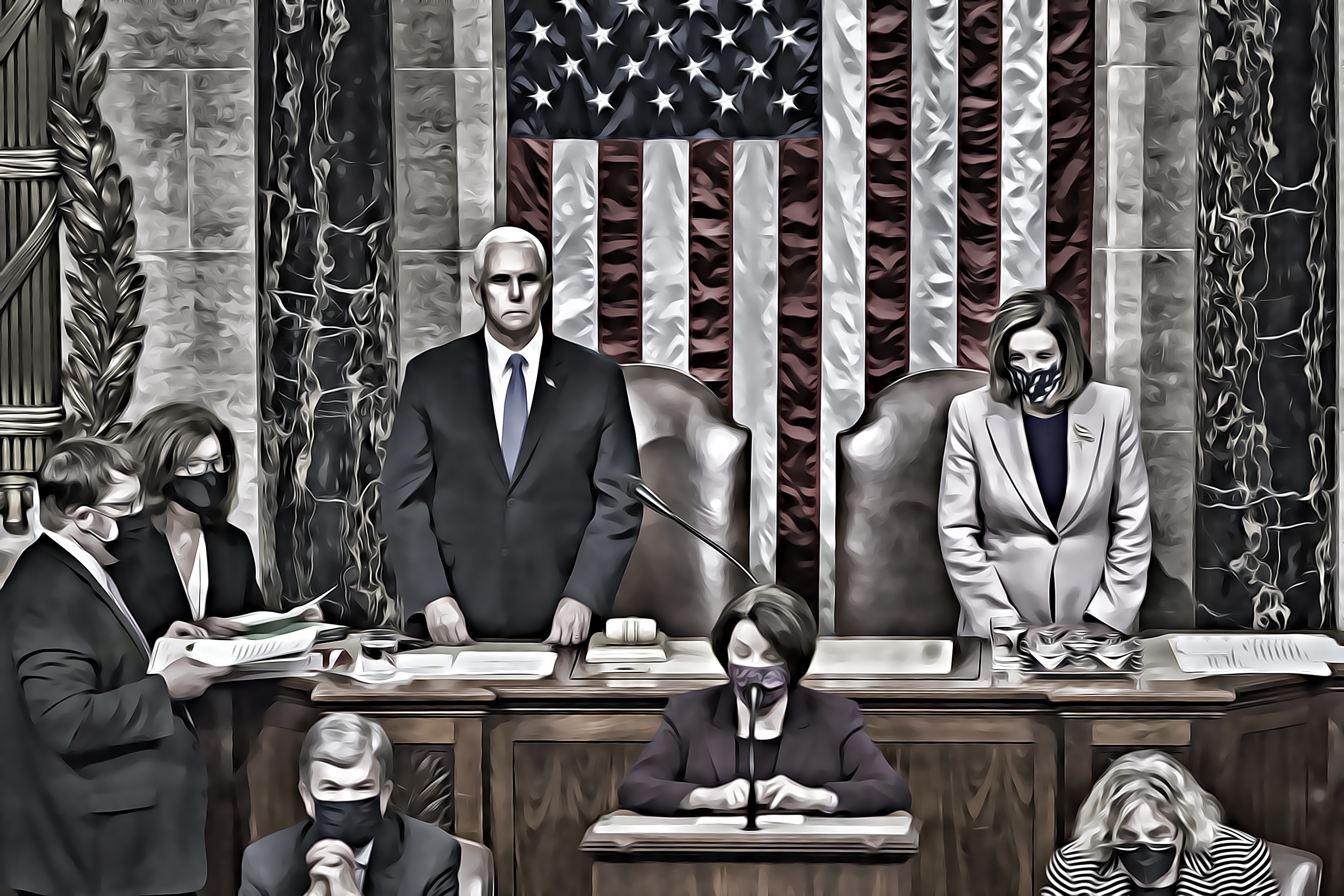 “Congress certified the election of Joe Biden early Thursday, hours after a mob of loyalists urged on by President Trump stormed and occupied the Capitol, disrupting the final electoral count in a shocking display of violence that shook the core of American democracy,” the New York Times reports.

“Mr. Trump, who spent months stoking the anger of his supporters with false claims that the election was stolen and refused to condemn the violent protests on Wednesday, said early Thursday that there would be an orderly presidential transition this month.”

Said Trump: “Even though I totally disagree with the outcome of the election, and the facts bear me out, nevertheless there will be an orderly transition on January 20th.”

“I’ve known Mike Pence forever. I’ve never seen Pence as angry as he was today. I had a long conversation with him. He said, ‘After all the things I’ve done for Trump.’” — Sen. James Inhofe (R-OK), quoted by Tulsa World, after President Trump directed his disdain toward Pence for refusing to interfere in the electoral vote count.

“With new votes joining the tally, we are on a strong path. But even while we wait for more, let’s celebrate the extraordinary organizers, volunteers, canvassers & tireless groups that haven’t stopped going since Nov. Across our state, we roared. A few miles to go… but well done!” — Stacey Abrams, on Twitter, savoring what the New York Times called a 10-year project to turn Georgia blue.

About three-quarters of voters who backed Republican candidates in Georgia’s Senate runoffs say President-elect Joe Biden was not legitimately elected in November, according to AP VoteCast.

Rep. Matt Gaetz (R-FL) was booed on the House floor on Wednesday night when he said “some of the people who breached the Capitol today were not Trump supporters — they were masquerading as Trump supporters,” CBS News reports.

Aaron Blake: “When President Trump lost in November, he joined some select and unpleasant company: Presidents who failed to win a second term. Modern presidents most often win reelection, including all three of Trump’s immediate predecessors. Trump became just the 10th elected president to run a second time and lose.”

“And Tuesday’s results in Georgia are now in line to put him among an even-more select group: Presidents who not only lost the reelection, but also lost both chambers of Congress… Trump would become the first elected president since the Great Depression to lose all three in a single term, and he would join just five other presidents in doing so.”

“The nature of reporters and commenters on cable news and social media is to overreact to whatever most recent development is playing out on their screen. In this case, we may be under-reacting.”

Politico: “The entire episode [challenging the electoral college vote] may make a powerful argument for abandoning the institution that makes Republicans competitive in presidential elections in the first place — the Electoral College.”

“Given the stakes, inadvertently delegitimizing the Electoral College would seem counterintuitive. To some Republicans, it’s nuts.”

President Trump is already baselessly claiming fraud in Georgia’s Senate runoffs: “They just happened to find 50,000 ballots late last night. The USA is embarrassed by fools. Our Election Process is worse than that of third world countries!”

“President Trump’s allies are hoping Wednesday marks his last stand in a weekslong effort to challenge the November election results, with multiple people close to Trump privately acknowledging that his options will be exhausted once Congress tabulates the Electoral College votes,” NBC News reports.

“Yet people close to Trump also say he still may not relent after this final step in the election process, given that his determination to overturn the results has only intensified despite its having failed multiple times — including state certifications and the Electoral College meeting last month — and scores of legal defeats.”

Said one of Trump’s allies: “It’s going to get worse before it gets better. He’s lost re-election. So for somebody who has no sense of shame, there’s no downside to him letting all the crazy out.”

Said Schumer: “It feels like a brand new day. For the first time in six years, Democrats will operate a majority in the United States Senate — and that will be very good for the American people.”

He added: “For too long, much-needed help has been stalled or diluted by a Republican-led Senate and President Trump. That will change with a Democratic Senate, Democratic House, and a Democratic President.”

Jonathan Swan: “He told advisers he didn’t think he needed to go back. Both candidates, Sens. Kelly Loeffler and David Perdue, put in a huge behind-the-scenes effort to get him to go back. He plugged them during his Monday rally, but also ranted about the state’s Republican officials and election machinery.”

“Trump was fixated on his own grievances and on increasingly untethered scenarios for how he might overturn the election.”

“It took great effort to get him to focus on any other subject or to convince him that anything beyond his own election factored into his self-interest.”

“The couple has gone to the inaugurations of Bush’s successors, Barack Obama and Donald Trump. It remains unclear whether Trump, who continues to insist, without evidence, that widespread fraud denied him re-election, will appear at the event on Jan. 20.”

James Hohmann: “Black voters delivered for Joe Biden. By rallying behind him in South Carolina’s February primary, they catapulted the former vice president to the Democratic nomination. By turning out in huge numbers from Philadelphia to Detroit and Milwaukee in November, they ensured he won the electoral college.”

“By defying expectations in Georgia on Tuesday, and turning out at higher rates than their White counterparts, it appears more likely than not that they have just provided Democrats with control of the Senate for the first time in six years and, with it, the ability for the president-elect to enact key elements of his agenda and confirm his nominees.”

0 comments on “The Political Report – Biden’s Victory is Confirmed”