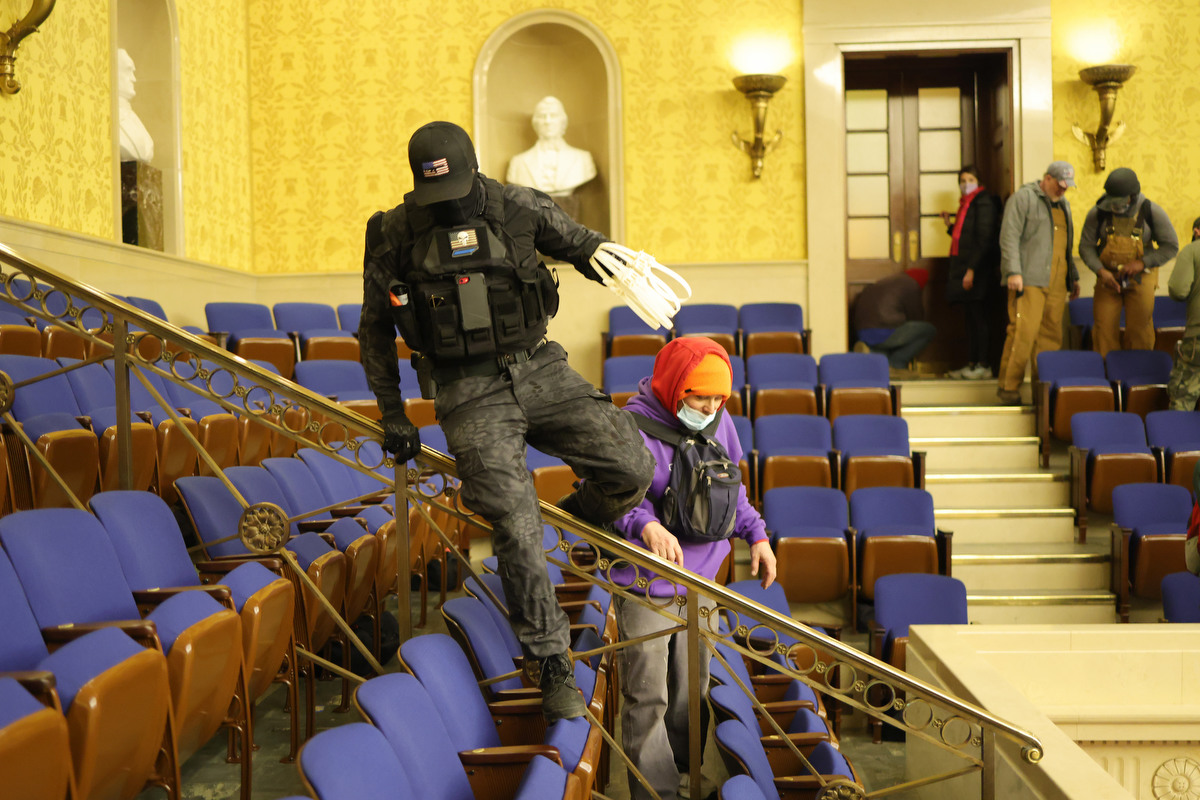 Photo Credit: Getty Images. A Trump Terrorist carries zip ties that were going to be used to capture Congressmen and transport them outside for execution.

This is a guest post by a reader named Trent.

There has been a lot of finger-pointing already today. It was Trump, it was the Klan, it was Howley, it was Mitch. Sure, yeah, they all had a part. Some more than others. But frankly, that is only part of the story. It was all of us. It was our society. It was the path that we have been going down for far too long.

We have been vilifying each other for decades now. Republicans, Democrats, Independents, on and on with every other political identity. We have been calling each other the boogie man/woman for so long now that we all believe that entire hordes of people are villains at their core. They are vile, reptilian, monsters hiding in plain sight. They want to murder babies, they want to kill poor people. They want to allow communists to take over, they want to kill social security and insurance.

The media, on both sides, but certainly some outlets more than others, have helped manufacture this reality and fed off the ratings it has created. At the same time, money in politics has propped up interests that have been hiding behind this simple messaging that plays well on said outlets.

It has become so easy, so expected, that we will respond to this hot button or that hot button rhetoric that politicians have been able to use to hide motives or the harsh reality of politics. Not because everything that is hidden is necessarily purely evil, but because it is easier to rile up people on bumper sticker slogans than it is to explain the hard truth of the matter.

That truth is this: Politics is hard. Really hard. To get ten people in a room that have divergent life experiences, personalities, religious beliefs, and viewpoints to agree on anything of real substance is incredibly difficult. Amplify that by hundreds and you have one day discussing one topic in any political chamber. Add to that the complex realities that exist in policy and the reality that the vast number of any politician’s constituency will be screaming at them and voting against them no matter what they do, and yeah. Politics is hard.

So what have we done. Rather than trying to really dig in and explain and understand the difficulty of governing, we have tried to make it easy. Politicians, politicos, pundits, and on and on have found the emotional, hot bottom rhetoric and clung to it and thrown it around the room ad nauseam. Then those same people have vilified anyone who doesn’t agree with our side, while those in the media have boldface lied to the public over and over and over again to sell the easy version of this warped reality.

In response, the public has either a) gotten so used to being thrown around in a blatant room full of biased talking heads that they have just given up; b) believed the simplified or falsely created reality meant to boost ratings and curry favor, and now will likely never actually come back to actual reality and accept that there are very few real-life boogie men/women, just a room full of imperfect people stuck in a tireless system; or c) given up on trying to decide who is telling the truth to the point that they will listen to and seek out any version of reality that just projects what they already believe.

This downward spiral, like many others, is a harsh thing to be sucked into. It is like a hole so deep that, by the time you realize that you are in it, it’s too late to pull yourself out. Because it seemed as though it has always been dark, lonely, isolated, and confusing, you didn’t necessarily notice the slow descent further into madness as the hole grew deeper beneath you. Before long, the only way you can get out is if someone were to reach down and help pull you out.

What has this all led to? Events like yesterday. My fear is that we will never get back to a point where we admit that politics is hard, it is messy, and where we get back to a point where we actually realize that there are many pieces in the game that all serve their purpose and respect each other for being a part of it. My realization is that I am just as guilty in this as any one of the people I’ve mentioned above. My hope though is that I am entirely wrong about all of this and that we will return to some sense of decency and be able to debate the issues and help the people.

2 comments on “Reflections from Yesterday”