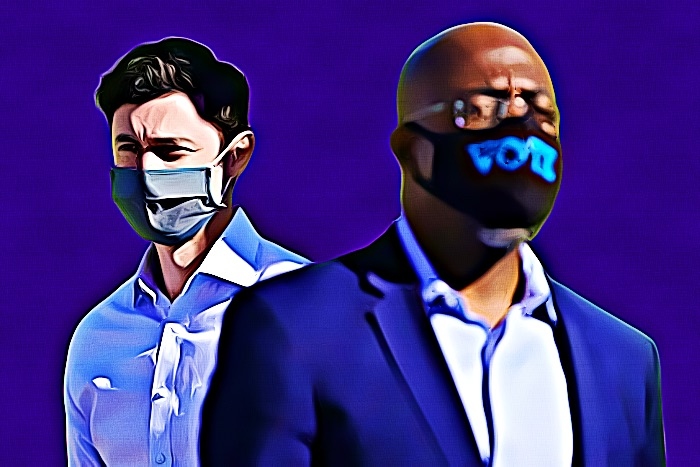 Playbook: “Loeffler’s reputation has been burned. Appointed to her office to help the GOP compete in the suburbs, she failed in her first election. Yet today, she’ll take the anti-democratic step of voting against Biden’s Electoral College win, sealed with millions of lawfully cast ballots in Georgia and across the nation. Loeffler’s money helped finance a brutal campaign against Warnock that provoked Black voters, including the players on the WNBA team she owns.”

“Perdue’s troubles are a testament to the perils of embracing Trumpism. A one-time free-trading establishment Republican, he received 88,000 more votes than Ossoff on Nov. 3, forced into a runoff because he failed to break 50%. He then felt the need to tie himself to Trump even tighter, although Biden had defeated the president in Georgia. As he ran harder right, he ceded the center to Ossoff.”

“While Perdue donned regular-guy denim and Loeffler began dressing as if she drove an 18-wheeler, Democrats made sure to highlight just how rich the two senators were. They were savaged for privately trading stocks after receiving briefings on coronavirus, the threat of which they publicly downplayed.”

Axios: “Top Republicans blame Trump for sabotaging what should have been two easy wins — turning off suburban voters with his chaos and craziness, and sowing distrust of the Peach State election machinery with base voters.”

“Suburbs, my friends, the suburbs. I feel like a one trick pony but here we are again. We went from talking about jobs and the economy to QAnon election conspiracies in 4 short years and — as it turns out — they were listening!” — Josh Holmes, former top aide to Sen. Mitch McConnell (R-KY), on Twitter.

Associated Press: “Warnock, senior pastor of the church where Martin Luther King preached through the height of the Civil Rights movement until his assassination, made history with a surge in Black turnout.”

“To be sure, a narrow win out of 4.4 million votes involves plenty of variables. But Black voters were a force in the early vote and on Election Day. Notably, it wasn’t just in metro Atlanta, but also in rural and small-town counties across South Georgia, where Black turnout has historically lagged.”

“That means it was an alliance spanning from the most affluent Black residents of Atlanta, including recent transplants to Georgia, to those Black Georgia natives who hail from the most economically depressed pockets of the state.”

Georgia Secretary of State Brad Raffensperger (R) told WATL that he considered his phone call with President Trump to be a “private conversation” and would not have shared details of it if the president had not sent a false tweet about it.

Raffensperger was asked by Sandra Smith on Fox News whether he’s worried “about the precedent” set by releasing the recording of his call with President Trump over the weekend:

SMITH: Why put into jeopardy our country by leaking a phone call of that nature?

RAFFENSPERGER: I don’t understand how truth would ever jeopardize the country.

Lou Dobbs on his Fox Business show:  “We’re eight weeks from the election, and we still don’t have verifiable, tangible support for the crimes that everyone knows were committed — that is, defrauding other citizens who voted with fraudulent votes. We know that’s the case in Nevada, we know it’s the case in Pennsylvania and a number of other states, but we have had a devil of a time finding actual proof. Why?”

Now, stay with me, Lou, but the answer is simple: there is none. No evidence of fraud because there was no fraud. You lost.

“The new session of the Pennsylvania Senate got off to a chaotic start Tuesday, with Republicans refusing to seat a Democratic senator whose election victory has been certified by state officials,” the Philadelphia Inquirer reports.

“Amid high emotions and partisan fingerpointing, Republicans also took the rare step of removing the Democratic lieutenant governor, John Fetterman, from presiding over the session. They apparently did so because they did not believe Fetterman was following the rules and recognizing their legislative motions.”

The Markup monitored what happened when Facebook reversed its political ad ban ahead of the Georgia Senate runoffs.

“While Facebook’s controls were in place, we found that links to traditional news sites were present in almost all election-related posts that appeared on our Georgia panelists’ feeds. After Dec. 16, however, when Facebook flipped the switch to turn on political advertising for the Georgia election, we noticed that partisan content quickly elbowed out news sites, replacing a significant proportion of mentions of the election in our users’ feeds.”

Dan Balz: “There are but [14] days left in President Trump’s term, but there is no doubt that he will use all of his remaining time in office to inflict as much damage as he can on democracy — with members of a now-divided Republican Party acting as enablers.”

“Trump will never let this go, not between now and the day he is forced to give up the office and Biden is sworn in, not in the days and weeks and months after that. That he is on a mission is evident, but to what end, other than to avoid the ignominious label of ‘loser’ after a single term in the White House? That, at least, is consistent with the behavior he has exhibited throughout the four years of his presidency. He cares nothing about collateral damage to democracy.”

“The president, however, is not on this mission alone. Instead, he continues to gather support from members of a party he has remade in his own image.”

“President Trump’s relentless effort to overturn the result of the election that he lost has become the most serious stress test of American democracy in generations, led not by outside revolutionaries intent on bringing down the system but by the very leader charged with defending it,” the New York Times reports.

“In the 220 years since a defeated John Adams turned over the White House to his rival, firmly establishing the peaceful transfer of power as a bedrock principle, no sitting president who lost an election has tried to hang onto power by rejecting the Electoral College and subverting the will of the voters — until now. It is a scenario at once utterly unthinkable and yet feared since the beginning of Mr. Trump’s tenure.”

“That he is almost certain to fail does not mitigate the damage he is doing to democracy by undermining public faith in the electoral system.”

Olivia Nuzzi has an excellent piece on covering the White House during the Trump era:

“Under ordinary circumstances, a press corps is a team of rivals; however, the chaos of the Trump era, and the president’s predictably unpredictable nature, leveled the playing field for the wider cohort in many ways. The process was essentially more democratic than ever before, since leaks came from everywhere and came to anyone skilled or lucky enough to find them, their status in the news hierarchy often secondary to their ability to actually understand how the place operated.”

“As familiar as we all are with Trump’s contempt for the media, only a select few have shared the experience of being in the room or in the Air Force One cabin or of shouting over the helicopter in the Rose Garden to see the circus up close. It creates a bond.”

“President-elect Joe Biden and his transition team have begun to fill out top positions on the incoming National Security Council and at the State Department, with key roles like deputy national security adviser and Deputy Secretary of State going to veterans of the Obama administration,” Politico reports.

Reps. Ted Lieu (D-CA) and Kathleen Rice (D-NY) called on FBI Director Christopher Wray to open a criminal probe into President Trump after the release of a recording of his Saturday call demanding Georgia Secretary of State Brad Raffensperger (R) “find” additional votes for him, The Hill reports.

The answer is no, they are anti Republican.

Rick Hasen: “As with so many things in this presidency and president, the question is whether Trump is drinking his own Kool-Aid. Reading the entire one-hour rambling call transcript, it is hard to know if Trump actually believes the fever swamp of debunked conspiracy theories about the election or whether he’s just using the false claims as a cover to get the political results he wants…”

“Trump is the rare potential criminal defendant to have plausible deniability about whether he accepts truths as clear as gravity, making any prosecution difficult. Add onto that concerns of prosecutorial discretion for both the new Biden administration and Georgia officials, possible claims of legal immunity, a presidential self-pardon that could relieve Trump of liability under federal law, and other political hurdles, and a prosecution of Trump is unlikely.”

“Despite the long odds, I would hope at least Georgia prosecutors will consider going after Trump, or that the House of Representatives might impeach him again with the goal of disqualifying from running in 2024. Lack of prosecution or investigation demonstrates that there’s little to deter the next would-be authoritarian—perhaps a more competent one—from trying to steal an election. Trump came a lot closer than he should have this time, and next time we may not be so lucky.”

Jonathan Rauch: “Above all, the Republicans’ challenge is part of an information-warfare campaign. They are using a classic propaganda tactic that might be called ‘conspiracy bootstrapping.’ First, you introduce a false idea, spreading it by every available means. Then, once people are talking about it, and some believe it, you cite its prevalence as evidence that it might be true—an epistemic sleight-of-hand by which propaganda validates itself.”

0 comments on “The Political Report – Dems win the Georgia Runoffs and the Senate!!”