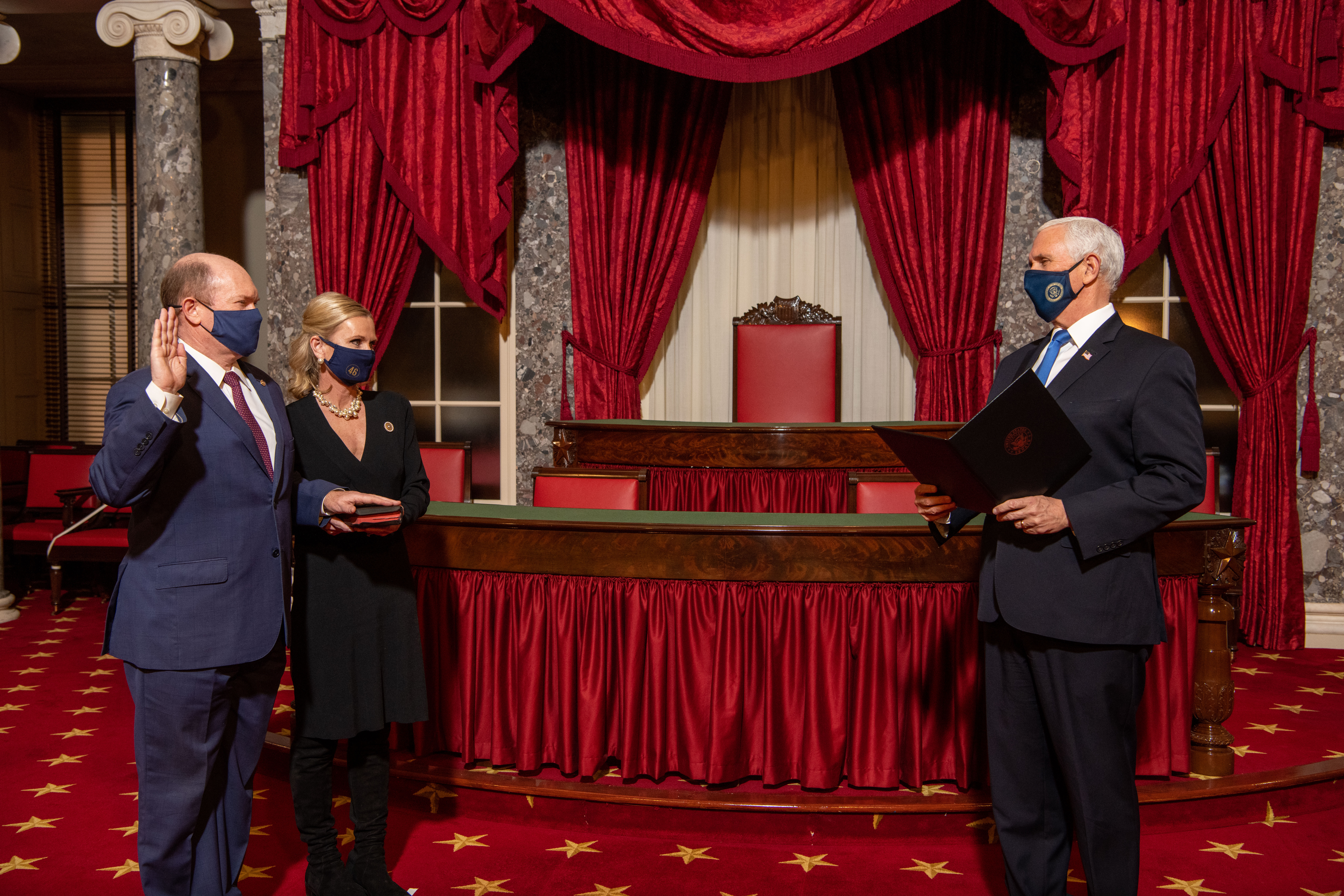 “Pence just left the Hill after a two-hour meeting in his office that included an appearance by the Senate parliamentarian… Trump’s been vocal privately that he expects the VP to play a role in the GOP disruption when Congress meets to certify Biden’s win.”

All ten living secretaries of defense — including Dick Cheney, James Mattis, Mark Esper, and Donald Rumsfield — signed an open letter about the military and the peaceful transfer of power:

“As senior Defense Department leaders have noted, ‘there’s no role for the U.S. military in determining the outcome of a U.S. election.’ Efforts to involve the U.S. armed forces in resolving election disputes would take us into dangerous, unlawful and unconstitutional territory. Civilian and military officials who direct or carry out such measures would be accountable, including potentially facing criminal penalties, for the grave consequences of their actions on our republic.”

David Frum: “That letter from 10 former SecDefs warning against Trump using the military to hold onto power causes me to wonder: Has Trump been making calls to US generals like that he made to Georgia secretary of state, demanding or threatening they help him overturn the 2020 election?”

Almost 200 of the country’s top business leaders urged Congress to certify the electoral results for President-elect Joe Biden in a letter Monday, arguing that “attempts to thwart or delay this process run counter to the essential tenets of our democracy,” the Washington Post reports.

David Graham: “The moral hazard of the Republican stance on the Ukraine plot was clear. If Trump got away with extorting Ukraine and trying to rig the election process in his favor, he’d take the lesson that he could continue his brazen interference in elections without consequence. The only remaining check on him would be the voters—and he was looking for ways to juke them, too.”

“Reaching this conclusion didn’t require clairvoyance, because Trump was open about it even amid impeachment. As he stood accused of privately pressuring Ukraine to investigate Hunter Biden, he publicly asked China to do so. He continued his pressure play on Ukraine, too, though it never came to anything.”

“Trump quickly proved me right. He began pushing out officials who had testified in the impeachment inquiry. In May, he tried to extort election-procedure changes from Democratic-led states. The post-election moves, and especially the coup call, are the most brazen and direct echo of the Ukraine plot, and they show why acquittal was so dangerous to the republic.”

A Milwaukee-based law firm is distancing itself from one of the attorneys involved in President Trump’s disturbing call trying to overturn the results of the Georgia election, the Milwaukee Journal Sentinel reports.

Dominion Voting Systems plans to sue attorney Sidney Powell “imminently” for defamation, and is continuing to explore similar suits against President Trump and others, Axios reports.

She added: “I think everybody ought to listen to the full hour of it.”

Cheney sent out a lengthy memo to GOP lawmakers urging them not to take part in the challenge of the Electoral College vote.

House Minority Leader Kevin McCarthy “has quietly blessed an effort by conservative lawmakers to overturn President-elect Joe Biden’s victory when a joint session of Congress meets later this week, even as other top congressional Republicans are raising alarms that the push could cause lasting damage to a pillar of democracy,” CNN reports.

Politico: “An intra-party battle is heating up within the Republican Party as two bitterly divided sides clash over the decision of at least 12 GOP senators, and dozens more House Republicans, to challenge the certification of Joe Biden’s 2020 presidential election win.”

“The effort is snowballing as more Republicans join the Trump-guard led by Sens. Ted Cruz and Josh Hawley in the Senate and Rep. Mo Brooks in the House, while the old guard like Senate Majority Mitch McConnell, Sen. Pat Toomey and Mitt Romney is warning that this effort is jeopardizing the nation’s democratic values.”

“With nearly a quarter of Senate Republicans taking part in the effort, against the urging of top GOP Senate leaders, it is also becoming clear just how much of a force Trump will be in the Republican Party even once he’s out of the White House.”

“The tensions have jumped so high that individual GOP senators are now directly headbutting one another, with Toomey accusing Cruz, Hawley and other Republicans of undermining the right to participate in direct elections and Hawley decrying Toomey’s arguments and ‘shameless personal attacks.’”

Politico: “It’s the worst-kept secret in Georgia that Abrams is gearing up for a rematch against Kemp in 2022… The Senate runoffs are shaping up as the first salvo in a Kemp-Abrams rematch — a test of whether Abrams’ yearslong mobilization efforts can solidify Georgia’s status as a purple or even blue state, or if Biden’s victory over President Trump was an aberration.”

New York Times: Georgia is getting more blue. The Senate runoffs will tell you how much.

British Prime Minister Boris Johnson announced that England will enter a six-week lockdown, as the spread of a highly contagious new variant threatens to overwhelm the country’s health system, the BBC reports.

Johnson said that the entire country will be placed into full lockdown, with household mixing banned indoors and only essential shops remaining open.

“Washington, D.C.’s police chief said Monday he intends to reach out to Rep. Lauren Boebert (R-CO) about her intention to carry a Glock handgun in the city, which has strict limits on carrying concealed firearms,” Politicoreports.

The Hill: Boebert appears to carry a gun on Capitol Hill in new ad.

Rick Hasen: “If not for Biden’s significant margin of victory over Trump and for the courageous, politically risky actions of many Republican and Democratic election administrators and elected officials, this Republican attack on American democracy might well have been successful, securing an illegitimate second term for Trump.”

“To remove the potential for this sort of gamesmanship in certifying and counting each state’s votes for president, the country needs to adopt a number of measures in the next few years to eliminate the power of individuals to interfere with election results.”

Gerald Seib sees this plausible scenario in two years:  “A Republican senator or House member, one party leaders are eager to see retain his or her seat, will be challenged in a primary by a disciple of President Trump. The incumbent, after being attacked as a member of a disparaged party establishment, will still win the primary. But that outcome will be challenged by Republican rebels, who, taking a cue from what is happening right now, will charge that the election was ‘rigged’ by the establishment, and go to court to try to overturn it.”

“Such are the forces being unleashed this week within the GOP, where the prospect of a virtual civil war suddenly feels real.”

The U.S. attorney in Atlanta abruptly departed his post Monday, TPM reports. The reason for U.S. Attorney Byung ‘BJay’ Pak’s change of plans are not clear. Pak cited only “unforeseen circumstances” as the reason he was leaving Monday rather than Jan. 20.

President Trump on Monday is expected to give Rep. Devin Nunes (R-CA) the Presidential Medal of Freedom, the nation’s highest civilian honor, the Washington Post reports.

Trump — who is using his final days in the White House in part to reward friends and allies with pardons and other decorations — is also expected to give Rep. Jim Jordan (R-OH), another confidant, the same award next week.

“President-elect Joe Biden’s inauguration will include a virtual parade as part of a series of events on Jan. 20 that have been scaled-down because of the coronavirus pandemic,” the Wall Street Journal reports.

“After being sworn in on the west side of the Capitol, Mr. Biden, Vice President-elect Kamala Harris and their spouses will participate in Pass in Review, a military tradition that reflects the peaceful transfer of power and will include every branch of the military… Mr. Biden is expected to review the readiness of the troops and will then be escorted from 15th Street to the White House by members of the military.”

Wall Street Journal: “If an individual gives $500,000 or bundles $1 million for the inauguration, the person would be invited to virtual events with Mr. Biden and Ms. Harris and their spouses…”

“The person also would be granted ‘preferred viewing’ for the virtual inauguration, included in a virtual concert during inauguration week, invited to virtual briefings with Biden leadership, and given VIP tickets to a future in-person event.”