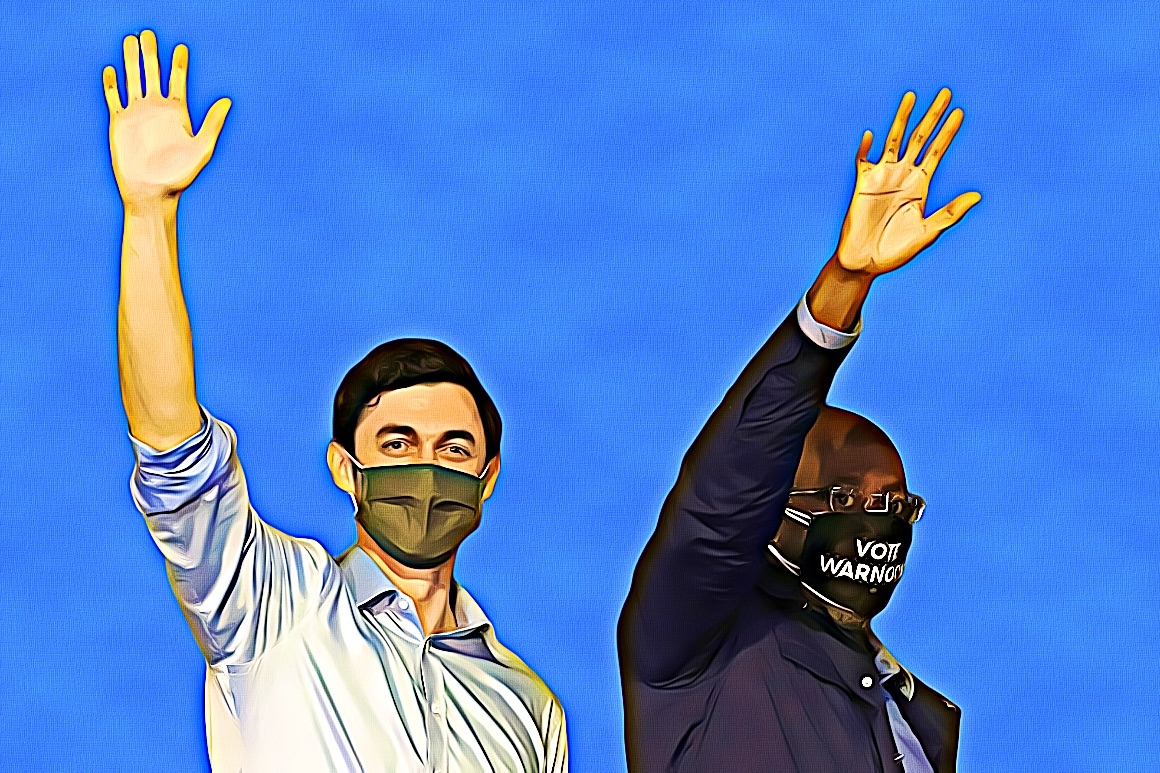 Cook Political Report: “Private polling from both parties, in addition to scant public polling, puts both races as a coin toss within the margin of error. It’s impossible to know how much the president’s latest temper tantrum will impact the Election Day turnout Republicans badly need. Still, GOP sources in the state certainly don’t think it will help. Early voting topped 3 million votes — already making this the highest turnout Georgia runoff ever. Democrats are encouraged by that strong turnout, which shows the numbers outpacing even Election Day totals in key demographics, particularly among Black voters and younger voters…”

“The total early vote was 23 percent lower than the same period in the general election, and one GOP source predicts that if the day of vote sees that same drop, it’s not good for them.”

“A record 3 million Georgia voters cast their ballots before early voting ended for the U.S. Senate runoffs, setting up a showdown that will be decided on election day Tuesday,” the Atlanta Journal Constitution reports.

Said Perdue: “I guess I was raised differently. To have a statewide elected official, regardless of party, tape without disclosing a conversation — private conversation — with the president of the United States, and then leaking it to the press is disgusting.”

President Trump’s now-notorious call with Georgia Secretary of State Brad Raffensperger (R) was the 19th time the White House had tried to reach the state official since the election, NBC News reports.

A new poll for a GOP super PAC in Georgia:

“Terry McAuliffe (D) announced Monday that he has raised more than $6 million for his comeback bid for Virginia governor, far surpassing what previous gubernatorial hopefuls have raised at similar points in their campaigns,” the Washington Post reports.

Georgia Secretary of State Brad Raffensperger (R) told ABC News that President Trump could face a criminal investigation over his demand that Georgia top elections official “find” enough votes to throw the state to him.

Said Raffensperger: “I understand that the Fulton County district attorney wants to look at it. Maybe that’s the appropriate venue for it to go.”

“The only Democrat on Georgia’s state election board on Sunday called on Georgia Secretary of State Brad Raffensperger (R) to investigate possible civil and criminal violations committed by President Trump during a phone call over the weekend in which the president pressured Raffensperger to ‘find’ enough votes to overturn his defeat, the Washington Post reports.

Sen. Tom Cotton (R-AR), who is seen as a rising star in the Republican Party and a major ally for President Trump, told Fox News that he will not oppose the counting of certified electoral votes during a joint session of Congress later this week to confirm Joe Biden’s election victory.

And not surprisingly, Trump turned on Cotton, warning him that Republican voters “never forget.”

“For more than four years, President Trump has dominated the Republican Party and the whole of American politics. Now Georgia gets to decide what comes next,” the AP reports.

“Two Senate runoffs on Tuesday, just 15 days before Trump leaves office, will not only determine which party controls the Senate but offer the first clues about how long Trump can maintain his grip on the nation’s politics once he’s out of the White House.”

Axios: “The Republican battle lines being formed in President Trump’s final days — his loyalists vs. Senate Majority Leader Mitch McConnell’s establishment — will shape American politics for the next four years.”

Atlanta Journal Constitution: “Absent from the campaign trail in the final week leading up to Election Day has been Gov. Brian Kemp. Although Kemp campaigned frequently for the senators earlier in the fall, he has been missing from the final Republican push ahead of Tuesday’s runoffs, embroiled instead in a contentious standoff with President Donald Trump following Trump’s inaccurate claims that he won the November election in Georgia.”

Associated Press: “Just like in November, it’s very possible Americans will go to bed without knowing who won. … In a close contest, look for the Republican candidate to jump out to an early lead. That due to two factors: First, Republican areas of the state usually report their results first. Second, Republican voters have been more likely to vote in person, either on Election Day or during the early voting period. Many counties release those in-person results first.”

“Trump’s presidency drove historic turnout and record donations to political campaigns in a country whose voters have often shown a disinterest in politics.”

“Though he is actively campaigning for the state’s two incumbent GOP senators Kelly Loeffler and David Perdue, holding a Monday night rally to drive turnout to help save the Republican majority, Trump is continuing to run roughshod all over the party’s message for Tuesday’s must-win runoffs and, some Republicans worry, giving Democrats a perfect opening.”

The Guardian: Georgia runoffs will help define much of Biden’s first term.

Organizers are anticipating as many as 20,000 people at President Trump’s rally for Sens. Kelly Loeffler and David Perdue on Monday, the eve of the U.S. Senate runoffs, the Atlanta Journal Constitution reports.

In the run-up to November’s election, Trump crisscrossed the nation, holding mass rallies — sometimes in spite of objections from local authorities — and in defiance of guidance from his coronavirus task force.