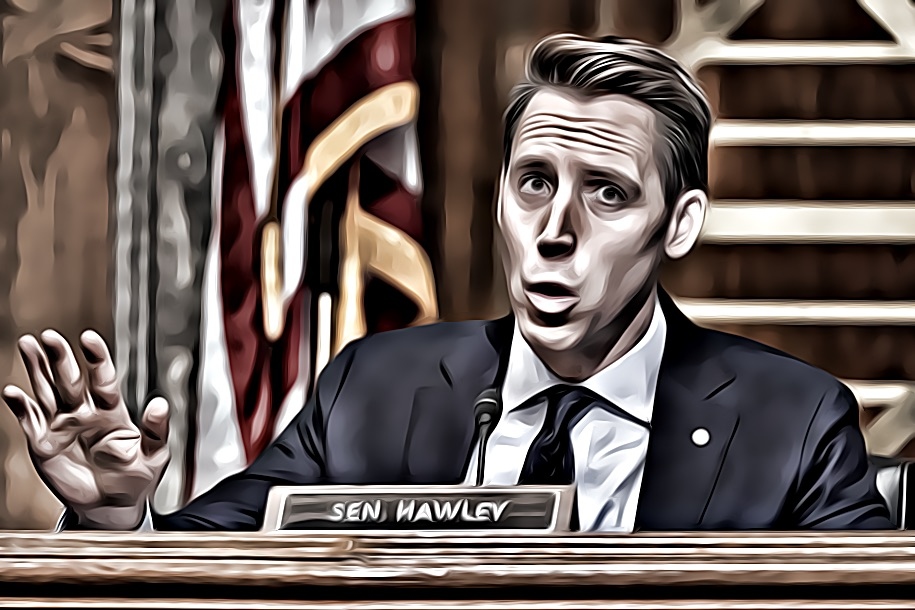 Sen. Josh Hawley (R-MO) said that he will object during Congress’s counting of the Electoral College vote on January 6, becoming the first GOP senator to back the effort by House conservatives, The Hill reports.

The decision by Hawley would ensure a debate and vote in the House and Senate on the Electoral College results.

A new NPR-Ipsos poll finds 40% of Americans believe the coronavirus was made in a lab in China even though there is no evidence for this.

And one-third of Americans believe that voter fraud helped Joe Biden win the 2020 election, despite the fact that courts, election officials and the Justice Department have found no evidence of widespread fraud that could have changed the outcome.

This one is particularly bonkers: The poll asked respondents whether they believe that “a group of Satan-worshipping elites who run a child sex ring are trying to control our politics and media” — the false allegation at the heart of QAnon. While only 17% said it was true, another 37% said they didn’t know.

Atlanta Journal Constitution: “Law enforcement and election investigators didn’t find a single fraudulent absentee ballot during an audit of over 15,000 voter signatures, according to a report by the Georgia secretary of state’s office released Tuesday.”

“Sen. Ted Cruz (R-TX) needs your help to keep the U.S. Senate in Republican hands. So blared a handful of Facebook’s ads that Cruz’s campaign committee purchased this month. But none of them were actually raising money for the Republican candidates in Georgia. Instead, every penny donated went directly to…Cruz,” the Daily Beast reports.

“The Cruz campaign bought 15 separate ads on Facebook over the past two weeks, each featuring a video of the senator dramatically hyping the need to hold two U.S. Senate seats in Georgia runoff contests.”

“President Trump on Wednesday called for Georgia Gov. Brian Kemp to resign, escalating his criticism of a fellow Republican who has refused to intervene in the state’s presidential election or embrace Trump’s baseless claims of widespread fraud,” the Washington Post reports.

The Washington Post reports President-elect Joe Biden and Vice President-elect Kamala Harris “will both travel to Georgia in the closing days before its pair of Senate runoff elections, underscoring the importance of contests that will determine which party controls the chamber next year.”

Politico: “Democrats are buoyed by the strong early vote numbers, which show Black voters making up a larger percentage of the electorate than in November and higher early turnout in Democratic congressional districts in the state. Both are positive signs for Jon Ossoff and Raphael Warnock, the two challengers, easing fears that the typical voter dropoff that has plagued Democrats in past years would doom the party’s chances with control of the Senate on the line.”

“Meanwhile, early-vote turnout has lagged in Republican-held congressional districts, likely leaving GOP Sens. Kelly Loeffler and David Perdue with a larger deficit heading into Election Day than they had to make up on Nov. 3, with early voting concluding this week leading up to the New Year’s holiday.”

Speaker Nancy Pelosi (D-CA) said she will seat Rep.-elect Mariannette Miller-Meeks (R-IA) this weekend as Rita Hart (D) contests the results of their race, The Hill reports.  Results show Hart having been defeated by Miller-Meeks by six votes after a recount.

“President Trump asked the U.S. Supreme Court to reverse Wisconsin’s high court, set aside the state’s presidential election and allow Republicans who control the Legislature to decide how to cast the state’s 10 electoral votes,” the Milwaukee Journal Sentinel reports.

“It’s the latest in a string of dozens of challenges by the Republican president and his allies to overturn the Nov. 3 election he lost to Democrat Joe Biden. Trump and his supporters have failed to make headway in the courts.”

“Lawyers representing Rep. Louie Gohmert (R-TX) and Arizona’s 11 GOP electors disclosed in a court filing Tuesday that Vice President Mike Pence rejected their request to join their attempt to subvert the results of the presidential election,” The Hill reports.

Politico: “The law that guides the proceedings, the Electoral Count Act — passed in 1887 to address the disastrous election of 1876 — is vaguely written and full of gaps that have perplexed constitutional scholars for a century. Now, Trump and his allies are working to exploit those gaps to try to muscle their way to a second term. There’s little doubt that Biden will be certified as president by the end of the day on Jan. 6 or in the wee hours of Jan. 7, but Trump’s allies could cast a cloud over the process — grinding it to a halt, attempting to force votes on alternate slates of Trump-supporting electors and raising untold objections to the proceedings that could disrupt the traditionally ceremonial event.”

“But the lack of clarity also creates enormous opportunities for those who wish to limit or prevent the day-long spectacle that Trump’s allies are promising. That could include both Speaker Nancy Pelosi and Senate Majority Leader Mitch McConnell, who has been working to tamp down GOP support for challenges in recent days — drawing Trump’s fury.”

“That includes proposals to roll back laws in Georgia and Pennsylvania that allowed all registered voters to vote by mail – moves that civil rights and voting advocates say could suppress turnout.”