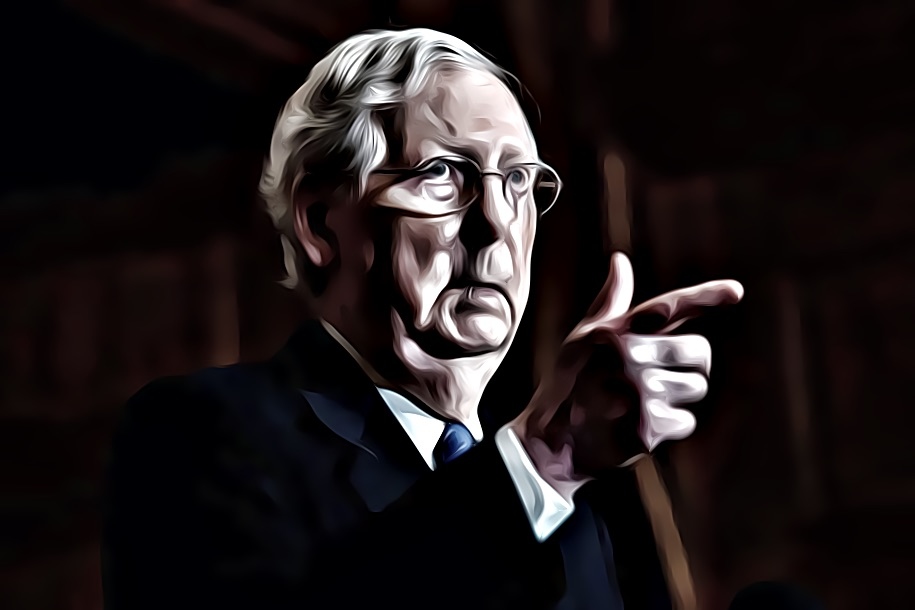 “Senate Majority Leader Mitch McConnell on Tuesday stymied Democrats’ long-shot bid to immediately increase direct stimulus payments to $2,000, leaving the fate of bigger checks in limbo as this Congress comes to a close at the end of the week,” Politico reports.

Bloomberg: “McConnell objected to a motion by Senate Minority Leader Chuck Schumer to approve by unanimous consent a stimulus-checks bill that passed the House on Monday. He also blocked a motion by Senator Bernie Sanders to vote on the stimulus checks immediately after the Senate votes on overriding Trump’s veto of a key defense policy bill.”

“Floor requests to immediately pass legislation are frequently criticized as stunts, but this episode highlights how unlikely it is that the Senate will pass a bill increasing the payments before Congress adjourns Sunday.”

It appears that McConnell will kill the bill by attaching poison pills, namely by setting up a Trump Commission to investigate how the election was stolen by Biden and by repealing Section 230 of the Communications Act. The bill will now not pass the Senate and most definitely won’t pass the House (and in fact, the House is gone, adjourned, session over).

Josh Marshall: “There’s a surreal confluence of events right now with President Trump’s push for $2,000 checks. In his effort to remain relevant, lash out and fuel the fantasy the election is still underway, President Trump glommed on to the Democrats’ proposal for $2,000 relief checks. Now it may end up both making $2,000 checks a reality and upending the Republicans in the Senate runoffs. It could be both, neither, a mix. But he’s now created a situation in which McConnell will really cut Loeffler and Perdue off at the knees if he doesn’t allow this vote to happen. They both say they support it. If McConnell, the guy who’s control of the senate is their election raison d’etre, opposes it where does that leave them? They’re both now endorsing it after consistently opposing it. And the Democrat Ossoff is the one who’s pushed them.”

Said Sullivan: “It kind of comes back to the lack of visibility that we have right now into a number of critical issues relating to military operations because of DoD’s obstruction and roadblocks, and that will mean that we are going to have to take time at the beginning of the administration after Jan. 20 to take a hard look at how we’re postured, and what threats we’re up against, and what continuing the drawdowns look like in the way of risk to force and other considerations.”

“The House of Representatives on Monday voted to override President Trump’s veto of the sweeping defense bill known as the National Defense Authorization Act, delivering a bipartisan rebuke to the President,” CNN reports.

“The bill initially passed both the House and Senate with veto-proof majorities, but amid Trump’s continued opposition, it had been unclear if the override attempt would be successful or if the veto would be sustained.”

President Trump sharply criticized Republican leaders for allowing a vote to override his veto of a must-pass defense policy bill, calling them “weak” and “tired” and accusing them of a “disgraceful act of cowardice,” The Hill reports.

“McConnell and the Senate want to expedite the override vote and I understand that. But I’m not going to allow that to happen unless there is a vote, no matter how long that takes, on the $2,000 direct payment.”

“Graham was far from alone. Republicans across Washington had blanched at Trump’s shocking threat to kill the coronavirus relief package — especially with the Georgia runoffs and the Senate majority hanging in the balance.”

“The crisis at Los Angeles County hospitals hit new levels as patients continued to stream in during the holiday weekend, and the medical system is bracing for a new wave of coronavirus spread arising from Christmas travel and gatherings. L.A. County’s cumulative COVID-19 death toll is expected to climb past 10,000 this week,” the Los Angeles Times reports.

“Hospitals are so inundated that they’ve resorted to placing patients in conference rooms and gift shops. But even so, many facilities are running out of space.”

President-elect Joe Biden once again warned Americans that the worst of the coronavirus pandemic — “maybe the toughest of this entire pandemic” — remained ahead of them, despite vaccinations that are underway, the Washington Post reports.

He said the pace of those vaccinations had fallen far behind what the Trump administration promised: “Turning this around is going to take time. We might not see improvement until well into March.”

“The century-old tradition of the post-inauguration lunch is the latest pandemic casualty as COVID-19 continues to upend the ceremonies around the Jan. 20 swearing-in of President-elect Joe Biden,” Roll Callreports.

“The Inaugural Luncheon tradition, which has been around since the late 1800s, has evolved into a three-course meal and musical performance in the Capitol’s Statuary Hall for the new Cabinet, the Supreme Court and congressional leadership. The hall, however, will be quiet after this January’s scaled-back inauguration, the Joint Congressional Committee on Inaugural Ceremonies announced Tuesday.”

“In addition, the Office of the Attending Physician is offering the vaccine to four staffers of every committee chair and every ranking committee member.”

“[Trump’s] mood darkened [is his mood never not dark?] as soon as he walked into his members-only club Mar-a-Lago, three days before Christmas, according to multiple sources. The changes to his private quarters, many of which were overseen by his wife, first lady Melania Trump, were not to President Trump’s liking, and he was mad about it,” CNN reports.

“Several weeks in the works, the renovations, undertaken to make the approximately 3,000-square-foot space feel larger and updated in preparation for the Trumps post-White House life, didn’t appeal to Trump’s aesthetics, according to his reaction. Trump was also displeased with other renovations at the property, the source said, not just in the living space.”

Dr. Anthony Fauci told CNN that the Trump administration’s Operation Warp Speed will not reach its goal of having 20 million Americans receive the coronavirus vaccine by the end of December.

Axios: “Only 2.1 million people have received the first dose of the vaccine, with nearly 11.5 million doses distributed as of Monday, according to the Centers for Disease Control and Prevention.”

Christian Schneider: “In the course of his young political career, Marco Rubio has been a Tea Partier, a Reformicon, and a neoconservative. Now he’s auditioning for the role of MAGA FAN #7 by trying to paint Anthony Fauci as the real villain of the pandemic. His strategy seems to be: Dazzle the Trumpenproletariat so completely that they adopt him as their new king.”

“It’s adorable. The political equivalent of leaving your husband in hopes of catching the eye of pharma bro Martin Shkreli.”

“On the afternoon of October 21, seven Phoenix police officers gathered for a briefing in a Cave Creek station when the meeting diverged into a discussion about the defund-the-police movement,” the Arizona Republicreports.

When Officer Steven Poulos expressed his thoughts, the room went quiet: “If the mayor defunds the police, I’m going to shoot her.”

The sergeant broke the silence, saying: “You’re not going to shoot the mayor.”

Poulos doubled down: “That’s a promise.”

New York Times: “As an exercise in raw presidential power, it was a flop. As a political tactic, it backfired. And as a coda to his final weeks in office, President Trump’s threat to veto a $900 billion Covid relief and government funding bill merely underscored his tumultuous tenure in the Oval Office.”

U.S. District Judge Robert Pratt told the Associated Press that, “It’s not surprising that a criminal like Trump pardons other criminals.” He added: “Apparently to get a pardon, one has to be either a Republican, a convicted child murderer or a turkey.”