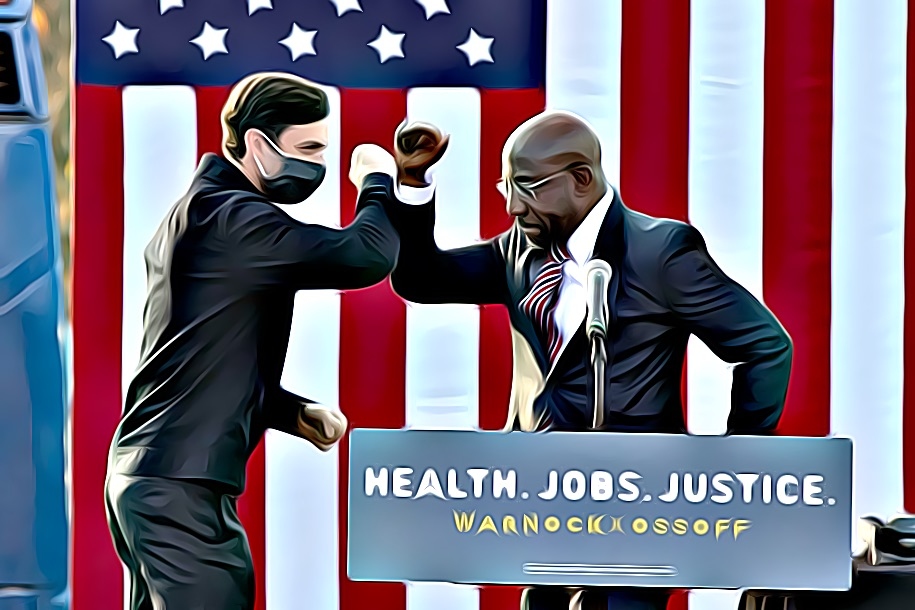 In contrast, nearly two-thirds of Americans approve of the way Joe Biden is handling his presidential transition.

Seven days out from Election Day in Georgia’s crucial senate runoff races, Jon Ossoff (D) and Raphael Warnock (D) are “sounding the alarm” about their ability to keep pace with GOP spending, calling for a “significant increase” in grassroots donations to prevent running out of money, NBC News reports.

NBC News: “More than 2.3 million voters have cast their ballots, with more than 800,000 voting absentee by mail and 1.5 million voting early, in person, according to the Georgia Secretary of State’s office. The previous runoff turnout record was set in 2008, when Georgians cast 2.137 million total ballots in the entire election.”

“More than 78,000 Georgians who did not vote in the general election have already voted in the runoff race.”

Sens. Kelly Loeffler (R-GA) and David Perdue (R-GA) on Tuesday both came out in favor of increasing direct payments in the coronavirus relief package from $600 to $2,000 per person, Axios reports.

However, Republican voters think their party’s lawmakers should stick to their positions, 54% to 25%.

Axios: “It’s another sharp criticism from a newspaper owned by Rupert Murdoch — co-chair of Fox Corp. and executive chair of News Corp — that comes one day after the New York Post said Trump is ‘cheering for an undemocratic coup’ with his efforts to overturn the election he lost.”

Gallup: “Americans are most likely to name President Donald Trump and Michelle Obama as most admired man and woman in 2020.”

“Trump tied former President Barack Obama for the honor last year but edged out his predecessor this year. Trump’s first-place finish ends a 12-year run as most admired man for Obama, tied with Dwight Eisenhower for the most ever.”

“A federal judge in Georgia on Monday ordered two counties to reverse a decision removing more than 4,000 voters from the rolls ahead of the Jan. 5 runoff elections that will decide control of the U.S. Senate,” Politico reports.

“The judge, Leslie Abrams Gardner — the sister of former gubernatorial candidate Stacey Abrams, a prominent ally of President-elect Joe Biden who has led voter registration efforts across the state — concluded that the counties appeared to have improperly relied on unverified change-of-address data to invalidate registrations in the two counties.”

Edward Foley: “President Trump and his supporters are trying to turn the Jan. 6 congressional session for counting electoral college votes into something that it is not and was never intended to be: a forum for litigating Trump’s claims of voter fraud.”

“Never mind that Trump has no evidence to support his assertion that massive fraud is what caused Joe Biden to win the popular vote in enough states for an electoral college victory. The critical point is this: Even if there were such proof, the Jan. 6 session is not the place to present it.”

“The vice chairman of the Massachusetts Republican State Committee is battling COVID-19 after attending what he described as a largely maskless holiday party at the White House earlier this month,” the Boston Globe reports.

Said Tom Mountain: “I didn’t listen to the warnings of my own family, and now I’m paying the price.”

He told WJAR: “Lets put it this way: When I went down to Washington, D.C., for the White House Hanukkah event, I was perfectly fine. And three days later after that event, I was in the hospital… ready to be put on a lifesaving ventilator.”

“Former Trump national security adviser Michael Flynn is going all in on the QAnon conspiracy theory, promoting an online store to sell QAnon hats and T-shirts, the proceeds of which will benefit his partnership with a prominent QAnon booster,” the Daily Beast reports.

“Flynn’s drawn-out legal battle with former Special Counsel Robert Mueller turned him into a hero for QAnon believers. Many QAnon supporters, who rely on mysterious online clues to construct a worldview where the Democratic Party and other institutions are controlled by a cabal of pedophile-cannibals, claim that Flynn is Q, the anonymous figure behind the conspiracy theory.”