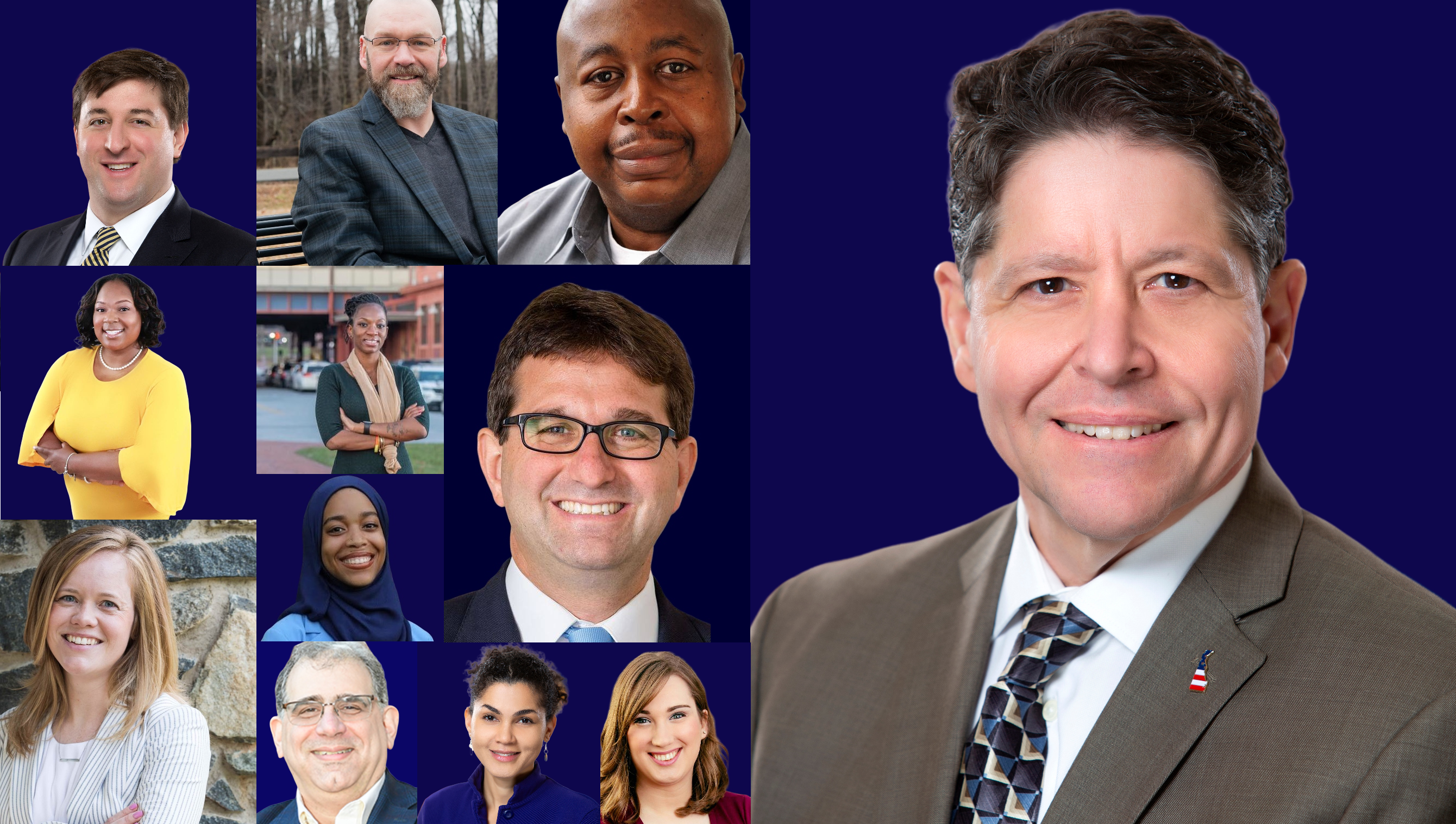 So the worse year of our lives is coming to an end and it is time for some year end retrospectives.   I have decided not to offer a review of the worse of 2020, because that list would be never-ending.   But here are the bright spots of an election year like no other here in Delaware.  Now, this is just my opinion, and you are free to criticize my choices, who I select and who I omit, and I actually encourage it because I am sure I am going to miss something.  So feel free to post in the comments your picks or your preferred order.

1) State Representative Paul Baumbach – Since the beginning of the Pandemic, Rep. Baumbach has been taking the daily numbers of positive COVID tests, number of tests overall, daily new hospitalizations, and the number of current hospitalizations and presenting them in easy-to-understand Facebook posts accompanied by graphs that Paul prepares himself, tracking Delaware’s daily progress (or regress, as it were) with the virus.

It has been an amazing public service, and I have been tracking and reading it daily, as I know many of his constituents and Delawareans have. I think he needs to be recognized for this work and thanked for doing it.   This is not to slight any other public official who has been doing their best to present information to the public about lockdowns, restrictions, and the virus; and helping their constituents in getting access to relief programs and services.  But I feel Paul deserves special recognition.

2) New Castle County Executive Matt Meyer – He has been spectacular during the Pandemic, organizing testing sites that are probably the best in the nation, and coordinating the deployment of Pandemic relief services and money.  He did all this while fighting off a right wing inspired and financed primary challenge from the all too powerful police unions in the form of the candidacy of Maga Jones.   Competent government is something we used to take for granted, and in this day and age, it should be celebrated.

3) New Senate President Pro Tempore David Sokola, New Senate Majority Leader Bryan Townsend and New Senate Majority Whip Tizzy Lockman– Our new and much more progressive Democratic Senate Leadership.  The change was made possible by a number of new progressive Senators getting elected, which we will cover in a moment.   But now this new leadership is also the direct result of the failure and abject obstruction of progressive priorities of the old Senate leadership, which led to the defeat of Senate President Pro Tem David McBride and the removal from the leadership ranks of Majority Leader Nicole Poore.   The Senate enters a new era in January, and the election of this new leadership team is a big bright spot.

And now to those newly elected Senators and Representatives.  Each in their own right is a separate bright spot, but I have decided to group them into categories, and I will order those categories into what I feel are the most important.  First, defeating Republicans and expanding our majority is the most important thing in Democratic politics, making a Blue Delaware bluer.  Second, defeating old obstructionist deadwood do nothing conservative Democrats and replacing them with progressives is the next most important thing.  Third, electing a new generation of liberal and progressive Democrats to replace a retiring generation is as important as it is necessary.

4) Spiros Mantzavinos and Kyle Evans Gay— Finally, we ousted Cathy Cloutier.  And we avenged Patti Blevin’s loss in 2016 by making Anthony Delcollo a one termer like Donald Trump.   Spiros and Kyle defeated a short term and long time Republican incumbents, expanding our majority in the upper chamber by 2, giving us a Super Majority.   To my surprise, Spiros voted for the new Progressive leadership team in the Senate, meaning he could be a surprising Senator.  I don’t mean I thought he was conservative, just that I thought he was a run of the mill liberal Democrat who wouldn’t rock the boat in the caucus.  I am pleasantly surprised.    Kyle ran on a progressive platform, and while some think she will be a standard liberal Democrat like Krista Griffith or Debra Heffernan, I think she could surprise too with some progressive policy actions.

5) Marie Pinkney, Eric Morrison and Madinah Anton Wilson–  The upset of the year was Marie Pinkney defeating Senate President Pro Tem Dave McBride.   It directly resulted in new Senate leadership, and now the residents of the 13th SD have a Senator that actually represents them and lives there.   If you have met her, you know she is a great person.    The next biggest upset was Eric Morrison’s victory of Earl Jaques.  Morrison’s election, along with Madinah Wilson Anton’s victory over career back bencher John Viola, adds much needed progressive voices to the House caucus that has been dying under the weight of an oppressive leadership team of Pete Schwartzkopf and Valerie Longhurst.   While the House leadership was not changed in the wake of these primary victories like it was in the Senate, I think this will be the last session without a leadership change, voluntary or not.  Pete is going to find it difficult trying to steamroll this new progressive chorus in his caucus.

6) Larry Lambert – Larry is off on his own here because while he is a progressive that defeated a Democratic incumbent in a primary, I do not consider Ray Seigfried to be a conservative obstructionist Democrat who had been in office past his expiration date. Indeed, Ray was a nice man and a good representative who had been in office only two years.  He won in 2018 in a very crowded primary that also featured Larry Lambert.   And had the race been a two man race then, Larry likely would have won.  It was a two-man race in 2020 and Larry did win.  His election adds a solid progressive voice to that new chorus in the House, and Larry will be an excellent constituent-service-minded representative.

7) Sarah McBride and She’rae Moore—Sarah McBride is a national star in her own right, working as a spokesperson for the Human Rights Campaign, and being the first transgender person to speak at a national political convention in 2016.  She succeeds Harris McDowell, a wonderful progressive Senator who decided it was time to retire.   Her election marks a generational changing of the guard, but also a societal one, being the first elected transgender Senator in the country.    Meanwhile, She’rae Moore was elected in the Middletown district to replace the unexpectedly retiring Quinn Johnson.  Her election marked a societal change below the canal, as I think she might be the first elected African American or African American woman State Representative or Senator downstate (if you can call Middletown downstate).  I may be wrong on that, but I can’t think of another at the moment. Moore also marks an ideological change, as she is a progressive who is replacing a conservative Democrat.

8) The Delaware Call Team – It is rare that I should be lauding a potential competitor, but the truth is that the progressive liberal left needs more media voices and think tanks to compete with the army of megaphones on the right, so I say the more the merrier.   Visit and read The Delaware Call early and often.  Go there right now in fact.  (But come back to finish this list).  The Delaware Call has two fabulous Managing Editors in Britney Gulledge and Jordan Howell.  Rapsody Johnson is their copy editor and the well known (around these and Delaware Liberal parts) Coordinating Editor is Robert E. Vanella (better known as the Rev or RE Vanella).  He is the host of the Highlands Bunker podcast on which I appeared a year or so ago.   And the equally well known (or at least he should be) Karl Stromberg is their Digital Editor.   I predict great things for this new venture in the new year.

9) Drew Serres of Network Delaware / Leftward Delaware.  I almost included him in the Delaware Call post above because he had a role in organizing or creating that venture too.  He is everywhere.  I call him the Spectacular Serres.  He recruits and trains candidates, recruits and trains those candidate’s staff, and this past year helped out where need on some vital and successful campaigns.  Nearly all of the progressive gains seen in the elections in September and November are at least partly attributable to him in some way, even if tangential.   Let me put it this way, and I don’t think anyone will disagree with this, without Drew Serres, the progressive movement in Delaware would be half as successful, in my opinion.

Finally, 10) Erik Raser Schramm.  Sadly, Mr. Raser Schramm has moved onto to greener pastures as the new New Castle County Deputy Chief Administrative Officer.  But his leadership as our Delaware Democratic Party Chairman for the last four years won’t soon be forgotten.  He set a standard of making party rules and processes much more transparent and fairer, and keeping the state party apparatus out of party primary races, allowing the voters to make those decisions. He was the most progressive Delaware party chair in my living memory.   His successor has big shoes, or farmer boots, to fill.   Best wishes to Erik and his wonderful family.