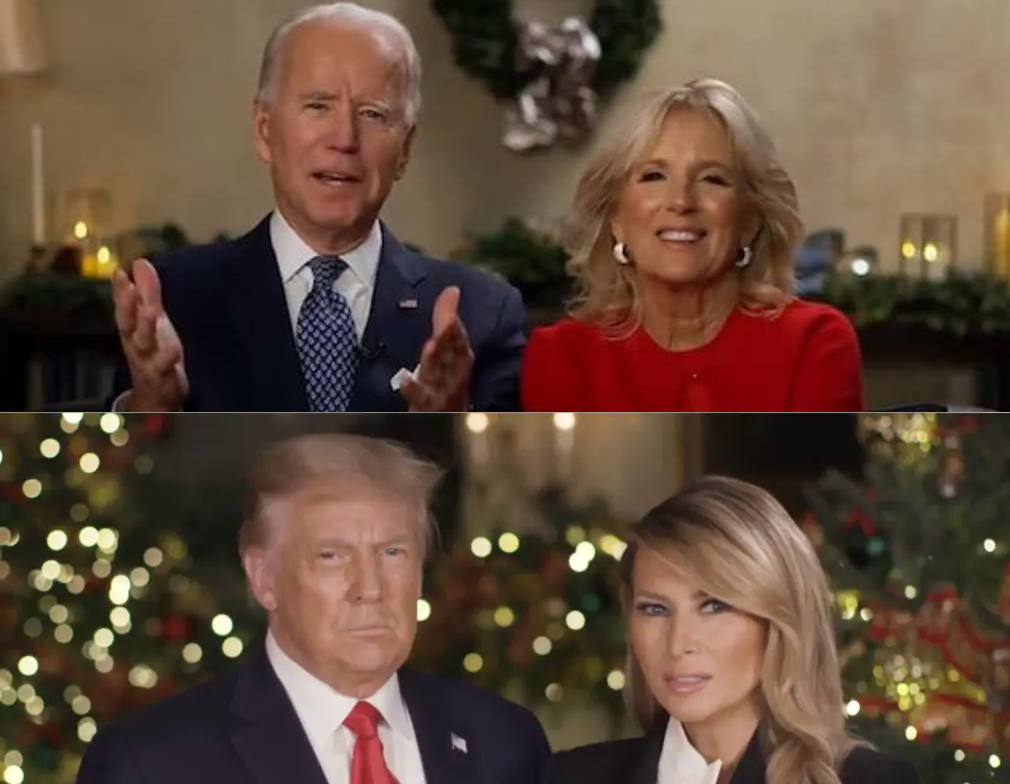 Joe Biden and President Trump delivered starkly different Christmas messages Friday, with the president-elect emphasizing in a video the pain that the Covid-19 pandemic has wrought and reminding Americans of “our common humanity,” while Trump made only the faintest reference to the coronavirus, NBC News reports.

“He also emphasized that he and Jill Biden wouldn’t be seeing extended family this year, to honor the public health guidelines made necessary by the pandemic.”

Nashville authorities believe an explosion that occurred in downtown Nashville early Christmas morning was an “intentional act” and sparked by a vehicle, the Tennessean reports.

Playbook: “The president is complaining to people he speaks to that the coronavirus/government funding package has too much ‘pork,’ as he says, and the direct payments are too low. The bill has been flown to Florida from Washington for his signature. No one we can find knows if he’ll sign it.”

“Unemployment benefits run out Saturday. And the government shuts down Monday.”

“Here’s the scary thing: The House is in on Monday — the day the government runs out of spending authority — but the Senate doesn’t come back until Tuesday, which is, of course, after the funding deadline.”

President Trump tweets: “I saved at least 8 Republican Senators, including Mitch, from losing in the last Rigged (for President) Election. Now they (almost all) sit back and watch me fight against a crooked and vicious foe, the Radical Left Democrats. I will NEVER FORGET!”

President Trump continued to push raising the amount of direct payments the massive Covid stimulus package should provide to Americans, but gave no indication on whether he would sign or veto the existing bill, NBC News reports.

Said Trump: “Made many calls and had meetings at Trump International in Palm Beach, Florida. Why would politicians not want to give people $2000, rather than only $600? It wasn’t their fault, it was China. Give our people the money!”

“Millions of Americans who are hours away from losing unemployment aid or the small business they have spent years building have a simple plea to President Trump and Congress: Please help us,” the Washington Post reports.

The newspaper “has been inundated with messages and phone calls from people on the verge of losing their homes and cars and going hungry this holiday who are stunned that President Trump and Congress cannot agree on another emergency aid package. Several broke down crying in phone interviews.”

“This is rotten to the core.” — Sen. Ben Sasse (R-NE), quoted by the Washington Post, on President Trump pardoning Paul Manafort and Roger Stone.

“A historic deal on the UK’s future trading and security relationship with the European Union has been struck on Christmas Eve, a week before the end of the Brexit transition period, triggering a victory cry from Downing Street and sombre reflection in Brussels,” The Guardian reports.

“As the country leaves the single market and customs union on December 31, new arrangements allowing for tariff-free trade in goods and close police and judicial cooperation will come into force.”

President-elect Joe Biden told the New York Times that he will be able to work with Republicans because of his years working alongside them, despite a sharply divided Congress.

Said Biden: “My leverage is, every senior Republican knows I’ve never once, ever, misled them. I’ll never publicly embarrass them.”

“Millions of Americans are traveling ahead of Christmas and New Year’s, despite pleas from public health experts that they stay home to avoid fueling the raging coronavirus pandemic that has killed more than 320,000 nationwide,” the AP reports.

“Many people at airports this week thought long and hard about whether to go somewhere and found a way to rationalize it.”

“More than 1 million Americans have received Covid shots, but the government isn’t likely to make good on the goal of vaccinating 20 million people by the end of this month,” Politico reports.

Washington Post: “A joint session of Congress on Jan. 6 will take the last step in formalizing President-elect Joe Biden’s victory, and Pence, in his role as president of the Senate, will preside over the session after four years of ceaseless efforts to demonstrate his loyalty to Trump.”

“Some die-hard Trump supporters are declaring that Pence will be a traitor if he does not somehow derail the proceedings. There is no evident way for him to do that even if he wanted to, but such demands ratchet up the pressure on Pence, who is unlikely to escape their wrath — or Trump’s.”

“Pence is hoping for a low-key Jan. 6 and is not planning any unnecessary drama, aides said, intending to stick to his perfunctory role. He is eyeing a trip overseas soon after.”

“Hours before President Trump retweeted a message for his vice president to ‘act’ in stopping the ratification of the Electoral College, he met for more than an hour in the Oval Office with Mike Pence, whom he has complained recently isn’t doing enough to support his bid to overturn the election,” CNN reports.

“He is literally trying to burn this country down on his way out.” — Sen. Amy Klobuchar, talking about President Trump in a MSNBC interview.

Attorney General Bill Barr sent a parting note to his colleagues on Wednesday to mark the end of his time leading the Department of Justice, stating that it’s been a “great honor to serve once again in this role,” NBC News reports.

Axios: “Barr will be replaced in an acting capacity by Deputy Attorney General Jeffrey Rosen, who multiple administration officials privately say now has the worst job in Washington.”

Wall Street Journal: “Current and former officials say Mr. Rosen has a good relationship with the president, who they say may expect his new acting attorney general to do things Mr. Barr was unwilling to do.”

Bill Kristol: “It could, obviously, be kind of random–a date picked last week to allow Barr to get things in order, an accommodation of Barr’s family schedule, etc. But it could also be that Barr very much wanted to get out before Dec. 24, and/or that Trump wanted him out by then.”

“One obvious possibility discussed in the White House: Trump has spoken about a bunch of pardons on Christmas Eve. Some of the names may have been too much for Barr — so they agreed on his departure on Dec. 23. (Or the pardons will be a few days later, but the principle holds — Barr wanted out, or Trump wanted him out, first.)”

“But it could be more than pardons. Yesterday Barr suggested there were several things he wouldn’t do that Trump wanted him to do as ranging from appointing special counsels for Hunter Biden or election fraud, to giving a legal OK for seizing voting machines or for various types of Insurrection Act-type moves by the president. Can one be confident Barr’s successor as AG, Jeffrey Rosen, will also say no?”

More: “I’m also reliably told senior military officials in the Pentagon are more, not less, alarmed than they were a few weeks ago when Mark Esper was fired. The new crew of Trump loyalists in the most senior civilian positions don’t seem there only to burnish their resumes, as one person put it. They’re trying to figure out, in coordination with people in the White House, ‘how to make things happen.’”

“The United States is considering quickly closing its embassy in Baghdad after a series of rocket attacks on Iraq’s Green Zone by Iranian-backed militias,” Axios reports.

“The move, among several options being considered, could be a prelude to retaliation against Iran, which President Trump and Secretary of State Mike Pompeo have branded a state sponsor of terror. The embassy has also played a pivotal role in supporting a shaky Iraqi government.”

Rep.-elect Luke Letlow (R-LA) has been transferred to an intensive care unit at a Shreveport hospital as he continues treatment for COVID-19, the Baton Rouge Advocate reports.

Kevin Liptak: “No one expected him to fade quietly into retirement. And no one, at this point, is particularly obliged to pay attention — a fact Trump seems very aware of as he desperately seeks to grasp hold of the spotlight for however long it will shine, even as his staff is provided instructions for boxing up their desks and cleaning out their microwaves.”

“The effect is a president more erratic than ever. Though he has all but disappeared from public view, Trump is wielding what executive powers he has left to rancorous effect, ensuring his presence is felt even as he holes up in virtual isolation. Instead of off-the-cuff rallies or shouting underneath his helicopter, Trump is holding forth in pre-produced videos and, as always, tweeting.”

“The Trump administration has formally notified Congress that it intends to sell nearly $500 million in precision bombs to Saudi Arabia, a transaction that is likely to fuel criticism from lawmakers who object to arming the Persian Gulf nation over its record of human rights abuses and stifling dissent and role in the war in Yemen,” the Washington Post reports.

“President-elect Joe Biden’s historic choice for secretary of defense is running into hurdles on Capitol Hill, as key Democrats express concerns publicly and privately about whether installing a retired four-star general at the helm of the Pentagon further erodes civilian oversight of the military,” Politico reports.

“Rep. Seth Moulton, an influential member of the House Armed Services Committee, on Wednesday became the most prominent House Democrat to say he will not vote to grant retired Gen. Lloyd Austin a waiver to the law barring recently retired military officers from serving as defense secretary.”

Tim Naftali: “Will Trump be the first to test the constitutionality of a self-pardon, just as he has tested the limits of so many other constraints on presidential power? Precedent has never mattered to him. He has reportedly been asking aides about the possibility of a self-pardon since 2017. Unlike Nixon, he can’t even hope for a pardon from his immediate successor. But neither can he count on the Supreme Court to uphold a self-pardon; in summarily dismissing Trump’s effort to overturn the election, the justices reminded him that a president should not count on the support of his appointees.”

“But in the final days of the presidency of Donald Trump, very little seems unimaginable anymore.”

Michael Gerson: “Looking on the bright side of a humiliating national disaster, the manner of President Trump’s departure from power has clarified why he must never hold power again.”

“On one side are the lunatics — among them Giuliani, Powell and Flynn — who want Trump to violate laws and assume authoritarian powers. On the other side are sycophants who supported Trump’s spurious legal challenges to the election result but apparently draw the line at treason. By most accounts, Trump’s sympathies lie with the lunatics.”