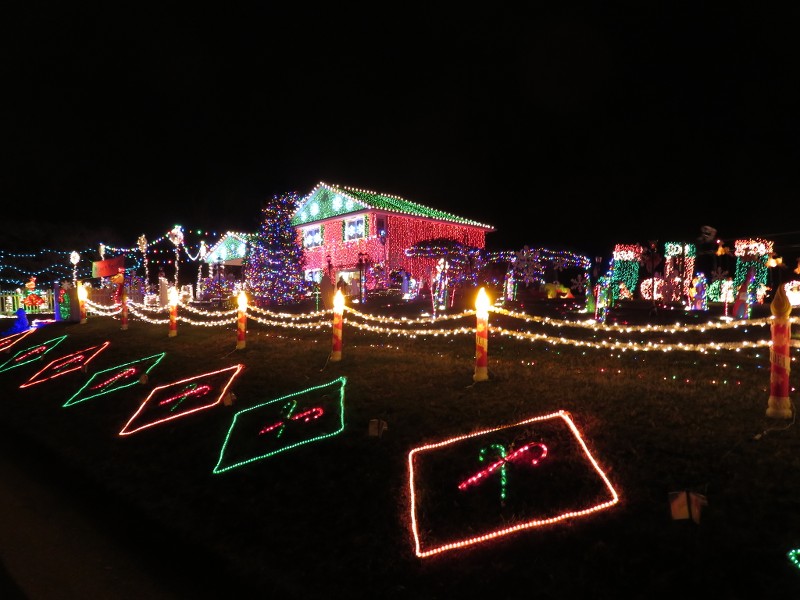 The biggest Christmas light display in the state is usually the Christmas Light House, on Red Lion Road in Red Lion. So famous is the display, that the driveway of the house has officially been designated Santa Claus Lane by the Department of Transportation, and the homeowner is officially known as Santa Claus for the state of Delaware. Photo by xzmattzx.

President Trump on Wednesday made good on his promise to veto the annual military policy bill, setting up what could be the first veto override of his presidency after both chambers overwhelmingly approved the legislation.

Politico: “On Tuesday night, Trump blindsided all of Washington — including his own staff — with a series of 11th-hour demands to amend coronavirus relief and government funding legislation that his own administration had helped carefully craft and supported. Overnight and into Wednesday, senior Republicans, Hill aides and even White House officials scrambled to figure out what Trump actually wanted, just as lawmakers — and Trump — prepare to leave town for the holidays.”

“There’s no clear answer, though. No one on either side of Pennsylvania Avenue appears to know what Trump’s plan is — or even if there is one. Hill offices had not received any guidance as of Wednesday afternoon, while House Republicans scheduled a call at 3 p.m. to strategize.”

Said one Republican on Capitol Hill: “A complete clusterfuck.”

“With four weeks left in President Trump’s term, he is at perhaps his most unleashed — and, as events of the last few days have demonstrated, at the most unpredictable point in his presidency,” the New York Times reports. “He remains the most powerful person in the world, yet he is focused on the one area in which he is powerless to get what he wants: a way to avoid leaving office as a loser.” “He spends his days flailing for any hope, if not of actually reversing the outcome of the election then at least of building a coherent case that he was robbed of a second term.”

Wall Street Journal: “Aides said they view the tweet more as the president voicing his displeasure with the bill than an actual veto threat. One aide said Mr. Trump’s announcement amounted to an effort to make Congress squirm.”

New York Times: “Current and former administration officials speculated on Tuesday evening that Mr. Trump did not like the narrative that he had been sidelined from the negotiations and that calling for higher direct payments was a political move to please his base.”

Said one administration official to the Washington Post: “So dumb. So, so dumb.”

So how does this end? Playbook: “No one knows. Some say President Trump is in burn-it-down mode and is more than willing to veto the Covid relief/funding package, ending his presidency in a lengthy shutdown, with bluster and crisis. Others say he’s not explicitly threatening a veto, and everyone should calm down.”

“Who cares what these people say, at this point. We’re not convinced anyone has any idea what the president is doing or what goal he’s driving toward.”

“He’s in the midst of blowing up a package his White House said he’d sign over provisions the administration proposed… Maybe he comes out today en route to Florida and says he was just kidding — but maybe not, and he’s not running a corner store, he’s running the world’s most important country in the middle of a pandemic, so we can’t work with maybes.”

Daily Kos: “Pelosi had the right answer: “Let’s do it!” And congressional Democrats piled on, putting the onus on McConnell to “DO THIS!” as Sen. Chuck Schumer tweeted. […] What we do know is that the House is in for a short, pro-forma session Thursday, Christmas Eve. Pelosi and Majority Leader Steny Hoyer are ready to use that session to ask for unanimous consent and pass a bill this week to release those $2,000 checks. That bill is ready and waiting, courtesy Reps. Alexandria Ocasio-Cortez and Rashica Tlaib. However, it only takes one Republican to be on the floor Thursday to block that and that’s probably what’s going to happen. But! On Monday, Democrats can come back (which they were planning on anyway) and put the bill up under suspension of the rules, the procedure they use to pass non-controversial bills, or in this case a bill to put even more pressure on Mitch McConnell. Suspensions require 2/3 majority, which could be achievable on the Monday after Christmas, and can only happen on Mondays and Tuesdays. So those are the House options.”

“The pardons of Manafort and Stone reward two of the most high-profile and widely condemned former advisers of the President, both of whom were indicted by special counsel Robert Mueller, went to trial and were convicted by juries of multiple crimes.”

New York Times: “It was the second wave of pardons and commutations by the president in two days, showing his willingness to use his power aggressively on behalf of loyalists.”

Axios: “It’s a continuation of the president’s controversial pre-Christmas pardon spree, which began in earnest Tuesday night with pardons for a trio of convicted former GOP congressmen and several military contractors involved in the 2007 massacre of Iraqi civilians.”

“Meadows, accompanied by Secret Service agents, showed up at the Cobb County Civic Center, where investigators from the Georgia Bureau of Investigation and secretary of state’s office were reviewing absentee ballot envelopes to check whether voter signatures match those on file.”

Meadows was overheard saying: “I’m not making any allegations as much as I am trying to get to the truth.”

Washington Post: “Pence and his advisers have begun thinking about how to handle Jan. 6 and escape Trump’s ire, but no final decisions have been made.” Said one administration official: “The vice president does not want to leave on bad terms with the president, I can assure you that.”

“President Trump has already invoked the Defense Production Act, or DPA, to speed the production of medical supplies and components to test for the coronavirus, and he has raised the possibility of using the law again for vaccines. Manufacturers have said there could be a shortage of components to make the vaccines.”

Politico: “The next Congress will begin in a haze of uncertainty — and that has consequences for President-elect Joe Biden. With the Senate majority unknown until the Jan. 5 Georgia runoffs, much of the chamber’s business remains up in the air — potentially for days or weeks after if the elections are tight and certification is postponed. And that could mean more delay for staffing Biden’s cabinet and implementing his agenda.”

“The incredibly close race for the 22nd Congressional District got even closer Tuesday, as about 90 new votes from a bundle of about 2,500 affidavit ballots from Oneida County were counted,” the Syracuse Post Standard reports.

“Incumbent Anthony Brindisi (D) and Claudia Tenney (R) are separated by three to five votes… The candidates’ attorneys have been locked in a courtroom battle for nearly two months to determine the winner.”

“The Russian hackers who penetrated United States government agencies broke into the email system used by the Treasury Department’s most senior leadership, the first detail of how deeply Moscow burrowed into the Trump administration’s networks,” the New York Times reports.

Slate: “The odds-shifting bonanza on election night, with all that money on the line, was not a sign that the oddsmakers knew something the mainstream media did not. Instead, the Trump spike was the peak of a phenomenon that had been unfolding all year. Many Trump supporters were certain he could not lose, and they plowed so much money into betting on him that they distorted markets in his (and ultimately, the sportsbooks’) favor.”

Said gambling writer Collin Sherwin: “It’s the most irrational market I ever saw.”

John Gruber: “The MAGA types were still wagering real money on Trump after the election had been called for Biden. It was like taking candy from babies who deserved to have their candy stolen.”

President Trump backed a 2022 challenge to Sen. John Thune (R-SD), tweeting that his political career will be “over” and calling Thune a “RINO” and “Mitch’s boy.” He added: “South Dakota doesn’t like weakness.”

Axios: “Trump wants the Republican Party to remain beholden to him, and is desperate to retain his GOP power past Jan. 20. Top Republicans are increasingly queasy about the two runoffs in Georgia on Jan. 5 that will determine which party controls the Senate. Last night’s White House actions undermine the GOP Senate candidates by fomenting turmoil and distraction, and robbing the senators of a clear win on the stimulus.”

“Less than a month before he is sworn in, President-elect Joe Biden has not yet selected his attorney general, a key role given how politicized the department became under President Donald Trump and while federal officials are investigating Biden’s son,” Bloomberg reports.

“President Trump on Tuesday announced plans to appoint another slate of top allies to various government boards, yet another sign that his time in office is winding to a close,” Politico reports.

Donald Trump informed the conspiracy-theory-driven MAGA attorney Sidney Powell on Monday that he does not intend to appoint her “special counsel” to investigate “election fraud,” the Daily Beast reports.

Asked whether Trump told Powell that she wouldn’t be “special counsel,” Rudy Giuliani—who leads the president’s post-election legal team—said: “Yes,” adding, “she is no longer part of our team. She is on her own.”