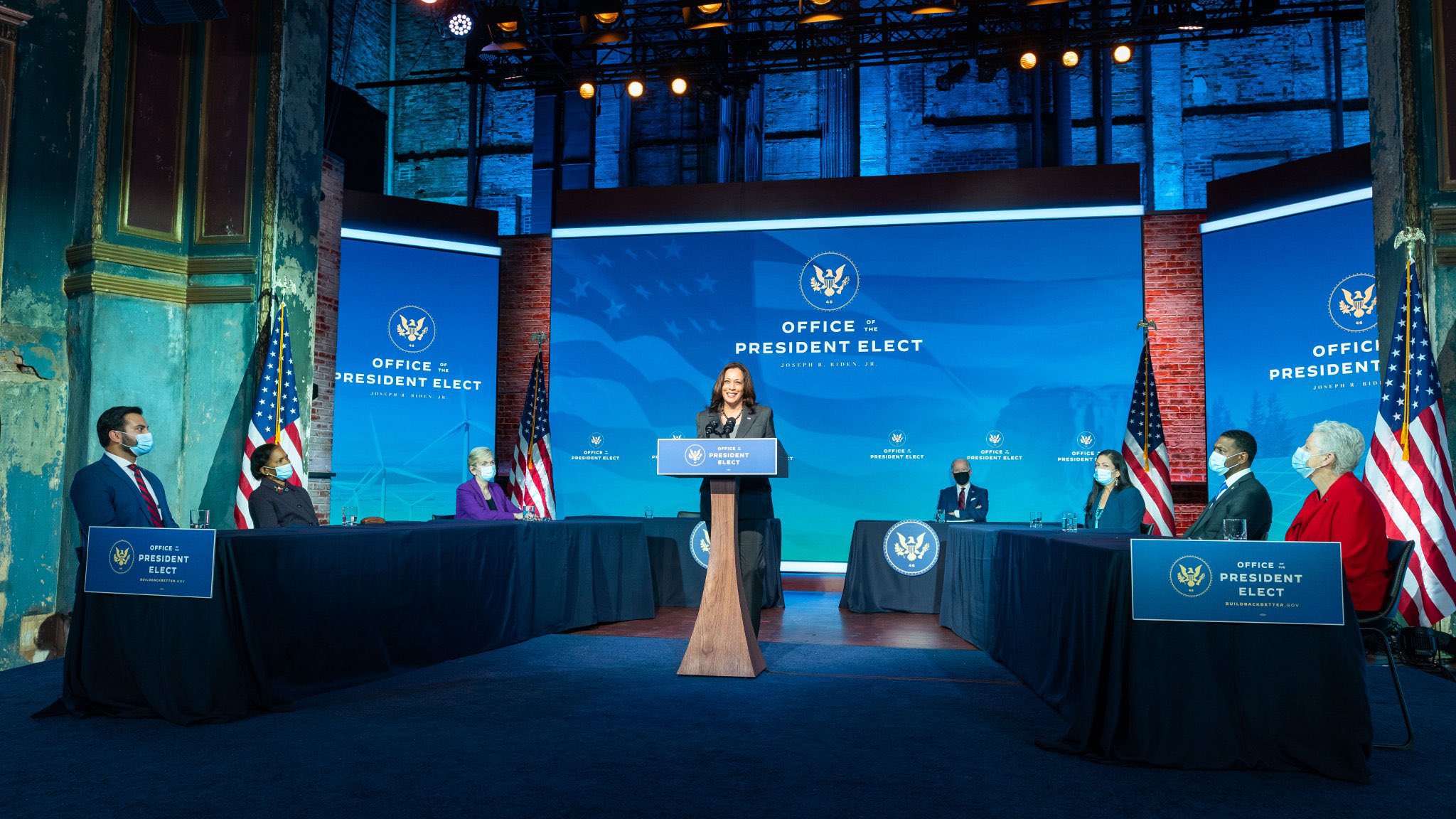 “President Trump granted clemency on Tuesday to 20 people, including three former Republican members of Congress and two people were convicted of crime as part of the investigation into Russian interference in the 2016 president election,” the Washington Post reports.

“The pardons and commutations came as Trump has been exploring how to use his clemency powers to reward friends and allies in the waning days before leaving office next month.”

CNN: “The pardons came at the recommendation of Trump allies in Congress and, in some cases, the conservative media.”

“Mr. Biden announced on Monday that he was appointing David Kamin, the former Obama official, as deputy director of the NEC, the White House’s economic policy arm. Bharat Ramamurti, the former Warren aide, will be deputy NEC director for financial reform and consumer protection. The president-elect also named Joelle Gamble as special assistant to the president for economic policy. The roles don’t require Senate confirmation.”

“President-elect Joe Biden is poised to nominate Connecticut education commissioner Miguel Cardona as his education secretary, a decision that could be one of the final Cabinet selections before Christmas,” CNN reports.

“Biden has set a goal of reopening most schools within the first 100 days of taking office, a position that has touched off controversy with some teachers’ unions. Cardona has been a leading proponent of sending children back to school, saying too many students are falling behind during virtual learning amid the coronavirus pandemic.”

“Outgoing Attorney General William Barr said Monday he saw no basis for the federal government seizing voting machines and that he did not intend to appoint a special counsel to investigate allegations of voter fraud — again breaking with President Trump as the commander in chief entertains increasingly desperate measures to overturn the election,” the Washington Post reports.

Barr said that while he was “sure there was fraud in this election,” he had not seen evidence that it was so “systemic or broad-based” that it would change the result.

Said Barr: “If I thought a special counsel at this stage was the right tool and was appropriate, I would name one, but I haven’t, and I’m not going to.”

“It’s hard to know what counts as a fuckup when you work for Donald Trump. Looked at by the standards of a traditional campaign with a traditional candidate who possesses a minor-to-moderate capacity for traditional human feelings, like shame, what happened at Four Seasons Total Landscaping, or the fact that it happened at all, was a disaster. A press conference is supposed to convince the public of whatever case you’re making through the act of being — or more likely pretending to be —transparent.”

“That is, obviously, not what happened on the blacktop. But looked at in terms of attention generated and relevance sustained, two other goals of a press conference, the thing was a clear success. Plus it was the rare political joke that appealed to everyone.”

“President Trump has turned to a fringe group of advisers peddling increasingly dubious tactics to overturn the results of the election, creating a dire situation that multiple senior officials and people close to the President say has led to new levels of uncertainty at how Trump will resist the coming end to his tenure,” CNN reports. Said one official: “No one is sure where this is heading. He’s still the President for another month.”

“President Trump, in his final days, is turning bitterly on virtually every person around him, griping about anyone who refuses to indulge conspiracy theories or hopeless bids to overturn the election,” Axios reports. “Targets of his outrage include Vice President Pence, chief of staff Mark Meadows, White House counsel Pat Cipollone, Secretary of State Pompeo and Senate Majority Leader Mitch McConnell.”

“Trump thinks everyone around him is weak, stupid or disloyal — and increasingly seeks comfort only in people who egg him on to overturn the election results. We cannot stress enough how unnerved Trump officials are by the conversations unfolding inside the White House.”

Max Boot: “Never before in U.S. history has there been a record of a president discussing a military coup to stay in office. Is there any doubt that if Trump could find any active-duty generals willing to carry out this plot against America, he would give it the go-ahead? In this instance, all that is preserving the Constitution is the military’s fidelity to the rule of law.”

Stephen Collinson: “Joe Biden will be president in 30 days. Until then, the question is how much damage can be done by a vengeful, delusional soon-to-be ex-President swilling conspiracy theories, whose wild anti-democratic instincts are being encouraged by fringe political opportunists.”

“Donald Trump will retain the awesome powers of the presidency until noon on January 20, and there’s never been a time when he has been subject to as few restraining influences or has had a bigger incentive to cause disruption.”

Daily Beast: “In the dying days of his presidency, Donald Trump has taken to asking some aides and advisers about the process of naming airports after former U.S. presidents, according to two people who’ve heard him recently inquiring on this.”

“One of the two sources relayed that, in the past three weeks, Trump mentioned that ‘no president’ wants an American airport that has a bad reputation or crumbling infrastructure named after them. The other knowledgeable source said that Trump had, at one point since the 2020 election, offhandedly asked what kind of ‘paperwork’ was necessary to get an airport named after a former president.”

“The House of Representatives on Monday passed a mammoth 5,593-page tax and spending package that packages together emergency economic relief, government funding and tax cuts,” the Washington Post reports.

“The measure is one of the largest pieces of legislation ever passed by a chamber of Congress.”

Washington Post: “The notion that more aid is necessary — Biden at times has said talks should start as early as January — sets up perhaps the first major legislative test for the new president and his self-proclaimed negotiating skills.”

President Trump, in a stunning Tuesday night tweet, called the $900 billion Covid relief bill passed by Congress an unsuitable “disgrace” and urged lawmakers to make a number of changes to the measure, including bigger direct payments to individuals and families, CNBC reports.

The president’s tweet, which included a video of him discussing what he considers the bill’s many flaws, came less than 24 hours after the Senate passed the measure.

Axios: “The surprise announcement could delay desperately needed aid for millions of Americans if Trump decides not to sign the package as it stands. It also risks a government shutdown.”

Senate Majority Leader Mitch McConnell (R-KY) gave an interview to the Louisville Courier Journal in which he confirms that Joe Biden will be the next president despite continued rumbling from many GOP lawmakers.

“Two Biden nominees who face a tough road are Neera Tanden, a hyper-partisan Democratic operative (with detractors on the right and left) nominated for director of the White House Office of Management and Budget; and Xavier Becerra, nominated for secretary of Health and Human Services with an extremist, pro-abortion record that most Senate GOP’ers can’t stomach.”

“Senate Majority Leader Mitch McConnell (R-KY) announced early Tuesday morning that the Senate will return to Washington on Dec. 29 in order to respond to a potential veto from President Trump of a mammoth defense bill,” The Hill reports.

“McConnell, speaking from the Senate floor, said that he had struck a deal with Senate Minority Leader Charles Schumer (D-N.Y.) for the chamber to return for a rare post-Christmas session where he said they will ‘process’ a veto override, if it’s passed by the House.”

Playbook: “For a guy who likes to win, and puts so much stock in not looking like a loser, President Trump is throwing an awful lot of weight behind two efforts that, if you’re charitable, you can say he is not certain to win, but if you’re realistic, you can definitively declare he is likely to lose in a publicly humiliating fashion.”

“First, Trump says he is going to veto the National Defense Authorization Act — which has passed every year for 59 years. Aides and congressional allies have made it clear to Trump that his veto is likely to be overridden, and have tried to get him to back off, but he does not at all appear moved by their pleas.”

Second, the president is spending his final days in the White House interested in a campaign to pressure members of Congress to join a futile effort to overturn the 2020 election.”

Federal prosecutors have discussed making a legal request for Rudy Giuliani’s electronic communications, two sources familiar with the probe tell NBC News, a sign that the investigation into President Trump’s personal attorney remains active and may soon be ramping up.

“It’s an extraordinary broadside against McConnell by the sitting president and most popular Republican in the party, ahead of a crucial runoff election in Georgia on Jan. 5 that will determine control of the Senate.”

Said Trump: “Sadly, Mitch forgot. He was the first one off the ship.”

Washington Post: “Death is now everywhere and yet nowhere in America. We track its progress in daily bar graphs. We note its latest victims among celebrities and acquaintances. Yet, in many parts of America, we carry on — debating holiday plans, the necessity of mask mandates, how seriously to take the virus, whether it’s all a hoax.”

“In the face of one of the biggest mass casualty events in American history, we are growing increasingly numb to death, experts say — numb to the crisis and tragedy it represents and to the action it requires in response. Something happens in the brain when fatalities reach such high numbers, say psychologists who have studied genocides and mass disasters. The casualties become like a mountain of corpses that has grown so large it becomes difficult to focus on the individual bodies.”

“This is the deadliest year in U.S. history, with deaths expected to top 3 million for the first time — due mainly to the coronavirus pandemic,” the AP reports.

“Final mortality data for this year will not be available for months. But preliminary numbers suggest that the United States is on track to see more than 3.2 million deaths this year, or at least 400,000 more than in 2019.”

Mitch Daniels, who was budget director during the Bush administration, writes in the Washington Post that Senate Republicans could restore a bit of civility by confirming Neera Tanden for his old job.

“The pattern of permitting new presidents to form Cabinets of their own choosing, and enabling them to get started promptly, began to erode after the inauguration of the administration I served. President Barack Obama saw four of his 15 nominees delayed beyond his first weeks in office. Then President Trump was blocked on all but three. Now we read that an opposition Senate — if that is what results from the coming runoff elections in Georgia — may challenge a large number of President-elect Joe Biden’s nominees.”

“News reports indicate that one nominee to be so targeted is Neera Tanden, proposed for the office in which I once served. Let’s hope a different view prevails regarding Biden’s choices, starting with that appointment. It may sound old-fashioned, but to me there is no good reason to depart from a presumption of deference in this instance.”