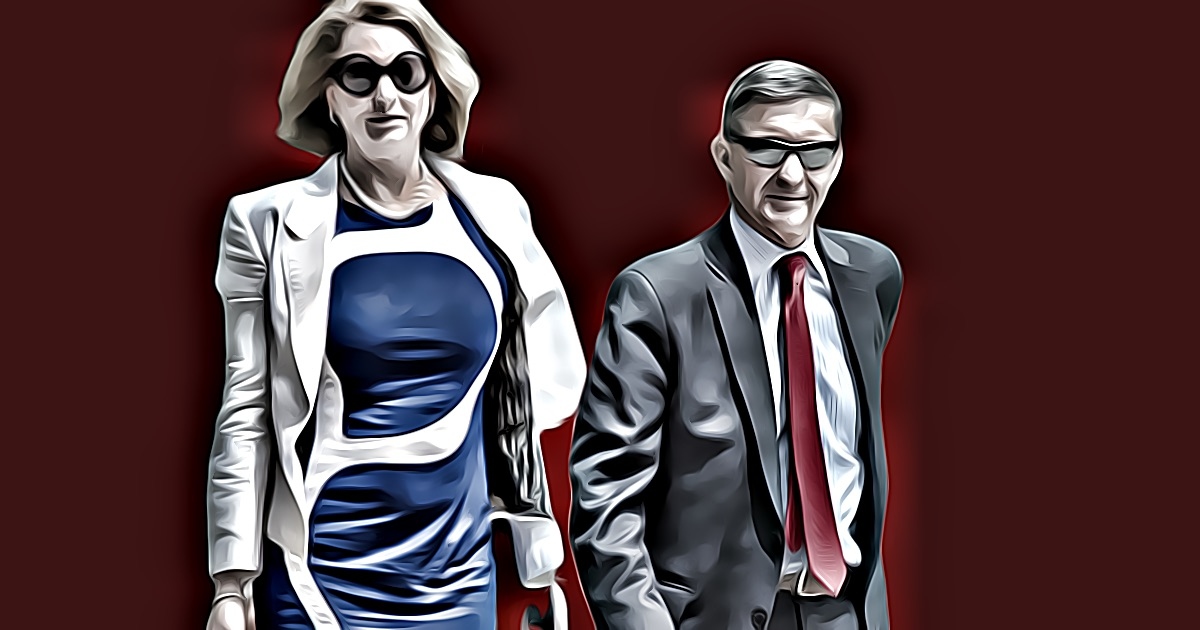 Jonathan Swan: “Senior Trump administration officials are increasingly alarmed that President Trump might unleash — and abuse — the power of government in an effort to overturn the clear result of the election.”

“These officials tell me that Trump is spending too much time with people they consider crackpots or conspiracy theorists and flirting with blatant abuses of power.”

“Their fears include Trump’s interest in former national security adviser Michael Flynn’s wild talk of martial law; an idea floated of an executive order to commandeer voting machines; and the specter of Sidney Powell, the conspiracy-spewing election lawyer, obtaining governmental power and a top-level security clearance.”

Maggie Haberman: “Sources who have gotten used to Trump’s eruptions over four years sound scared by what’s transpired in the past week when I’ve talked to them.”

Rudy Giuliani pressed the Department of Homeland Security to seize possession of voting machines as part of a push to overturn the results of the election, the New York Times reports. Giuliani was told the department does not have the authority to do such a thing.

The Wall Street Journal reports deploying the military was also discussed at a White House meeting but nixed.

“President Trump on Friday discussed making Sidney Powell, who as a lawyer for his campaign team unleashed a series of conspiracy theories about a Venezuelan plot to rig voting machines in the United States, a special counsel investigating voter fraud,” the New York Times reports.

“It was unclear if Mr. Trump will move ahead with such a plan.”

“Most of his advisers opposed the idea, two of the people briefed on the discussion said, including Rudolph W. Giuliani, the president’s personal lawyer, who in recent days sought to have the Department of Homeland Security join the campaign’s efforts to overturn Mr. Trump’s loss in the election.”

“Senior congressional lawmakers attempting to complete an emergency coronavirus relief package this weekend slammed into a major roadblock on Saturday over Republican demands to limit the authority of the Federal Reserve,” the Washington Post reports.

“A late push from Sen. Patrick Toomey (R-PA) to rein in the nation’s central bank had already divided lawmakers over the last several days. But the impasse appeared to grow significantly wider on Saturday, as congressional leadership and rank-and-file senators on both sides of the aisle dug in over the issue, imperiling prospects for a deal.”

“Congressional leaders on Saturday morning were still scrambling to clinch a coronavirus relief deal, just two days before lawmakers face the threat of yet another shutdown,” Politico reports.

“Both chambers now plan to hold a rare weekend session days before Christmas, with negotiators in both parties saying they aim to reach a final agreement within hours.”

Playbook: “Has a president ever been so absent during a crisis? Congress has been struggling with a Covid-relief deal, and the man who got to the White House on his deal bonafides has been completely silent, uninvolved and seemingly uninterested.”

Secretary of State Mike Pompeo publicly blamed Russia for the months-long cyber hack of agencies across the U.S. government, Politico reports. Said Pompeo: “This was a very significant effort, and I think it’s the case that now we can say pretty clearly that it was the Russians that engaged in this activity.” But the Russian asset currently serving out his last 30 days as President disagrees.

Traitor Trump appeared to contradict Pompeo, tweeting that he has been “fully briefed” and suggesting that “it may be China” that’s responsible for the hacking of federal agencies, the Washington Post reports. Said Trump: “The Cyber Hack is far greater in the Fake News Media than in actuality. I have been fully briefed and everything is well under control.”

Axios: “Cybersecurity experts, intel officials and policymakers universally agree the hack was the work of a unit of Russian cyber operators known as Cozy Bear, believed to be backed by Vladimir Putin’s intelligence services. And there’s widespread concern that they’re still in U.S. government and corporate computer systems, undetected.”

Meanwhile, “the Trump administration has informed lawmakers of its plan to shutter its two remaining consulates in Russia,” CNN reports. “Their closures would leave the US with only one diplomatic outpost in Russia — the US Embassy in Moscow — at a time of heightened tensions between the two nations and the notice comes as President-elect Joe Biden prepares to take the helm of the US government.”

When Biden becomes President, all diplomatic relations with Russia will be severed, and the rules of engagement will be amended to allow the immediate shoot down or sinking of any Russian aircraft or ship that harasses American military forces any where in the world.

“Alarmed by a what he called a faster-spreading variant of the coronavirus, Prime Minister Boris Johnson abruptly reversed course on Saturday and imposed a wholesale lockdown on London and most of England’s southeast,” the New York Times reports.

“The decision, which Mr. Johnson announced after an emergency meeting of his cabinet, came after the government got new evidence of a variant first detected several weeks ago in Kent, southeast of London, which the prime minister asserted was 70 percent more transmissible than previous versions.”

Bloomberg: “After emergency talks on the virus mutation with his top officials, the prime minister canceled his plan to ease pandemic rules for five days during the holiday. Household mixing will be banned in London and the south-east and socializing restricted to just Christmas Day across the rest of England. Residents across the country were told to stay in their local areas.”

As Vice President Mike Pence sat for his COVID-19 vaccine shot on Friday morning, governors’ offices across the country were fuming, confused as to why their states were set to receive significantly fewer Pfizer doses than originally expected, the Daily Beast reports.

“President-elect Joe Biden is scheduled to publicly introduce his climate and energy team on Saturday, a history-making group that will be tasked with advancing his ambitious climate policy and strengthening safeguards against pollution,” Reuters reports.

“Biden has promised to make tackling climate change one of the pillars of his Democratic administration. But with a slim majority in the U.S. House of Representatives and control of the U.S. Senate still undecided, Biden and his new team may see little success in Congress and instead rely on rules from his regulatory agencies to enact sweeping change.”

Maeve Reston: “Trump ran for president pretending he was the consummate dealmaker, the chief executive who could make things happen with a snap of his fingers. He will go down in history as a president who worsened the grief and tragedy of the most consequential pandemic in 100 years by being contemptuous of masks and the safety precautions designed by his own administration — a man incapable of empathy, who chose to remain cocooned in his White House bubble at a time when leadership would have mattered.”

“For weeks now, Trump has spent most of his time plotting how to nullify the results of President-elect Joe Biden’s November victory as he has fleeced his supporters to pay for a string of ill-conceived lawsuits that were tossed out of court by some of his own judicial appointees. When those efforts failed, he began looking ahead to January 6 when a joint session of Congress meets to formally count the Electoral College results — seeing another opportunity to try and thwart the democratic process.”

Tucker Carlson was slammed on social media as dangerous, irresponsible and “truly, truly evil” for his monologue Thursday night sowing doubt about the rollout of the coronavirus vaccine, the HuffPost reports.

Said Carlson: “In this country, we control our own bodies. They’re always telling us that. But no. Suddenly, the rules have changed. On the question of the corona vaccine, our leaders are definitely not pro-choice. Their view is do what you’re told, and don’t complain, and no uncomfortable questions.”

“If Joe Biden picks Merrick Garland to be his attorney general, he could cost his party control of one of the most important judicial appointments in America — and many Democrats do not want the president-elect to take that chance,” Axios reports.

“Biden still hasn’t named his choice to lead the Justice Department, and if he taps Garland, it would open up his seat on the D.C. Circuit Court of Appeals. If Democrats don’t win both Georgia Senate runoff seats next month, Majority Leader Mitch McConnell would almost surely prevent the president-elect from filling it.”

Susan Glasser: “I know we’ve got used to thinking of Trump as a genius in turning bad news on its head, in creating grievance out of setbacks and then using those grievances to further cement his hold over his Party. I’ve watched him run this play over and over again. I get it. But the alternate way of looking at his post-election behavior is that he is cementing his reputation as the sorest of sore losers.”

“Not only that, but he is crying so long and loudly about the unfairness of his loss that he is forcing officials at every level of government, across the country, to take sides—against him. His frenetic efforts to deny his defeat have simply underscored it. Trump really is leaving office on January 20th, and he really will go out as an impeached and defeated President, forevermore listed in the history books alongside Herbert Hoover and Jimmy Carter and all the other one-termers he disdains. He is now, and will always be, a loser.”

“As President Trump remains defiant, refusing to publicly acknowledge that he lost the Nov. 3 election, all signs around the White House point to a four-year whirlwind coming to an end,” the Washington Post reports.

“Aides are quietly lining up next jobs, friends are wrangling last-minute favors and Cabinet secretaries are giving exit interviews. These behind-the-scenes preparations underscore the reality that while Trump may continue to tilt at the windmills, his tenure as the president of the United States is ending.”

“Advisers have begun reviewing pitches for post-presidency books, deciding which deserve cooperation and which should be shunned.”

“Top economic adviser Larry Kudlow has told friends he is planning to return to broadcasting, and he has his next gigs lined up,” the New York Times reports.

As he begins his final weeks in office, President Trump “has mentioned to confidants that he’s thinking about resurrecting The Apprentice or The Celebrity Apprentice reality TV show,” the Daily Beast reports.

“Among his inner orbit of family, political aides, and advisers, it is yet another sign that, despite the president’s public insistence that he won the 2020 election, he recognizes that he has lost and that his ongoing legal crusade to cancel Joe Biden’s victory will come up short.”

“Biden last week named Katherine Tai, a trade lawyer, as his choice for the U.S. trade representative — a critical Cabinet-level position tasked with enforcing U.S. import rules as well as negotiate trading terms with China and other countries.”

Said Willems: “Katherine Tai is an excellent choice for USTR and the right person for the moment.”

Rep. Ken Buck (R-CO) told Fox Business he will not be taking the coronavirus vaccine, explaining that he is “more concerned about the safety of the vaccine” than the “side effects of the disease.”

Said Buck: “It is my choice. I’m an American and I have the freedom to decide if I’m going to take a vaccine or not and, in this case, I’m not going to take the vaccine.”

Rep. Dusty Johnson (R-SD) has set up a poll to asked his constituents when he should gets vaccinated against COVID-19, the Sioux Falls Argus Leader reports.

This is worth watching: After a legal threat from Smartmatic, Lou Dobbs ran a stunning point-by-point fact check debunking claims made about the company by himself and his guests.