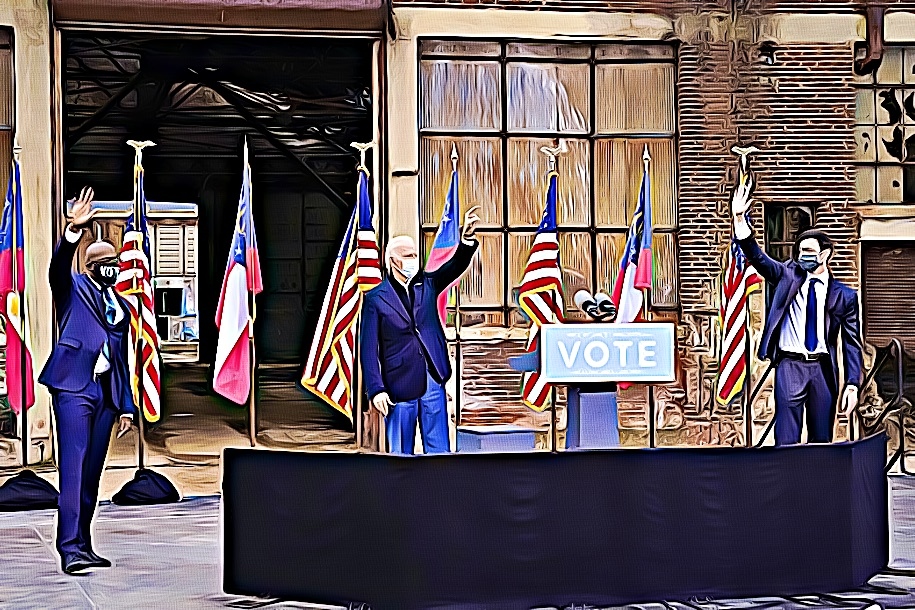 Republican Secretary of State Brad Raffensperger absolutely torched GOP Sens. David Perdue and Kelly Loeffler on Tuesday for demanding voter registration data they already have, snarking in an official press release that they should “call their campaign offices” to remedy their “embarrassing” blunder. It’s hard to excerpt just part of the smackdown, but enjoy this:

“Though I’ve told the Republican Party to stop focusing on me and instead direct their energies to winning the Senate runoffs, clearly they haven’t listened,” said Secretary Raffensperger. “As embarrassing as it is for Sens. Perdue and Loeffler not to know that the data they want is already publicly available from the Secretary of State, it’s even worse that they’re not aware their own campaigns already have the data they’re looking for. Early voting has already started but it’s not too late for them to call their offices and get their campaigns in order.”

Politico: “Trump’s last gasp to overturn the Nov. 3 election results will come on Jan. 6, when the House and Senate are scheduled to gather in a joint session to certify Biden’s win in the Electoral College. A handful of GOP House members have said that they will challenge Biden’s victory, though they are unlikely to succeed.”

“House Democrats unsuccessfully challenged election results in the recent past — including in 2001 and 2017, after candidates won the popular vote but lost the Electoral College.”

“So basically McConnell is telling his caucus not to let the crazies in the House to make a circus of the electoral vote counting on January 6.”

Virginia state Sen. Amanda Chase (R), who is running for governor, called on President Trump to declare martial law to keep Joe Biden from being sworn in as the next president, The Hill reports.

Said Chase: “Fair elections we can accept but cheating to win; never. It’s not over yet. So thankful President Trump has a backbone and refuses to concede. President Trump should declare martial law as recommended by General Flynn.”

Among just Trump voters, 19% say they are less likely to vote in the next election.

Such demoralization among Republicans definitely could affect the Georgia Senate Runoffs. Although the Republican candidates are slight favorites in these races, the polling averages currently give a slight edge to the Democrats.

Georgia voters shattered records on the first day of early voting ahead of the run off Senate races next month, according to Nate Cohn.

“President Trump couldn’t make it any clearer: He needs his supporters to fork over cash for the all-important Georgia Senate runoff elections,” Politico reports.

“There’s just one hitch: Trump’s new political machine is pocketing most of the dough — and the campaigns of the Georgia senators competing in the Jan. 5 races aren’t getting a cent. Trump’s aggressive fundraising blitz appears to be devoted to helping the party defend Georgia’s two Senate seats and, with them, the Senate majority. But the fine print shows that most of the proceeds are going toward Trump’s newly launched PAC, which he plans to use to fund his future political activities. Only a fraction is going to the Republican National Committee, which is investing $20 million into the runoffs.”

Politico: “The success of the president-elect’s agenda hinges on the two Senate runoff races that will decide the balance of power in the chamber. If Ossoff and Warnock fail to defeat Republican Sens. David Perdue and Kelly Loeffler on Jan. 5, it will mean a GOP-controlled Senate that’s guaranteed to stand in the way of implementing Biden’s policy goals.”

“Then there’s the matter of appearance. While Biden risks expending precious political capital even before taking the oath of office, if he plays it safe and declines to go to a state he narrowly won — especially after President Donald Trump and a bevy of Republicans have campaigned there — it will send an early message of caution and timidity. And it would signal to Georgia Democrats that the uphill contests were too far out of reach.”

Georgia’s two Republicans senators are still refusing to acknowledge Joe Biden as president-elect a day after Electoral College voters met to cast their ballots and officially name him the winner over President Trump, The Hill reports.

One day after the Electoral College affirmed Joe Biden’s presidential victory, Sen. Ron Johnson (R-WI) told the Milwaukee Journal Sentinel that he acknowledged Biden as the president-elect and believed the election was legitimate.

But he added he will still hold a Senate hearing Wednesday on election “irregularities,” saying there are “legitimate questions” about the way the election was administrated in Wisconsin and other states.

“Ron Johnson is linking himself to President Donald Trump’s election challenge as tightly as possible as he decides whether to run for reelection to a must-win Senate seat for Republicans,” Politico reports.

“Johnson, a steadfast Trump ally who has endeared himself to the president with his various investigative pursuits, is defending his approach, even as he faces a possible reelection campaign in a state that President-elect Joe Biden won in November. And Democrats are taking notice.”

An Arizona judge jettisoned a lawsuit claiming widespread election fraud in the state, saying the plaintiff had no standing to challenge the state’s election results because she was not even registered to vote, the Arizona Republic reports.

Politico reports that former Massachusetts state Rep. Geoff Diehl, who was Team Red’s 2018 Senate nominee, is considering a primary challenge to Republican Gov. Charlie Baker. Diehl very much did not rule it out when asked, saying instead, “You know, you never say never to anything.” Baker himself has not yet announced his 2022 plans, though he’s been laying the groundwork for a potential campaign for a while.

Diehl, who lost to Democratic Sen. Elizabeth Warren 60-36, is an ardent Trump ally, while Baker refused to support Trump in either 2016 or 2020. However, while Diehl would again struggle in a general election in this very blue state, he might have an opening in a primary with Baker: A recent MassInc poll for the nonprofit The Barr Foundation gave Baker only a 54-40 favorable rating with his fellow Republicans compared to an 81-13 score with Democrats.

Greenbelt Mayor Colin Byrd announced this week that he would challenge 21-term Rep. Steny Hoyer in next year’s Democratic primary. Byrd expressed support for left-wing priorities like Medicare for All and said that Hoyer, who is white, “can no longer represent adequately more diverse places like Prince George’s County and Charles County,” both of which have large African American populations (Byrd is Black).

Last year, Byrd ousted the incumbent mayor of Greenbelt, a city of 23,000 in the D.C. suburbs, at the age of 27, becoming the youngest mayor in the city’s history. Hoyer, now 81, is the second-ranking House Democrat and has drawn primary challenges in six of the last seven election cycles. While none have come close to unseating him, his 64-27 win over activist McKayla Wilkes was the weakest of his career since he first won office in a 1981 special election.

Former state Sen. Nina Turner, who’d reportedly been considering a bid to succeed Rep. Marcia Fudge and had filed paperwork with the FEC, made her campaign official on Tuesday. Turner is one of several Democrats planning to run in a special election for Ohio’s safely blue 11th District should Fudge get confirmed as Joe Biden’s new secretary of Housing and Urban Development.

Turner began her political career by winning a seat on the Cleveland City Council in 2005 and was appointed to the state Senate in 2008 to fill a vacancy. She won election in her own right in 2010 but then badly lost a race for secretary of state during the 2014 GOP wave. She later became a vocal surrogate for Bernie Sanders in 2015 after switching her allegiance from Hillary Clinton and considered an offer by the Green Party presidential candidate to serve as her running-mate the following year before turning it down.