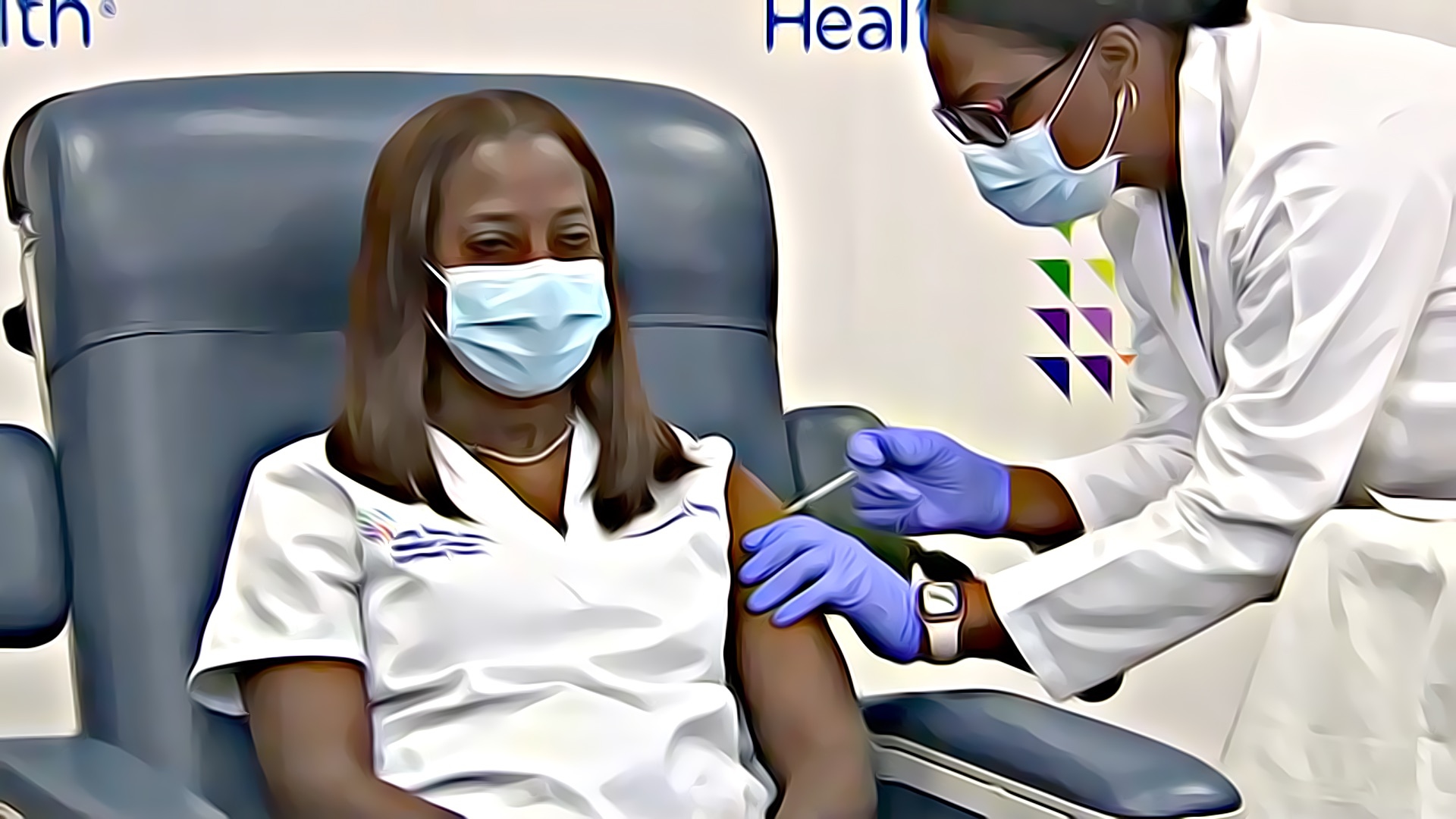 Said Lindsay: “I would like to thank all the frontline workers, all my colleagues who have been doing a yeoman’s job despite this pandemic all over the world.”

She added: “I feel hopeful today, relieved. I hope this marks the beginning to the end of a very painful time in our history. I want to instill public confidence that the vaccine is safe. We’re in a pandemic, so we all need to do our parts.”

The Atlantic: How science beat the virus.

“The number of people with the coronavirus in the United States known to have died of passed 300,000 on Monday, another wrenching record that comes less than four weeks after the nation’s virus deaths reached a quarter-million,” the New York Times reports.

Former FDA Commissioner Dr. Scott Gottlieb, now on the board of Pfizer, told CNBC that the United States was offered more of the company’s successful coronavirus vaccine as recently as November — but didn’t take the deal.

“President Trump said on Monday that Attorney General William Barr would depart next week, ending a tenure marked by Mr. Barr’s willingness to advance the president’s political agenda and criticism that he eroded the post-Watergate independence of the Justice Department,” the New York Times reports.

“Mr. Barr had in recent weeks fallen out of favor with the president after acknowledging that the department had found no widespread voter fraud, but Mr. Trump sought to play down their differences, saying in a tweetannouncing Mr. Barr’s departure, ‘Our relationship has been a very good one, he has done an outstanding job!’”

“The Department of Homeland Security is the third federal agency to have fallen victim to a major cyberespionage campaign by the Russian government, joining the Treasury and Commerce departments as targets that have been compromised,” the Washington Post reports.

“The fact that the department charged with safeguarding the country from physical and cyber attack was victimized underscores the campaign’s significance and calls into question the adequacy of federal cybersecurity efforts.”

“The Department of Homeland Security, the State Department and the National Institutes of Health on Monday joined the list of known victims of a months-long, highly sophisticated digital spying operation by Russia whose damage remains uncertain but is presumed to be extensive,” the Washington Post reports.

Politico: “Nearly a dozen centrist senators will present their much-anticipated product on Monday afternoon in two pieces: a $748 billion package boosting funds for education, vaccine distribution, transportation and other areas, and a $160 billion add-on of state and local aid coupled with a short-term liability shield for employers.”

“A $908 billion bipartisan COVID-19 relief plan set to be introduced in the U.S. Congress as early as Monday will be split into two packages in a bid to win approval,” Reuters reports. “One will be a $748 billion measure, which contains money for small businesses, the jobless and COVID-19 vaccine distribution. The other will include some key sticking points: liability protections for business and $160 billion for state and local governments.”

“Democratic leaders are now confronting a crucial decision: Whether to abandon aid for states and cities in order to get a slimmed-down Covid-19 relief deal or whether to make a last-ditch attempt for a bigger plan even if it risks an accord in the final days of the 116th Congress,” CNN reports.

“The decision isn’t an easy one for Democrats who rejected bigger proposals before the elections as they pushed for their own massive plan.”

“Congressional negotiators are closing in on a $1.4 trillion omnibus spending deal to ward off a government shutdown on Friday at midnight, crossing one major priority off the legislative agenda and adding further urgency around the inclusion of coronavirus aid in a year-end package,” Politico reports.

Senior Capitol Hill sources tell Playbook that the leadership hopes to file the omnibus spending bill by Tuesday. Omnibus means that the funding bill will keep government open through September 2021. “Strategic benefit: Government spending is on autopilot through next fall, and President-elect Joe Biden doesn’t have to deal with a funding fight.” “Downside: No hard deadline for more Covid relief in the first half of 2021.”

“Mr. Barr and senior department officials relayed the instructions in conversations with prosecutors, questioning whether their staff members could be trusted and warning against issuing subpoenas or taking other steps that might become public… In siding with department practice, colleagues and legal observers said Mr. Barr bucked critics on the left and right who have accused him of being too accommodating to Mr. Trump.”

“A White House official who fell ill with Covid-19 in September is recovering after three months in the hospital, though he lost his right foot and lower leg in his battle against the virus,” Bloomberg reports.

“He’s the highest-profile candidate to join the early jockeying for the post, and already enjoys backing from prominent figures including a former drug czar, former surgeon general, and the former director of the National Institute of Mental Health.”

“Now Mr. Biden’s team is scrambling to find someone else, according to several people who have spoken with the presidential transition team. The chief reason: This month, a group of more than 70 environmental justice groups wrote to the Biden transition charging that Ms. Nichols has a ‘bleak track record in addressing environmental racism.’”

“President Trump said on Sunday night that he would delay a plan for senior White House staff members to receive the coronavirus vaccine in the coming days,” the New York Times reports.

“The shift came just hours after The New York Times reported that the administration was rapidly planning to distribute the vaccine to its staff at a time when the first doses are generally being reserved for high-risk health care workers.”

New York City mayor Bill de Blasio (R) said New Yorkers should prepare for the possibility of a “full shutdown,” warning that December and January will be particularly difficult months in the city’s fight against coronavirus.

Said De Blasio: “We need to recognize that that may be coming and we’ve got to get ready for that now, because we cannot let this virus keep growing.”

Politico: “President-elect Joe Biden’s decision to nominate a recently retired military general as Defense secretary blindsided the lawmakers who will have to pass a waiver to allow for his confirmation. His choice of a former White House chief of staff as secretary of Veterans Affairs rankled war veterans who expected one of their own to lead the agency. Neera Tanden, Biden’s pick for OMB director, hacked off allies of Bernie Sanders.”

“And the news that Biden would not be selecting the Latina governor of New Mexico to lead the Department of Health and Human Services — a step that came after she fell out of favor with the transition team for rejecting another position — prompted backlash from members of the Congressional Hispanic Caucus, which criticized Biden’s allies for leaking the details. The bumpiness of some of the rollouts of Biden’s Cabinet picks is a new phenomenon for a presidential campaign defined by its lack of leaks and drama.”

“Pete Buttigieg is emerging as a leading contender to be Joe Biden’s Transportation secretary,” CNN reports.

“The possible nomination would vault the 2020 Democratic presidential candidate into the federal government, getting the former South Bend, Indiana, mayor what many Democrats see as needed experience should he want to run for president again.”

“Joe Biden is considering Samantha Power to head the United States Agency for International Development, which would place a high-profile figure atop foreign aid and coronavirus relief efforts,” Axios reports.

“Installing Power — a former U.S. ambassador to the United Nations and author of a Pulitzer Prize-winning book about genocide — would signal the Biden administration plans to revitalize foreign assistance and use it as an instrument of soft power and to achieve humanitarian goals.”

“Following years of protests from fans and Native American groups, the Cleveland Indians have decided to change their team name, moving away from a moniker that has long been criticized as racist,” the New York Times reports.