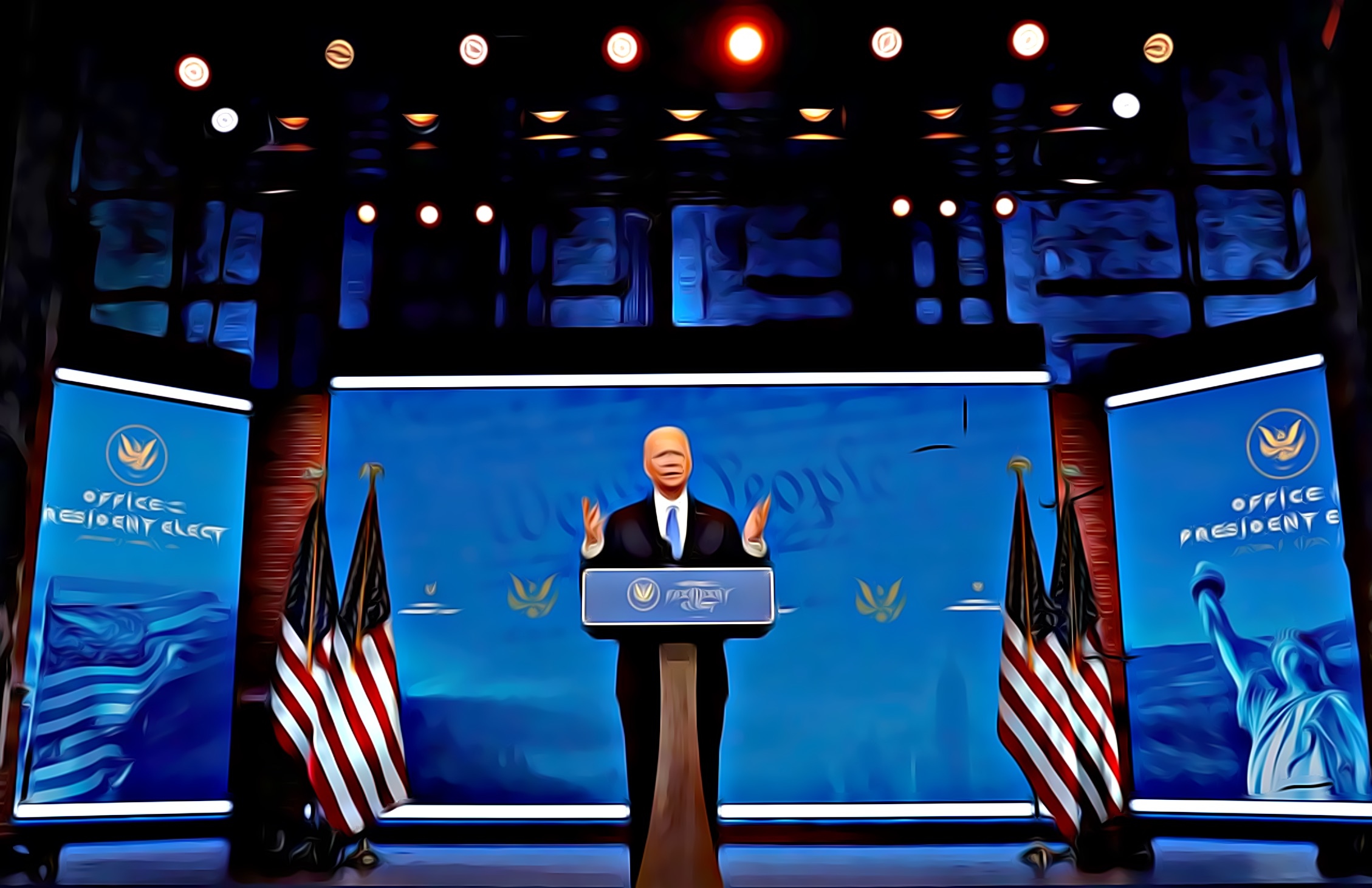 By casting their electoral votes, California’s electors pushed Joe Biden’s tally to 302 — well above the 270 needed to win.

The final four electoral votes will be cast for Biden later tonight by Hawaii’s electors. Congress will meet on January 6 in a joint session to formally accept the results.

“Electoral College members in all six battleground states where President Trump most fiercely contested the results cast their ballots for Democrat Joe Biden on Monday, effectively cutting off the president’s path to overturning the election,” Bloomberg reports.

“The vote marks the watershed moment some Republican lawmakers have said would signal the end of their support for attempts to overturn the Nov. 3 election.”

“I believe we should abolish the Electoral College and select our president by the winner of the popular vote, same as every other office. But while it still exists, I was proud to cast my vote in New York for Joe Biden and Kamala Harris.” — Hillary Clinton, on Twitter. Bill and Hillary Clinton were Electors in New York State.

“Senate Republicans are finally starting to recognize Joe Biden as the next president of the United States — even if they waited until the very last minute,” Politico reports.

“When asked on Monday afternoon whether Biden was the president-elect, some GOP senators paused and asked how far along the Electoral College count was taking place that day. Others declined to comment until results were officially certified and until Biden climbed past the necessary 270 votes.”

“But as the day went on and the Electoral College’s verdict was made clear, an increasing number of Republican senators — though certainly not all — began to say what the leader of their party won’t and what they declined to acknowledge for weeks: Biden will take office in January.”

New York Times: “Nearly all of the people interviewed said they believed at least some fraud had been perpetrated, but whether that added up to Mr. Trump’s being the true winner was much harder to know. The reasons for doubting the outcome were many. Misinformation played a role. So did signaling by Republican leaders, first among them Mr. Trump…”

“What happens next is a critical question for American democracy. What will become of the belief that the 2020 presidential election was in some way illegitimate? Will it melt away along with Mr. Trump’s prospects for winning, and vanish completely when Mr. Biden is inaugurated? Or will it fester, nursed by Republicans in power, and metastasize into something that could be a rallying cry for nationalists for years to come?”

White House adviser Stephen Miller told Fox & Friends that today’s meeting of the Electoral College is a mere formality and that Congress will ultimately declare Donald Trump the winner of the presidential election.

The Wisconsin Supreme Court upheld Joe Biden’s win in the presidential race, handing Donald Trump a defeat less than an hour before the Electoral College was to meet, the Milwaukee Journal Sentinel reports.

“The 4-3 ruling was the latest in a string of dozens of losses for the president across the country as Republicans pursue last-gasp efforts to give Trump a second term.”

When asked if he could assure listeners that no one would get hurt, Eisen replied: “No. I don’t know. Because what we’re doing today is uncharted.”

“Michigan Republican legislative leaders pulled a GOP lawmaker from his committee assignments Monday after the lawmaker hinted he was part of a group that sought to disrupt or otherwise undermine the Electoral College vote slated to happen at the Capitol this afternoon,” the Detroit Free Press reports.

So what was the event? I guess it was this:

“I can’t fathom risking our norms, traditions and institutions to pass a resolution retroactively changing the electors for Trump, simply because some think there may have been enough widespread fraud to give him the win… I fear we’d lose our country forever.”  — Michigan House Speaker Lee Chatfield (R), quoted by Fox 17.

Paul Campos: “The formalist answer would be that all these lawsuits were just an enormous pile of crap in terms of even the most basic legal rules, and that calling balls and strikes is easy when the pitcher throws the ball straight into the ground rather than tossing it at least somewhere in the general vicinity of the plate.”

“The realist answer is that at least some of these various state and federal judges who as a political matter very much wanted Trump to win the election still realized that these lawsuits were so preposterous on formal grounds that giving Trump any sort of even partial rhetorical victory (‘this litigation raises serious questions about the procedures used’ blah blah blah) would do far more damage to the institutional capital of the courts than it would help the long term goals of the American right wing.”

Jonathan Bernstein: “What I find interesting is that if this is correct — that these judges are acting to advance their political goals — the key is that their political program remains the substantive legal agenda they’ve had for some time. In this respect, Republican judges differ from many Republican legislators, who have increasingly become indifferent to public policy at all.”

“California Gov. Gavin Newsom has had a rough year. The next one might be even tougher as a recall effort appears to be gaining momentum, fueled partly by outrage over the first-term Democrat dining with friends at an opulent restaurant while telling state residents to spurn social gatherings and stay home,” the AP reports.

Rep. Paul Mitchell (R-MI) told CNN that his disgust and disappointment with President Trump’s efforts to overturn the results of the election have led him to request that the Clerk of the House change his party affiliation to “independent,” and to notify GOP leaders in a letter that he is withdrawing his “engagement and association with the Republican Party at both the national and state level.”

Mitchell is retiring at the end of this session of Congress.

Election technology company Smartmatic announced that it is “issuing legal notices and retraction demand letters to Fox News, Newsmax and One America News Network for publishing false and defamatory statements.”

“In another sign of the lingering unrest over President Trump’s election loss, an Arizona group sent the National Archives in Washington, D.C., notarized documents last week intended to deliver, wrongly, the state’s 11 electoral votes for him,” the Arizona Republic reports.

“The 11 electors actually chosen by Arizona voters last month — meeting in an unpublicized location because of security concerns over their task — cast their votes Monday for President-elect Joe Biden and Vice President-elect Kamala Harris, formalizing the Democrats’ victory nationally and in the state.”