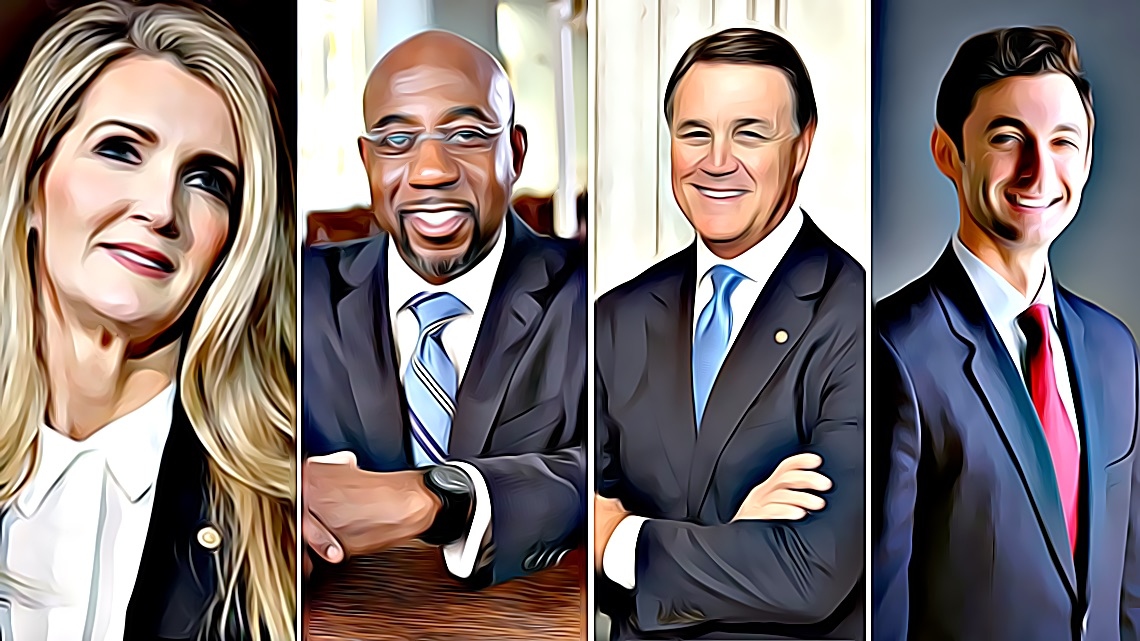 “All eyes are on Georgia as the state begins early voting on Monday for two Senate runoff elections that will determine control of the US Senate,” CNN reports.

“But there will be fewer early voting sites available in some parts of the state than there were for the November general elections, which has upset voting rights and advocacy groups in the state who say the changes will lead to longer lines, longer wait times and more barriers — especially for voters of color.”

At a rally in Washington DC Saturday, Trump supporters vented their anger at Republican party officials who’ve refused to take part in President Trump’s bid to subvert the election, Business Insider reports. “Destroy the GOP,” some chanted at the event, according to video footage posted online.

Washington Post: “Nearly three dozen people were arrested during a night of unrest in downtown Washington that began Saturday with rallies supporting President Trump and descended into chaos and violence as a group with ties to white nationalism roamed the streets looking to fight.”

Despite there being no viable legal pathway for President Trump to overturn the election results, a new Morning Consult poll finds that 45% of voters who “strongly approve” of the president’s job performance also believe the election results will be overturned, including 29% who say that outcome is “very likely.”

And despite no evidence of widespread fraud emerging, just 29% of Republican voters say the election was free and fair.

“Presidential electors are meeting across the United States on Monday to formally choose Joe Biden as the nation’s next president,” the AP reports.

“Monday is the day set by law for the meeting of the Electoral College. In reality, electors meet in all 50 states and the District of Columbia to cast their ballots. The results will be sent to Washington and tallied in a Jan. 6 joint session of Congress over which Vice President Mike Pence will preside.”

Citing “safety and security concerns,” the Michigan House and Senate will close their offices in downtown Lansing on Monday as presidential electors meet in the state Capitol, the Detroit News reports.

Politico: “The president has spent days calling a dozen or more allies to ask what they think he needs to do over the next two years to ‘stay part of the conversation,’ according to two people, including one who spoke to the president. And while Trump has told allies he plans to run for president again, he has also indicated he could back out in two years if he determines he’ll have a tough time winning, said three people familiar with the discussions.”

“Essentially, at this point, Trump appears just as interested in people talking about a Trump 2024 campaign as he is in actually launching a real campaign, even if he may ultimately turn his flirtation into a serious bid, according to interviews with 11 Republicans who worked for Trump or helped in his two races.”

The Wall Street Journal called on President Trump to concede the election in an editorial. However, the editorial acknowledged that Trump “rarely takes our advice,” while adding that “bitterness as a political strategy rarely wears well.”

The editorial went on to predict that Trump’s refusal to concede could lead to Republican losses in the Jan. 5 Georgia Senate Runoffs and even violence.

Washington Post: “The strain between the two Republicans has now boiled over into a full-blown feud in the aftermath of Trump’s 2020 electoral defeat, as the president has fixated on his loss in Georgia as a humiliation that he blames in large part on Kemp. Trump lost the solidly Republican state by approximately 12,000 votes and is furious with Kemp for not heeding his calls to question the integrity of the state’s election results.”

“In phone calls and conversations with allies and advisers, Trump has griped that Kemp was not pushing Georgia Secretary of State Brad Raffensperger to do more to reverse President-elect Joe Biden’s victory; that Kemp was not defending the president on television; and, perhaps most indefensible in Trump’s mind, that Kemp moved forward with certifying the results of the election.”

Sen. Bill Cassidy (R-LA) acknowledged on Sunday that Joe Biden won the Nov. 3 presidential election and urged the Republican Party to unify as the Electoral College votes Monday on the election, Politico reports.

Said Cassidy: “As Abraham Lincoln said, a house divided against itself cannot stand. Our nation, our conservative movement, our Republican Party can’t stand if we are divided against ourselves. So, at some point, we have to come together for all those reasons.”

A new CBS News poll finds 62% of Americans believe that the election is “over and settled” and that it is “time to move on” to other issues. That majority stands in stark contrast to the 82% of Trump supporters polled who do not see President-elect Joe Biden as the legitimate victor.

A new Fox News poll finds 52% of American voters said that they believe President Trump is weakening American democracy as he presses forward with lawsuits challenging the election results.

Karl Rove told Fox News Sunday that President Trump is starting to look like a “sore loser.” Said Rove: “If his goal is to lay the predicate to come back in 2024 and run again, he’s helping himself at least gaining the nomination, but I think in the long run he’s not helping himself or the country.”

He added: “America likes comebacks, but they don’t like sore losers, and he is on the edge of looking like a sore loser, and probably will look like it after January 6th.”

President Trump refused to rule out the possibility of skipping his successor’s inauguration in January during an interview on Fox News.  Said Trump: “I don’t want to talk about that.”

“Rep. Max Rose, the brash Staten Island Democrat who recently lost his re-election race, appears all but certain to run for mayor of New York City, confirming for the first time that he is exploring a bid and casting his potential candidacy as a sharp rebuke of the de Blasio administration,” the New York Times reports.

“Mr. Rose’s entry into the race at a moment of extraordinary crisis for New York would test whether a relatively moderate Democrat could catch fire in a crowded field that may be defined by debates over both ideology and matters of competence.”

“President Trump lost key swing states by clear margins. His barrage of lawsuits claiming widespread voting fraud has been almost universally dismissed, most recently by the Supreme Court. And on Monday, the Electoral College will formally cast a majority of its votes for President-elect Joe Biden,” the New York Times reports.

“But as the president continues to refuse to concede, a small group of his most loyal backers in Congress are plotting a final-stage challenge on the floor of the House of Representatives in early January to try to reverse Mr. Biden’s victory.”

“Constitutional scholars and even members of the president’s own party say the effort is all but certain to fail. But the looming battle on Jan. 6 is likely to culminate in a messy and deeply divisive spectacle that could thrust Vice President Mike Pence into the excruciating position of having to declare once and for all that Mr. Trump has indeed lost the election.”

“After shocking many in the evangelical movement by endorsing Donald Trump over other Republicans for the 2016 presidential nomination, Liberty University President Jerry Falwell Jr. pumped millions of the nonprofit religious institution’s funds into Republican causes and efforts to promote the Trump administration, blurring the lines between education and politics,” Politico reports.

“The culmination of his efforts was the creation of a university-funded campus ‘think tank’ — which has produced no peer-reviewed academic work and bears little relation to study centers at other universities — that ran pro-Trump ads, hired Trump allies including former adviser Sebastian Gorka and current Trump attorney Jenna Ellis to serve as fellows and, in recent weeks, has aggressively promoted Trump’s baseless claims of election fraud.”