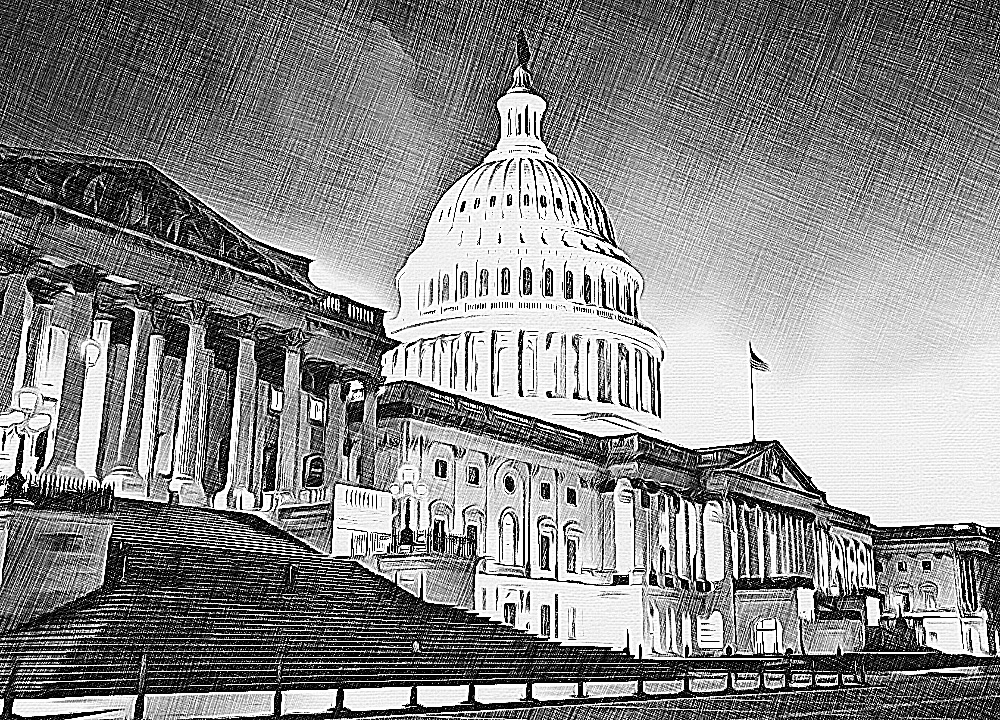 Playbook: “This presidency has been filled with hard-to-believe split screens, but we’re seeing perhaps the starkest display of dissonance yet. Congress has been working around the clock to cut a series of end-of-year deals, and President Trump is on an unending tear of falsehoods, suggesting that he is the rightful winner of the election, which, of course, he’s not. He’s losing support — Republicans are sick of the gripes, the Supreme Court is summarily dismissing his arguments, and the nation’s governing apparatus is preparing for JOE BIDEN’S presidency.”

“Congress, meanwhile, has spent this week and will spend next week trying to put in place a series of policies to help America bounce back from the coronavirus. It avoided a government shutdown, with the intent of giving itself more time to cut a bipartisan deal. Yet Trump has been absent — a bit player in a government he’s meant to be steering and a country he’s meant to be leading.”

President Trump on Friday signed a continuing resolution to fund the government through Dec. 18, temporarily averting a shutdown after the Senate passed the bill earlier the same day, Axios reports.

“The Supreme Court repudiation of President Trump’s desperate bid for a second term not only shredded his effort to overturn the will of voters: It also was a blunt rebuke to Republican leaders in Congress and the states who were willing to damage American democracy by embracing a partisan power grab over a free and fair election,” the New York Timesreports.

“The court’s decision on Friday night, an inflection point after weeks of legal flailing by Mr. Trump and ahead of the Electoral College vote for President-elect Joseph R. Biden Jr. on Monday, leaves the president’s party in an extraordinary position. Through their explicit endorsements or complicity of silence, much of the G.O.P. leadership now shares responsibility for the quixotic attempt to ignore the nation’s founding principles and engineer a different verdict from the one voters cast on Election Day.”

President Trump blasted the Supreme Court’s decision to reject his bid to overturn the election results in Texas, calling it a “disgraceful miscarriage of justice.” Said Trump: “The people of the United States were cheated, and our Country disgraced. Never even given our day in Court!” In his Saturday morning tweet storm, Trump also retweeted a post that called for Attorney General Bill Barr to be fired, adding his own comment: “A big disappointment!”

Washington Post: Trump’s spin on his Supreme Court failure is as bad as his legal case.

“President-elect Joe Biden’s team is feverishly working to get a messaging plan in place to sell a skeptical public on the first FDA-backed coronavirus vaccine, believing the Trump administration has set the effort back significantly,” Politico reports.

“Biden implied on Friday that he’s not going to wait until he takes office to start counteracting Trump’s mixed messaging on the vaccine, which includes downplaying the public health threat of the coronavirus while hailing the unprecedented speed at which a shot was developed.”

“Pfizer’s coronavirus vaccine, which was authorized for emergency use on Friday night, is expected to arrive throughout the U.S. by Monday to administer to health care workers,” Axios reports.

“The administration green-lighting shipments and distribution this weekend comes as the U.S. topped more than 3,000 deaths a day — more than 9/11 or D-Day.”

“We disagree on many issues and that is ok in our view. Btw, we don’t look down on waitresses. We admire them. We are all the types of guys who always tip at 50% or more.”

“I have an idea. Let’s approach each other and our points of view with good faith. We say the following with respect and seriousness Ma’am. Our hand is open and we need to work together or we are going to lose America. The fight will last for many years.”

“Here is the unexpected part. A democratic-socialist and former waitress who knows what it is to actually work combined with the Lincoln Project and many others is going to hold the line together. We will not yield and we will never break. We are the side opposed to autocracy.”

Sen. Mike Lee (R-UT) blocked consideration for legislation to establish a National Museum of the American Latino and an American Women’s History Museum as part of the Smithsonian Institution, reasoning that the US does not need “separate but equal museums,” CNN reports.

CNN: “While the President is busy figuring out a way to stay in the White House, the first lady is determining what to put in storage, what goes to Trump’s New York City digs, and what should be tagged for shipment to Mar-a-Lago in Palm Beach, Florida.”

Said one source: “She just wants to go home.”

Asked how the first lady feels about rumors her husband might announce a 2024 bid, the source added: “That might not go over well.”

“After Joe Biden is sworn in as president on Jan. 20, 2021, Donald Trump’s 11-year, anti-establishment, conspiracy-fueled salvos on Twitter could come to a screeching halt for repeatedly violating the platform’s content rules,” Adweek reports.

“Twitter, which has committed to more stringent rules against peddling misinformation this year, like labeling rule-breaking tweets, has repeatedly slapped Trump on the wrist for his behavior. But unlike normal platform abusers, the company has refused to banish Trump outright because, well, he’s the president. Twitter’s ‘World Leaders’ policy was codified last year and treats some rule-breaking tweets as newsworthy. But that designation will no longer protect Trump once he’s a former president.”

“Twitter on Saturday prevented users from liking and replying to a series of tweets from President Trump in which he repeated false claims that he won the election and that the race was ‘stolen’ from him,” The Hill reports.

House Majority Whip James Clyburn (D-SC), who chairs the inaugural committee for President-elect Joe Biden, told NBC News that most of the events Jan. 20 will take place virtually because of the pandemic.

Said Clyburn: “We will be setting an example with this inauguration. It is going to be, I may call it, hybrid. He will take the oath in the traditional way, but all of the inaugural festivities are going to be 80 percent virtual.”

A new study finds that members of Congress who own stock tend to vote in ways that benefit their investments and that these decisions can’t be explained away by other factors, such as ideology or constituent interests.

“The Veterans Affairs inspector general informed federal prosecutors this fall of possible criminal conduct by Secretary Robert Wilkie stemming from an investigation into whether he worked to discredit a congressional aide who said she was sexually assaulted,” the Washington Post reports.

“The Justice Department has not pursued a case against Wilkie, a former senior Pentagon official who has served since 2018 as President Trump’s second veterans chief.”

“The U.S. military flew two B-52H bombers from Louisiana to the Middle East Thursday, part of an ongoing effort to deter Iran from any aggressive actions,” NBC News reports.

“The bomber mission, which flew through the region but did not drop any bombs, comes as the U.S. military assesses there is a heightened chance for Iranian actions or miscalculations.”

“An Associated Press investigation has identified at least six sexual misconduct allegations involving senior FBI officials over the past five years, including two new claims brought this week by women who say they were sexually assaulted by ranking agents.”