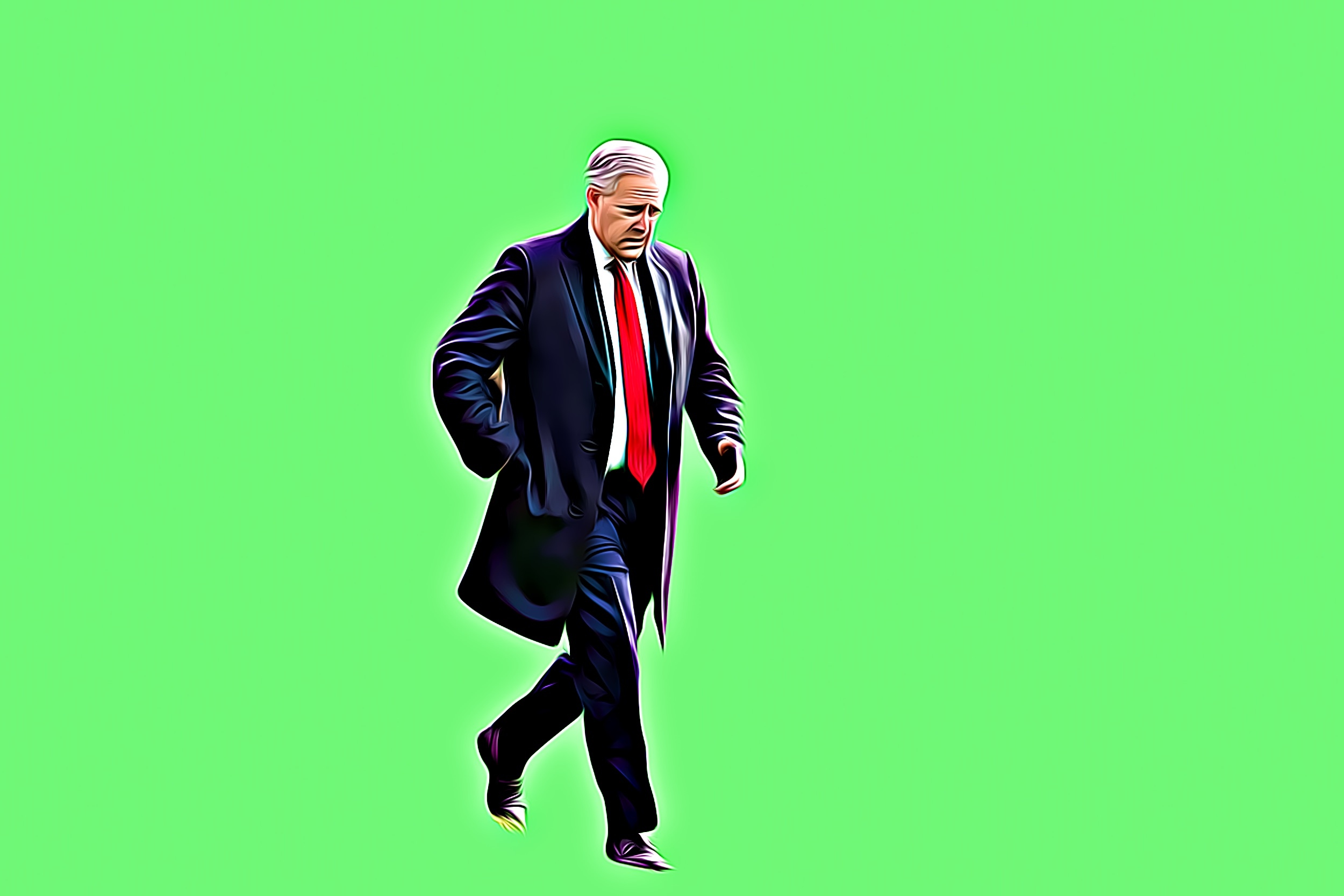 “The Food and Drug Administration is accelerating the timeline for issuing an emergency authorization for Pfizer’s Covid-19 vaccine, aiming to issue it by Friday evening after planning as recently as Thursday night to finalize the move on Saturday,” the New York Times reports. This was reported on Thursday evening.

On Friday, the White House decided that it wanted to look tough, so “White House Chief of Staff Mark Meadows […] told Stephen Hahn, the commissioner of the Food and Drug Administration, to submit his resignation if the agency does not clear the nation’s first coronavirus vaccine by day’s end,” the Washington Post reports.

You see, Marky, if you and your petulant man child of a boss wanted the story to be that you forced the FDA to approve the vaccine, which they were going to do anyway, it would have been best to leak this story on Wednesday or Thursday morning. Now you all look pathetic.

“The Senate passed a $741 billion defense authorization bill on Friday, sending it to President Trump with veto-proof majorities in both chambers of Congress and effectively daring him to make good on his threat to scuttle the legislation,” the Washington Post reports.

Axios: “Overriding Trump’s veto would serve as a rare Republican rebuke to the president in his last weeks in office.”

“Some of President Trump’s advisers are trying to convince him that if he vetoes a defense reauthorization bill that could pass Friday, his fellow Republicans won’t sustain it and he’ll risk losing credibility with the troops,” Axios reports.

“In private conversations, Trump seems to believe Republicans would ultimately bend to his will and support a veto. He argues the bill needs a provision repealing protections for social media companies, but several confidants have tried to persuade him his fellow Republicans don’t agree.”

“Congressional leaders are making a last-ditch attempt to cobble together a stimulus deal before Congress adjourns for the year, hoping to quickly reach agreement on a relief package that’s eluded them for months,” Politico reports.

“Committee leaders in both chambers have begun negotiating noncontroversial aspects of the relief package, including small business funding, according to three senior aides familiar with the talks. Democrats insist this effort is in concert with the bipartisan Senate push to reach a deal and not in lieu of their proposal. Top Republicans, though, are much more pessimistic on the bipartisan group reaching consensus on the major remaining sticking points.”

Playbook: “The 116th Congress started with a government shutdown, and it’s ending with the institution completely paralyzed by its efforts to put in place policies to help Americans rebound from the coronavirus. The same set of policies have been bedeviling the leadership — self-described dealmakers all — for more than six months.”

New York Times: “State prosecutors in Manhattan have interviewed several employees of President Trump’s bank and insurance broker in recent weeks, according to people with knowledge of the matter, significantly escalating an investigation into the president that he is powerless to stop.”

“The interviews with people who work for the lender, Deutsche Bank, and the insurance brokerage, Aon, are the latest indication that once Mr. Trump leaves office, he still faces the potential threat of criminal charges that would be beyond the reach of federal pardons.”

“Attorney General William P. Barr has told others he plans to remain in his post through the end of the Trump administration, setting aside his deliberations about stepping down by the end of the year,” the New York Times reports.

“Mr. Barr had been weighing whether to leave this month. But President Trump — already angry with the attorney general’s refusal to help overturn the election — was said to be irritated with Mr. Barr’s contemplation of an early departure.”

“Unless President Trump’s Justice Department clears Hunter Biden of wrongdoing before leaving office, the new president will confront the prospect of his own newly installed administration deciding how or whether to proceed with an inquiry that could expose his son to criminal prosecution,” the New York Times reports.

“Already some Republicans are demanding a special counsel be appointed to insulate the case from political influence.”

“Attorney General William Barr has known about a disparate set of investigations involving Hunter Biden’s business and financial dealings since at least this spring and worked to avoid their public disclosure during the heated election campaign,” the Wall Street Journal reports.

“Republicans and President Trump have pressed Mr. Barr for months to pursue Mr. Biden, especially as his father, Joe Biden, gained momentum in his ultimately successful bid for president. Mr. Barr has staved off pressure from Republicans in Congress for information into the investigations, without elaborating on his actions.”

“The Trump administration is considering whether to pull back military support for the C.I.A., including potentially taking back much of the drone fleet the C.I.A. uses, according to current and former officials. The shift could sharply curtail the agency’s counterterrorism efforts that were greatly expanded after the Sept. 11, 2001, attacks,” the New York Timesreports.

Politico: The White House is making big changes at the Pentagon — but Biden can reverse them.

“A fallout between President Trump and Sen. Jim Inhofe (R-OK), chairman of the Senate Armed Services Committee, led to the breakthrough that resulted in the Morocco-Israel normalization deal,” Axios reports.

“Inhofe is one of Trump’s closest allies in the Senate and has asked the president over the last two years not to recognize Moroccan sovereignty in the Western Sahara… Relations between Trump and Inhofe soured about a week ago over the National Defense Authorization Act.”

“Ivanka Trump and Jared Kushner are currently in the final stages of purchasing a plot of land in an exclusive enclave nicknamed ‘billionaire bunker,’ near Miami Beach, Florida,” CNN reports.

“The lot, which is just shy of two acres and sits on Biscayne Bay, was listed at $31.8 million and the couple offered somewhere in the range of $28-30 million.”

“It’s not just the safety that drew Trump to Florida, it is the potential political opportunities of the state itself… Trump has not ruled out a near-future run for office, nor has she publicly denied she has political ambitions of her own.”

“Indoor dining will once again be barred in New York City restaurants starting on Monday, Gov. Andrew M. Cuomo announced on Friday, a significant reversal of the city’s reopening that comes as officials try to halt the escalation of a second wave of the coronavirus,” the New York Timesreports.

Andrew Cuomo: “Hospitalizations have not stabilized, and with a rising infection rate and NYC’s density, this means that indoor dining is too high of a risk.”

From an Orlando Sentinel editorial: “We apologize to our readers for endorsing Michael Waltz in the 2020 general election for Congress. We had no idea, had no way of knowing at the time, that Waltz was not committed to democracy.”

“During our endorsement interview with the incumbent congressman, we didn’t think to ask, ‘Would you support an effort to throw out the votes of tens of millions of Americans in four states in order to overturn a presidential election and hand it to the person who lost, Donald Trump?’”

Atlanta Mayor Keisha Lance Bottoms (D) was offered — and declined — the Ambassadorship to the Bahamas, the New Yorker reports.

“Lloyd Austin will begin courtesy calls with Congress next week, but his nomination to be Defense secretary may not even make it out of committee unless Republicans help grant the waiver he needs to hold the job,” Axios reports.

“While civil rights groups are hailing Austin’s nomination to be the first Black Defense secretary, some Democrats on the Senate Armed Services Committee have already said they oppose the waiver, leaving it up to Republicans to rescue him — and some predict the vote will fail in committee.”