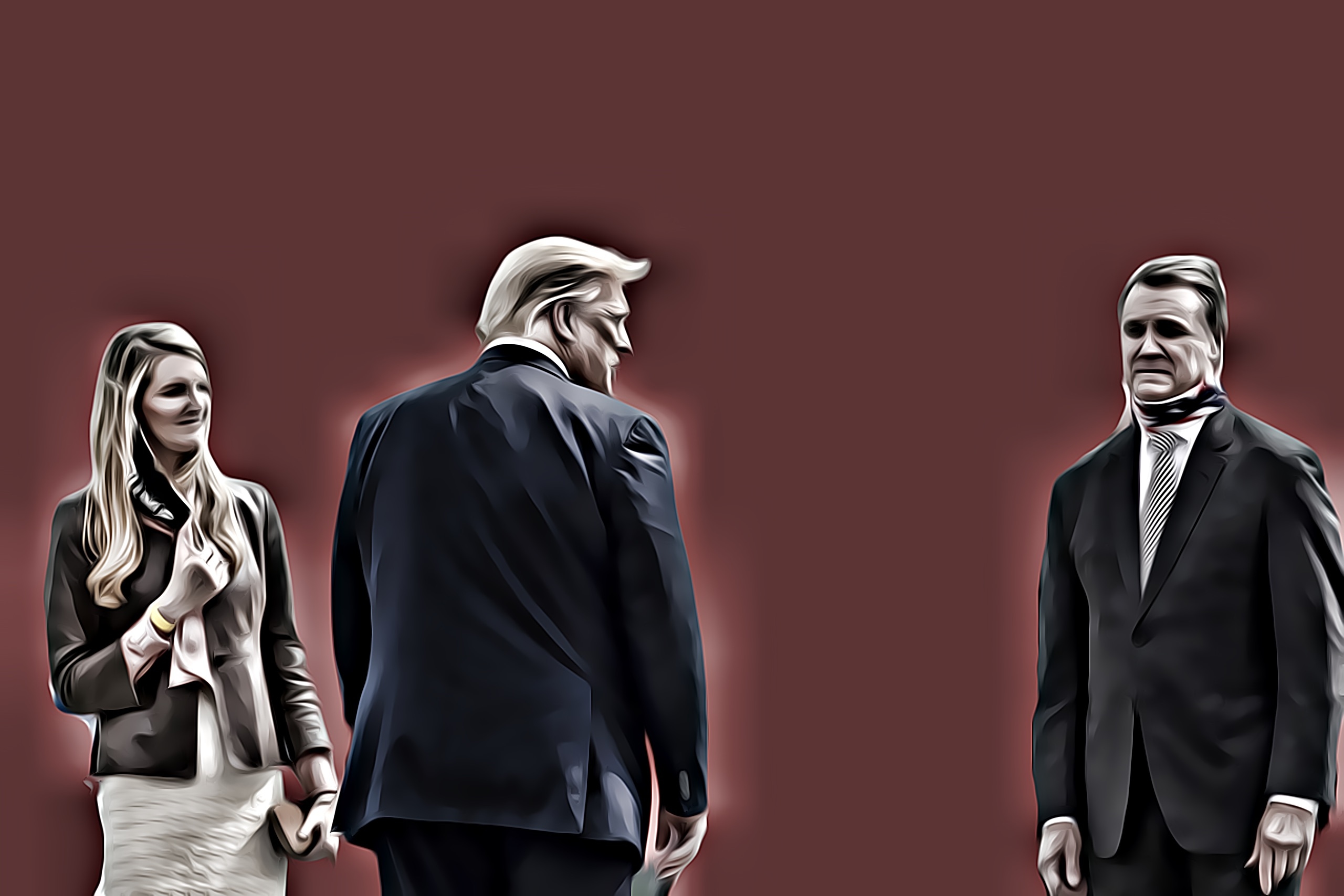 President Trump tweeted that his legal team will be joining the election case that Texas Attorney General Ken Paxton (R) is attempting to bring to the U.S. Supreme Court against the states of Georgia, Michigan, Pennsylvania and Wisconsin.

Said Trump: “This is the big one.”

Meanwhile, the Atlanta Journal Constitution reports Sens. Kelly Loeffler (R-GA) and David Perdue (R-GA), who each face a Senate runoff election in January, put their names to a statement saying they “fully support” the complaint which seeks to throw out Georgia’s vote.

“The Supreme Court of Nevada rejected an appeal late Tuesday from President Donald Trump’s campaign to overturn the election results in the state, affirming President-elect Joe Biden’s win in one of the battleground states that gave him overall victory,” Reuters reports.

“Madness. This is madness. We have a process. Recounts are appropriate. Going to the court is appropriate. Pursuing every legal avenue is appropriate. But trying to get electors not to do what the people voted to do is madness.” — Sen. Mitt Romney (R-UT), quoted by The Hill, on Republican efforts to challenge the electoral vote.

“If I would say to you, ‘I don’t want to do it,’ I’d get my house bombed tonight.” — Kim Ward, the Republican majority leader of the Pennsylvania Senate, quoted by the New York Times, on being asked to sign a letter calling for the state’s electoral votes to be thrown out.

Wall Street Journal: “Republicans worry that disillusioned backers of President Trump, convinced the system is rigged against them, in large part because of the president’s own pronouncements, will stay home. Democrats are wringing their hands over whether suburban and urban voters, motivated in November by the desire to oust Mr. Trump, will declare mission accomplished and not return to the polls on Jan. 5.”

“Both parties are conducting what they describe as enormous voter turnout operations—not only because so much is at stake for both sides, but because they’re fretting about turning out their own people when Mr. Trump is not on the ballot. So far, campaigns and outside groups are on track to spend more than $415 million on television and radio advertising, the most ever for a Georgia runoff.”

First Read: “With the news that President-elect Biden has selected Rep. Marcia Fudge to be his HUD secretary, it’s worth noting that House Democrats will have the barest of majorities next year when the new Congress convenes.”

“As of right now, the 2020 elections have reduced the Democratic majority to 222 seats. And with Fudge and Rep. Cedric Richmond departing for jobs in the Biden administration, that number will decline to 220 – just two more seats than a majority of a full Congress (218). Now there will be special elections for the Fudge and Richmond seats, but they could take months before there’s a winner in these heavily Democratic districts.”

“And here’s what could be worrisome for Democrats: If Biden picks more House Dems to serve in his administration, or if other Democrats in the House resign or pass away, the party could potentially lose its majority.”

Donald Trump Jr. is featured in a new ad urging Georgians to get out and vote for Sens. David Perdue (R-GA) and Kelly Loeffler (R-GA) in the January 5 runoff.

Trump Jr. responds: “There it is. The radical left wants to tear down everything we’ve accomplished –- defunding the police, eliminating private health insurance and dismantling the Supreme Court. On January 5, the U.S. Senate is on the line and my father’s accomplishments are on your ballot. Don’t let them take Georgia.”

“Terry McAuliffe (D), who mixed business-friendly politics with liberal social policies over four hard-charging years as Virginia governor, will announce Wednesday that he wants his old job back,” the Washington Post reports.

“A win would make McAuliffe only the second governor since the Civil War to make a comeback in Virginia, the lone state to bar its chief executive from serving back-to-back terms.”

Former Rep. David Jolly, a Republican-turned-independent who’s been a vocal Trump critic for years, says he’s considering a bid for Senate or governor as an independent. Jolly seems at least somewhat realistic about his chances, saying, “I do think we could mount a viable campaign. But viable and winning look very different and require a lot of money.”

At the same time, he seems to think that the one recent Florida election that featured a strong third-party candidate somehow bolsters his case. The Tampa Bay Times’ Steve Contorno reports that as “evidence of his path, Jolly points to the 2010 U.S. Senate race,” an open-seat contest in which Republican Marco Rubio defeated another Republican-cum-independent, then-Gov. Charlie Crist, 49-30, with Democratic Rep. Kendrick Meek taking just 20%. With Democrats certain to run a credible challenger of their own in 2022, it’s hard to understand why Jolly believes he could do any better against Rubio than Crist did.

Politico reports that ultra-wealthy Chicago Cubs co-owner Todd Ricketts is not “ruling out a run” for governor, per a “source close to” Ricketts. It’s not clear exactly how rich Ricketts himself is, but Forbes estimates the Ricketts family’s net worth at $3 billion. That fortune was built by patriarch Joe Ricketts, Todd’s father, who built the online trading powerhouse now known as TD Ameritrade.

Most of the family has been heavily involved in Republican politics. The elder Ricketts has long been a major GOP donor and conservative activist, in particular through his super PAC, the anti-earmarks Ending Spending Fund. Todd Ricketts became the RNC’s finance chair in 2018 and his oldest brother, Pete, is governor of Nebraska. His sister, Laura, however, is an LGBTQ rights activist and a top giver to Democratic campaigns.

Regarding possible bids against either of the two top Illinois Democrats up for election in 2022, Sen. Tammy Duckworth and Gov. J.B. Pritzker, Republican Rep. Adam Kinzinger tells Politico, “I never rule anything out.” Not only would Kinzinger be an underdog in either race, however, given the state’s heavily Democratic lean, he’d also likely face a difficult primary, on account of his outspoken criticism of Donald Trump’s efforts to overturn the election—criticism that already has fellow Republicans gunning for him.

The Boston Herald reports that Somerville Mayor Joe Curtatone is considering seeking the Democratic nomination for governor in 2022. Curtatone has roundly criticized Republican Gov. Charlie Baker for not taking enough action to combat the coronavirus pandemic in Massachusetts, and while the mayor has been tightlipped when talking about his own electoral plans, he very much hasn’t ruled anything out. “That has not crossed my mind at all,” Curtatone told the Herald about a potential gubernatorial run, adding, “This isn’t the time to take political shots at anyone.”

Curtatone was first elected mayor of Somerville, which is located just north of Boston and includes part of Tufts University, in 2003, and he’s been mentioned as a prospective candidate for higher office for years. Curtatone himself notably spent months in 2013 thinking about a gubernatorial run but decided to stay put, while Baker ended up winning the office the following year. Curtatone is up for re-election next year, and while he could run for governor afterwards, Battenfeld writes that the mayor probably wouldn’t seek a sixth term if he decides to take on Baker.

Baker himself has not yet announced if he’ll run for a third term, though he began making preparations all the way back in 2019. A recent MassInc poll for the nonprofit The Barr Foundation found Baker with a strong 68-22 favorable rating in what is usually a very blue state, but there was one potential warning sign for the governor just below the surface: While Baker received an 81-13 score from Democrats, Republicans only gave Baker the thumbs up by a 54-40 margin.

South Dakota Gov. Kristi Noem (R) said that she “expects the road could be a little bit rough under the Biden administration with some of the policies that they’ve embraced,” KELO reports.

“Noem’s director of communications, Ian Fury, contacted KELO after this story was first published and said Noem was discussing a potential Biden administration and not recognizing Biden as the next president.”

Despite the pandemic, Virginia Republicans opted over the weekend to choose nominees for statewide office via a convention rather than a state-run primary, prompting one GOP candidate to make good on a threat to bolt the party and announce a bid for governor as an independent.

State Sen. Amanda Chase, known for her far-right views, had long opposed a convention and attacked the “Republican establishment elite” for favoring one, apparently in the belief that it would benefit the only other declared contender, former state House Speaker Kirk Cox.

The decision to forego a primary prompted some heated words from one potential candidate, outgoing Republican Rep. Denver Riggleman, who himself lost renomination at a convention earlier this year. The Virginia GOP “is a raging dumpster fire,” tweeted Riggleman, who late last month said that his interest in a bid had “diminished.” Presumably, his desire to seek the Republican nod is even lower now, though he’s also held out the possibility of running as an independent.