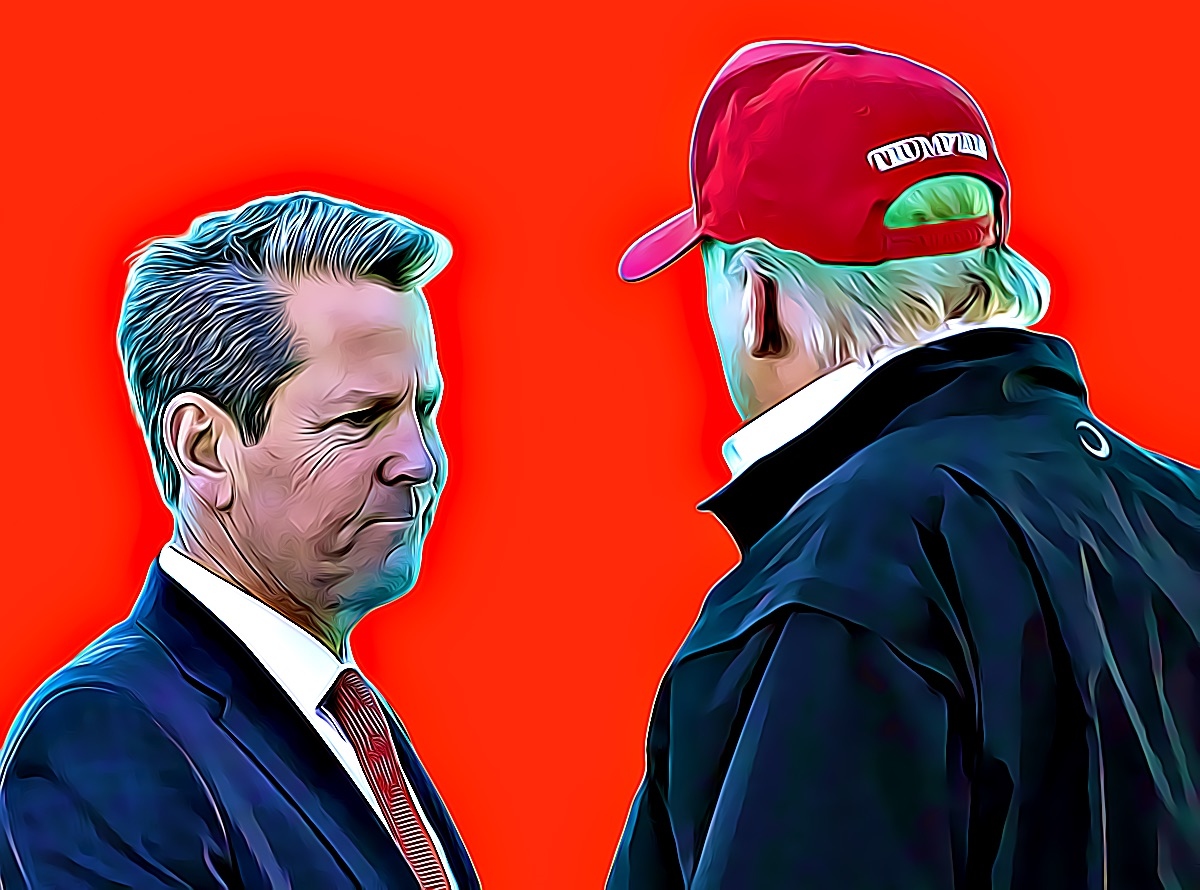 “President Trump called Georgia Gov. Brian Kemp (R) on Saturday morning to urge him to persuade the state legislature to overturn President-elect Joe Biden’s victory in the state and asked the governor to order an audit of absentee ballot signatures, the latest brazen effort by the president to interfere in the 2020 election,” the Washington Post reports.

“Hours before he is scheduled to hold a rally in Georgia on behalf of the state’s two GOP senators, Trump pressed Kemp to call a special session of the state legislature to get lawmakers to override the results and appoint electors that would back him… He also asked the governor to demand an audit of signatures on mail ballots, something Kemp has previously noted he has no power to do.

“Kemp declined the entreaty from Trump.”

President Trump called Georgia Gov. Brian Kemp (R) a “moron” and a “nut job” in a recent phone call with aides, sources have told CNN. The attacks against a fellow Republican raise fears that Trump could end up threatening chances of GOP Senate candidates in runoff.

The Washington Post surveyed all 249 Republicans in the House and Senate beginning the morning after Trump posted a 46-minute video in which he wrongly claimed he had defeated Joe Biden and leveled wild and unsubstantiated allegations of ‘corrupt forces’ who stole the outcome from the sitting president.

Just 25 Republican lawmakers said Biden was the winner, while two said Trump won. Another 222 were either unclear or would not answer. The newspaper has since updated the count to 27 Republicans.

President Trump demanded to know who the Republican lawmakers were who acknowledged President-elect Joe Biden as the winner of the presidential election when they were asked by the Washington Post.

“President Trump and his allies faced a crush of defeats in post-election litigation Friday, a further sign of their ongoing failure to overturn President-elect Joe Biden’s victory through the courts and to gain traction through baseless claims of widespread fraud,” the Washington Postreports.

“Judges ruled decisively that Trump’s side has not proved the election was fraudulent, with some offering painstaking analyses of why such claims lack merit and pointed opinions about the risks the legal claims pose to American democracy.”

Wrote Justice Brian Hagedorn of the Wisconsin Supreme Court: “The relief being sought by the petitioners is the most dramatic invocation of judicial power I have ever seen.”

“But the lawsuits keep coming and coming. They make much more sense when one thinks of them as about grift and delegitimizing the upcoming Biden presidency.”

Ross Douthat: “Anyone familiar with his career could have predicted that he would claim to have been cheated out of victory. Anyone watching how he wielded power (or, more often, didn’t) as president could have predicted that his efforts to challenge the election results would be embarrassing, ridiculous and dismissed with prejudice in court. And anyone watching how the Republican Party dealt with his ascent could have predicted that its leaders would mostly avoid directly rebuking him, relying instead on the inertial forces of American democracy, the conscientiousness of judges and local officialdom, and Trump’s own incompetence to turn back his final power grab.”

“So far, so predictable. But speaking as a cynical observer of the Trump era, one feature of November did crack my jaded shell a bit: not his behavior or the system’s response, but the sheer scale of the belief among conservatives that the election was really stolen, measured not just in polling data but in conversations and arguments, online and in person, with people I would not have expected to embrace it.”

Rep. Jim Clyburn (D-SC), one of President-elect Joe Biden’s most influential allies, is pushing hard for Jaime Harrison to be the next chairman of the Democratic National Committee, Politico reports.

New Mexico Gov. Michelle Lujan Grisham (D) is on the verge of acknowledging just how grim the pandemic has become, telling the Washington Post she will soon allow hospitals to move to “crisis standards,” a move that frees them to ration care depending on a patient’s likelihood of surviving.

The Atlantic: “The pandemic nightmare scenario—the buckling of hospital and health-care systems nationwide—has arrived. Several lines of evidence are now sending us the same message: Hospitals are becoming overwhelmed, causing them to restrict whom they admit and leading more Americans to needlessly die.”

“The current rise in hospitalizations began in late September, and for weeks now hospitals have faced unprecedented demand for medical care. The number of hospitalized patients has increased nearly every day: Since November 1, the number of people hospitalized with COVID-19 has doubled; since October 1, it has tripled.”

“The Trump administration has refused to allow members of President-elect Joe Biden’s transition team to meet with officials at U.S. intelligence agencies that are controlled by the Pentagon, undermining prospects for a smooth transfer of power,” the Washington Post reports.

“The officials said the Biden team has not been able to engage with leaders at the National Security Agency, the Defense Intelligence Agency and other military-run spy services with classified budgets and global espionage platforms.”

“Two years before she’d become the breakout star of the clown show Rudy Giuliani brought to Lansing this week, Mellissa Carone was sending her then-boyfriend’s ex-wife graphic videos of the two of them having sex,” Deadline Detroit reports.

“The most probable cause of a series of mysterious afflictions that sickened American spies and diplomats abroad in the past several years was radiofrequency energy, a type of radiation that includes microwaves, the National Academies of Sciences, Engineering, and Medicine has concluded in a report,” the New York Times reports.

“The conclusion by a committee of 19 experts in medicine and other fields cited ‘directed, pulsed radiofrequency energy’ as ‘the most plausible mechanism’ to explain the illness, which came to be known as Havana syndrome, though they said secondary factors may have contributed to symptoms.”

“I think the long term impact of this could be devastating… It’s important to be outspoken. That’s why I decided to put this on the line. We’ve lost our moral authority to be outraged. When you end up where principles don’t matter, beliefs don’t matter, it’s just about who can be the loudest and kind of maintain power through raw anger and aggression, you’re no different than a lot of Latin American countries at that point.” — Rep. Adam Kinzinger (R-IL), telling Politico  that the Republican Party has lost its way.

“A more combative Ivanka Trump has emerged with little more than one month left in her role as adviser to President Donald Trump, as the first daughter makes a conscious effort to publicly push back on her critics,” CNN reports.

“According to a source familiar with her thinking, Ivanka Trump recognizes there is a time stamp on the administration and she’s spent the last several weeks highlighting on social media the causes she feels she has impacted during her tenure, as well as showing hints she is ready for a fight.”

Top U.N. officials said that next year is shaping up to be a humanitarian catastrophe and rich countries must not trample poor countries in a “stampede for vaccines” to combat the coronavirus pandemic, Reuters reports.

New York Times: “A $908 billion plan would fall short of doing everything that economists argue Congress should do to help workers and businesses during the coronavirus pandemic. But they said that if lawmakers could get the details right, Congress should do it anyway.”

“Thousands of undocumented immigrants brought to the United States as children are immediately eligible to apply for an Obama-era program that grants them work permits, a federal judge in New York ruled Friday,” the Washington Post reports.

“U.S. District Judge Nicholas G. Garaufis in Brooklyn said he was fully restoring the eight-year-old Deferred Action for Childhood Arrivals, or DACA, program to the days before the Trump administration tried to end it in September 2017. He ordered the Department of Homeland Security to post a public notice by Monday to accept first-time applications and ensure that work permits are valid for two years.”