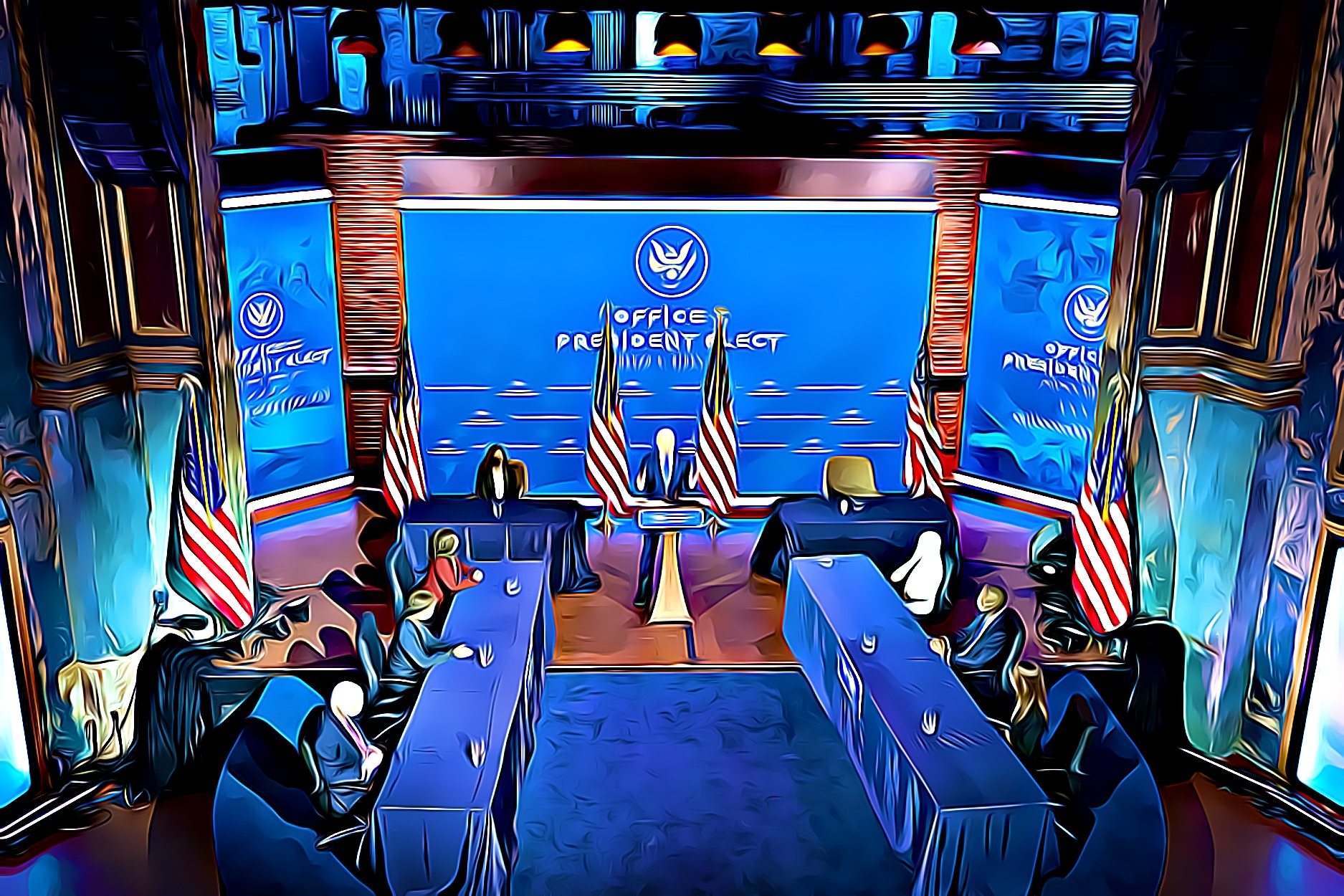 “Transition co-chair and former Obama administration official Jeff Zients is set to serve as the White House’s Covid-19 coordinator and Vivek Murthy, the former U.S. surgeon general under Obama, will return to that role, but with a broader portfolio that will include serving as the top medical expert and public face of the work.”

President-elect Joe Biden told CNN that he has asked Dr. Anthony Fauci to be a chief medical adviser and part of his Covid-19 response team when his administration begins next year.

“Los Angeles Mayor Eric Garcetti issued an order for residents to stay at home, warning that the city is approaching a ‘devastating tipping point’ in its fight against Covid-19 that would overwhelm the hospital system,” Bloomberg  reports.

New York Times: “The data show how the coronavirus pandemic, which is peaking in many states, is bringing with it unusual patterns of death, higher than the official totals of deaths that have been directly linked to the virus.”

“Deaths nationwide were 19 percent higher than normal from March 15 to Nov. 14. Altogether, the analysis shows that 345,000 more people than normal have died in the United States during that period, a number that may be an undercount since recent death statistics are still being updated.”

The New York Times has a very cool interactive tool that allows you to see where you will be in the line to get the vaccine, considering variables such as your age, county of residence, preexisting and at-risk conditions.

Rhode Island Gov. Gina Raimondo (D) ruled out leaving her job to become President-elect Joe Biden’s health and human services secretary, seeking to put the idea to rest after a flurry of reports that she was a finalist for the job, WPRI reports.

“President-elect Joe Biden has officially selected Brian Deese, who played a leading role in bailing out the automotive industry and negotiating the Paris climate agreement under President Barack Obama, to head the National Economic Council,” the New York Times reports.

“The appointment, which does not require Senate confirmation, highlights Mr. Biden’s plans to use economic policy initiatives to drive climate policy. It also defies pre-emptive criticism from some environmental groups, who have targeted Mr. Deese for his work in recent years as the sustainability director for asset-management giant BlackRock.”

“The official serving as President Trump’s eyes and ears at the Justice Department has been banned from the building after trying to pressure staffers to give up sensitive information about election fraud and other matters she could relay to the White House,” the AP reports.

“Heidi Stirrup, an ally of top Trump adviser Stephen Miller, was quietly installed at the Justice Department as a White House liaison a few months ago. She was told within the last two weeks to vacate the building after top Justice officials learned of her efforts to collect insider information about ongoing cases and the department’s work on election fraud.”

President Trump and Attorney General William Barr had a “contentious,” lengthy meeting inside the West Wing this week after Barr told The Associated Press that the Justice Department had uncovered no evidence of fraud that would change the election outcome, CNN reports.

“President Trump said Thursday he is disappointed in Attorney General Bill Barr for saying that the Justice Department had no uncovered evidence of widespread fraud in the 2020 election,” The Hill reports.

Said Trump: “He hasn’t done anything, so he hasn’t looked. When he looks he’ll see the kind of evidence that right now you are seeing in the Georgia senate. They are going through hearings right now in Georgia and they are finding tremendous volumes. So, they haven’t looked very hard. Which is a disappointment, to be honest with you, because it’s massive fraud.”

New York Times: “By late 2018, regular viewers of cable news would come to know Ms. [Jenna] Ellis as a ‘constitutional law attorney’ — her preferred title — who aggressively came to Mr. Trump’s defense as he faced investigation and impeachment. But a review of her professional history, as well as interviews with more than a half-dozen lawyers who have worked with her, show that Ms. Ellis, 36, is not the seasoned constitutional law expert she plays on TV.”

“Since she graduated law school in 2011, nothing in her record in the courtroom — limited mostly to appearances in state court as a prosecutor or as counsel for clients charged with assault, prostitution, theft and domestic abuse — shows any time spent litigating election law cases. She holds herself out as an expert on the Constitution based on her self-published book and her teaching of pre-law classes to undergraduates.”

“Former Presidents Barack Obama, George W. Bush and Bill Clinton are volunteering to get their Covid-19 vaccines on camera to promote public confidence in the vaccine’s safety once the US Food and Drug Administration authorizes one,” CNN reports.

“A series of cyberattacks is underway aimed at the companies and government organizations that will be distributing coronavirus vaccines around the world, though it is unclear whether the goal is to steal the technology for keeping the vaccines refrigerated in transit or to sabotage the movements,” the New York Times reports.

“Nestled in the mountains along the border between China and Kazakhstan, a remote rural county conceals an appalling secret: a high-tech, rapidly growing mass internment camp for the area’s Muslim minorities, capable of detaining thousands of people,” BuzzFeed Newsreports.

“The compound in China’s Mongolküre County, which has been under construction since 2017, is mostly hidden from the outside world. It has even been edited out of much of the satellite imagery that appears on China’s Baidu Maps. But through interviews with former detainees and an in-depth architectural analysis of the site’s development, BuzzFeed News can reveal the true nature of this secretive facility — from its crowded cells where detainees were forbidden from gazing out the window to its solitary confinement rooms — and open its walls to scrutiny.”

Senate Majority Leader Mitch McConnell (R-KY) said Thursday that he has seen “hopeful signs” toward Congress striking a coronavirus stimulus deal before the end of the year, CNBC reports.

Said McConnell: “Compromise is within reach. We know where we agree. We can do this.”

“With a fresh presidential pardon still warm, former national security advisor Michael Flynn has called on Donald Trump to suspend the constitution and declare martial law for the military to run a new election,” The Independent  reports.

“Advocates and lawyers anticipate a flurry of clemency action from President Donald Trump in the coming weeks that could test the limits of presidential pardon power,” the AP reports.

“Trump is said to be considering a slew of pardons and commutations before he leaves office, including potentially members of his family, former aides and even himself. While it is not unusual for presidents to sign controversial pardons on their way out the door, Trump has made clear that he has no qualms about intervening in the cases of friends and allies whom he believes have been treated unfairly, including his former national security adviser, Michael Flynn.”

“Joe Biden is facing dueling headwinds as he looks to fill out his Cabinet: Senate Republicans want the President-elect to consult with them and choose nominees who could win their support, while liberal Democrats are pushing him to name progressives who could shape the policies of his government,”  CNN reports.

“And Republicans, if they keep control of the chamber, are not committing to scheduling votes on nominees they consider out of the mainstream, nor are they vowing to quickly let Biden’s picks get confirmed in the first days of his administration despite the private and public lobbying by top Democrats.”

Ivanka Trump sat for a deposition Tuesday with investigators from the Washington, DC, attorney general’s office as part of its lawsuit alleging the misuse of inaugural funds, CNN reports.

Get used to it, Honey. New York Attorney General Letitia James (D) has vowed to continue her office’s investigation into President Trump’s businesses that are based in the state, according to Westchester Business Journal.

“President Trump’s determined effort to exclude undocumented immigrants from the 2020 census has been thwarted at every turn — by the courts, the coronavirus, the Constitution, and now by the clock,” The Week reports.

“Census Bureau documents released Wednesday by Democrats on the House Oversight Committee suggest that the final apportionment count won’t be delivered to the president until at least Jan. 23, three days after President-elect Joe Biden takes office, because of at least 15 data anomalies affecting more than a million census records.”

“The Biden administration will take over the executive branch on Jan. 20, but the new president won’t have a Democratic majority on an independent commission that holds significant sway over one of his top priorities, a cleaner electric grid,  until after June 30,” Roll Call reports.

“That’s because the Senate this week approved by voice vote a bipartisan pair of Trump administration nominees to the Federal Energy Regulatory Commission — which oversees energy markets, the electric grid, natural gas pipelines and large power projects like wind farms — leaving it with a 3-2 Republican majority until June 30, when the term of Neil Chatterjee, a GOP commissioner, expires.”

“The second-ranking Senate Democrat threw his support behind a proposal that would force him to give up a powerful subcommittee post overseeing the Pentagon budget, a peace offering amid a heated internal reckoning after the caucus came up short of expectations in a fourth straight election,” the Washington Post reports.

“The potential ascension of Sen. Richard J. Durbin (Ill.), the Democratic whip for the past 16 years, to the top post on the Judiciary Committee — as chairman or ranking minority member, depending on the outcome of Georgia’s Jan. 5 Senate elections — set off a broader debate about the power accumulated by senior Democrats.”

“The Trump administration is racing to sell oil drilling rights in the Arctic National Wildlife Refuge before Joe Biden takes office so the president-elect can’t revoke the contracts,” Bloomberg reports.

“The Interior Department announced Thursday it will hold the auction on Jan. 6 — an accelerated timetable meant to ensure the oil and gas leases are formally issued before Biden is sworn in Jan. 20. Biden has vowed to permanently protect the refuge, but formal leases are contracts with the federal government and are difficult to cancel.”