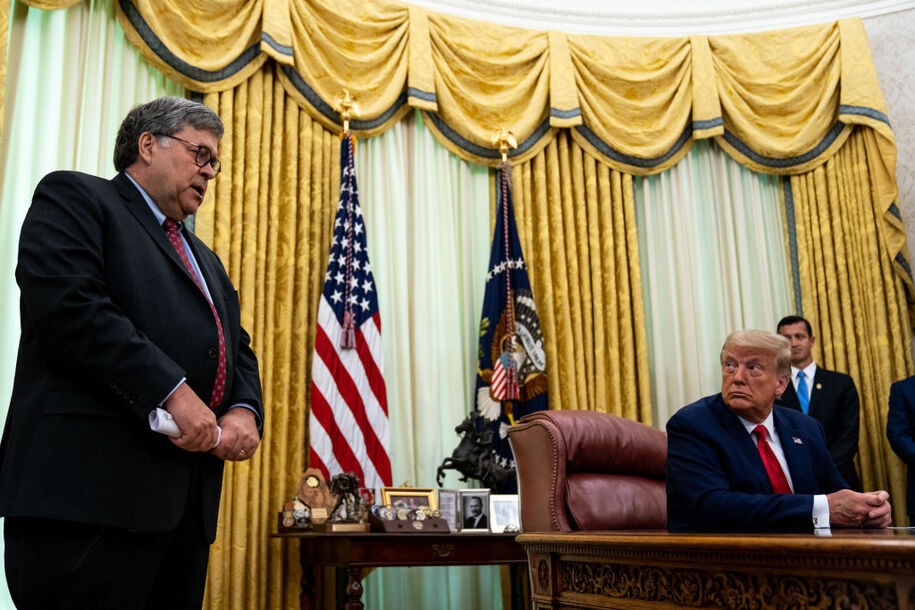 Axios: “It’s a direct repudiation of President Trump’s baseless claims of a ‘rigged’ election from one of the most loyal members of his Cabinet.”

“Rudy Giuliani, President Trump’s lawyer who has led the most extensive efforts to damage his client’s political rivals and undermine the election results, discussed with the president as recently as last week the possibility of receiving a pre-emptive pardon before Mr. Trump leaves office,” the New York Times reports.

“Mr. Giuliani’s potential criminal exposure is unclear. He was under investigation as recently as last summer by federal prosecutors in Manhattan for his business dealings in Ukraine and his role in ousting the American ambassador there, a plot that was at the heart of the impeachment of Mr. Trump.”

The Fix: Here’s who a lame-duck Trump could pardon.

“President Trump has discussed with advisers whether to grant pre-emptive pardons to his children, to his son-in-law and to his personal lawyer Rudolph W. Giuliani, and talked with Mr. Giuliani about pardoning him as recently as last week,” the New York Times reports.

“Mr. Trump has told others that he is concerned that a Biden Justice Department might seek retribution against the president by targeting the oldest three of his five children — Donald Trump Jr., Eric Trump and Ivanka Trump — as well as Ms. Trump’s husband, Jared Kushner, a White House senior adviser.”

ABC News reports that “it’s not clear how this kind of preemptive pardon would work, given that no member of the Trump family has been accused of a federal crime. However sources pushing for this action say the argument is an ‘insurance policy’ against concerns that the incoming Biden administration could undertake politically motivated investigations.”

Fox News host Sean Hannity called for President Trump to pardon himself and his family prior to leaving the White House on January 20.

Said Hannity; “The president out the door needs to pardon his whole family and himself, because they want this witch hunt to go on in perpetuity. They’re so full of rage and insanity against the president… I assume that the power of the pardon is absolute, and that he should be able to pardon anybody that he wants to.”

President Trump’s campaign lawyer and former U.S. Attorney Joe diGenova said that fired Trump cybersecurity chief Chris Krebs should be executed for saying that the election was the “most secure in United States history,” The Bulwark reports.

Said DiGenova: “Anybody who thinks the election went well, like that idiot Krebs who used to be the head of cybersecurity for Trump. That guy is a class A moron. He should be drawn and quartered. Taken out at dawn and shot.”

“President Trump is discussing possibly launching a 2024 campaign to retake the White House on Inauguration Day and skipping the swearing-in of his successor,” NBC News reports.

“Regardless of the timing of a campaign announcement, Trump is not expected to attend the inauguration of President-elect Joe Biden… He also does not plan to invite Biden to the White House or even call him.”

The Justice Department is investigating a potential crime related to funneling money to the White House in exchange for a presidential pardon, according to a court record unsealed by the chief judge of the DC District Court, CNN reports.

“Attorney General William Barr has given extra protection to the prosecutor he appointed to investigate the origins of the Trump-Russia probe, giving him the authority of a special counsel to complete his work without being easily fired,” the AP reports.

“Barr said that he had appointed U.S. Attorney John Durham as a special counsel in October under the same federal statute that governed special counsel Robert Mueller in the original Russia probe.”

“A first-rate team that’s going to get us through this ongoing economic crisis and help us build the economy back, not just build it back, but build it back better than before… Our message to everybody struggling right now is help is on the way.”  — President-elect Joe Biden, quoted by CBS News, while introducing his economic team.

Biden announced Tuesday that the chair of the Council of Economic Advisers would have a seat on his Cabinet, The Hill reports. Biden described Cecilia Rouse, his pick for CEA chair, as “one of the most distinguished economists in the country.”

Politico: “With Sen. Dianne Feinstein (D-CA) stepping down as the top Democrat on the committee in the next Congress, Senate Minority Whip Dick Durbin (D-IL) and Sen. Sheldon Whitehouse (D-RI) are both vying to succeed her. Senate Minority Leader Chuck Schumer (D-NY) is staying neutral on the matter so far.”

“But Durbin’s bid to be both whip and the top Democrat on Judiciary has spurred a broader debate within the caucus over how much power individual senators should accumulate.”

Neil Irwin: “For the first time since the pandemic shuttered the economy eight months ago, the end is in sight.”

“The development of vaccines that appear to be safe, effective and ready for wide distribution in the months ahead means it’s now possible to envision a post-Covid economy by summer.”

“There is a distinct possibility that the economy could roar back to full health quickly as soon as public health conditions allow. But for that to happen, the United States will need to make it through what might be a cold, dark winter in which damage could be done to the tissue of the economy that prevents that rapid healing.”

“A bipartisan group of senators is expected to unveil an approximately $908 billion stimulus proposal on Tuesday, aiming to break a months-long partisan impasse over providing emergency federal relief to the U.S. economy,” the Washington Post reports.

Jay Powell, the Federal Reserve chairman, has warned Congress that the rise in coronavirus cases could “prove challenging for the next few months” even as encouraging news on vaccine development has boosted the outlook for the economy in the medium-term, the Financial Timesreports.

The Fed chairman stressed that the economic outlook remained “extraordinarily uncertain” — a phrase he has used throughout the pandemic.

“President Trump’s pardon of his former national security adviser, Michael Flynn, includes an extremely broad reprieve from any possible crimes he might have committed connected to special counsel Robert Mueller’s two-year investigation of Russian interference in the 2016 election,” Politico reports.

Trump’s pardon absolves Flynn of “any and all possible offenses” arising from Mueller’s investigation, as well as any related grand jury proceedings.

“Despite what President Trump is tweeting and saying publicly in the wake of Arizona and Wisconsin certifying President-elect Joe Biden’s victory Monday, Trump sees the scoreboard and understands he has no chance of hanging on to the presidency,” CNN reports.

Asked whether the President realizes that he’s been defeated, a close adviser who has been in contact with Trump said: “Yes, he does.”

“White House Chief of Staff Mark Meadows has summoned FDA commissioner Stephen Hahn to the West Wing for a 9:30am meeting Tuesday to explain why he hasn’t moved faster to approve the Pfizer coronavirus vaccine,” Axios reports.

Hahn issued a preemptive statement: “Let me be clear — our career scientists have to make the decision and they will take the time that’s needed to make the right call on this important decision.”

Playbook: “It’s too early to declare Tanden’s nomination to be the director of OMB dead, but man, is she taking a lot of incoming. Sen. John Cornyn (R-TX) said Tanden is ‘radioactive,’ and said it was a ‘misstep’ by the Biden team to plan to nominate her. Sen. John Thune (R-SD) — the No. 2 Senate Republican — said she’s been very ‘partisan’ in her assessment of Republican senators, who will now have to vote for her. “I’m not, you know, disqualifying anybody, but I do think that it gets a lot harder obviously if they send folks from their, you know, progressive left that are kind of out of the mainstream. And, but, you know, if and when the time comes, we’ll obviously hopefully be able to consult with them and then, if they send people here that are qualified, give them a fair process.”

“Sen. Lindsey Graham (R-SC) — the likely chair of the Budget Committee should Republicans keep the majority — suggested that Tanden may not even get a committee vote.”

CNN: “Inside his transition team, there is a real recognition of how difficult it would be to choose a Senate Democrat for any role, given how closely divided the upper chamber will be next year.”

“And the narrowing Democratic majority in the House has made it far less likely that he would be able to easily turn to any House members for posts in the administration.”