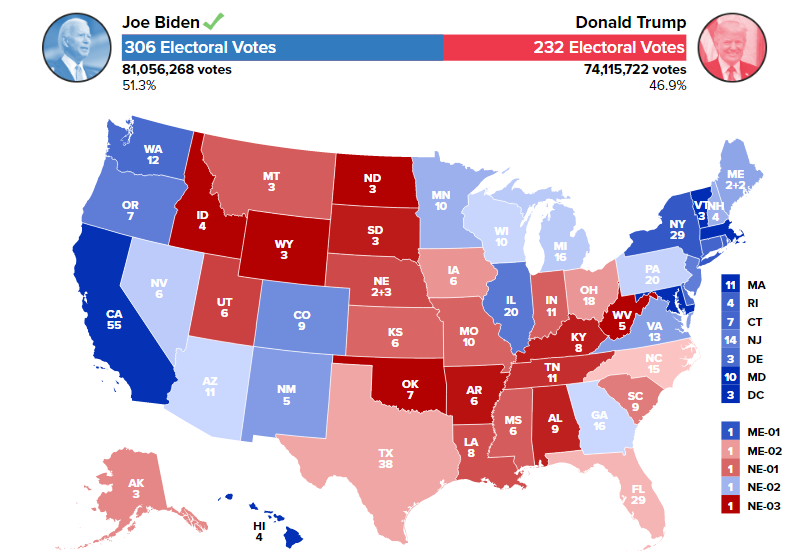 “President Trump’s allies said Tuesday they have asked the U.S. Supreme Court to block a decision by Pennsylvania’s highest court dismissing a challenge of the state’s mail-in voting system,” the Washington Post reports. Yeah, the Court won’t even take the case.

A witness in Sidney Powell’s new Michigan lawsuit challenging President Trump’s loss in the state says in a declaration he thinks there’s something fishy about election returns in Edison County, Michigan.

Bridge Michigan notes one problem: There is no Edison County in Michigan.

Sen. Lisa Murkowski (R-AK) told CNN that President Trump should concede the White House race to President-elect Joe Biden. Said Murkowski: “I think he should concede. I think the race is over.”

“Some establishment Republicans are sounding alarms that President Trump’s conspiratorial denials of his own defeat could threaten the party’s ability to win a Senate majority and counter President-elect Joe Biden’s administration,” the AP reports.

“The concerns come ahead of Trump’s planned Saturday visit to Georgia to campaign alongside Sens. David Perdue and Kelly Loeffler, who face strong Democratic challengers in Jan. 5 runoffs that will determine which party controls the Senate at the outset of Biden’s presidency.”

“President Trump’s sustained assault on his own party in Georgia, and his repeated claims of election fraud in the state, have intensified worries among Republicans that he could be hurting their ability to win two crucial Senate runoff races next month,” the New York Times reports.

“The president has continued to claim without evidence that his loss in the new battleground state was fraudulent, directing his ire in particular at Gov. Brian Kemp and Secretary of State Brad Raffensperger, both conservative Republicans, whom he has accused of not doing enough to help him overturn the result.”

Politico: Republicans to Trump: Georgia fraud claims could cost us the Senate.

President Trump teased running again for president in 2024 as he hosted a holiday reception at the White House on Tuesday evening, the APreports.

Said Trump: “It’s been an amazing four years. We’re trying to do another four years. Otherwise, I’ll see you in four years.”

Politico: “Trump has been privately telling advisers for weeks that he’s pondering a 2024 campaign, and some close to him think he could announce a bid in the immediate weeks ahead. But Tuesday appears to mark the first time outside those private conversations that he’s spoken about seeking a return to the White House.”

Jonathan Chait: “White women voted for Trump. Or so you have probably heard. In the immediate aftermath of Donald Trump’s 2016 victory, the finding from early exit polls that 53 percent of white women voted for Trump formed the basis for a million social-media posts, op-eds, and rally placards. That this “fact” is not true is not even close to the biggest problem with its ubiquitous place in progressive social-justice discourse.”

“The 53 percent figure turned out to be erroneous, and corrected analyses eventually pegged Trump’s share of the white female electorate closer to 47 percent. Nonetheless, the impulse that propelled so many writers to blame white women for electing Trump proved strong enough to survive even after the factual basis was undercut. Indeed, left-wing opinion writers continued churning out polemics based on the erroneous 53 percent figure for years.”

Said Obama: “You lost a big audience the minute you say it, which makes it a lot less likely that you’re actually going to get the changes you want done.”

Joshua Green: “Many Democrats have spent the weeks since the election bickering about who’s to blame for a result that ousted President Trump but also saw the party fall short in its efforts to gain strength in Congress and statehouses.”

“The debate has obscured one area of unquestionable Democratic success: In the four years since Trump’s election, progressives have built an organizing and fundraising behemoth, which just delivered a record 80 million votes for President-elect Joe Biden. Democrats’ fortunes in the Biden era and beyond will hinge on whether they can maintain and grow this juggernaut.”

“A New York county reported on Tuesday that 55 early voting ballots had been discovered, potentially changing the outcome of a congressional race separated by only 12 votes,” The Hill reports.

“According to WBNG reporter Josh Rosenblatt, these votes have the potential to keep Rep. Anthony Brindisi (D-NY) in office as representative for New York’s 22nd district, or give the election to Republican challenger Claudia Tenney.”

Rep. Mark Walker (R-NC) announce he’ll run for the Senate in a race that may end up becoming the most hotly contested and expensive Senate battle in the 2022 midterm elections, Fox News reports.

“Walker is the first candidate to launch a campaign in the race to succeed retiring three-term Republican Sen. Richard Burr. But it’s doubtful he’ll be the only Republican to declare his or her candidacy. The president’s daughter-in-law, Lara Trump, is mulling a bid for the Senate in the state where she was born and raised.”

Quinta Jurecic: “Donald Trump will not serve a second term. The litigation launched by his campaign and the Republican Party to overturn the election results has no chance of preventing Joe Biden from swearing the oath of office on January 20—as Trump himself seemed to haltingly recognize last week after his administration finally allowed the presidential transition to begin.”

“But even though the worst has not come to pass, Trump and his team are doing lasting damage to American democracy as the president struggles to come to grips with the reality of his loss. And yet, these lawyers and officials will likely face no real consequences for their actions—and if they do, those repercussions will not be enough to address the scale of the problem.”

“President Trump’s political operation has raised more than $150 million since Election Day, using a blizzard of misleading appeals about the election to shatter fundraising records set during the campaign,” the Washington Post reports.

“The influx of political donations is one reason Trump and some allies are inclined to continue a legal onslaught and public affairs blitz focused on baseless claims of election fraud, even as their attempts have repeatedly failed in court and as key states continue to certify wins for President-elect Joe Biden.”

New York Times: “Instead of slowing down after the election, Mr. Trump’s campaign has ratcheted up its volume of email solicitations for cash, telling supporters that money was needed for an ‘Election Defense Fund.’ In reality, the fine print shows that the first 75 percent of every contribution currently goes to a new political action committee that Mr. Trump set up in mid-November, Save America, which can be used to fund his political activities going forward, including staff and travel. The other 25 percent of each donation is directed to the Republican National Committee.”

“During a recent donor call, the minority leader lamented being unable to successfully recruit Stacey Abrams to run for a Senate seat in Georgia.”

Stuart Rothenberg: “Republicans are already sounding as if they intend to make 2022 about socialism, illegal immigrants and anarchists in the suburbs. But if the economy is strong, COVID-19 is in the rear-view mirror and Biden is popular, the midterm election might well favor the status quo.”

“Though House Republicans have reasons for optimism, nothing is now guaranteed about the political landscape of 2022 — especially since a bitter, defeated Trump is likely to want the limelight during the next few years.”

Ron Brownstein: “The silence of congressional Republican leaders as President Trump’s unfounded claims of election fraud grow wilder and more venomous increasingly resembles the party’s deference to Sen. Joe McCarthy during the worst excesses of his anti-Communist crusade in the early 1950s.”

“In McCarthy’s era, most of the GOP’s leaders found excuses to avoid challenging conspiracy theories that they knew to be implausible, even as evidence of their costs to the nation steadily mounted. For years, despite their private doubts about his charges and methods alike, the top GOP leadership — particularly Senate Republican leader Robert A. Taft, the Mitch McConnell of his day — either passively abetted or actively supported McCarthy’s scattershot claims of treason and Communist infiltration.”

“A significant faction of Senate Republicans didn’t join with Democrats to curb McCarthy’s power until the senator immolated himself with his accusations, in highly publicized 1953 and 1954 hearings, that the Army was riddled with Communists during the presidency of fellow Republican Dwight Eisenhower.”

Said one Republican close to Trump: “I think he will have more trouble than he can begin to imagine. No one is going to let him have a free pass in the primary.”

He added: “The only question left open is whether the media will give up their addiction to him or not — that will determine a great deal.”