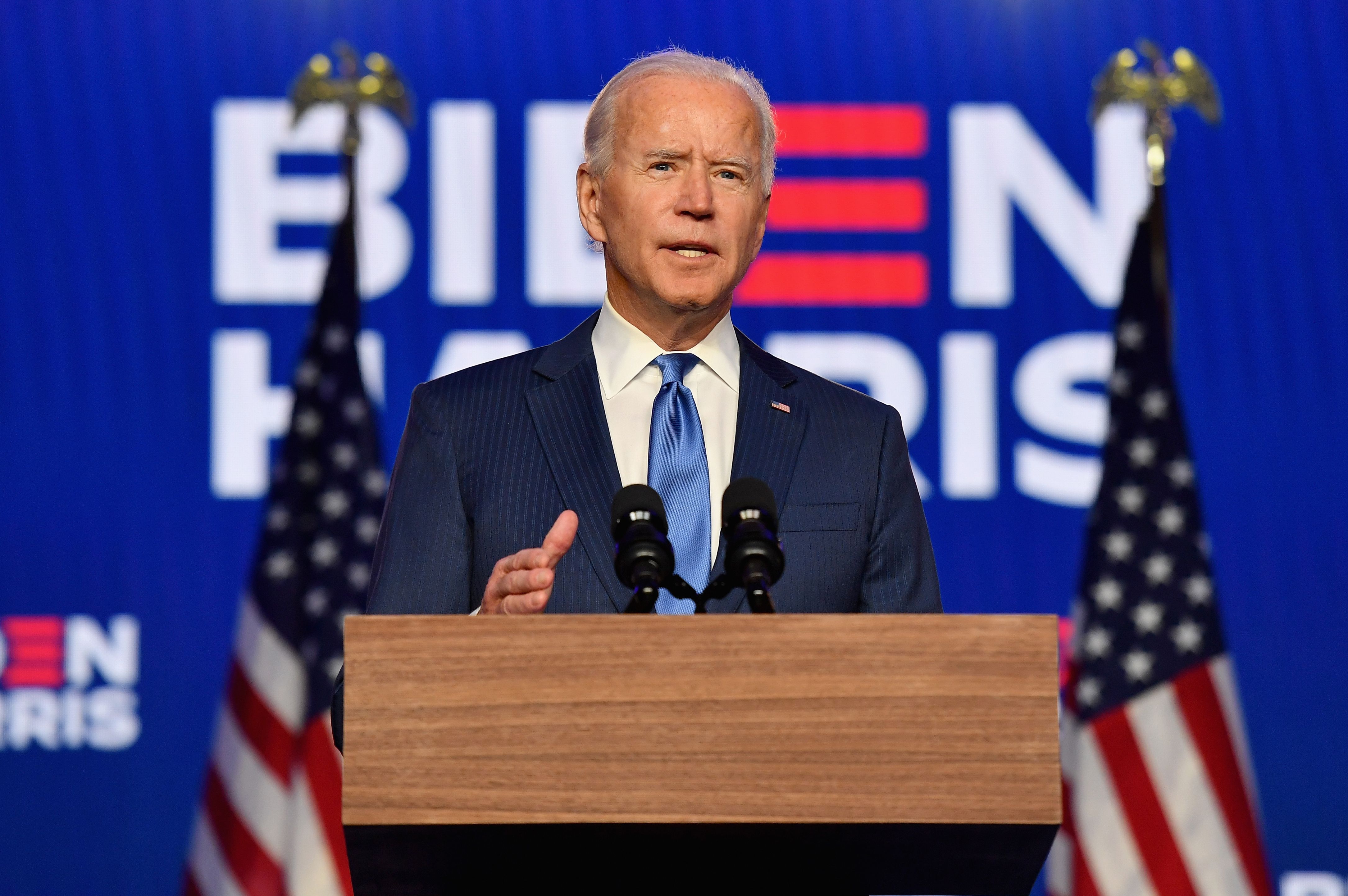 President-elect Joe Biden is still weighing who will lead the Central Intelligence Agency, but Tom Donilon is no longer under consideration for the post, CNN reports.

A spokesperson for Sen. John Cornyn (R-TX) tweeted that Neera Tanden, President-elect Joe Biden’s reported pick to head the Office of Management and Budget, has “no chance” of being confirmed by the Senate should Republicans remain in control next year.

“President-elect Joe Biden twisted his ankle playing with his one of his dogs over the holiday weekend, an injury that his doctor said on Sunday resulted in hairline fractures in his foot that would most likely require him to wear a walking boot for several weeks,” the New York Times reports.

President Trump reposted on Twitter video of Biden leaving the doctor’s office on Sunday, and added, “Get well soon!”

“The Trump administration is shunting to the states hard decisions about which Americans will get the limited early supplies of coronavirus vaccines — setting up a confusing patchwork of distribution plans that could create unequal access to the life-saving shots,” Politico reports.

“Federal and state officials agree that the nation’s 21 million health care workers should be first in line. But there is no consensus about how to balance the needs of other high-risk groups, including the 53 million adults aged 65 or older, 87 million essential workers and more than 100 million people with medical conditions that increase their vulnerability to the virus.”

“It’s not just the Senate majority on the line in Georgia’s runoffs. It’s also Joe Biden’s chance to reshape the courts,” Politico reports.

“Should Senate Republicans win the fight to keep their majority, Senate Majority Leader Mitch McConnell will have unilateral authority to stifle Biden’s picks to the federal judiciary, weakening Democrats’ hopes to make up for four years of confirming conservative judges and two years of a McConnell blockade during President Barack Obama’s final years.”

“President-elect Joe Biden on Monday [received] his first presidential daily briefing since winning the 2020 election after the Trump administration delayed approving the transition process,” NBC News reports. “The report, which Vice President-elect Kamala Harris is also scheduled to receive, is a classified document outlining high-level intelligence and analysis on a range of national security issues.”

“The U.S. Supreme Court seemed wary on Monday of approving President Trump’s plan to exclude undocumented immigrants from the census figures that are used to calculate each state’s representation in Congress and share of billions of dollars from a host of federal programs,” NBC News reports.

“But it was unclear after 90 minutes of oral argument exactly how the court would deal with the issue given that the Census Bureau concedes it has no idea yet how many people would be excluded or when it will have the answer.”

First Read: “Over the Thanksgiving holiday alone (Thursday through Sunday), the United States saw more than 600,000 new coronavirus cases and nearly 5,000 deaths. And health experts say it’s about to get worse — even with distribution of vaccines now in sight.”

National Review: “Trump’s most reprehensible tactic has been to attempt, somewhat shamefacedly, to get local Republican officials to block the certification of votes and state legislatures to appoint Trump electors in clear violation of the public will. This has gone nowhere, thanks to the honesty and sense of duty of most of the Republicans involved, but it’s a profoundly undemocratic move that we hope no losing presidential candidate ever even thinks of again.”

“Getting defeated in a national election is a blow to the ego of even the most thick-skinned politicians and inevitably engenders personal feelings of bitterness and anger. What America has long expected is that losing candidates swallow those feelings and at least pretend to be gracious. If Trump’s not capable of it, he should at least stop waging war on the outcome.”

Financial Times: “The hit squad behind last week’s deadly attack on the man long thought to be the mastermind of Iran’s alleged military nuclear programme left nothing to chance.”

“As nuclear scientist Mohsen Fakhrizadeh’s black Nissan sedan car approached a boulevard in the Damavand region, about 60km from the capital Tehran, an automatic machine gun, installed inside a blue pick-up truck parked under an electric transmitter, began firing.”

“The pick-up truck, packed with explosives, was then detonated by remote control.”

The Atlantic: “When Julián Castro wasn’t given a speaking slot at the Democratic National Convention in August, he complained that Joe Biden’s campaign wasn’t showing proper respect to Latino voters. The real explanation for the snub is much simpler: The former housing secretary and presidential candidate had implied that Biden was senile in a primary debate and then didn’t endorse him until June, though the primary race had been over since April, when Bernie Sanders dropped out.”

“Anita Dunn, a senior adviser to the Biden campaign from the start, declined to comment on what happened with Castro. (An aide to Castro insisted he offered to endorse in April, but the Biden campaign sat on that, and an offer for advice on Latino outreach.) But keeping track of who crosses Biden—staff, reporters, politicians—is part of what she does. She watches. She listens. She remembers. She is completely comfortable with giving a firm no.”

Said Dunn: “As Biden will be the first to say, he’s the only Irishman who doesn’t carry a grudge. I’m not Irish, but I will carry his grudges.”

Playbook: “This may be the only full week both the House and Senate will be in D.C. for the lame-duck session of Congress. And the backdrop is grim: The pandemic is hitting its height, the economy is showing some signs of struggle, and society is, again, being tested.”

“There are 11 days for Congress to put together a spending bill — either an omnibus or stopgap measure — to avert a shutdown during the last month of Donald Trump’s presidency. While Republicans and Democrats have agreed to the top-line numbers, there remain significant details to be negotiated. There is also increased pressure from lawmakers in both parties to include economic stimulus measures like the Paycheck Protection Program in the spending bill even if a broader consensus over state and local funding can’t be reached. Look for lawmakers to publicly call on their leaders not to adjourn until that happens.”

“A bipartisan group of senators is trying to jump-start stalled coronavirus stimulus talks during the lame duck, with congressional leaders still at odds over providing more relief as cases and deaths spike ahead of the coming winter,” Politico reports.

“The effort is an uphill battle given the entrenched positions of Majority Leader Mitch McConnell and his GOP conference and Speaker Nancy Pelosi and Senate Minority Leader Chuck Schumer. So whatever this collection of senators can achieve is likely to be modest, if they can accomplish anything at all.”

“President-elect Biden is strongly considering Rahm Emanuel to run the Department of Transportation, weighing the former Chicago mayor’s experience on infrastructure spending against concerns from progressives over his policing record,” Axios reports.

“The DOT could effectively become the new Commerce Department, as infrastructure spending, smart cities construction and the rollout of drone-delivery programs take on increasing economic weight.”

Pennsylvania state Sen. Doug Mastriano (R) abruptly left a West Wing meeting with President Trump after being informed he had tested positive for the coronavirus, the AP reports.

The European Union is seeking to forge a new alliance with the United States to bury the tensions of the Trump era and meet the challenges posed by China, the Financial Times reports. The plan proposes rebuilding ties with common fronts on issues from digital regulation to tackling the COVID-19 pandemic.

A new Pew Research poll finds Americans and Germans heading into 2021 with divergent opinions on transatlantic alliance: 74% of Americans continue to say that relations between the two countries are good. At the same time, 79% of Germans say the relationship is in poor shape.

New York Times: “Mr. Biden’s campaign, concerned over any possible perception of foreign meddling in the presidential election — or any comparison to Russian interference on President Trump’s behalf in 2016 — has ordered its high command to refuse nearly all conversations with foreign officials or members of Washington’s diplomatic corps.”

“That has left the emissaries along Washington’s Embassy Row to woo Mr. Biden’s informal and unpaid political advisers, or lawmakers who are close to him, for any crumb of information that might be spilled during the gossip swapping that is the lubricant of their lavish parties and quiet soirees.”