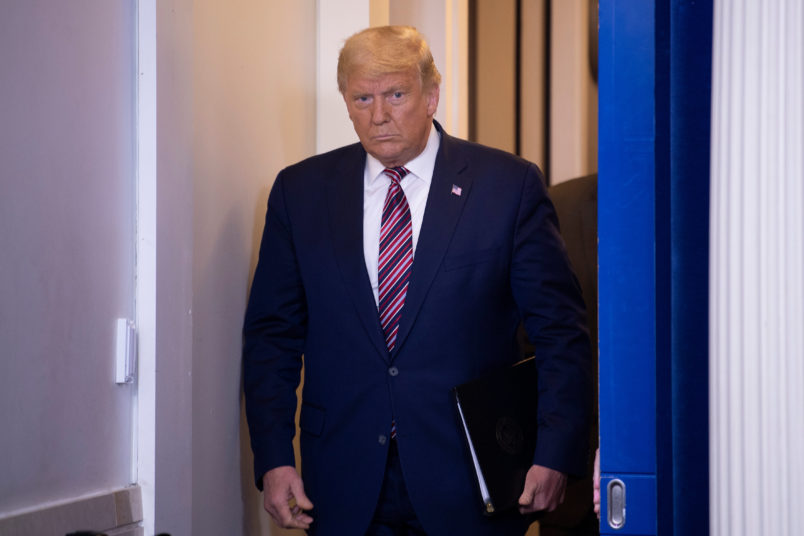 “A federal appeals court on Friday handed another loss to the Trump campaign’s effort to undo President-elect Joe Biden’s win in Pennsylvania, with a judge — one of Trump’s nominees — writing that the campaign’s ‘claims have no merit,’” BuzzFeed News reports.

“In a 3-0 decision, the US Court of Appeals for the 3rd Circuit rejected the campaign’s effort to get a do-over of its lawsuit challenging the election results in Pennsylvania, which a lower court had already tossed out last week.”

Axios: “It’s another devastating blow to President Trump’s sinking efforts to overturn the results of the election.”

Rick Hasen: “This is an utter repudiation of the Trump campaign’s ridiculous lawsuit by three Republican-appointed judges.”

“It shows the absurdity of the litigation: besides the fact that the case was poorly lawyered — Rudy Giuliani’s oral argument was the worst I have heard in 25 years of following election law cases.”

“A nominee for Pentagon chief was noticeably absent when the president-elect rolled out his national security team Tuesday. Flournoy had been widely seen as the likely pick, but Axios is told other factors — race, experience, Biden’s comfort level — have come into play.”

“When Israeli Prime Minister Benjamin Netanyahu flew into Saudi Arabia last weekend for a secret nighttime rendezvous with Saudi Crown Prince Mohammed bin Salman, he and his allies in Washington hoped to win assurances that a normalization deal between the two longtime Middle East rivals was in reach,” the Wall Street Journal reports.

“But Prince Mohammed pulled back from a deal, according to the Saudi advisors and U.S. officials, largely because of the U.S. election result. Saudi aides said the prince, eager to build ties with the incoming administration of President-elect Joe Biden, was reluctant to take the step now, when he could use a deal later to help cement relations with the new American leader.”

“He’s the only person I’ve ever met who can gaslight himself.” — Mary Trump, quoted by Vice News, on how President Trump has convinced himself he actually won the election.

“The Trump administration published an analysis Friday finding that its rule easing companies’ liability for killing birds would not cause significant environmental harm, clearing the way for it to finalize a major rollback before the president’s term ends on Jan. 20,” the Washington Postreports.

New York Times: “Republicans who had privately fretted about her demise offered hearty congratulations, professing to have always known she would survive. Senator Joe Manchin III, the centrist Democrat from West Virginia, reached out wanting to know how soon he could get a meeting with his fellow moderate to begin breaking through the impasse on a coronavirus relief package. And President-elect Joseph R. Biden Jr. made a brief call to congratulate a former Senate colleague and legislative ally whose vote he will badly need to push through his agenda and staff his administration.”

“The ring-kissing reflected the prime perch of Ms. Collins, who, after having survived the steepest re-election challenge of her career with a comfortable margin, has emerged more powerful than ever, poised for a fifth term in which her brand of bipartisan deal-making will be crucial.”

“The question is how Ms. Collins, who has long held sway as one of the few swing votes in a narrowly divided Senate, will use that power.”

Several members of the top federal advisory committee to the U.S. Department of Defense have been suddenly pushed out, multiple U.S. officials told Foreign Policy, in what appears to be the outgoing Trump administration’s parting shot at scions of the foreign-policy establishment.

“An Iranian scientist that Israel alleged led the Islamic Republic’s military nuclear program until its disbanding in the early 2000s was ‘assassinated’ Friday,” the AP reports.

“Israel declined to immediately comment on the killing of Mohsen Fakhrizadeh, who Israeli Prime Minister Benjamin Netanyahu once called out in a news conference saying: ‘Remember that name.’ Israel has long been suspected of carrying out a series of targeted killings of Iranian nuclear scientists nearly a decade ago.”

“It’s not just Michael Flynn. The White House is weighing a wave of pardons and commutations by President Trump in his final weeks in office, prompting jockeying by a range of clemency seekers and their representatives, including more allies of Mr. Trump,” the New York Timesreports.

“Among those hoping for pardons are two former Trump campaign advisers, Rick Gates and George Papadopoulos, who like Mr. Flynn, the former national security adviser who is already said to be in line for a pardon from Mr. Trump, were convicted in cases stemming from the special counsel’s Russia investigation.”

“The Labor Department’s report Wednesday said jobless claims climbed from 748,000 the week before. Before the virus struck hard in mid-March, weekly claims typically amounted to roughly 225,000,” the AP reports.

“What’s more, the intensifying pandemic is threatening to accelerate the pace of layoffs… Meanwhile, another economic threat looms: The impending expiration of two federal unemployment programs the day after Christmas could eliminate benefits for 9.1 million people.”

Politico: “President-elect Joe Biden will inherit one of the weakest labor markets in U.S. history… Yet many of the solutions he’s offering — massive infrastructure, clean energy and technology investments — will need the approval of a largely hostile Congress.”

Washington Post: “More Americans are going hungry now than at any point during the deadly coronavirus pandemic, according to a Post analysis of new federal data … Experts say it is likely that there’s more hunger in the United States today than at any point since 1998, when the Census Bureau began collecting comparable data about households’ ability to get enough food.”

“One in 8 Americans reported they sometimes or often didn’t have enough food to eat in the past week, hitting nearly 26 million American adults.”

President Trump is trying to rush through a proposed regulation that could see federal executions being carried out by firing squads again, the Daily Beast reports.

ProPublica: “Even as Trump and his allies officially refuse to concede the Nov. 3 election, the White House and federal agencies are hurrying to finish dozens of regulatory changes before Joe Biden is inaugurated on Jan. 20.”

“The rules range from long-simmering administration priorities to last-minute scrambles and affect everything from creature comforts like showerheads and clothes washers to life-or-death issues like federal executions and international refugees. They impact everyone from the most powerful, such as oil drillers, drugmakers and tech startups, to the most vulnerable, such as families on food stamps, transgender people in homeless shelters, migrant workers and endangered species.”