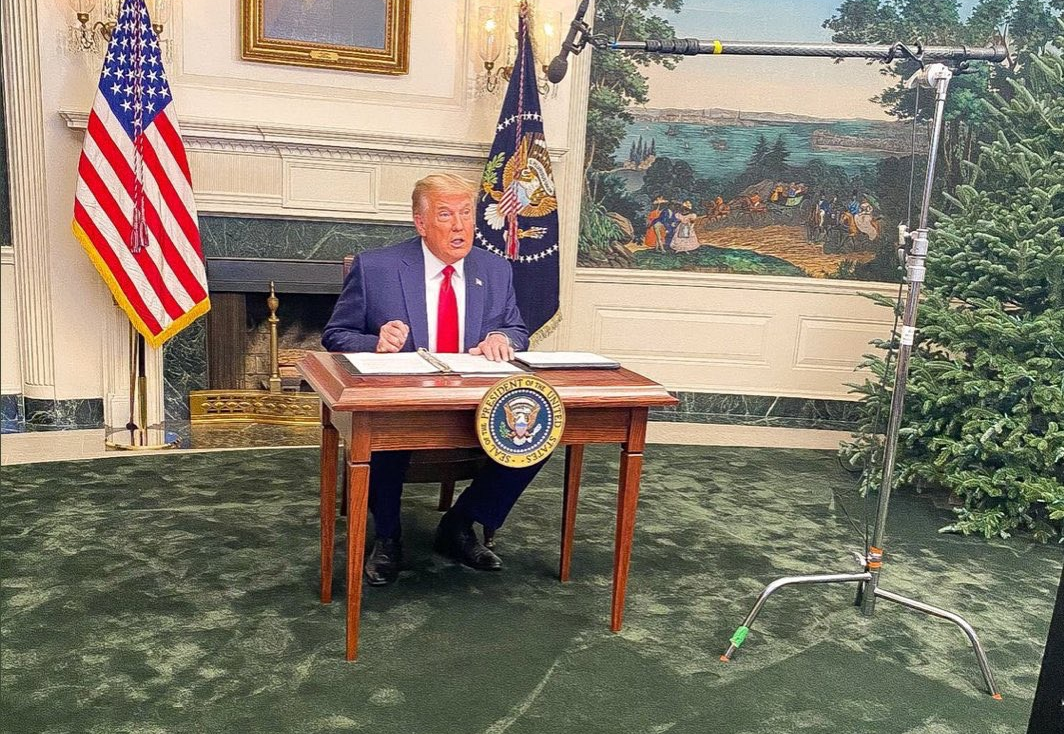 “President Trump said Thursday that he will leave the White House if the Electoral College formalizes President-Elect Joe Biden’s victory — even as he insisted such a decision would be a ‘mistake’ — as he spent his Thanksgiving renewing baseless claims that ‘massive fraud’ and crooked officials in battleground states caused his election defeat,” the AP reports.

“The fact that a sitting American president even had to address whether or not he would leave office after losing reelection underscores the extent to which Trump has smashed one convention after another over the last three weeks.”

Trump refused to say if he will attend President-elect Joe Biden’s inauguration, the HuffPost reports. Said Trump: “I know the answer to that, but I don’t want to say it yet.”

“In the now-distant Republican presidential primaries of 2016, Senator Ted Cruz of Texas handily won the Iowa caucuses. This was determined by a method that has lately come under attack but at the time was considered standard: elementary math,” the New York Times reports.

“One of the losers in Iowa, the developer and television personality Donald J. Trump, soon accused Mr. Cruz of electoral theft. He fired off several inflammatory tweets, including this foreshadowing of our current democracy-testing moment: ‘Based on the fraud committed by Senator Ted Cruz during the Iowa Caucus, either a new election should take place or Cruz results nullified.’”

“The episode vanished in the tsunami of political vitriol to come during the Trump presidency. Still, it reflects what those who have worked with Mr. Trump say is his modus operandi when trying to slip the humiliating epithet he has so readily applied to others. Loser.”

“The nomination of Lujan Grisham, 61, would continue a tradition of presidents tapping governors to lead the sprawling Department of Health and Human Services, and make her the first Latina ever nominated for the post. Murthy, a 43-year-old Yale-educated internist who’s grown close to Biden as a top adviser on the coronavirus pandemic, would be the first nominee of Indian descent for the department’s top job.”

“Either would face potentially tough confirmation hearings as the Biden administration begins coordinating one of the largest immunization programs in history — and confronts the economic fallout of a pandemic that’s left tens of millions of people out of work and uninsured. The next secretary will play a key role in managing the Covid-19 response, and convincing a fatigued and distrustful public to buy into the tough public health measures needed to suppress the virus.”

National Security Adviser Robert O’Brien was not given the warmest welcome during his trip to Vietnam last week, Bloomberg reports.

After a spate of COVID-19 infections were reported within the White House in recent weeks, O’Brien was reportedly confined to only one floor of his Hanoi hotel and treated like a “human Petri dish.”

“Foreign observers are watching with trepidation — and at times disbelief — as coronavirus cases surge across the United States, and masses of Americans are choosing to follow through with plans to visit family and friends for this week’s Thanksgiving holiday anyway,” the Washington Post reports.

New York Times: A somber holiday for the U.S. amid a record number of daily virus cases and deaths.

“President Trump phoned into a Pennsylvania state Senate hearing where his legal team was appearing as part of their shriveling legal battle against the election results,” NBC News reports.

“After calling his lawyers in the middle of the hearing — held at the Wyndham Hotel in Gettysburg, Pennsylvania — Trump launched a breathless, 10-minute long rant about election fraud during which he surfaced many his familiar false claims about dead people voting, illegal ballots, Democrats’ corruption and more.”

“History will record the shameful irony that a president who lied to avoid military service staged a bogus event on the hallowed grounds of Gettysburg in a brazen attempt to undermine the Republic for which scores of real patriots had fought and died to preserve since its founding.” — Former Pennsylvania Gov. Tom Ridge (R), on Twitter.

“The 5 to 4 order was the first show of solidified conservative strength on the court since the confirmation of Justice Amy Coney Barrett, whom President Trump chose to replace liberal Justice Ruth Bader Ginsburg following her death in September. The decision differed from the court’s previous practice of deferring to local officials on pandemic-related restrictions, even in the area of constitutionally protected religious rights.”

“He played down the impact of the ruling, suggesting that it was a reflection of the court’s emboldened new conservative majority.”

“Regardless of the governor’s interpretation, the decision by the Supreme Court late on Wednesday to suspend the 10- and 25-person capacity limitations on churches and other houses of worship in New York would seem to be a sharp rebuke to Mr. Cuomo, who had previously won a series of legal battles over his emergency powers.”

Pope Francis criticized groups protesting COVID-19 restrictions in a New York Times op-ed: “It is all too easy for some to take an idea — in this case, for example, personal freedom — and turn it into an ideology, creating a prism through which they judge everything.”

“The Israel Defense Forces have in recent weeks been instructed to prepare for the possibility that the U.S. will conduct a military strike against Iran before President Trump leaves office,” Axios reports.

“The Israeli government instructed the IDF to undertake the preparations not because of any intelligence or assessment that Trump will order such a strike, but because senior Israeli officials anticipate ‘a very sensitive period’ ahead of Biden’s inauguration on Jan. 20.”

John Barsa, the acting administrator of the United States Agency for International Development, told his senior staff that he has tested positive for coronavirus,  Axios reports. Staffers say Barsa rarely wears a mask in their office.

There’s a chance President Trump’s pardon of Michael Flynn could backfire some day, The Week reports. Trump’s pardon, which he announced in a tweet, means Flynn will theoretically no longer be protected from self-incrimination under the 5th Amendment should he ever be called to testify against Trump.

David Frum: “Here’s the first and most important thing to understand about the crime for which President Trump just pardoned former National Security Adviser Michael Flynn: Flynn did not lie to protect himself. He lied to protect Donald Trump…”

“From Flynn’s own narrow personal point of view, there was no reason to lie about any of these conversations. Yes, he was pushing the limits a little bit, doing diplomacy before the new administration took office. A more elegant diplomat would have found a way to honor the rule that there’s only one administration at a time, while also communicating what he wanted the Russians to know about the differing intentions of the incoming administration. But such limit-pushing has surely happened often before in the history of American foreign policy. All Flynn had to say to avoid legal jeopardy was, ‘Yes, I spoke to Ambassador Kislyak. Possibly I was premature. My bad.’”

Politico: “Trump’s move is an extraordinary intervention on behalf of an ally who pleaded guilty in 2017 and has spent the last two years fighting to overturn his original plea.”

Mark Osler: “President Trump’s announcement that he has pardoned Michael Flynn… is infuriating—and not merely because of the gross favoritism on display. What Trump has done once again is corrupt something that ought to be beyond corruption: the mercy that the most powerful person in the world can bestow upon those who are in chains.”

“The choice for the spymaster role is one of the toughest facing Biden as he puts together his national security team. The CIA has found itself uncomfortably embroiled in domestic politics under Donald Trump, accused by the outgoing president and his allies of seeking to tar him as an agent of Moscow and representing a “deep state” bent on undermining his policies. Whomever Biden picks will also confront an emboldened Russia and an increasingly aggressive China, along with transnational threats like climate change and pandemics.”

“President-elect Joe Biden is leaning towards naming former senior Obama administration official and current investment executive Brian Deese his top economic adviser in the White House, although pushback from the progressive wing of the Democratic Party could still derail the pick,” Politico reports.

Biden is also considering Roger Ferguson, former vice-chair of the Federal Reserve Board of Governors, for National Economic Council director, CNBC reports. He is also considering regulatory veteran Gary Gensler, who worked for both the Obama and Clinton administrations, for Deputy Treasury Secretary. Another name being floated for a top economic policy post is Kenneth Chenault, the former CEO of American Express.

Bloomberg: “Republican and Democratic lawmakers have reached an agreement on spending levels for the annual spending bill needed to keep the government open after current funding runs out Dec. 11, according to two congressional aides in both parties.”

Wall Street Journal: “In private conversations, he has polled advisers on what he should do next, musing about how he can stay relevant in the media and in the Republican Party and how he can earn money.”

“He has repeatedly expressed interest in running for president again in 2024, which some advisers have urged him to do as a way to save face, telling him he can decide whether to follow through later.”

Wall Street Journal: “In a West Wing where advisers have often loitered near the Oval Office in the hopes of being asked inside, there has been noticeably less angling among aides to get an audience with the president in recent weeks, administration officials said. Aides have said privately they are concerned that the president might ask them for something that would draw them into the legal battle.”